More than forty burgers were entered by twenty-nine Aquidneck Island restaurants in the ten-day contest. 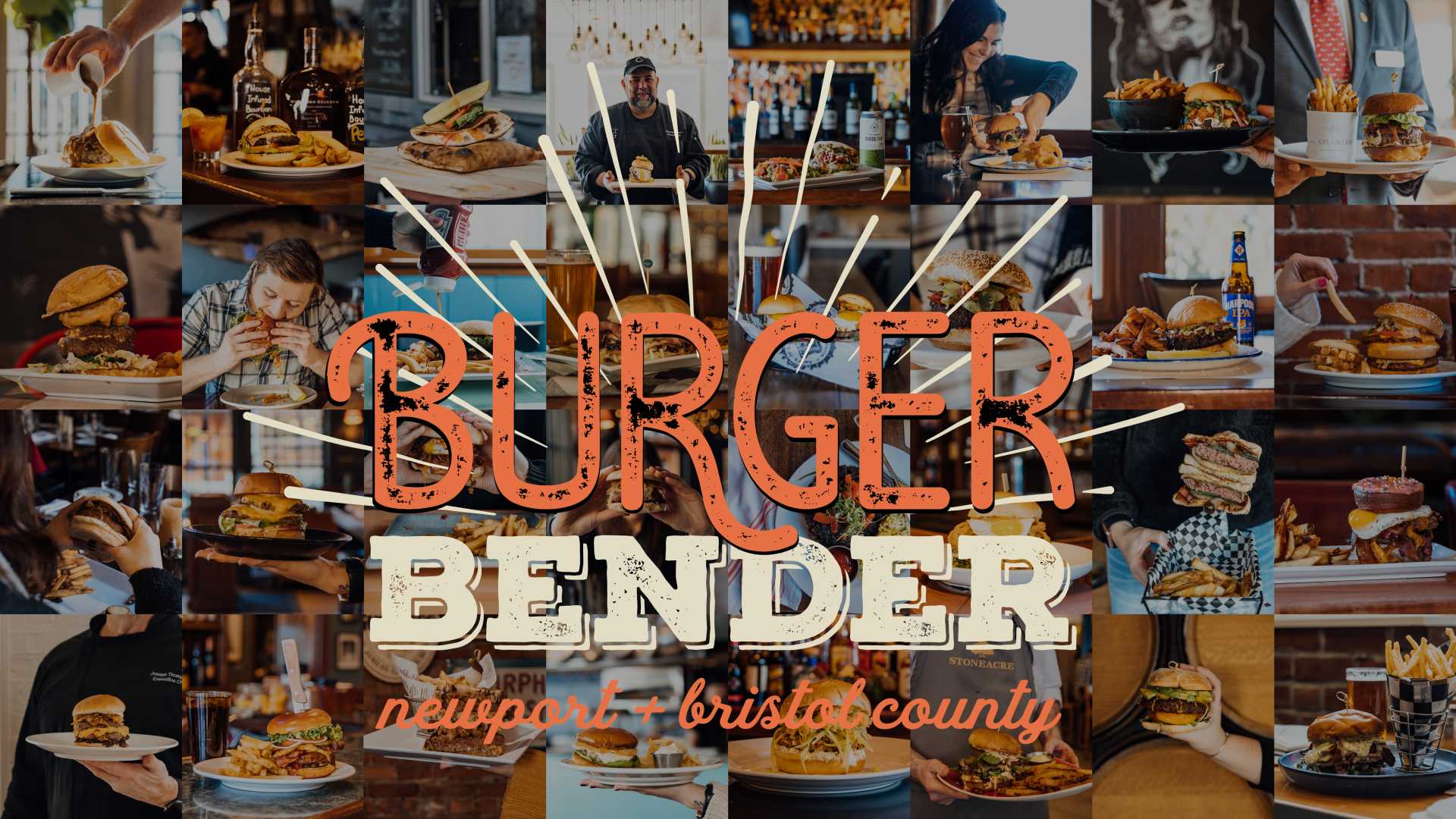 The Newport Burger Bender has finally announced the winners from the ten-day burger competition that took place from February 14 to 23, with more than forty burgers presented by twenty-nine Aquidneck Island restaurants. The general public voted for their favorites each day, and local food experts around the state also chose their top picks. Lastly, Discover Newport, which expertly organized the popular contest, also awarded a series of superlatives for top burger contenders.

For this year’s newly introduced non-beef burger category voted on by the public, the Grill at Forty 1° North walked away with the most votes for their vegan burger. How could it not with a house-made chickpea, roasted vegetable and quinoa patty, topped with vegan aioli and marinated grilled red onion, served on a sea-salt dusted caraway roll?

Best on Four Wheels went to Amano Pizza and Gelato for the Neapolitan Burger.

Most Instagrammable goes to the doughnut-topped Homer Burger from Brix Restaurant at Newport Vineyards.

Best Burger with a View went to The Dining Room at Castle Hill Inn for their French Onion Burger.

Most Napkins Needed was awarded to Jo’s American Bistro for the Crispy Pancetta Burger.

Most Likely to Skip School award goes to  Ferris “Burger’s” Day Off by Saltwater at the Newport Harbor Hotel.

Tallest Burger was awarded to the Buffalo Chicken Mac and Cheese Burger from Skiff Bar at the Newport Marriott.

Cutest Couple went to the Salmon Sliders from Scales & Shells.

Four Editor’s Choice Awards were also declared. Rhode Island Monthly’s own associate editor Jamie Coelho headed to Newport multiple times to help judge the contest, and chose her favorite for an Editor’s Choice Award, the B.G.B Burger from Mission. Coelho says, “I like that Mission put a twist on the traditional burger by adding some heat from jalapenos and pepper jack cheese, smokiness from roasted poblano peppers and bacon, and sweetness from dill pickles. Every bite was a combo of spicy, smoky, and sweet flavors with a mouthful of perfectly cooked, medium-rare, responsibly sourced beef patty. The sourdough bread, sliced in half, also held the whole thing together well so it didn’t become a goopy mess in my lap” 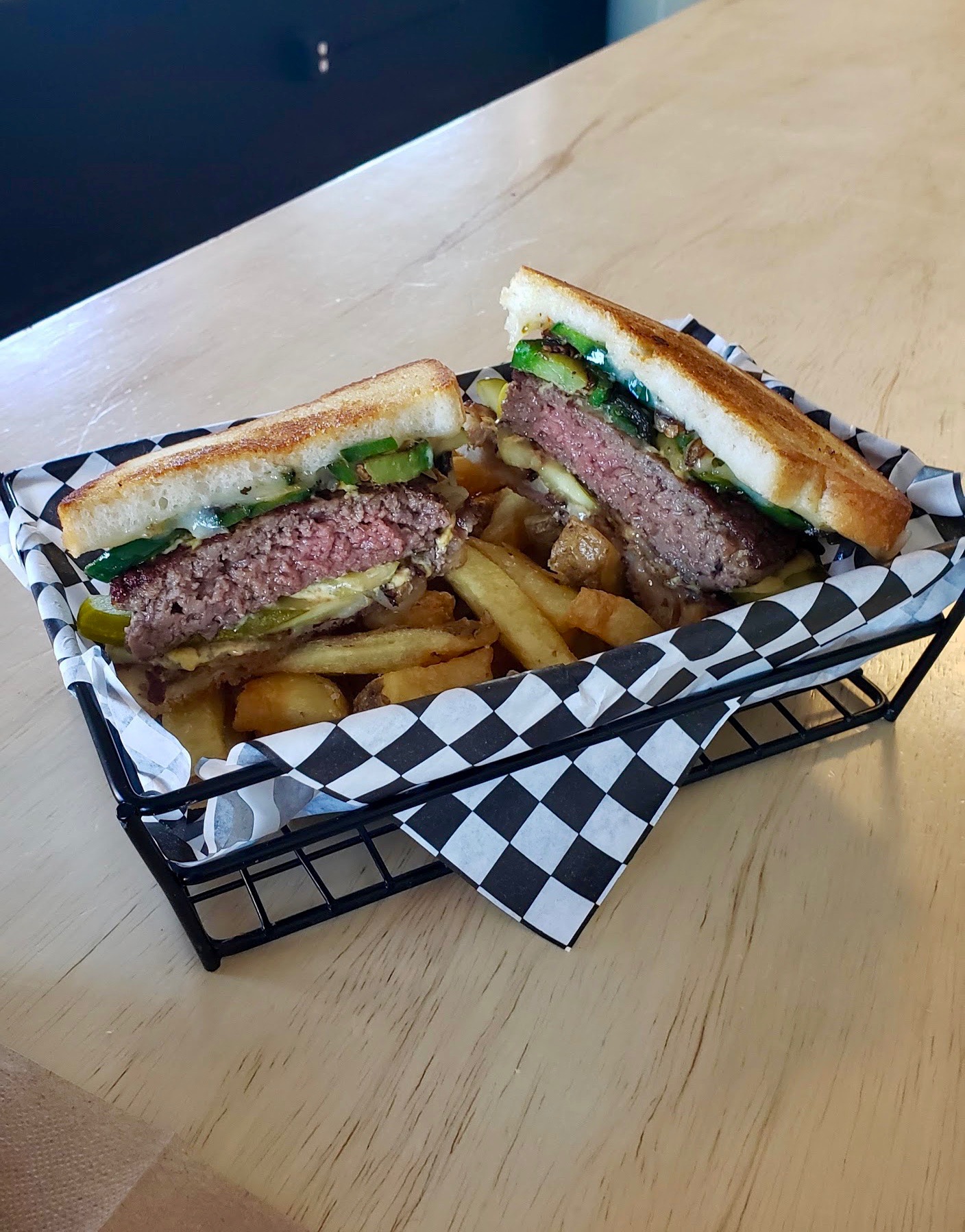 Other Editor’s Choice awards included a non-beef win for Forty 1° North‘s the Grill Vegan Burger given by Wendy Logan of Newport This Week. “It so beautifully represented the category, bursting with fresh bits of veggies but substantive via the red lentils, chickpeas and steel cut oats,” she says. “It was seasoned to perfection and contrasted beautifully with the pickled salad side. Total texture-flavor bomb.”

The “Most Instagrammable” winner, Brix’s the Homer Burger, also won an Editor’s Choice Award from Rachael Thatcher, food writer and digital producer at The Newport Daily News. The Homer Burger is a quarter pound-beef patty, topped with bacon, a fried egg and served on two brioche glazed doughnuts. “I have to go with the Homer Burger from Brix. While it was over the top and outrageous, that’s exactly what won me over. Every ingredient was well thought out and made in house, and the attention to detail when it came to each individual element made for the perfect end result,” Thatcher says. “Not to mention it was simply fun to eat. When it comes to the Burger Bender, I feel like you have to go big or go home, and chef Andy Texiera went big with this one.”

Finally, Ryan Belmore, publisher and editor of What’s Up Newp and What’s Up Rhode Island, and staff also awarded an Editor’s Choice award to Surf Club for the California Double, which included two seared patties on a grilled roll, with American cheese, lettuce, tomato and a special sauce. “Surf Club’s California Burger wasn’t the biggest or boldest and it didn’t reinvent the wheel, however it was well-executed, nostalgic and simply put, wonderfully delicious!” Belmore said. “Among three of us from What’s Up Newp checking out burgers over the last 10 days, that was by far our favorite collectively.”