The Eagle Super Market sign glows again at the new burgers and beer restaurant in one of Providence's hottest food neighborhoods. 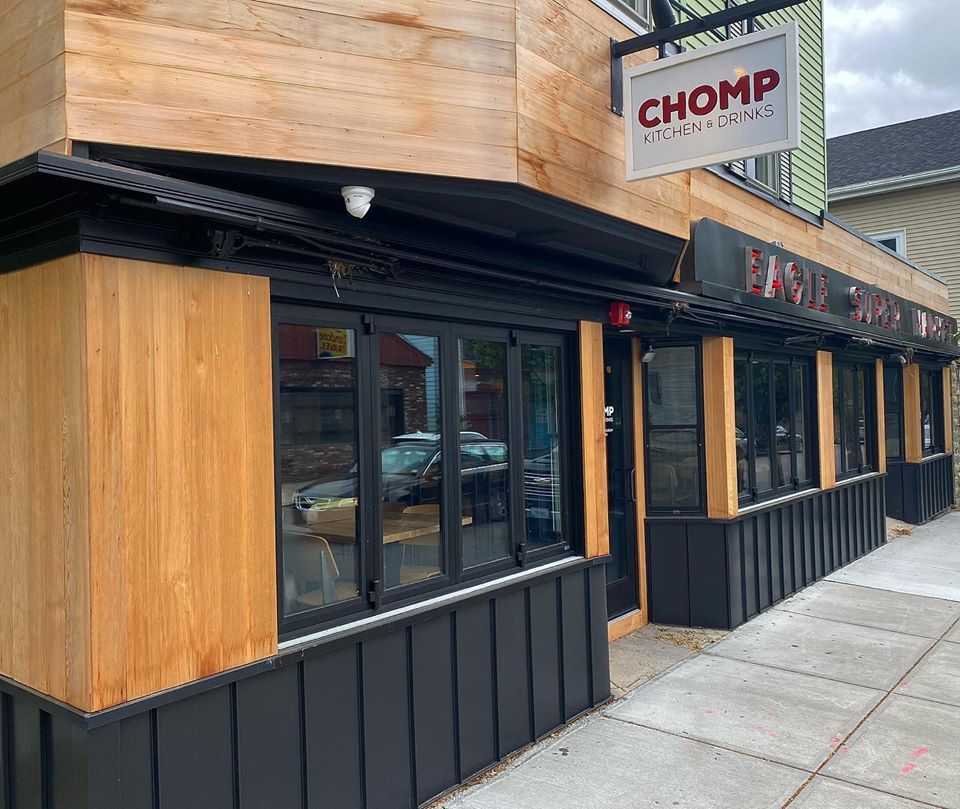 Chomp Kitchen and Drinks in Providence will open for takeout next week.

Editor’s Note: This post was updated from a previous version on June 4, 2020.

After months of being put on hold for its spring opening, Chomp Kitchen and Drinks in Providence’s Fox Point will finally open for takeout on Wednesday, June 10. Advance online ordering goes live tonight for takeout that will available for pickup starting next Wednesday from 4 to 8 p.m. After a week or two of serving just takeout, Chomp owner Sam Glynn plans to open some sidewalk seating followed by reduced capacity in the dining room. Right now the hours will be Wednesday to Saturday from 4 to 8 p.m., and takeout will be sold in pre-orders for timed pickup through Tock, then distributed through the restaurant’s open windows.

Along with the restaurant opening, the Fox Point neighborhood will once again see the Eagle Super Market sign illuminated along Ives Street. The building holds historical significance for the neighborhood and Glynn’s renovation of the property honors that history in the dining room.

“We wanted to come in and be respectful to the neighborhood,” says Chomp owner Sam Glynn. Repairing the neon to preserve the Eagle Super Market sign would have been very expensive, but they were able to hire a company to replace the interior neon tubing with LED lighting, while preserving the galvanized, weathered lettering. “It’s more energy-efficient and the glow isn’t as drastic. People in the neighborhood who used to see it lit up will have it back again,” he says.

The interior of the restaurant has been gutted and remodeled by Cyr Construction out of Barrington. There’s a beautiful concrete-topped cedar bar with elongated, textured white subway tile along the back wall, and cedar booths with concrete floors. “Every wood in here is cedar,” Glynn says with a laugh. “We joke that people are going to store their winter coats in here during summertime.”

Glynn is leasing the space from Jake and Kelly Ann Rojas, owners of Tallulah’s Taqueria. They purchased the building more than a year and a half ago and were looking for the right restaurant tenant to bring even more flavor to Fox Point. “He’s the one that really started this whole neighborhood revitalization with the opening of Tallulah’s Taqueria,” Glynn says, “And now we have Aleppo Sweets and PVDonuts, plus Noodles 102 has always been awesome, and the coffee shop is fantastic.”

The Providence location of Chomp Kitchen and Drinks will host indoor dining before its Warren counterpart because of its larger size. Chomp number two has the same foolproof menu of burgers, sandwiches and beer as Warren as well as takeout craft beer, cocktails, sangria and more. There eventually will be up to sixty seats including a “Snug” area, an Irish and English pub-inspired private booth with a curtain that can seat six to eight guests with its own television. Talk about perfect social distancing for dining out! For phase two of Reopening RI regulations, they can legally seat fewer guests than capacity due to spacing tables and bar seating six feet apart in the small dining room. The restaurant is currently figuring that out.

“We definitely felt a shift in people craving table service again, we just didn’t expect it to come back so fast,” Glynn says.

The kitchen staff for the new Fox Point outpost has been training in Warren to get ready for opening day. Chomp two’s chef, Niki Holden, previously helmed the kitchen at Roberto’s in Bristol. Renowned bartender, Vito Lantz, will lead bar operations while continuing his other bartending gigs around town.

Alongside executive chef Tanner Larkin, Glynn is also running catering operations, which can include seated dinners to casual small receptions with burgers and beer for socially-distant parties and weddings, or even catered office lunches with drop-tray service.

Glynn credits the construction team and his staff for making it possible to open and run the restaurants, especially during a difficult time to open a new one. “It helps having good people and giving them responsibility, because it allows them to grow, and the business to grow,” he says. “It keeps them hungry.”