The Rhode Island women, ages sixteen to twenty, made history when they became the first all-female youth team to complete the 635-mile race. 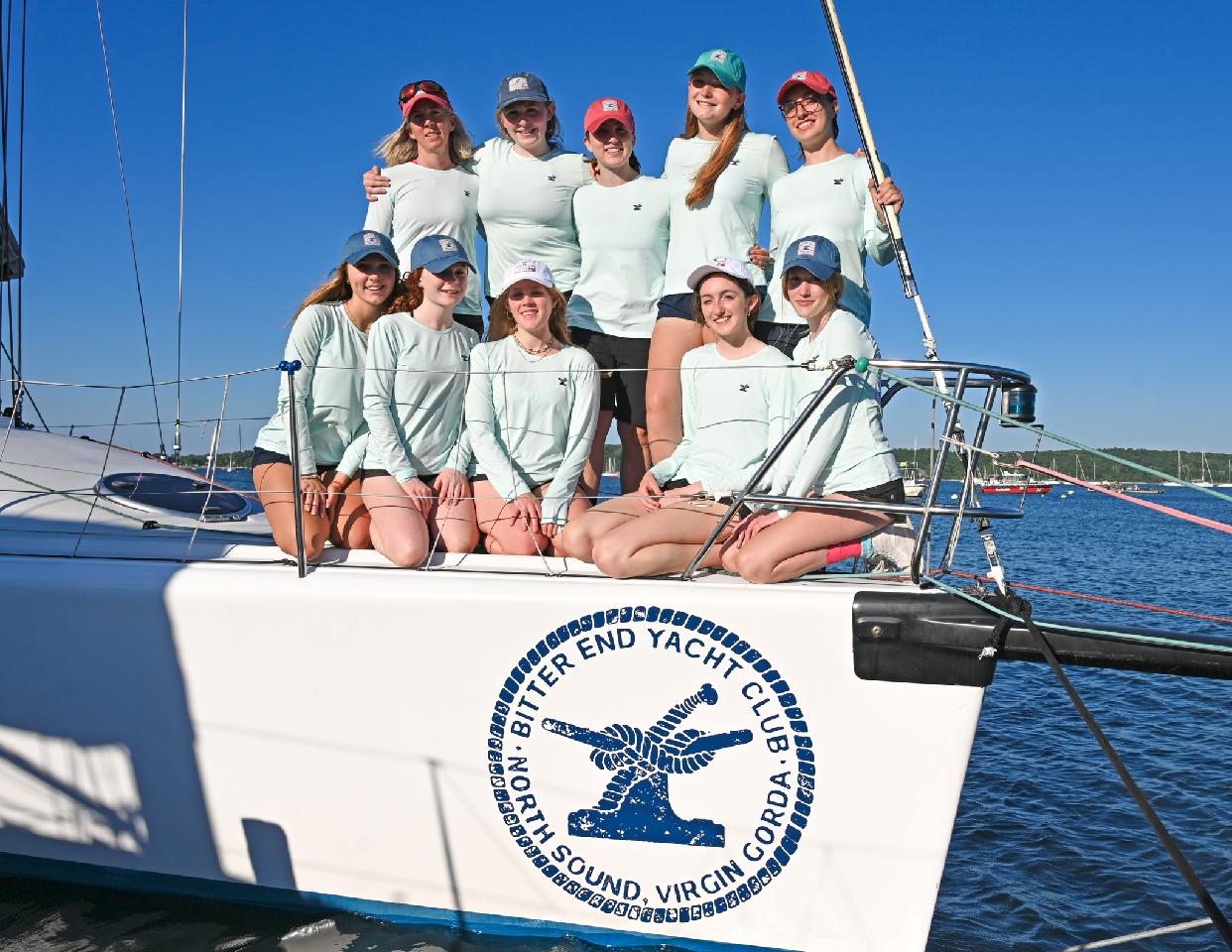 Sailing can be a bit of a boys’ club.

Just ask the ladies of Team Bitter End, who became the first all-female youth team — and one of only a handful of all-female teams in the race’s history — to complete the Newport Bermuda Race when they crossed the finish line at St. David’s Lighthouse on June 20.

The idea started in Bristol, where Wilme and the Lincoln School students met while participating in the Collegiate Offshore Sailing Circuit last summer. As the season drew to a close, the students began looking for more opportunities to continue sailing together.

“Eventually, we were at dinner trying to figure out what was next after what was supposed to be our end-of-season race was canceled. We were just joking about doing Newport to Bermuda. And then somehow we figured it out,” says Fischer, who spoke to Rhode Island Monthly with two other crew members from the cabin of their boat while they prepped for the return journey from Bermuda last Friday, June 24.

The Newport Bermuda Race, which kicked off on Friday, June 17, is the world’s oldest regularly scheduled ocean race. Crews travel 635 miles from Narragansett Bay to the coast of Bermuda, battling rough weather and navigational challenges along the way. It’s one of only two regular races completed mostly out-of-sight of land, presenting an additional obstacle for even the most experienced sailors. This year, that danger became evident on the third day of the race, when a New Jersey man and race veteran died after falling off his boat.

To complete their goal, the Rhode Island students reached out to Oakcliff Sailing, a Long Island-based sailing center that trains youth and adult teams. For several months leading up to the race, the crew traveled to Oakcliff every weekend to learn the sport of offshore sailing. It was there they met Greenhalgh and became acquainted with the Farr 40 sailboat they would use in the race.

“We’ve been able to learn a lot from her experiences on the water,” Wilme says about Greenhalgh, who sailed on the all-female Team SCA in the 2014-2015 Volvo Ocean Race.

Leaving the bay, they faced challenges right from the start. The women had heard rumors of bad weather, and Wilme, who served as navigator for the trip, says their satellite phone was not able to connect to get real-time weather updates. Instead, they relied on their sailing and observation skills to adapt to weather conditions as they occurred. Later, they learned this old-school approach gave them an extra edge over the competition. After speaking with other navigators, Wilme says, she learned several other boats spent precious time routing around potential weather systems spotted on their satellite data.

Along with poor weather, the women had to contend with equipment issues. On day three of the race, a gooseneck pin holding part of their mast in place came loose. The crew worked together to fix the problem and resumed sailing within two hours.

“We handled it really well,” Wilme says. “We had a couple people up there holding it in place. We were super slow and careful about how we fixed it, and we were able to get it back on. Meanwhile, another Oakcliff boat had almost the exact same problem on the start line and they dropped out of the race.”

On the boat, each crew member worked a four-hour shift before rotating for two hours of standby watch and two hours of sleep. In between the grueling schedule and the adrenaline rush of competition were moments of calm when they experienced the beauty of being alone in the middle of the ocean. Comiskey recalls one evening when the on-deck crew spotted shooting stars in the sky above.

“For the first few days, you’re fixated on when you’re going to get there, how long it’s going to take,” she says. “But we were watching shooting stars, and then a few hours earlier there had been a dolphin jumping alongside the boat. I think those hours were my favorite, just realizing how special it is to be out in the middle of the ocean on a forty-foot boat.”

After four days, the crew was glad when the return of phone service signaled they were getting close to Bermuda. As they pulled into the dock, a cheering crowd of parents met them on shore.

“It was one of the best moments,” says Fischer. “You can’t actually see Bermuda until you’re really close just because of how flat it is. But we started getting service to all of our phones and all of our laptops and all the data from the trackers was loading in, and we were realizing that although we thought we were dead last, we did pretty well.”

Team Bitter End — named for their sponsor, the Bitter End Yacht Club — arrived twenty-seventh out of nearly 200 boats to Bermuda. Even more impressive was their official ranking: based on a corrected time, the crew placed eighth out of eighteen teams in their division, which included professional sailors and much older crews.

While the women were proud of their accomplishment, the reactions on the island were mixed. Some, like the other female sailors who’d heard about the all-women crew from Rhode Island, treated them like mini-celebrities, asking for pictures and congratulating them at race events. Others weren’t so impressed.

“The reactions are so varied to seeing us on a boat. We have little girls coming up to us screaming, asking to take a picture of us, telling us how they want to do the race in the future. And then we have old men coming up to us saying ‘Oh, the return crew has arrived.’ But then you have that moment you’re able to say ‘No, I actually did the race, this is an all-female crew.’ Not only did we do it, but we beat the people who are saying that,” Fischer says.

In another instance, Wilme and Comiskey attended a post-race navigator’s forum, where they counted fewer than ten women in the room. An hour into the meeting, after a woman spoke up for the first time, several men walked out.

“We see some of the boys we know who were on boats who didn’t do as well as us get offered rides on different boats. I think we’ve been offered more kisses from guys than rides on cooler boats,” Wilme says.

The sailing community might still seem stuck in the 1950s at times, but Team Bitter End says they’re hoping to move it forward with their example. Since arriving in Bermuda, they’ve heard several women express interest in getting more of their friends into sailing, even if it’s just with family members or crewing on another person’s boat.

For a team that just spent four days on the open water, what’s a few glass ceilings?

“We know that bad things are going to happen, and we know that we’ve prepared for them,” Comiskey says. “When they do happen, it’s scary and it’s stressful, and I think we can kick into the survival mode we need to get things done and make sure everyone’s safe and happy. But we know it will end.”

Five Ocean Activities to Try this Summer in Rhode Island