Five Ocean Activities to Try this Summer in Rhode Island

The expansive ocean blues allow for exploring, be it above water on a board or under the sea. 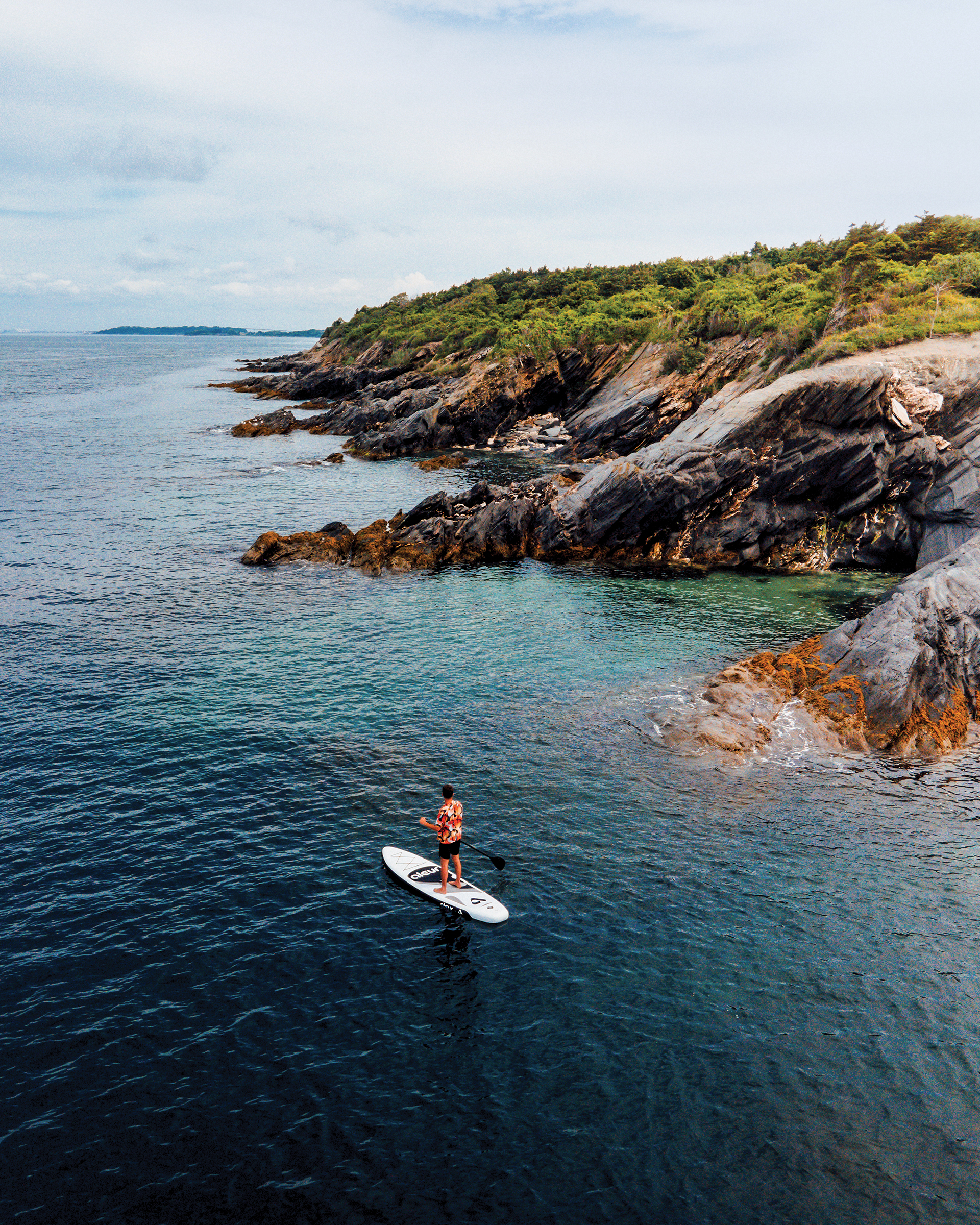 Ready for a cardio, ab and leg workout all in one? This one’s for you. SUP is like an outdoor gym session and requires a
fair amount of balance as you go from a kneeling paddling position to an upright stance. Don’t worry if you fall, though — it’s bound to happen at some point. Just recenter yourself and get up again.

Take a look below the surface and see what’s in store for your underwater adventure. You never know what you’ll come across: fish, coral or maybe even someone’s missing GoPro. Hit up places like King’s Beach fishing area in Newport, Fort Wetherill in Jamestown or Block Island.

The sport is making a comeback! A skimboard is more portable than a surfboard, making it easy to catch a wave or glide across a low-tide area. The best places to practice before graduating to the waves include Misquamicut State Beach in Westerly, the north end of Narragansett Town Beach and Charlestown Town Beach. Always check your local beach rules about skimboarding: some areas have designated spots for surfing and water sports away from large crowds, while others may not allow it.

A writer discovers her flair for hanging ten at a female surf camp. By Aiden FitzGerald 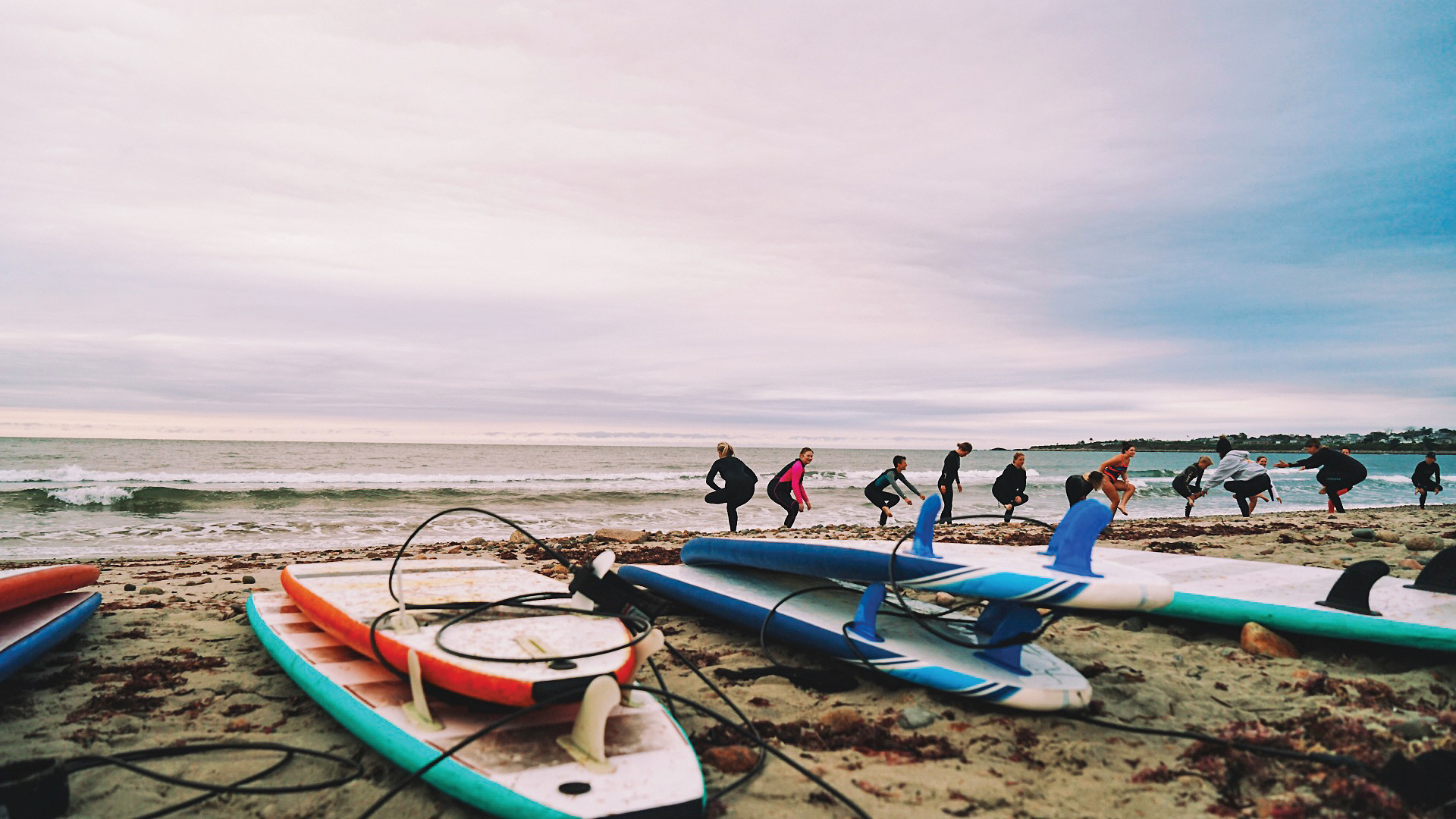 On a misty summer morning, while my children and husband sleep, I sneak out of the house at dawn. Eager to do something for myself and to embrace the challenge of learning something new — how to surf, at Little Compton Women’s Surf Camp — I meet two of my girlfriends and nine other women at Little Compton’s South Shore Beach.

Feeling revitalized is something I expect: an ocean swim always uplifts me. But the meditative therapy I feel from riding even the tiniest wave — and falling plenty, too — is a surprise. Turns out that the tenets of surfing — overcoming mental blocks, being present, looking up and forward — are a metaphor for life.

“In life, we tend to want to control things, and in surfing, too,” instructor Ana Barend tells our class, seated in a circle in the sand. “Let go and have an amount of abandonment. Let it go!” Barend sings the tune from the Frozen song and we all laugh. “It takes a lot of courage to trust yourself and trust the process.”

Barend, a psychotherapist and two-time Brazilian national surfing champion, started Little Compton Surf Camp with her husband, Chuck, and the Kinnane sisters, Maureen and Janie. This year marks the camp’s thirteenth season. Their eight sessions of weeklong children’s camps sell out within twenty-four hours of being posted.

On the sand at South Shore Beach, we stretch, practice our pop-ups and establish a board stance. All twelve of us campers are first-timers, spanning decades from our thirties to sixties, including a mother-daughter duo.

“As adults we tend to overanalyze and think too much,” says Maureen Kinnane, pointing out that children tend to just go for it. “We get in our own way.”

Maureen and Janie grew up surfing with their father and eight brothers, but credit their mother with encouraging them to dive into the sport in order to spend time with their dad.

“We learned by following along,” says Janie.

In the water, frustrated by a couple of missed waves, I listen to Barend encourage me to tap into the power of visualization.

“Close your eyes,” she says. “Imagine yourself popping up and riding the wave. Everything you think — everything! — creates a pathway in your brain and changes its matter.”

Bobbing, waiting for the right wave, I envision myself riding into shore. I feel the push of the wave, paddle with my arms and hear Barend exclaim, “Pop up!” Suddenly, it works! I rise up, steady, legs bent, arms stretched wide, moving on top of water. I am letting go and ready for anything. 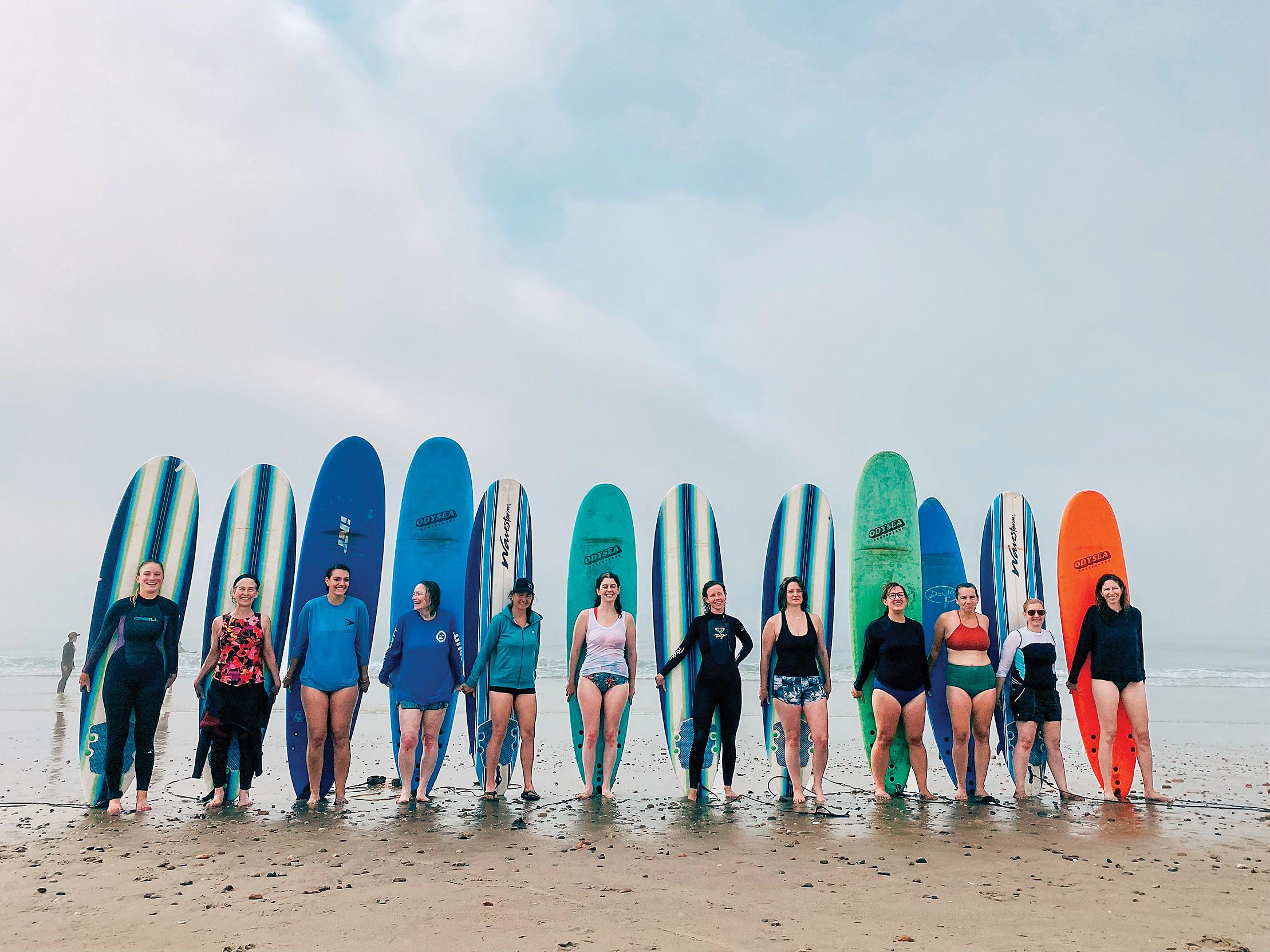 Before hitting the water, take a lesson or two from the pros to make sure you won’t wipe out. Most surf schools travel to local beaches for your convenience.

Reconnect with your food at Spearfishing Rhode Island. By Lauren Clem. 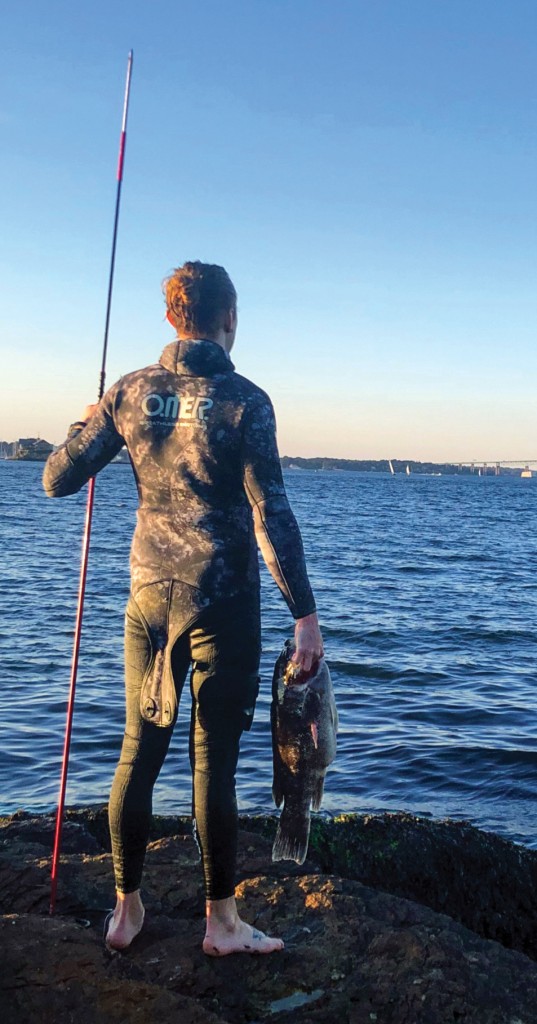 Max Augliere was nineteen the first time he saw someone spearfishing. The Virginia native was working the rental desk at a beachfront hotel while attending college in Florida, and he knew he’d found something intriguing.

Now thirty-one and the owner of Spearfishing Rhode Island, Augliere shares his knowledge of the ancient fishing technique with others by offering guided experiences off the coasts of Newport and Jamestown. Rhode Island waters, he says, are rich with spearfishing catch, especially the native tautog, a sweet-tasting bottom-feeder that can be difficult to hook on a line. His clients range from businessmen trying to challenge themselves outside their usual spheres to a vegan looking to reconnect with her food. He’s even fished with Canadian Prime Minister Justin Trudeau.

“It’s a very visceral and close experience,” he says. “I want people to feel a deep connection to the ocean, and I think they can get that if they spearfish and they go through that process.”

A typical day starts out at the dive location, where Augliere runs customers through breathing exercises and goes over the gear. Spearfishing is typically done as a free dive, which means divers must hold their breath while catching a fish (his own record is four minutes and forty seconds). After that, it’s into the water, where clients use one of several types of spears to catch a fish. The day ends with the recitation of the ho’oponopono prayer, a traditional Hawaiian prayer asking forgiveness, and the chance to fillet the day’s catch by the water.