The Pawtucket skatepark’s art show on April 23 kicked off the location’s refurbished identity as both a skatepark and a local events venue. 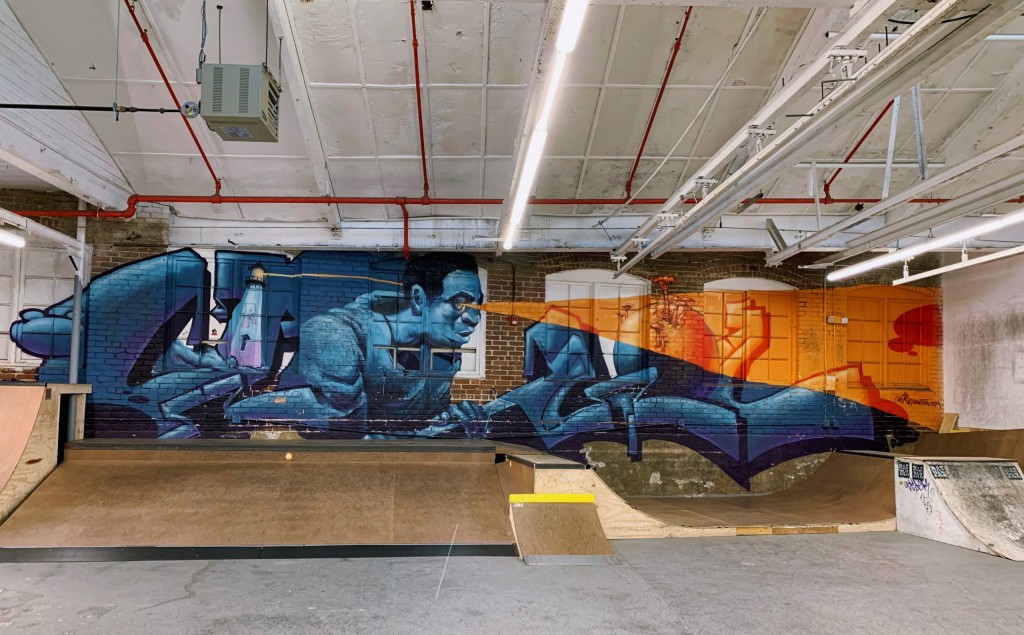 A mural by @refractualism adorns the main wall at Lighthouse Skatepark. Photography by Edelinda Baptista.

An important detail about skating is when you fall down while attempting an ollie or a backside 180 kickflip, you get back up on the board and try again. That’s exactly what Brandon Davis, owner of Lighthouse Skatepark, did when trying to get in contact with the skatepark’s previous owner.

In the midst of 2020, clips of people skating inside the large building appeared on Davis’s Instagram timeline, an empty room with prefabricated ramps the owner had bought. Immediately he imagined the potential this 4,500-square-foot building had as a skatepark and possibly more.

After finding the building’s address, his first attempt to talk to the owner in person was in vain – the park was locked and dark. Second time around, six months later, two people who had rented out the park gave him some more information about how they set up their private skate session, but still no sight of the owner. Third time, Davis went next door to Special Moments Photography eager for more info, leading him to call one more time. Fourth time’s the charm.

He finally spoke to and scheduled a meeting with previous skatepark owner Ben Lane, who was more than willing to hear his ideas for the park. Davis donated his personal ramp to the park, soon forming a business relationship between the two.

Lane, who has a wife, children and a career as a teacher, decided that selling the park to Davis would be the right call, especially since he would be selling it to someone who’s a part of the skateboard community with plenty of ideas on how to attract more determined skaters and rollerbladers.

Davis has been skating for more than twenty years and has never owned a brick-and-mortar business before. The Mansfield native is a musician by trade – he and his business partner, Isaac Vigil, would go on tours with their music group called Lions Lions, and perform to audiences across the globe. This new journey has led him to learn more about the world of business and how to maintain one.

“It’s a pleasure to be able to provide a place where people of all walks of life are welcomed and accepted. A large number of my customers are BIPOC, members of the LGBTQ community and women. People often express to me how they enjoy the all-inclusive environment and that brings me so much joy.” 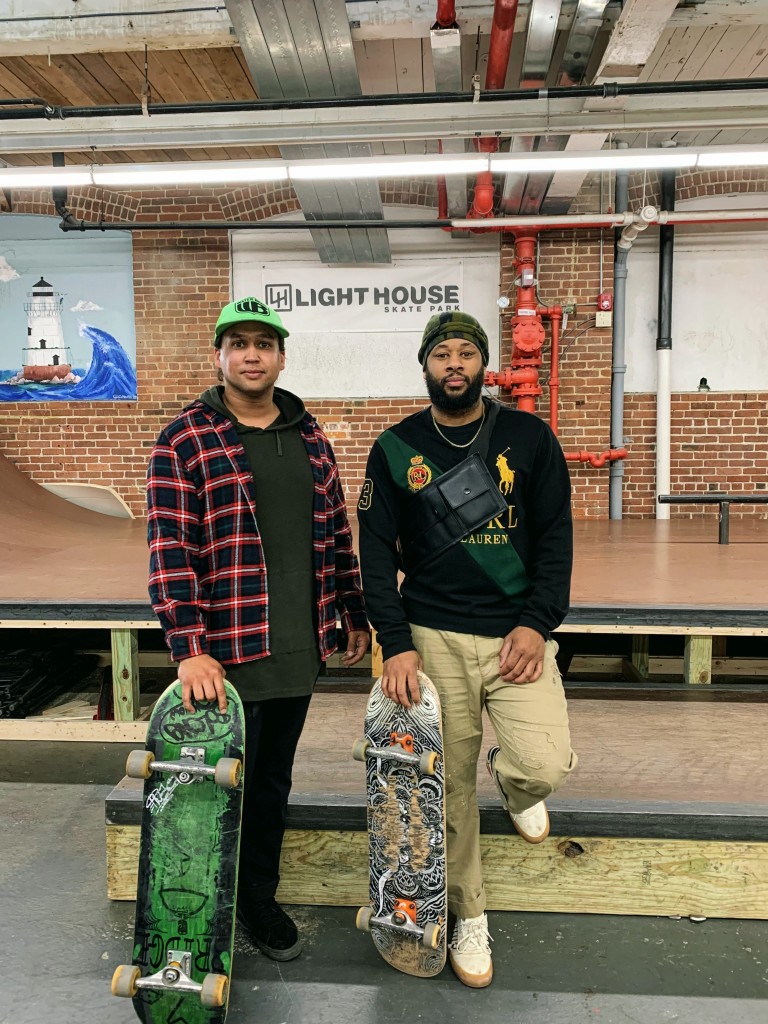 Besides working together at Lighthouse Skatepark, Brandon Davis (right) and business partner Isaac Vigil are also in a band together called Lions Lions.

The walls are decked out by murals by Kendra Houston and Refractualism, adding to the building’s scratched-up ramps and pipes.

Lighthouse Skatepark’s first event kicked off with an art show on April 23 and featured artists from near and far to showcase and sell their work including photography, printmaking, clothing, abstract art and graffiti. Not only did the art show help support up-and-coming creatives; it also demonstrates how the skatepark can be transformed into a different venue when needed.

“One of the main reasons for wanting to be in this space, aside from skateboarding, is to host events in here; have live music, pop-up shows, open mics, art shows,” says Davis. “Sometimes it takes somebody to do something for people to follow suit. I want people to know that they can contact the park and have an art show here,” says Davis. This particular art show isn’t charging the artists either; the crew only asks that they bring their own table.

“Typically in a gallery-type scenario, you have these fees that are limiting to the artist, then hope that whatever goods you’re selling will accumulate to that money so you either break even or make profit – I didn’t want to do that,” he says. “This is an opportunity for people to come on a first-come-first-served basis, set up wherever you want, and do your best to sell your stuff.”

The event is donation based, so the entry fee is pay-what-you-can.

“We’re trying to have a place that’s safe for all ages, genders, religions – everyone is welcome here,” says Davis. “We need more places like this and we need this place to be here, but I can only do that with the support of the community.”

Skateboard or roller skate at Lighthouse Skatepark from Thursday, Friday and Sunday 3–9p.m. and Saturday 9 a.m.–9 p.m.; Tuesday and Wednesday are reservation only. The park also offers skateboarding lessons to all ages and skill levels, as well as monthly memberships. Host an event at the space via the website or contact Davis for more info. 881 Main St., Pawtucket, 401-543-6727, lhsktprk.com, instagram.com