A Revolutionary Rebirth for the General Stanton Inn

The inn’s new owners are embracing the building's 300-year-old history while crafting a fresh vision for the future.

For nearly 300 years, the General Stanton Inn has welcomed presidents and scoundrels, Revolutionaries and rumrunners within its storied walls, playing host to the whispered plans of spies, illicit games of roulette and serving as a stop on the Underground Railroad.

Now new owners David and Jackie Moore are hoping to continue the Charlestown landmark’s legacy by turning it into a seven-acre wedding and special events venue complete with a tavern, fine dining area and luxurious guest rooms.

The tavern reopened in August after a ten-year hiatus, with a soft rollout for friends and family Aug. 10 and a grand opening Aug. 17.

“The feedback has been phenomenal,” says David, a self-proclaimed history buff who purchased the inn in February. “People love the food. That’s really important as we’re trying to build our reputation. We’re trying to deliver exceptional food and exceptional service. We want it to become the place to eat between Westerly and Narragansett.”

Chef Tom Hagist, formerly of the White Horse Tavern, is at the helm, crafting a lineup of traditional New England fare with a twist. Think johnnycakes with slow-roasted beef, supper chowder with local white fish and clams and seared scallops with chourico, corn and white beans. In addition to dinner, the tavern recently started serving Sunday brunch from 11 a.m. to 2 p.m.

In June, they launched a new iteration of the inn’s flea market, said to be the oldest continually operating market of its kind in the state. Curated by the folks behind the Field of Artisans markets, the General’s Market brings together art, artisans, vintage goods, antique peddlers and curious buyers on Sundays through Oct. 9.

“In its heyday, it had 100 vendors on the property,” says David, who remembers visiting the market as a boy, spending his allowance on things like baseball cards and pocketknives. “I thought it was important to continue the tradition, so to speak.” 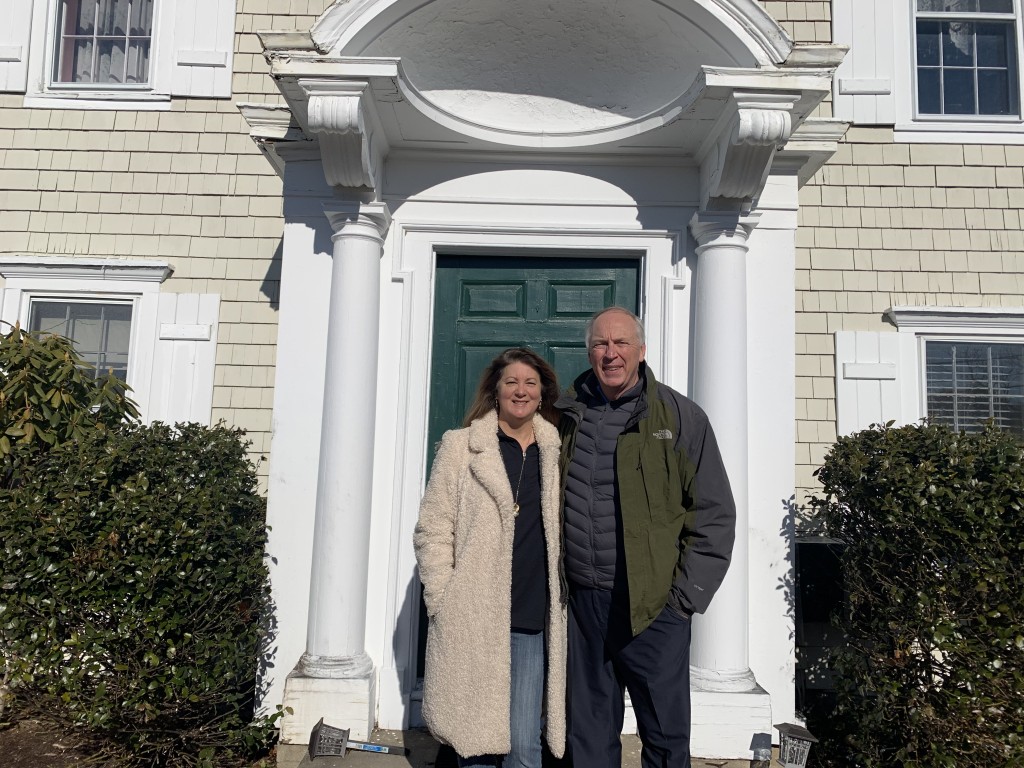 Jackie and David Moore are the new owners of the General Stanton Inn. Photo courtesy of David Moore.

Carrying on tradition is important to David, a Narragansett native and self-described history nerd. After all, his family is only the seventh to own the inn. And it is a true family affair — you can often spot Jackie helping out in the dining room, and daughter Sarah is the inn’s events manager.

The family splits their time between Simsbury, Connecticut, and South Kingstown, although they haven’t spent much time in the Nutmeg State during the last five months, David says with a laugh. Rehabbing the inn has made for long, yet rewarding, days.

David’s dream of owning his own restaurant first bloomed at the University of Rhode Island, when he worked shifts at the Coast Guard House in between classes. When he saw the inn was for sale, he was sold — he just loved the site’s history and the potential it held.

Since February, they’ve been rehabbing the inn bit by bit, starting with the kitchen and tavern spaces, which have gone from a dark and dated maelstrom of pine to a crisp, bright and elegant space, with white walls, plenty of natural light, banquette seating and a gleaming mahogany bar.

On the exterior, they replaced the cedar shingle siding with cedar clapboard, painting it a warm amber hue — Sherwin-Williams’ Colonial Yellow — with input from their Facebook and Instagram followers. During restoration, they stripped the siding down to the original wood, which dates to 1740.

In the attic, they found another surprise: Old ship masts were used for many of the beams in the attic. They’re still there, providing strength and stability as they’ve done for hundreds of years.

David has used local contractors for most of the work, which included bringing the electrical work up to code, gutting rooms, refinishing floors, painting, installing new plumbing fixtures and equipping the dining areas and guest rooms with air conditioning.

He hopes to have the fine dining area open sometime this month. He and Jackie have been busy cleaning and dusting the room’s art deco lighting fixtures at home and bringing them back for installation. The room was first built in the 1920s as an overflow space and speakeasy for Prohibition-Era revelers (the inn was home to many rumrunners during that time, as well as visitors like Al Capone and actress Tallulah Bankhead, who was said to party into the wee hours of the night, cocktail firmly in hand).

The room will feature an upscale menu, fine wine and soft jazz from the likes of Ella Fitzgerald and Louis Armstrong to complete the Roaring Twenties vibe. David hopes to complement it with an outdoor deck next year.

Crews are still working on the fourteen guest rooms, installing spa-quality bathrooms, Wi-Fi, air conditioning and fine linens. In addition to the main inn rooms, there are “Beach” rooms in the back of the property with saltwater-taffy-colored doors done in adorable pastels like pale mint, pink, yellow and baby blue.

The inn should open in the late fall. 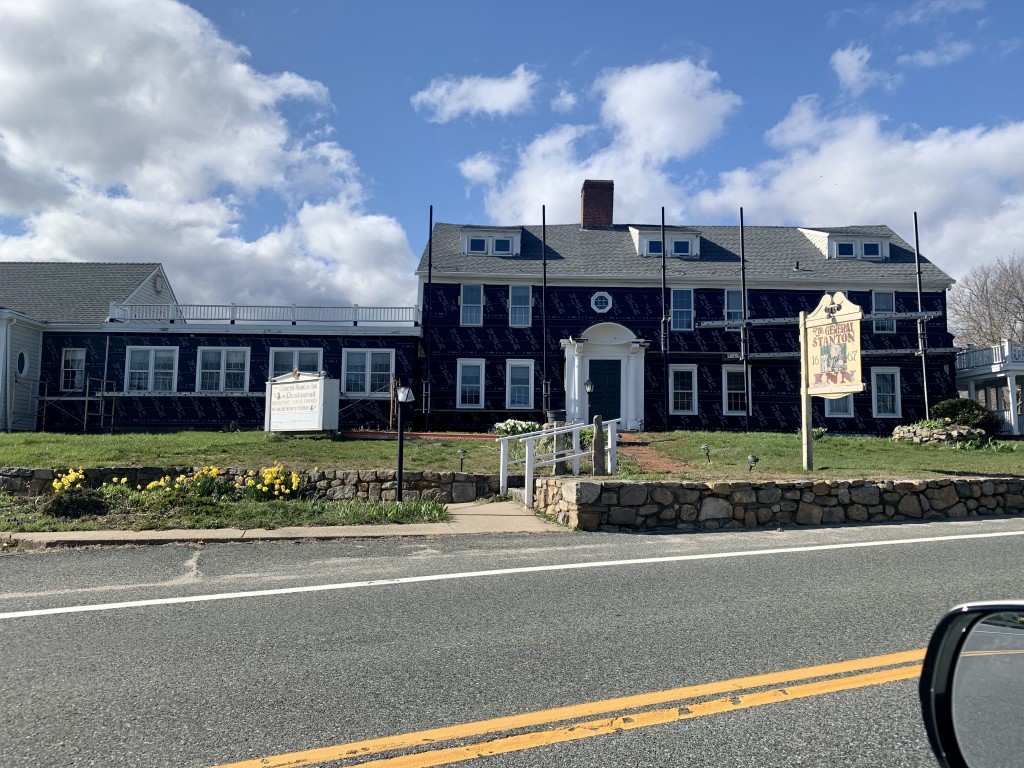 The inn shown with the original wood siding that dates to 1740. Photo courtesy of David Moore.

The inn, and the area surrounding it, has a rich history that dates back to the 1650s. The Niantics, a tribe in Narragansett Nation, gave Thomas Stanton the property as a reward for rescuing a Native American princess who had been stolen by the Manese tribe. Stanton, it’s said, rowed the twelve miles out to Block Island, where the princess was being held, and negotiated her release.

In 1740, his grandson — Joseph Stanton II — built an inn next to an existing building on the land, a circa-1667 room that he turned into a school for Native American children. Joseph Stanton III, a member of the Sons of Liberty, used the tavern as a covert meeting spot for General George Washington’s spies, helping to hatch plans for the American Revolution.

It served as a spot on the Underground Railroad in the 1840s, when Joseph Stanton V and noted abolitionist Moses Brown helped enslaved people travel north to safety. Beginning in the 1840s, the inn became known for its illegal gambling. One of the second-floor rooms had a roulette table that could be raised up and hidden in the ceiling in case officers made a visit.

Rumor has it that the inn was the first building in Charlestown to get a phone, so the owners could be warned if police were on their way.

The stretch of lawlessness continued into the 1920s, when the inn turned into a speakeasy and housed several rumrunners within its walls.

In another nod to history, David wants to turn the oldest part of the inn — the building that dates to 1667 — into a tasting room for fine rum. Newport was the rum capital of the world in the 1700s, he says: More than sixty of the country’s 120 rum distilleries were located in the City by the Sea.

It’s the one room he wants left untouched. It will be named the Narragansett Room, after the local Narragansett Indian Tribe.

He’s hoping all the hard work and rehabbing leads to a long partnership with the community, including the people who call Charlestown home year-round, those who embrace its tranquil, seaside beauty during the warm-weather months, and those who travel the Old Post Road looking for a warm meal and a place to rest their weary bones, as countless travelers have done for the past three hundred years.

“We’re so happy with how the community has embraced us,” Moore says. “The local community is so important to us, and we hope to be part of it for a very long time.”