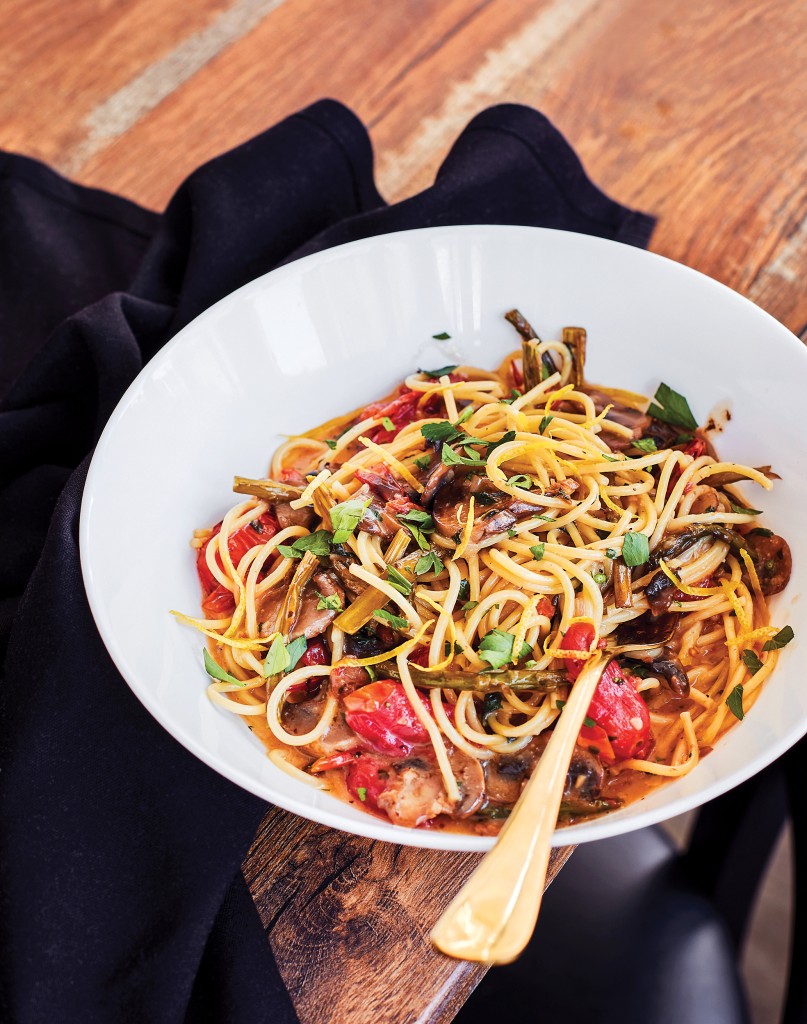 PiANTA’s small footprint — tucked into a corner high up on Federal Hill between a revolving array of veal cutlets and Sunday gravy with bits of pork — might be misleading. Once a takeout-only kitchen on Bath Street, owner and chef Michelle Politano went full service earlier this year on a corner lot filled with light and a clean aesthetic. Walls are black with an art-deco backdrop and a cascade of faux plants adorn the dining room with seating for around forty-five. The staff is also clad in black branded T-shirts and tan aprons, though self-expression is de rigueur: Leia buns, an updated mullet, full-body ink and a panoply of piercings are the first signs in this subtle space that creativity has been let out of its cage.

Politano does not go softly into this great night of plant-based foods. There are certainly salads to be found, but the menu comes out swinging against the Italian deli, your favorite seafood or seasonal craft restaurant, and nearly every fast-food drive-thru. In other words: PiANTA is out to capture American eaters by indulging in their established diet. 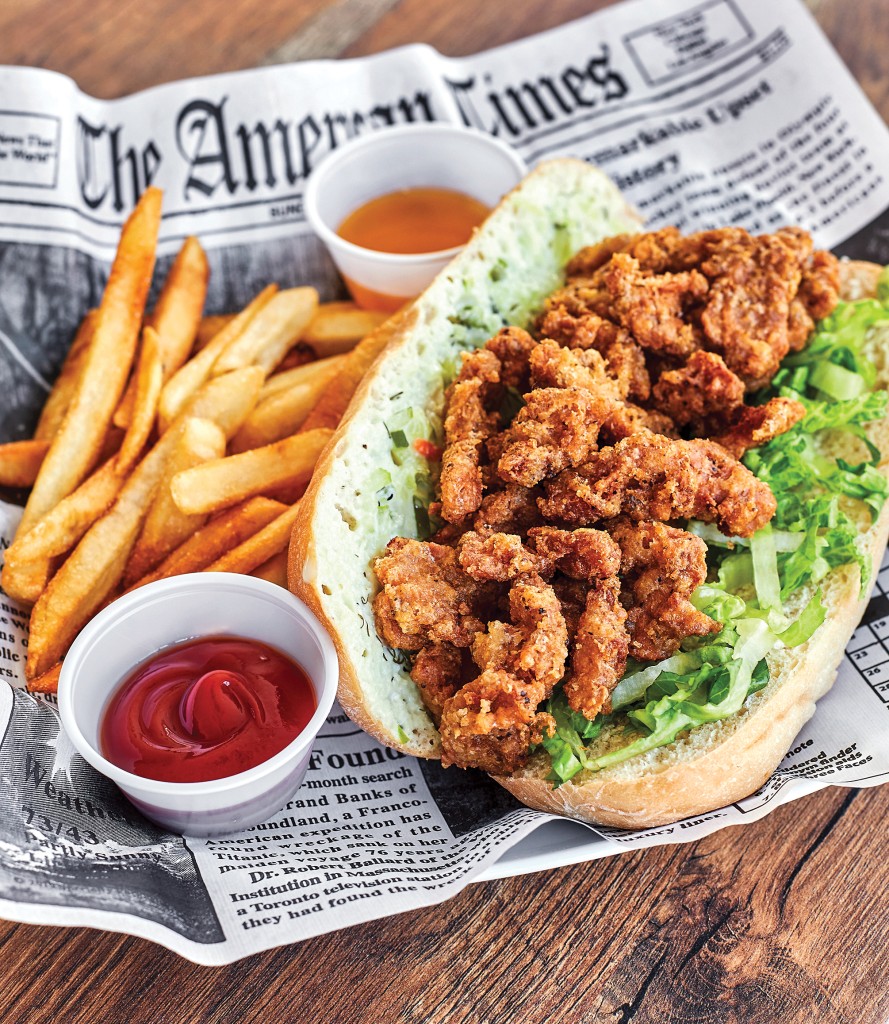 Walk through the door and you’re met with the smell of something frying. Dumplings? French fries? Nope — it’s egg rolls (a “steak and cheese” rendition with chipotle aioli) and nearly every table orders them. Almost as popular are “chicken” tenders coated in housemade Carolina barbecue sauce and served with non-dairy ranch. They’re made from soy and pea protein but saying so seems almost like a secret because Politano spends every meal seriously messing with your mind. Even the “chicken” piccata captures the traditional Italian flavors of Federal Hill. Where Plant City envisions an agricultural utopia, PiANTA meets people where they are — in a Willy Wonka world where Italian grinders come piled high with fried cutlets and banana peppers, and where antipasto is still five layers deep with deli meat (that happens to come from a plant). 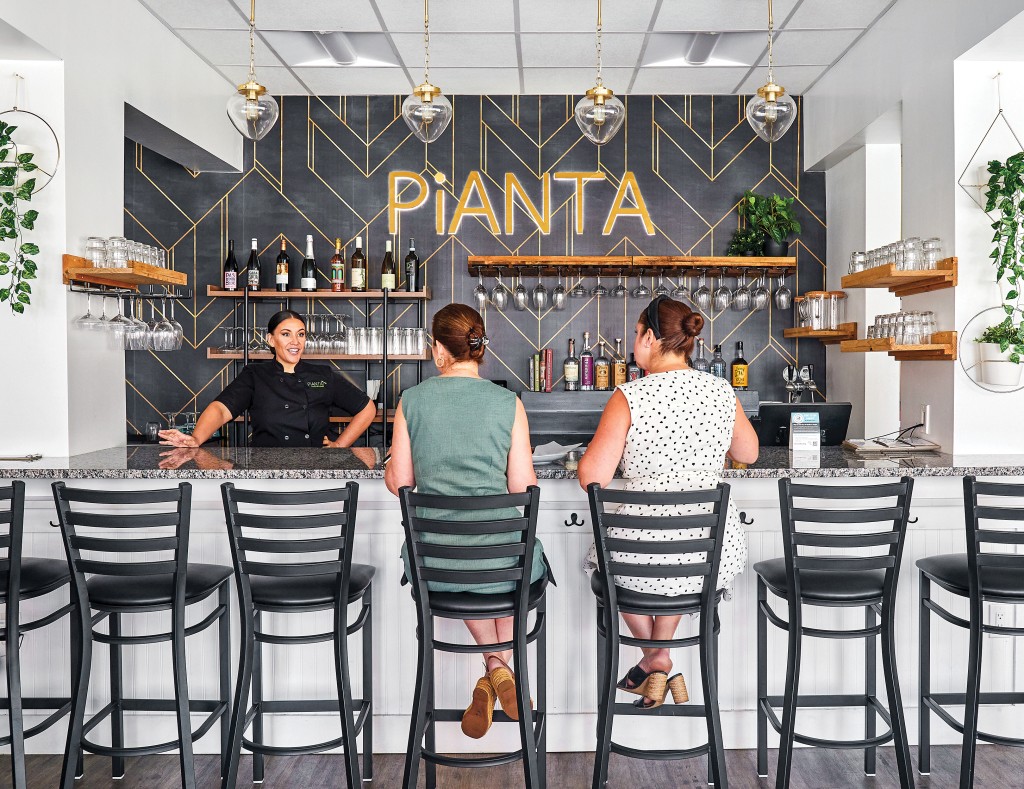 The bar at PiANTA. Photography by Angel Tucker

There are less audacious dishes — eggplant Parmesan and gnocchi with creamy pesto — but this is a kitchen intent on proving that you will give up nothing to go plant-based. Enthralled by the fried chicken wars of the last several years? Politano offers a platter of her version paired with mashed potatoes and gravy, a cheddar biscuit and corn salad. Want to see just how close vegan cheese can get to the original? There’s a small cauldron of spinach-artichoke dip willing to do its magic on you. No one is saving on calorie count at PiANTA, but it also charts a path that’s capable of luring even those determined to stay the course. Even dessert — which tends to fall apart at nearly every vegan outpost other than the now-defunct Grange — is a wanton celebration of excess, perfected by pastry chef Danielle Rotella. The gluten-free blood orange and dark chocolate tartlet is appealing as any wheat-based version, but it’s the carrot cake that best manifests the bravado of this small restaurant. Served in cubes over swirls of frosting, it’s topped with candied nuts and ribbons of sugared carrot strips — a circus of sugar that not only proves animal products are unnecessary but suggests they’re irrelevant as well.

The requisite kumbaya spirit permeates this simple space, but PiANTA has a feisty soul. Its menu is a dare to omnivores, a well-founded bet that the kitchen can make a plant eater out of the most hardened fast-food junkies — not to mention placating those who are already converts. 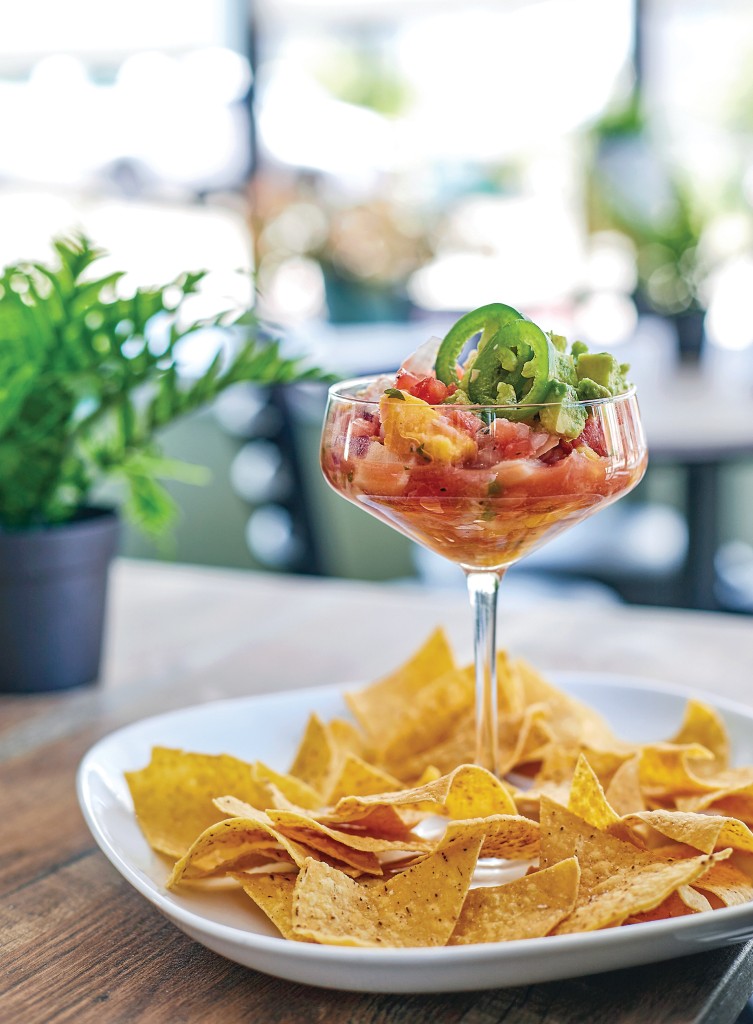