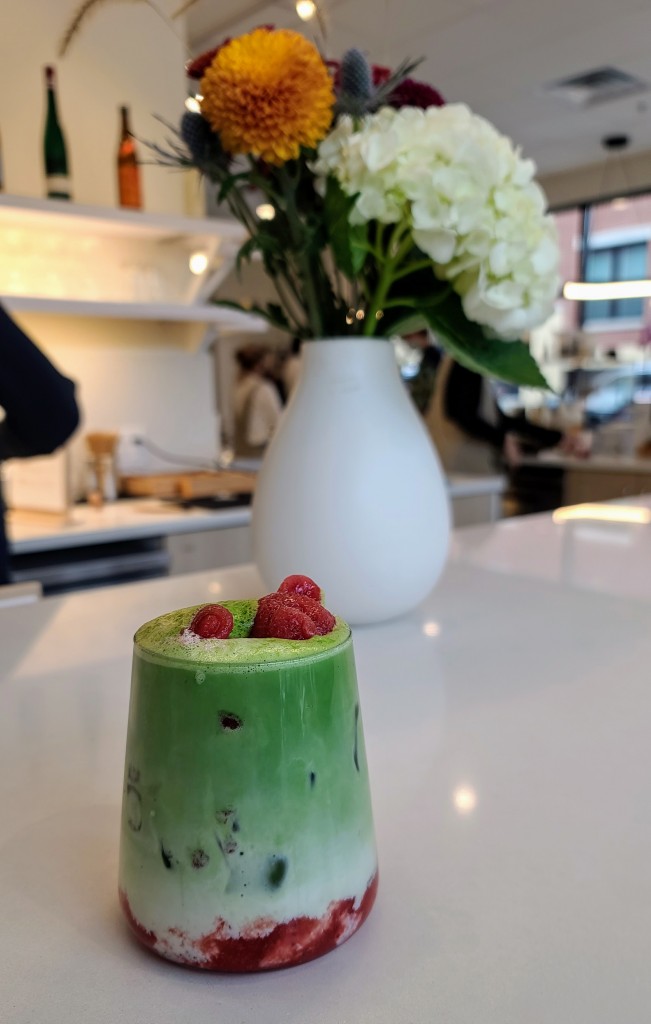 A strawberry matcha drink at Ceremony in Providence. Photo by Jamie Coelho.

Editor’s Note: Celebrate Lunar New Year the whole month of February with a traditional tea ceremony accompanied by award-winning loose leaf teas. Reservations can be made by emailing, events@ceremonypvd.com. This article was updated from an original version published on Nov. 3, 2021.

One of the best remedies for feeling physically or emotionally drained can be found in the bottom of a teacup. And after all we have been through, we could all use a hot cup of tea. Or a real drink, for that matter. Let us tell you where to get the best cup of tea, as well as the best sake and tea-infused cocktails (or non-alcoholic drinks, if you prefer).

Ceremony is a modern tea house, cafe and market and Providence’s first zero-proof bar, located on Brook Street, right near Thayer Street. It recently moved to this new, nearby location in the fall from its previous spot in the former Tealuxe space, which closed in 2019 after ten years in business. Owner Michelle Cheng originally opened Ceremony in late 2019, just before the pandemic hit. Not only did she survive twenty months of uncertainty during COVID-19, but she also had a baby and moved and expanded her business to this larger location. The cafe boasts more room (and a liquor license) for guests to gather and celebrate the experience and tasting notes of artisan tea like one would with fine wines or whisky.

Ceremony also serves natural wine, sake and tea-infused cocktails, local beer, popular matcha drinks, boba and chai lattes, espresso-based drinks like the brown sugar latte and mojito coffee, and so much more, plus you can add on trendy teddy bears (in flavors of espresso, matcha and strawberry) that sit inside her tea drinks; simply let them dissolve into the liquid as you sip to increase their potency. She also plans to stock her teas, teaware and other rare Asian products for the market side of the business. 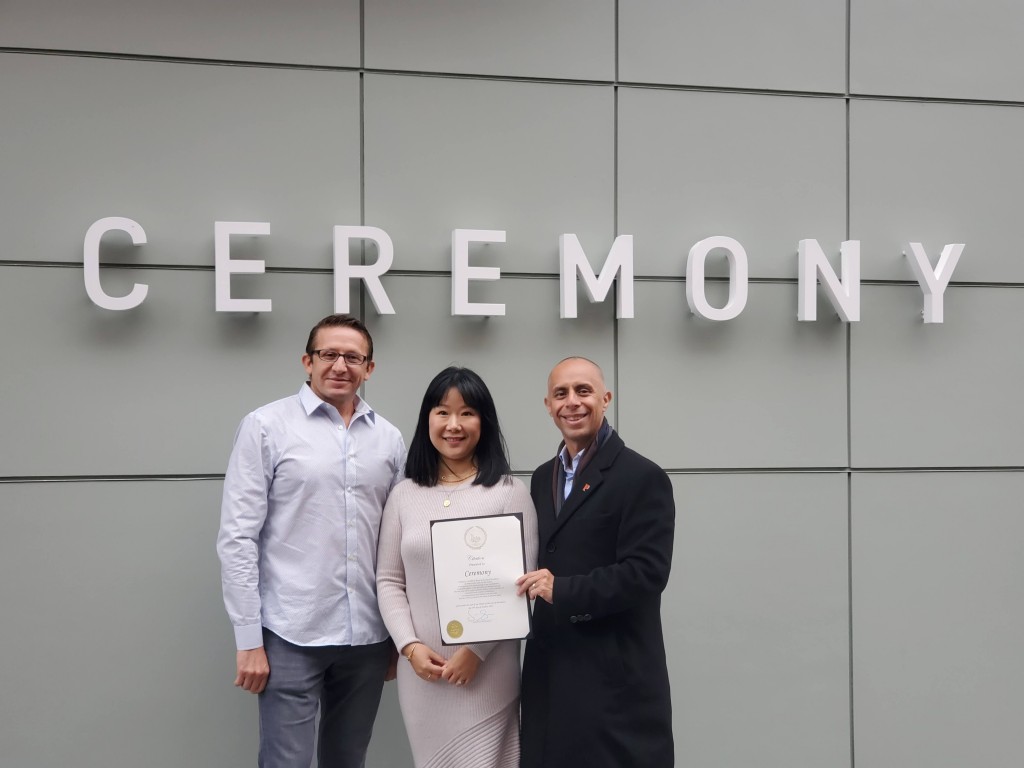 The original café opened in November 2019 after Cheng – who was born in China and came to live in the United States when she was thirteen – established her direct trade, ethically sourced loose leaf tea importing business, Leafy Green Tea. Cheng initially launched Leafy Green in 2017 through Hope and Main in Warren. When she first started the business, she intended to open a brick and mortar space so her clients would have a place to pick up tea orders and do tastings. She chose the former Tealuxe space, but decided to move on from the storefront to expand and allow more space for guests. She is also collaborating more with other local businesses, including the Black Leaf Tea and Culture Shop, KNEAD doughnuts and Sun and Moon Korean restaurant by stocking their products and serving various pastries and snacks like pork buns, congee and sesame noodles. There’s also a private room for intimate tea ceremonies (more on that later).

Cheng got the idea to start a loose leaf tea importing business in Rhode Island after she realized she and her family could not find good quality teas in the United States. “The only tea we could find was what you can get at Stop and Shop and everything came in a tea bag,” she says. “It only tastes good if you put a ton of sugar and cream in it.”

They began drinking coffee instead, but missed the teas of their native homeland. Once Cheng started a job in textile importing in New York City, and began traveling back and forth to China, she started bringing home loose leaf teas from China for her family’s personal consumption.

“Every time I would go back to China, at my mom’s request, I would have to bring an empty suitcase, and that suitcase was dedicated to tea,” Cheng says. “Then I learned it was illegal to import that much tea without claiming for it.”

She eventually moved back to Rhode Island from New York City, and began looking into how to import tea as a business venture. After completing Hope and Main’s incubator program, she found a mentor in the owner of New Harvest Coffee Roasters out of Pawtucket, who allowed her to temporarily use their space for production of popular nitro tea, which she still sells at her shop.

Her goal is to fill a tea void in Rhode Island. “I realized there was a missing link here,” she says. “People were becoming more aware of direct sourcing for coffee and chocolate, and tracing back to where their meat is coming from, but no one was paying attention to tea. What boggled my mind is that tea is the most popular drink in the world other than water.” 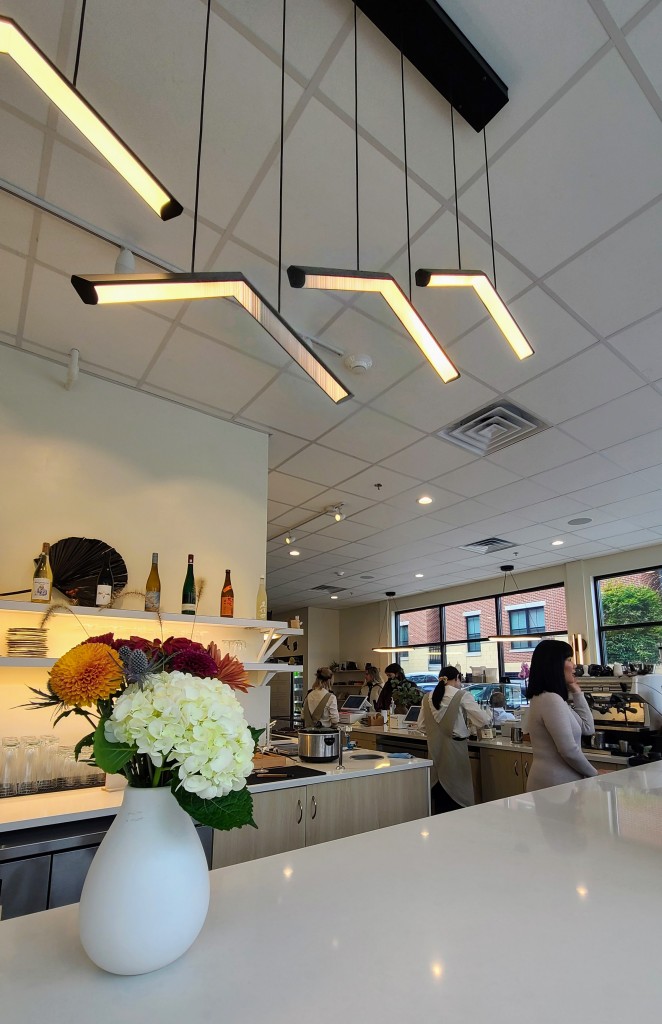 The beautiful decor at Ceremony.

Cheng moved from Thayer Street to her current location on Brook Street, and she modeled the decor to reflect her style and current trends. The interior is contemporary with a clean, white aesthetic. “Everything is minimalist, and then the pops of color come from our tea and drinks,” she says. The green from the matcha stands on the bar out as well as the delicate rose pinks from cocktails and vibrant purple from ube lattes. She carried over the interesting lighting fixture from Thayer Street, and even the bathroom has great lighting for those contagious bathroom mirror selfies.

Ceremony is a great spot to grab a cup of tea to go, or to stay and socialize or study and work over tea. For a bite to eat, Chinese pastries are available, including pineapple cake and occasional taiyaki (a Japanese street food shaped like a fish that’s made with crispy fried batter and filled with sweet adzuki bean paste). She’s been working with Sun and Moon Korean restaurant to supply some snacks and dishes, but recently, the restaurant suffered a damaged storefront when someone drove into the building. They’ll work together again once they are back open and running. Guests can also sit at the bar (or book the private room) and learn all about the ancient drink during a tea ceremony. Tea apprentices will take you through the various steeps of loose leaf tea, so you can experience the ritual and taste the flavors that develop at various intervals. It’s also a bonding experience.

A tea ceremony is an intimate connection in itself; tasting, experiencing and learning in the same environment brings people together. Adds Cheng, “There’s a saying in China that you could be perfect strangers and sit together and by the end of a tea ceremony, everyone is best friends.”

I did a tea ceremony with the Taiwanese rose oolong, and I made some new friends along the thirty-minute journey.

First, guests should rethink American and British customs when it comes to drinking tea. The teas at Ceremony should not be mixed with milk and sugar; they should be appreciated for their natural flavors. “The rose oolong is from Taiwan, and it’s hand-picked and hand-produced from a family that’s been doing this for four going on five generations,” Cheng says. “They don’t roast the rose and the tea leaves together, because it’s so hard to control the temperature that way. He ages them together and roasts separately, then blends them back in together.”

Cheng prepares the tea in a traditional gaiwan, a bowl-like porcelain cup with a lid, which has already been warmed up. She adds the tea and hot water to the cup, and I sniff it as it brews to detect the sweet aroma of rose petals. She pours the liquid through a filter and the “first rinse” is discarded. 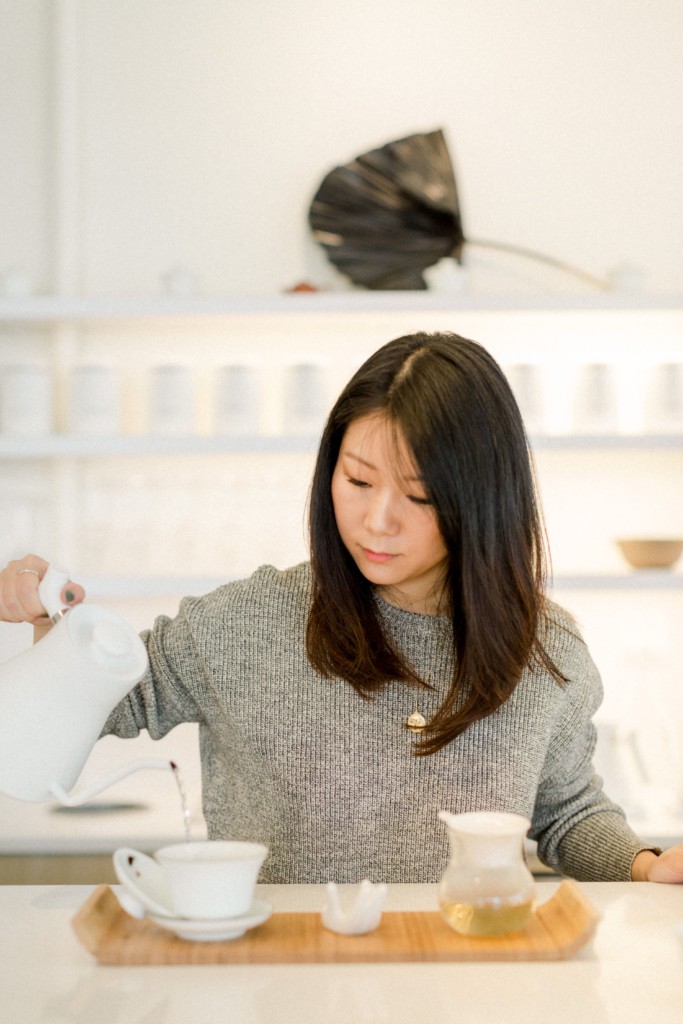 Cheng prepares tea in a traditional bowl-like gaiwan with a lid, from which the tea will be poured into tiny tea cups. Photography by Erin McGinn.

“Traditionally, the reason for this is because, back then, people didn’t have quality control, so dust may have settled on the tea. You rinse it off, but now it’s part of the ritual,” she says. “You shock the tea with a rinse so the first steep comes out infused with flavor.”

Before serving the first of three tastes of the tea, the drinking cups are also rinsed for purification, then warmed with hot water. Inside the gaiwan, the leaves are steeped six times in three, two-steep intervals, so guests can experience the changes in flavor.

After the sixth steep, the tea has expanded to five times its initial size, and the leaves nearly fill the whole cup. The sixth steep is not as strong as the first and second tastes, but it has a soft flavor that leaves a clean tingle in the back of my throat.

Ceremony not only conducts tea ceremonies, but it’s also a great place to go for full-proof and zero-proof cocktails. Handcrafted cocktails are either made with sake or tea-infused. There is a staple menu with two seasonal drinks, such as the Apple Teani (apple-infused sake with ginger, cinnamon, green cardamom, organic black tea, molasses, black pepper and cloves) and Matcha Beer (yuzu beer with a shot of freshly whisked matcha). The zero-proof drinks do not contain alcohol, but they have fun flavor profiles using teas, including oolong, matcha, lapsang, black tea and more mixed with ingredients like pickled plum, simple syrup, rice wine, coconut milk, lime juice, yuzu and much more. A current menu example is the zero-proof Honey Sour made with Oolong tea, bee pollen, raw honey, lemon and pure sugar cane. Each cocktail looks too pretty to drink, accented with flower petals and citrus. They also serve cold brew teas as zero-proof wine, including red, white and rose versions in wine glasses. 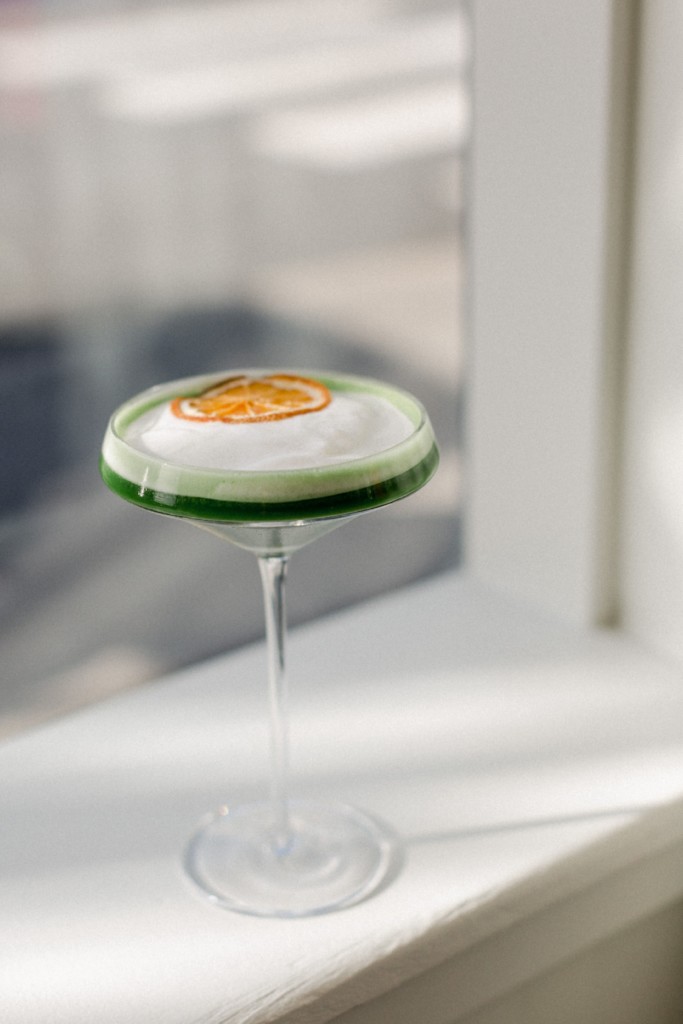 One of the most popular drinks is the dirty matcha, which mixes matcha and a shot of potent coffee from New Harvest. Perhaps that’s what keeps students coming back repeatedly, besides Ceremony being a great place to study and reconnect with friends.

Cheng is surprised that students show up right before closing time for tea drinks. “I find that our students don’t care what time of day it is. Students come in right before we close and get them,” she says. “I was worried how we would sell the tea in the evening, so this is good!”