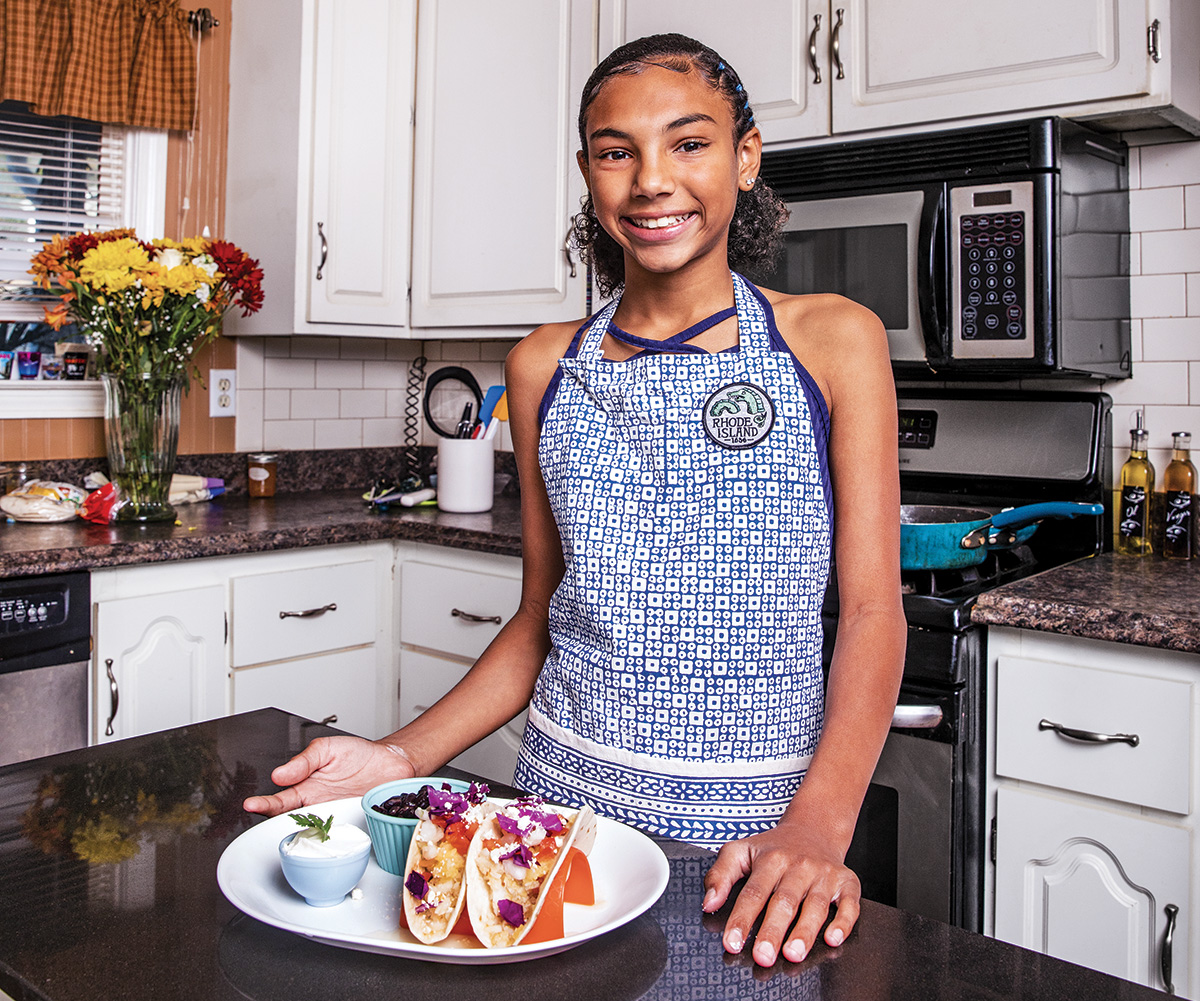 Jaala Smith prepares a meal in her home; She likes cooking for her large family. Photography by Alex Gagne.

Celebrity chef Gordon Ramsay could learn a thing or two from twelve-year-old Jaala Smith. The Samuel Slater Middle School seventh grader competed on this year’s seventh season of Fox’s “MasterChef Junior” and made it to the top eight out of twenty-four competitors. What really stood out besides her terrific culinary skills, is her positive attitude and compassion for others. On many occasions, the Pawtucket pre-teen was a source of comfort for other kids in tears after being eliminated by judges Ramsay, Cristina Tosi and Aaron Sanchez.

“It was a competition, but we were all really good friends,” she says. “We felt bad when someone would leave the show.” She keeps in touch with fellow contestants on a group text chat and they maintain great friendships.

The spunky athlete also plays football and competes in cross country races in Pawtucket while running her own jam business on the side, Jammin’ with Jaala, with seasonal flavors coming out each month. The jam sales are helping her save for college, earn some spending money and reinvest in the business.

Smith is the daughter of Jessica Smith and Jason Smith Sr., and she’s one of six siblings ages five to fourteen who reside in the household; two of the children are adopted. Smith enjoys cooking meals for her big family every night, which often call for tripling recipes to make enough food for everyone. “My parents love it,” she says, adding that her interest in cooking started when she was three. She makes a lot of pasta, but her biggest challenge is seafood. “I try a recipe but I don’t get to taste it because I am allergic,” she says.

Baking is more her passion and she hopes to attend Johnson and Wales University and open her own bakery someday. “You can really make up any recipe when you’re baking,” she says. “Even if it comes out bad, it’s fun to be creative.” –J.C. 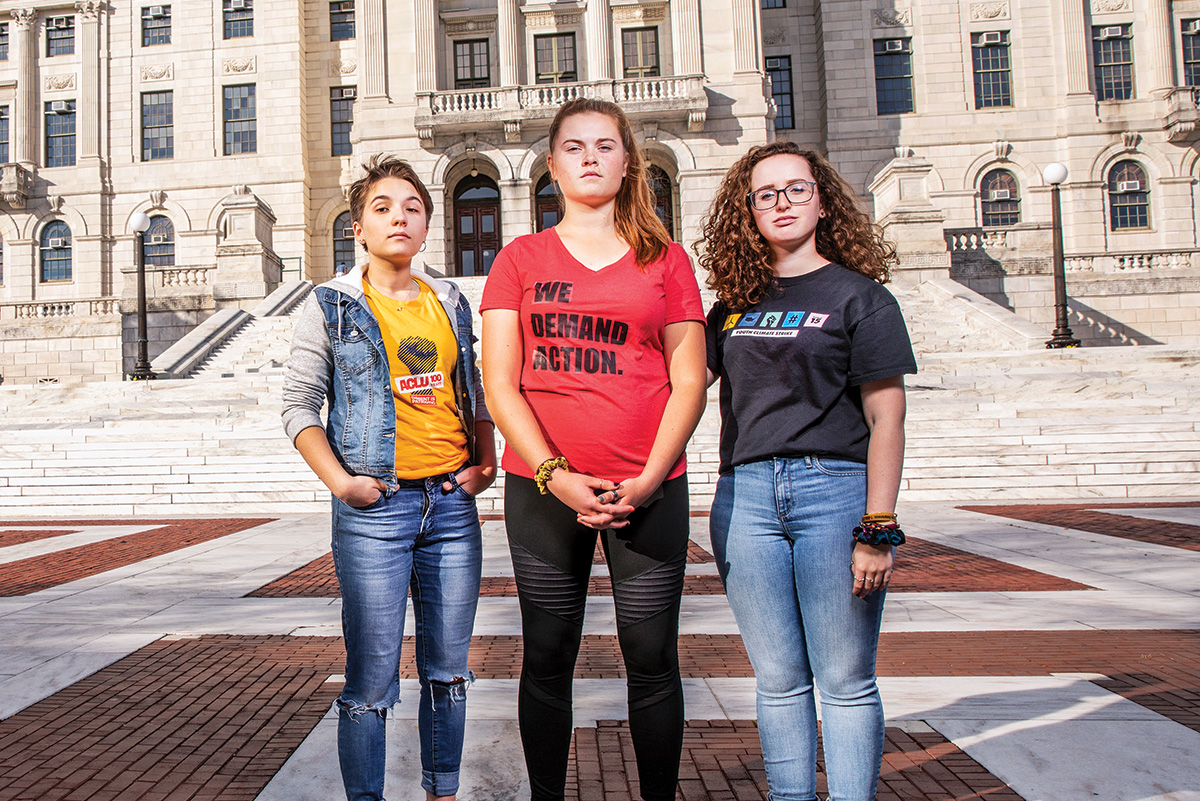 They can’t vote, but they can take to the streets. Together, teen activists Joelye Land, Sarah LeClair and China Duff organized September’s Youth Climate Strike, when 1,000 school-aged protestors marched through Providence to the State House with a litany of climate-related demands for our legislators, including fossil fuel divestment and a Green New Deal specific to the Ocean State. “I felt like we need to take greater systemic change,” says China, who spearheaded a recycling program and beach cleanups at La Salle Academy but wanted to do more. Says Sarah, who attends high school in North Providence: “If I’m being honest, showing up and seeing the throng of 1,000 people — it was probably one of the most powerful things I’ve experienced…. That sea of people were all there for the same reason: Because we’re passionate about having a livable future.” More national youth strikes are on the horizon, says Joelye, who attends North Kingstown High School and organized the first Youth Climate Strike in March with help from the local chapter of the Sunrise Movement. “If we work together, we can actually create change,” she says. “It gives me hope.” –C.N. 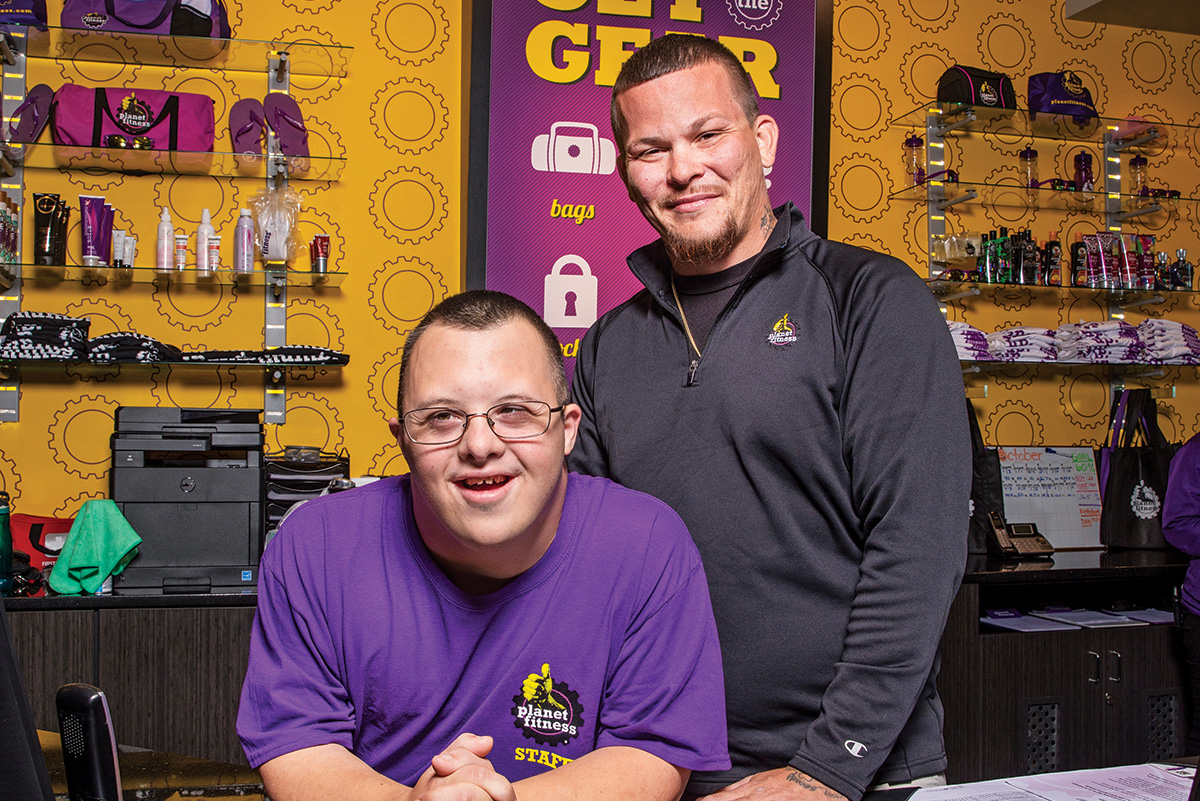 In February, Daniel Cote’s friend and client, CJ Wagner, arrived at the Woonsocket Planet Fitness wearing the wrong shoes. CJ’s home care aide forgot his gym bag at home in Burrillville and her gas cap was frozen; she was worried she’d run out of fuel on the back-and-forth trip. So Cote, the gym’s general manager, set up CJ — who has Down syndrome — with some light workouts, then ran to a nearby store. “I know he doesn’t have an arch in his foot, so I grabbed the first pair of memory foam sneakers I could find,” says Cote, who was caught on camera lacing up the new shoes for CJ. The video went viral but, to Cote, his feat of kindness was common sense: CJ needed the right shoes to avoid injury. Also common sense: This summer, CJ was looking for a part-time job, so Cote hired him. “Every time he comes in, he has that amazing smile,” Cote says. “He high-fives you and it brightens everyone’s day.” Cote, who had behavioral issues as a kid and spent time in state care, says he’s motivated to help others succeed. “Anytime anything good opened up to me, I rejected it,” he says. “So, now, if I see a good opportunity, I jump on it.” –C.N.