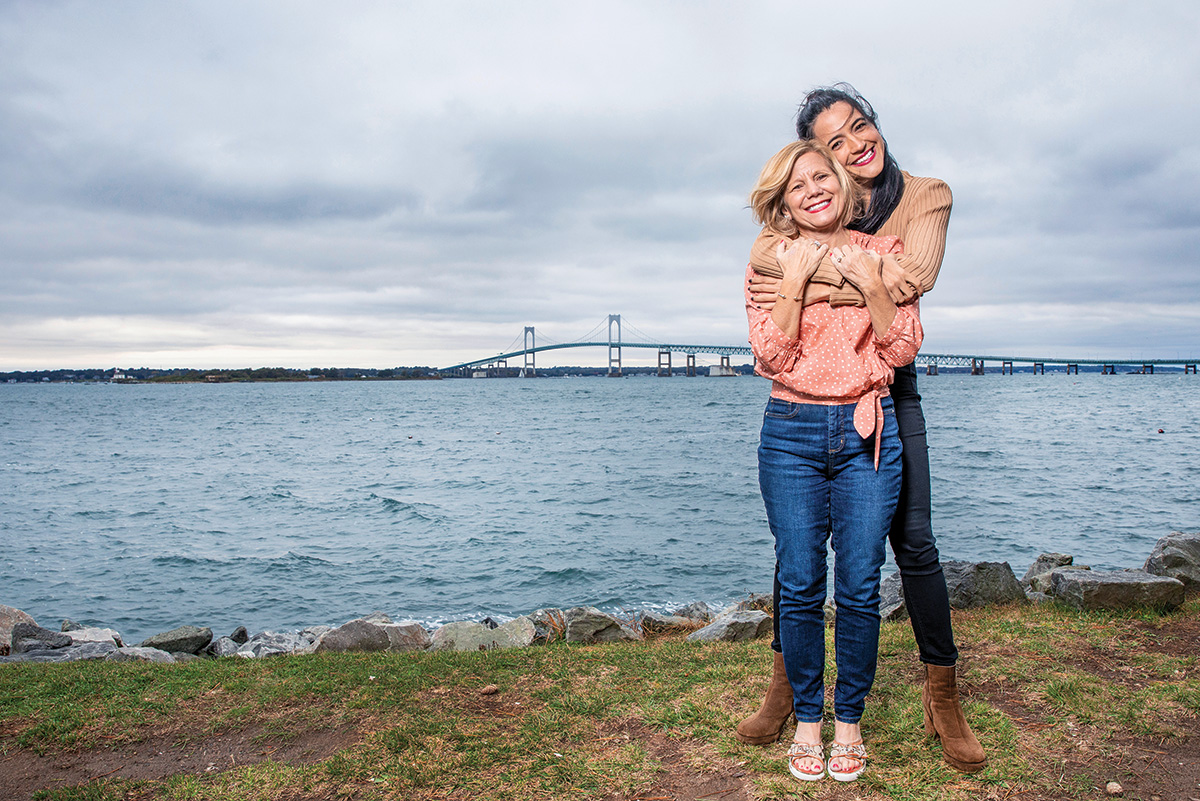 Alyssa Limperis and her mom Linda enjoy Newport when Alyssa is in town. Photography by Alex Gagne.

Comedian Alyssa Limperis has the mom we all wish we had. Some of her fans even see a bit of their own moms in her viral video impersonations of her mother, Linda Limperis, a Cranston native who grew up in the city and graduated from Cranston West High School. In the videos, Alyssa wears a short brown wig with a wavy flip — a parody of her mother’s hairstyle from years ago — paired with a turtleneck or cardigan and the famous Cranston/New Englandah accent that’s all too familiar in these parts.

Linda Limperis is in on the joke. In fact, she helps Alyssa brainstorm familiar scenarios and films every video when they’re together. There are videos poking fun at her shopping at Target, visiting New York City for the first time, helping Alyssa move to a new apartment and preparing for the holidays. In every video, Alyssa mimics her mother’s mannerisms and sayings, often with a dead-panned expression and raised eyebrows.

“I absolutely love it. So many people ask me, ‘Are you okay with it?’ I say, ‘I film them. Of course I am okay with it,’ ” says Linda Limperis, who is a Seekonk, Massachusetts, resident. “I am honored that she impersonates me. I feel like they are all rooted in real deep love: Alyssa’s love for me, and my love for her shine through.”

One of the funniest videos, with more than two million views on Alyssa’s Twitter handle, @alyssalimp, pokes fun of Alyssa’s mom “Hosting a BBQ.” Dozens of quick video clips are strung together with Alyssa reenacting things her mother would say while pacing around the house and yard: “I got seventeen bags of Tostitos.” “The guests are coming in seven hours, I’m firing up the grill.” “Do you want those sleds, or can I get rid of them?” “We’re doing buffet style. I’m not serving. Everyone can get what they want. If you see people going up more than twice, say something.” “They RSVPed no, but their car’s in the driveway. You do that math.”

The viral mom video phenomenon is actually rooted in sadness. Linda lost her husband and Alyssa lost her dad to brain cancer about four years ago, and Alyssa moved home to Seekonk for a year to help her mother care for her father while he was ill. “We were with each other all the time as adults, which was something new,” Alyssa says. After he died, Linda stayed at Alyssa’s apartment in New York for a while while they healed together.

Linda’s reaction to the city and Alyssa’s apartment entertained her daughter. “I still remember, I was in [her] apartment, and I was like ‘Alyssa, you have to clean up because you might get mice!’ It just came naturally,” Linda says.

Her reaction spurned the idea for the videos. “The first one I made was just my mom in New York City. I was shocked at how friendly my mom was to strangers where people don’t talk to you. Or how horrified she was by the state of my apartment,” Alyssa says. “My dad and I did comedy together, so it felt really fun, joyful and playful. The videos all follow what’s actually happening in my life.”

Alyssa grew up watching “Seinfeld” with her dad and the two of them did improv and live theater together, but this is the first time Alyssa and her mom bonded over comedy.

“We were each other’s lifeline, especially after going through something so dark. These videos were born from the fact that we knew each other so well, it was almost pouring out. We had spent so much time in close quarters together,” Alyssa says. “That’s why I am grateful for comedy and art. They help you when you don’t know what to do with all your feelings and you have to put them somewhere.”

The mother and daughter are proud of the loving persona they have created together. Linda enjoys reading through the comments when a new video is posted. Many of them have been filmed locally, when Alyssa — who is now based in Los Angeles — comes back home.
“When it goes live, it’s the best feeling for me. You can feel the love through the comments from people I would never know,” Linda says.

“A lot of the comments will say, ‘I wish I had a mom like this.’ ‘You are so lucky to have a mom like this.’ ‘Can I have this mom?’ ‘Can I borrow this mom?’ ” says Alyssa. “Moms don’t get appreciated for the insane amount of work they do, so I think these videos, and seeing this reaction, I am happy that my mom is getting the love and recognition she deserves.” –J.C. 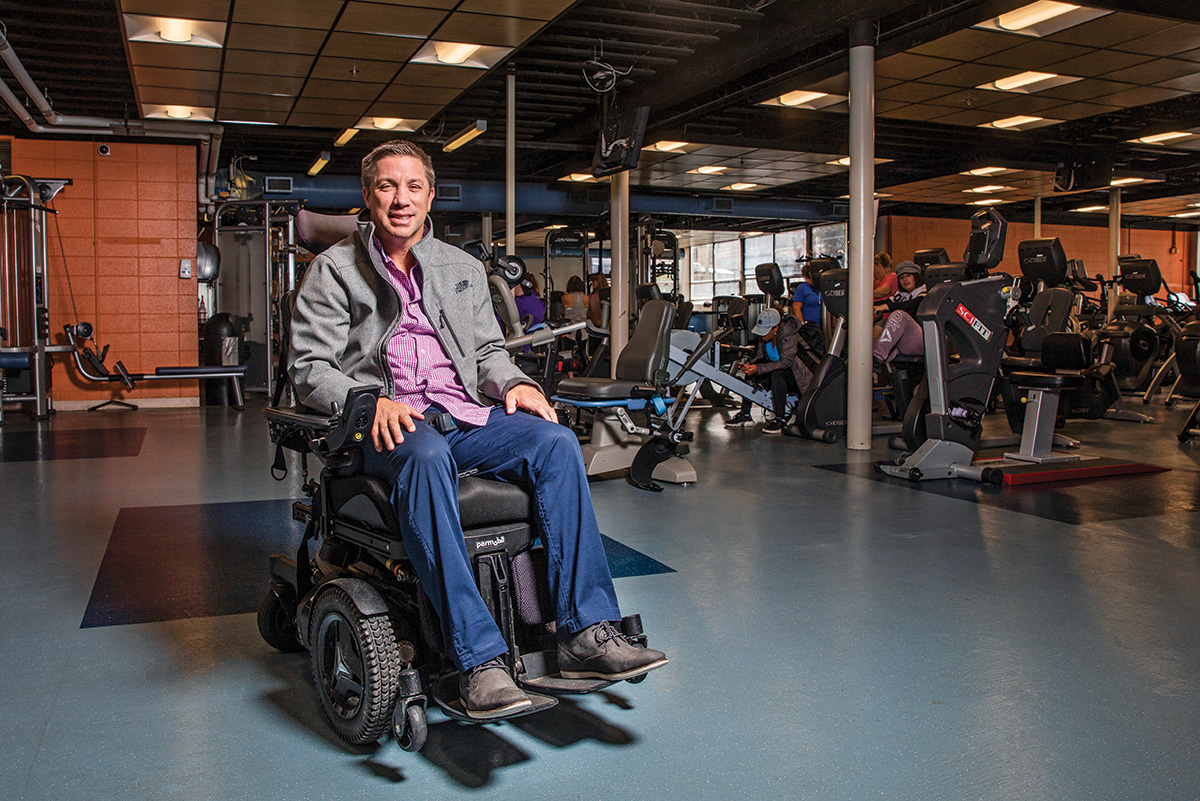 Gary Balletto at the adaptive gym in the Cranston YMCA. Photography by Alex Gagne.

it was six years ago when former boxing champion, Gary “Tiger” Balletto, was critically injured while playing with his son in his very own backyard. The then-active and in shape thirty-eight-year-old was practicing pull-ups when the bar broke and sent him crashing to the ground. Balletto suffered a life-changing spinal cord injury as a result. After working with a physical therapist and months of rehabilitation, he soon realized that he wanted to get back to the gym — except there were none in the state that accommodated people with spinal cord injuries. “I told my friends that I wanted to build a gym in Rhode Island for people with these types of injuries, where they could go to maintain their muscles, stay healthy and exercise,” he says. “There are almost 20,000 people in the state of Rhode Island who have paralysis and had nowhere to go. I just couldn’t believe it hadn’t been done.” So, Balletto got to work.

He partnered with the Cranston YMCA and in July of this year, the adaptive gym, complete and made up of several pieces of adaptive equipment, opened to the public. The 2,500 square feet of space is overseen by specially trained staff including a neurological fitness specialist and is integrated within the rest of the gym space at the YMCA. “Not only was it my vision to have a place to exercise, but also a place where I could go with my family and friends to exercise together,” says Balletto. The gym was funded by the Gary “Tiger” Balletto Foundation and can be used by anyone with spinal cord injuries by simply joining the YMCA’s monthly membership program. According to Balletto, the adaptive gym now has twenty-one members, many of whom have thanked him for creating such a specially designed place. His response? “I feel that it is a human right to have access to a gym,” he says. “They are thanking me and treating it like it is a luxury, but this should be a standard for every single person. Anyone with injuries like this should be able to use a facility that they can exercise in and use whenever they want to, just like anyone else would.”

And besides opening the adaptive gym, members also have access to a support group. Not only can they stay healthy and exercise, but they can also learn how to get back to work while living with a disability.

“You never know what tomorrow will bring,” says Balletto. “But my hope for the future is that over the course of the next year, we will fine-tune this model and learn a way in which we can implement what we have here into other YMCAs throughout the country for other people with spinal cord injuries to use, too.” –S.L.