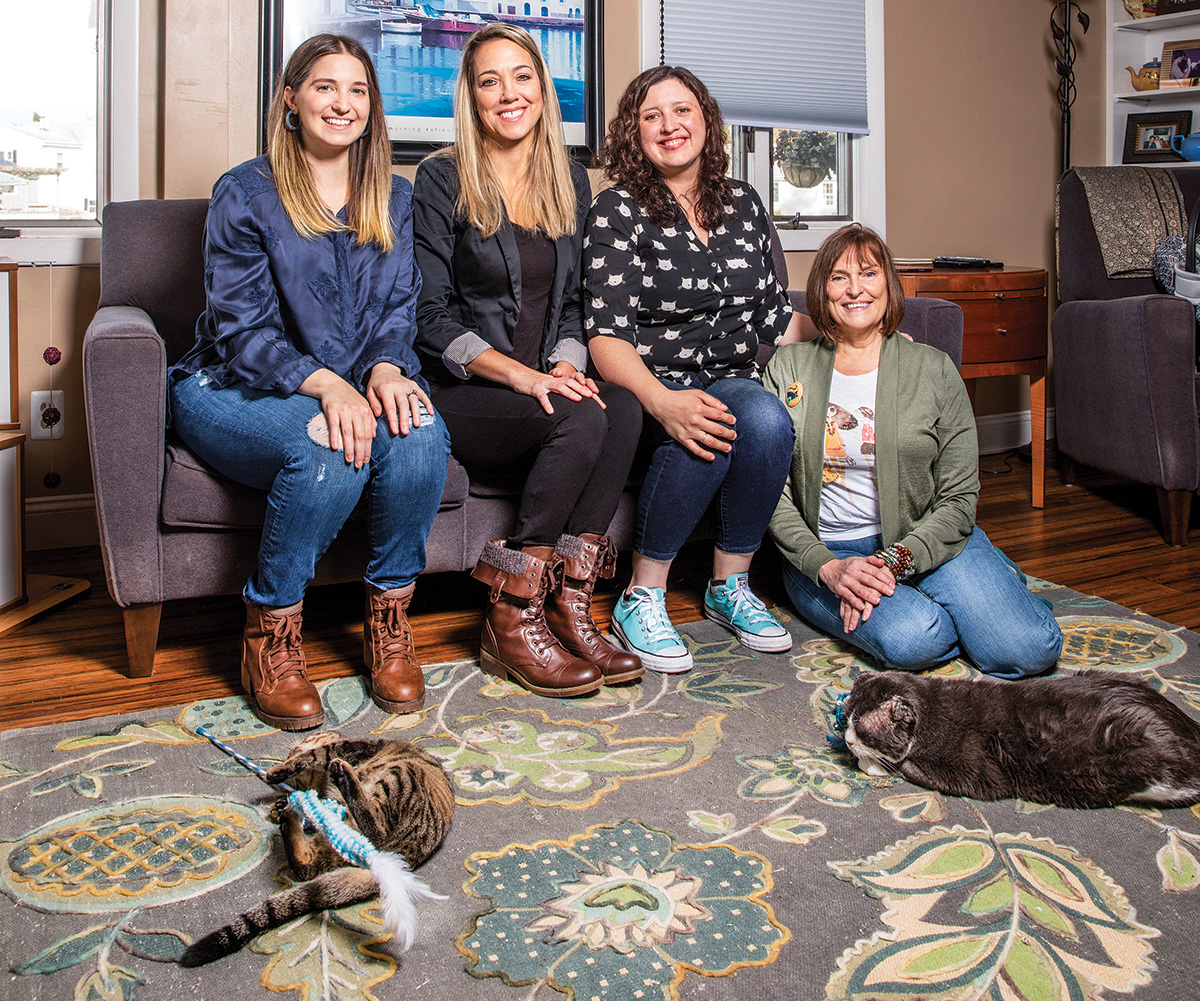 Melissa Rodas will tell you that cute, fluffy kittens are easy to find homes for. Forgotten felines — feral or older or sick — not so much. Rhode Island has 75,000 homeless cats, vulnerable to attack by other animals, disease and starvation. Rodas and her volunteers at Ten Lives Cat Rescue are working to get these cats off the streets and into safe, loving homes.

There’s no bricks and mortar building; Ten Lives depends on fosters to work with pregnant and feral cats and those with serious medical needs. Since they launched last year, they’ve taken in 353 cats and found homes for 263; about seventy-five are being cared for and waiting for adoption. And then there are the vet bills, which can be hefty. “There’s a lot of penny pinching,” Rodas says. “It keeps me up at night. My least favorite thing is to ask people for money, but people are incredibly generous, and we partner with vets who realize we’re a rescue.”

Rodas lives in Pawtucket and works in Boston. She says her biggest need is for more fosters. “We have twenty outstanding requests we can’t handle because we don’t have temporary homes for them,” she says. She started fostering, saw the need, and felt compelled to start her own rescue. The last year has been a whirlwind she says, but “there’s satisfaction in helping these cats find incredible homes.” –S.F. 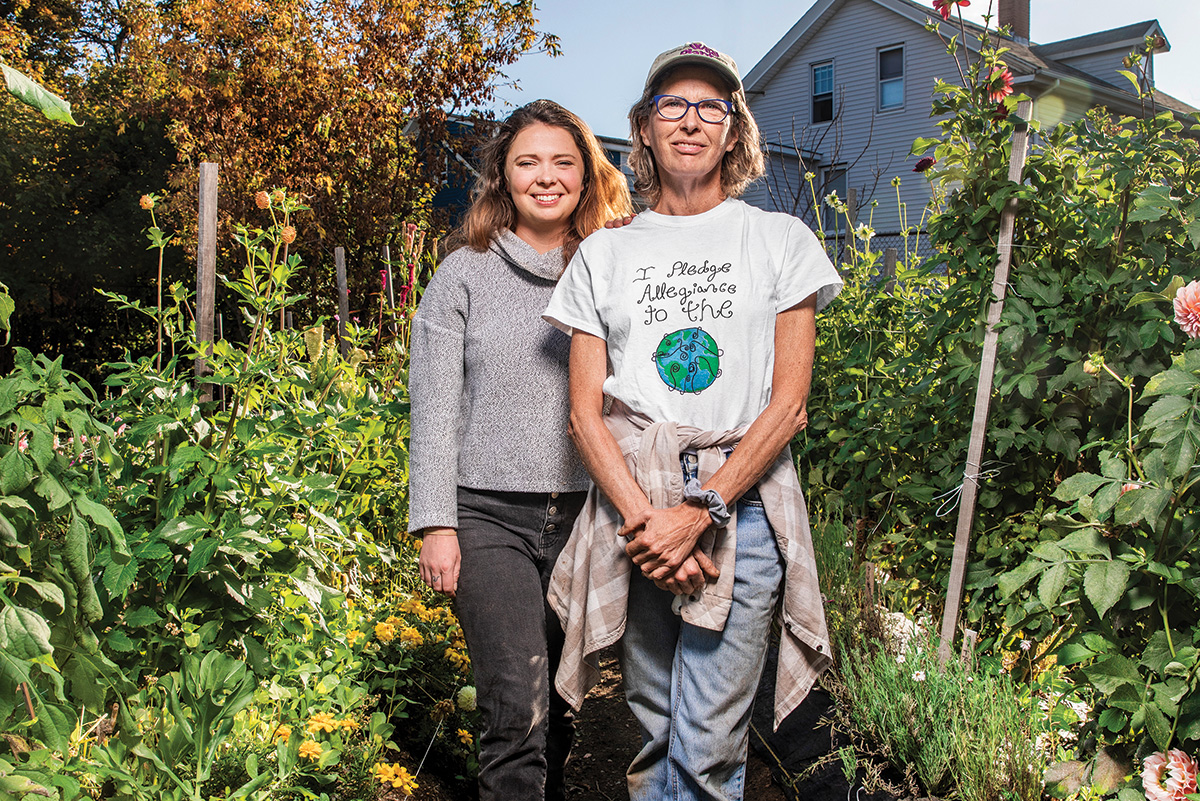 Shelby Doggett and Marian Purviance at What Cheer Flower Farm in Providence. Photography by Alex Gagne.

This year, Doggett’s bevy of volunteers at What Cheer Flower Farm have brought 30,000 free dahlias, sunflowers, snapdragons, peonies and other brilliant blooms to patients in hospitals and retirement homes, as well as new moms in substance recovery, Meals on Wheels recipients, families at Ronald McDonald House and patients with dementia at PACE, a wraparound service for older Rhode Islanders.

“One of my favorite parts is seeing how clients use flowers in therapy or painting sessions,” Doggett says.

All the flowers are grown on What Cheer Flower Farm’s 17,000 square feet of remediated land in Olneyville on what was originally a parking lot and litter-filled dumping ground for twenty years. When she started hunting for a suitable location, Doggett’s mission was to buy an acre in Providence, on a bus line. She also wanted to provide free flowers and green opportunities to the nearby community. “I grew up in Providence,” she says, “and I wanted the people here to experience urban farms.”

Once she found the perfect spot, near a Route 6 concrete overpass, she used a $50,000 grant from the Department of Environmental Management to deal with the brown site. That meant capping the contaminated dirt, covering it with clean soil, and making sure it passed DEM standards. This was before she could put a single plant in the ground. She used the prep time before the closing in spring of 2018 to map out a business plan. “It was very helpful in getting everything organized,” she says.

The rest of the What Cheer property, originally a 2.7-acre site of the former Colonial Knife factory, is still a haz-mat stew of contamination, from arsenic and petroleum in the abandoned buildings to roofs in danger of collapsing. Needless to say, Doggett and her crew don’t venture inside. “We were very lucky the contamination didn’t cost billions to clean up,” she says.

One hurdle early on in the first year was the lack of running water. The property didn’t have plumbing or electricity. Doggett and her helpers wrangled permission to use a city hydrant but still had to water the field by hand, which was hugely time consuming. “The neighbors would bring us ice cream,” Doggett says. Now What Cheer has a regular water supply; a new barn in the near future will have AC and a bathroom will replace the port-a-potty.

Farming has been in Doggett’s DNA since she was a kid. She graduated from University of Vermont with a degree in ecological agriculture, and later worked as an urban garden trainer in Woonsocket. Her What Cheer co-founders, horticulture director Marian Purviance and board president Anne Holland, are also passionate gardeners.

Choosing what to plant is part of the satisfaction, creating what Doggett calls a wild but curated selection. She’s drawn to bright colors and Purviance likes to import seeds from England. “They’re not your typical grocery store flowers.” They follow flower trends and pick plants that do well with a long vase life.

“We like to wow recipients,” Doggett adds, “I love when they ask what the flowers are.”

And just because the growing season has wound down doesn’t mean things have slowed much. There’s lots of admin work, fundraising, tracking what plants grew well over the summer and which were fails, as well as expanding the 200-plus list of valuable volunteers, who do everything from delivering flowers to teaching hospital patients how to arrange them.

Everyone deserves a bouquet, Doggett says, and flowers matter. “You don’t know how far they will go when someone’s having a bad day.”–S.F.