It’s been another hair-pulling, high-decibel year, so it’s a good time to stop, take a deep breath and applaud Rhode Islanders who’ve made our corner of the world a better place in 2019. These are our neighbors and friends who’ve accomplished impressive things, not because they’re paid to, but because they feel driven to do the right thing. So whether it’s a twelve-year-old master chef or a mom and daughter comedy team whose videos have gone viral, these are the people who made us proud and made us smile, through their persistence, imagination and passion. 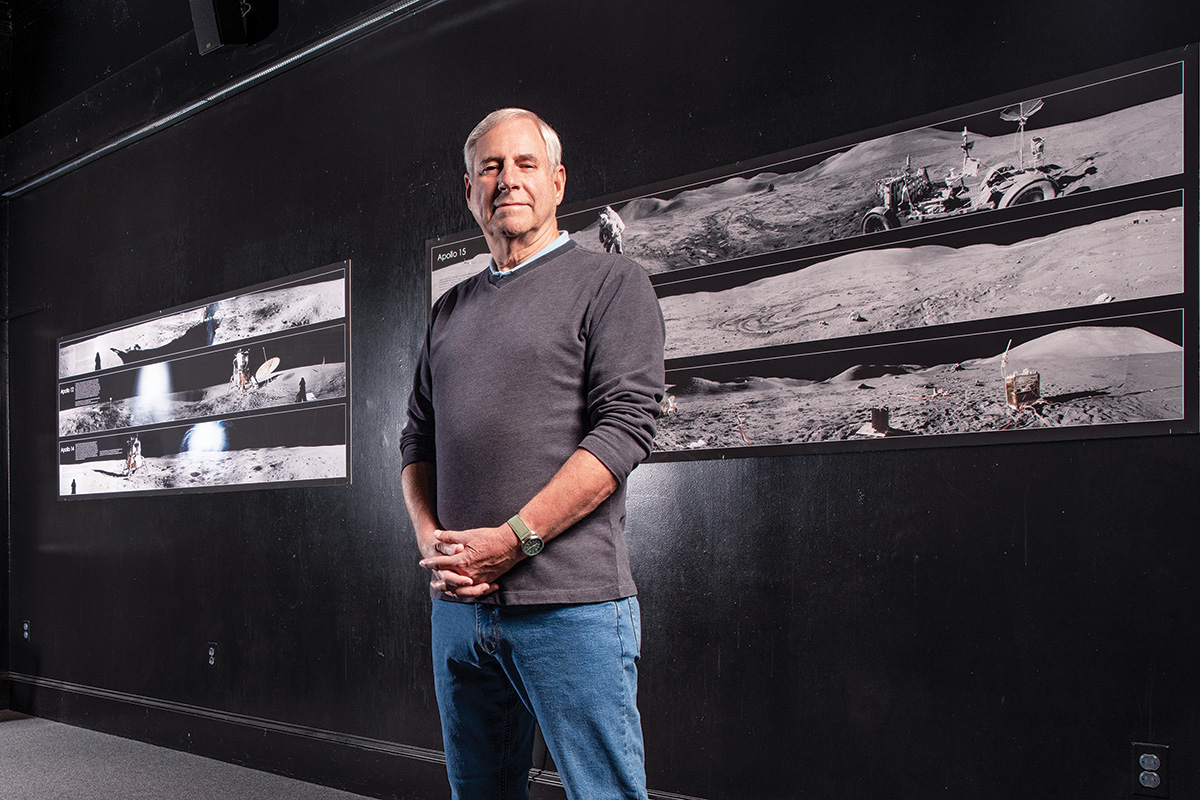 Lonnie Barham visits the Museum of Natural History and Planetarium at Roger Williams Park’s newest exhibit, “Many Inspired Steps: Salute to Apollo 11 and Lunar Exploration.” Exhibit made possible with a grant from the NASA RI Space Grant Program and support of the Northeast Planetary Data Center. Photography by Alex Gagne.

2019 has been a big year for significant birthdays: it’s the thirtieth anniversary since the debut of the Energizer Bunny, the fortieth anniversary following the demise of the AMC Pacer and, of course, fifty years since the first man landed on the moon. And yet, Warwick’s tiny Conimicut Village, population 2,500, was the only place in the country to throw a parade in honor of this lunar milestone.

When Lonnie Barham, Conimicut resident and passionate space nerd, heard that, he was gobsmacked. “I assumed the Jet Propulsion Lab or the Johnson Space Center would have one,” he says, “but not a single parade.”

Barham convinced the Conimicut Village Association to correct this apparent snub and sponsor the July 20 event, on what turned out to be the hottest day of the year. There was a float of a recreated Apollo 11 command module built by Toll Gate High School students as well as moonpies and food trucks. Rhode Island’s only astronaut, Woody Spring, was grand marshal. The march, which meandered three quarters of a mile through the village, finally landed at the American Legion on West Shore Road where monitors streamed videos of the moon landing. Donations from the Rhode Island Foundation, Brown University and others underwrote the celebration, which attracted some 2,000 sturdy spectators. Barham and the other organizers were thrilled with the response and he has big plans for the next parade in 2022 for another fiftieth anniversary, this time Apollo 11’s final lunar mission.

If he can convince his wife, Virginia, that is. She did a lot of work on this year’s event, he says, but she’s not hot on doing another. Lonnie still has time to change her mind. “I’d like to do it again,” he adds. “It would keep the publicity of space travel going.” –S.F. 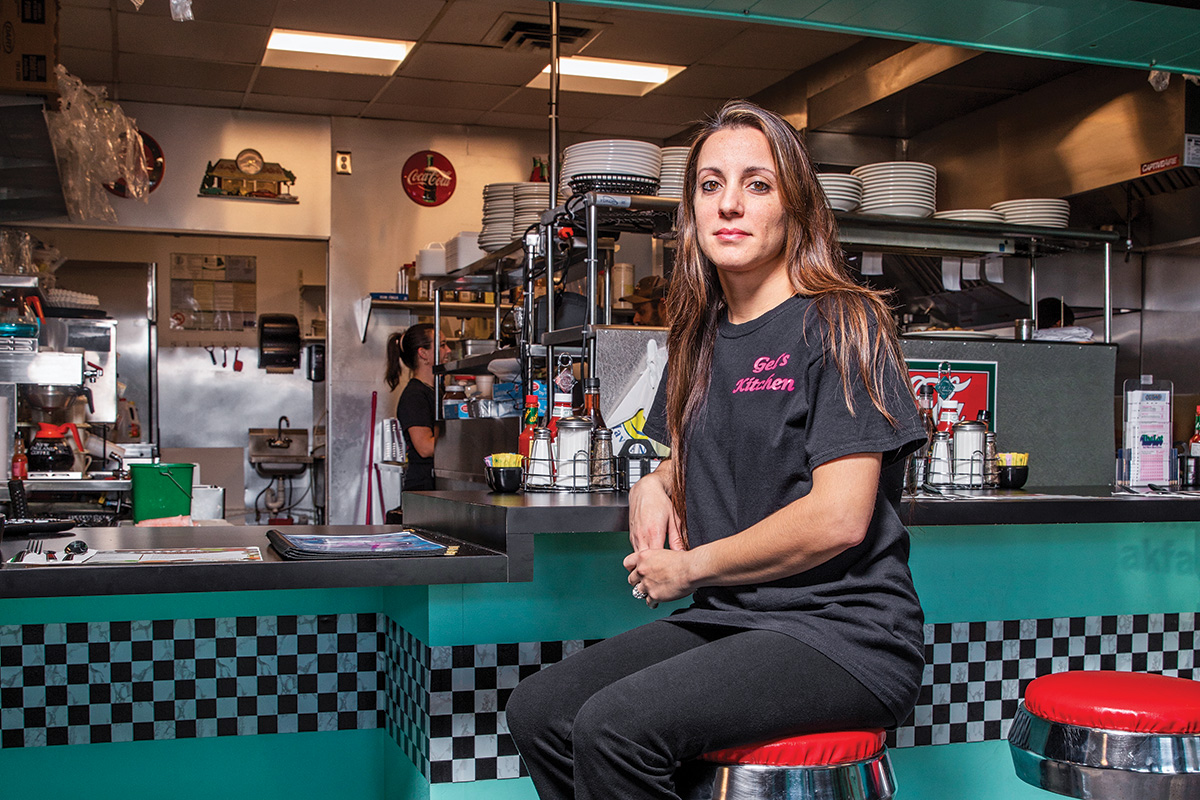 It’s the busiest day at Gel’s Kitchen in West Warwick, where regulars come in for 99-cent wieners all day. But one Wednesday in April of 2018, Gel’s proprietor, Angelica Penta, had more on her mind than meat sauce.

The previous night, she’d seen a social media post about a lunch shaming in West Warwick. One of Penta’s customers, a parent of a local student, had the scoop: The high schooler’s lunch account was in arrears, so the hot meal she ordered was thrown away and replaced with a cold cheese sandwich. Her account was still charged for the lunch that was tossed.

“I’m very, very sensitive, so I just started tearing up,” Penta, who has a high schooler of her own, says. “I couldn’t even work.”

She put up jars at the restaurants she owns with her husband in West Warwick and Warwick and raised about $2,000 in one week, with plans to cover the girl’s lunch debt and donate the remainder to West Warwick Schools’ year-end tab with its caterer. Her customers kept donating and Penta accumulated about $8,000 by January of this year.

Since she was raising funds in her Warwick restaurant, Penta wanted to contribute to the city’s schools, too. She contacted Warwick Public Schools’ financial department, which declined her donation — the disbursement would be tricky, since they have thousands of kids with outstanding lunch debt — while assuring her they didn’t, as a policy, toss hot lunches ordered by kids with overdue accounts. But in May of this year, Warwick Schools sent an email announcing that students who owe money would receive Sun Butter sandwiches. The students order first, then pay, which meant more food in the landfill and more embarrassed kids.

Warwick continued to decline her donations, so Penta found someone on the inside who was sick of seeing kids cry at the register every day. That person used Penta’s donations to pay for lunches for indebted students, but this charitable subterfuge was only happening at one school. Penta wanted to help more kids.

After a lot of thought — Penta says she received hate mail accusing her of enabling irresponsible parents; she feared her businesses would suffer — she took to social media on Sunday, May 5, and offered to help families with debts individually, since the school department wouldn’t accept her donations. Her post went viral and, by Wiener Wednesday, the story made national news. Journalists, advocates and parents from around the country rang her restaurants all day. Then, Alec Baldwin was on the line.

“I thought somebody was messing with me,” she says. “I said, ‘Hold on, let me get off the phone with CNN.’ ”

Baldwin offered to call back and, when he did, he asked Penta what she needed from him. Money was rolling in for Warwick — two GoFundMes, the yogurt company Chobani and the daytime TV program “The Talk” raised about $200,000 — but West Warwick, which accepted Penta’s original donation without issue, was left in the shadows.

Penta took a chance and asked if Baldwin would attend a fundraiser for the West Warwick district. The actor — who has a soft spot for Rhode Island; he helped save Central Falls’s public library from closure in 2011 — agreed, and Penta is planning the event for the spring of 2020.

Since the outcry, Warwick reversed course on the Sun Butter policy; the funds raised are held by West Bay Community Action and families in need can apply for lunch grants. West Warwick abandoned its cheese sandwich policy, too, back in 2018. Penta says she’s glad students, from kindergarteners to high school seniors, won’t be subject to public shaming in the lunch line. She credits her community, both in her restaurants and on social media, for bringing attention to the issue.

“You just don’t know people’s story,” she says. “You don’t know and, either way, it’s not the kids’ fault. Everybody needs help. I was a single mom with my son and, trust me, I needed the help, too.” –C.N.