Co-owners Sasha Goldman and Chelsea Morrissey are curating a collection of cheeses from small, family-owned dairy farms in New England, the Midwest and Europe. 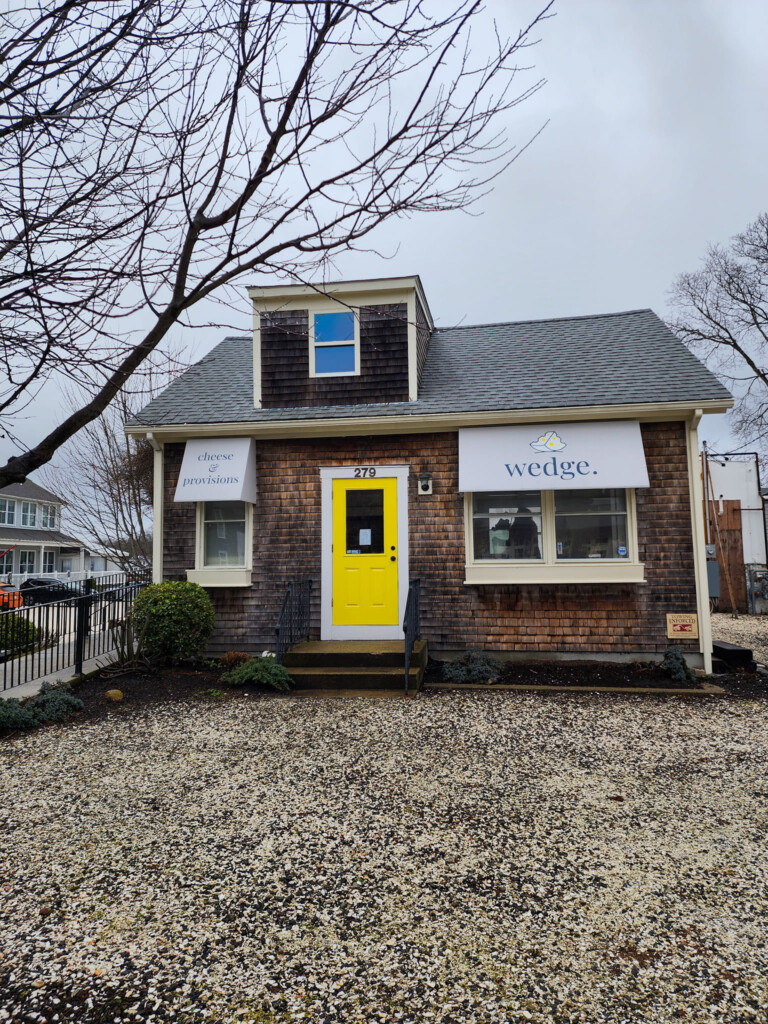 Cheese fiends no longer have to drive to Providence or Tiverton to get their hands on artisan cheddar or sheep’s milk gouda from small family-owned New England, Midwestern and European farms. Two local moms, Sasha Goldman and Chelsea Morrissey, have opened their very own cheese shop, Wedge, in a small cape house on Water Street in Warren, right across from Bywater restaurant, and in front of what will soon be the new location of Chomp Kitchen and Drinks.

The two women have five girls between them – Goldman has three daughters ages eight, eleven and fourteen, and Morrissey has two girls, ages five and eleven. The business partners became friends through their daughters, and they founded Wedge cheese shop under Five Girls Provisions LLC to pay homage to their bond. While doing construction in the business, which used to be Muse jewelry shop, all five girls signed the wall behind the cheese counter before it was tiled over for good luck. 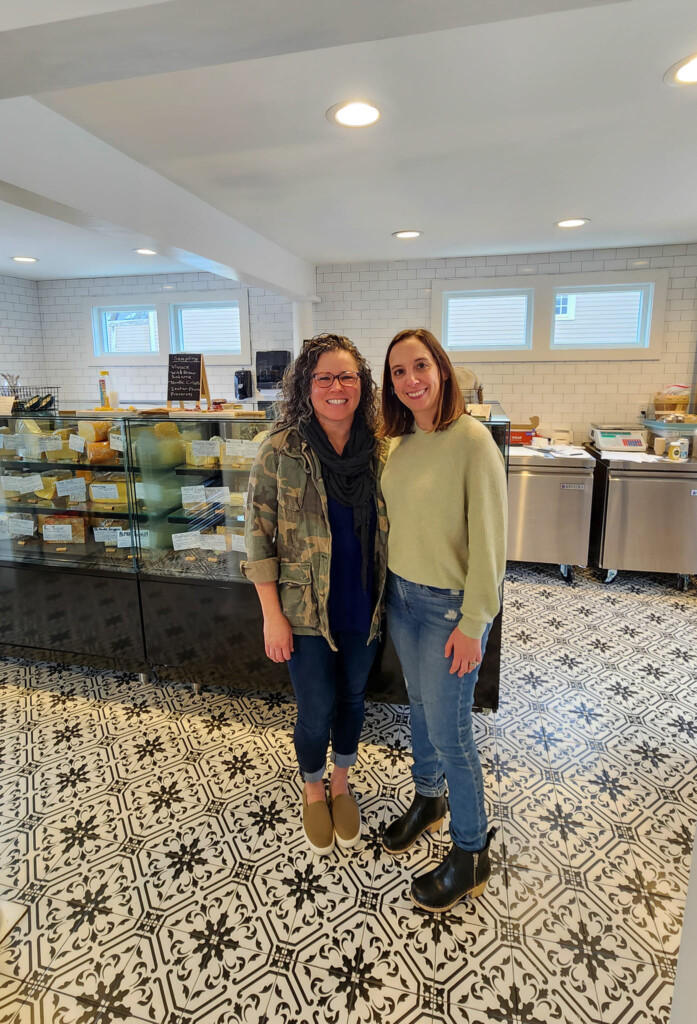 Goldman moved to Barrington during the pandemic due to her husband’s relocation to work for the family business, Big Blue Bug Solutions, as an attorney. They had previously lived in Newton, Massachusetts, for eight years, and moved around a lot before that. Goldman earned a Ph.D. at Columbia Journalism School, studying the role of narrative in American life. When the world slowed down in 2020, she was bored at home and started making creative cheese boards for fun with her girls.

“I loved the creativity of making a cheese board and trying new things,” Goldman says. “It’s a fun way to eat, to have little nibbles of different things.”

She decided to look into owning a business with her friend, Morrissey, who currently works at Hasbro as the director of strategy for the gaming team. Morrissey graduated from Villanova and earned her Masters from Babson, but loved working for a small family-owned farm growing up.

“I always wanted to own my own business,” Morrissey says.

They decided Warren was the perfect place to do it.

“I just felt like Warren is so cool. There are so many cool restaurants; I love Bywater,” Goldman says. “It has such a nice vibe with so many independent shops. We thought it was something this area could use.”

After looking at a few other locations, Goldman and Morrissey thought about how perfect their current location would be, even before it became available. As soon as it was up for lease (through Sam Glynn who owns Chomp), they went for it. “This is such a perfect location with parking and it’s a great walking area,” Morrissey says. They crowdsourced the design for their logo, which is a wedge of cheese, that they use on all the retail merchandise from hats to aprons. “We wanted a logo, like an icon, that would be able to stand alone without the word Wedge,” Morrissey says. 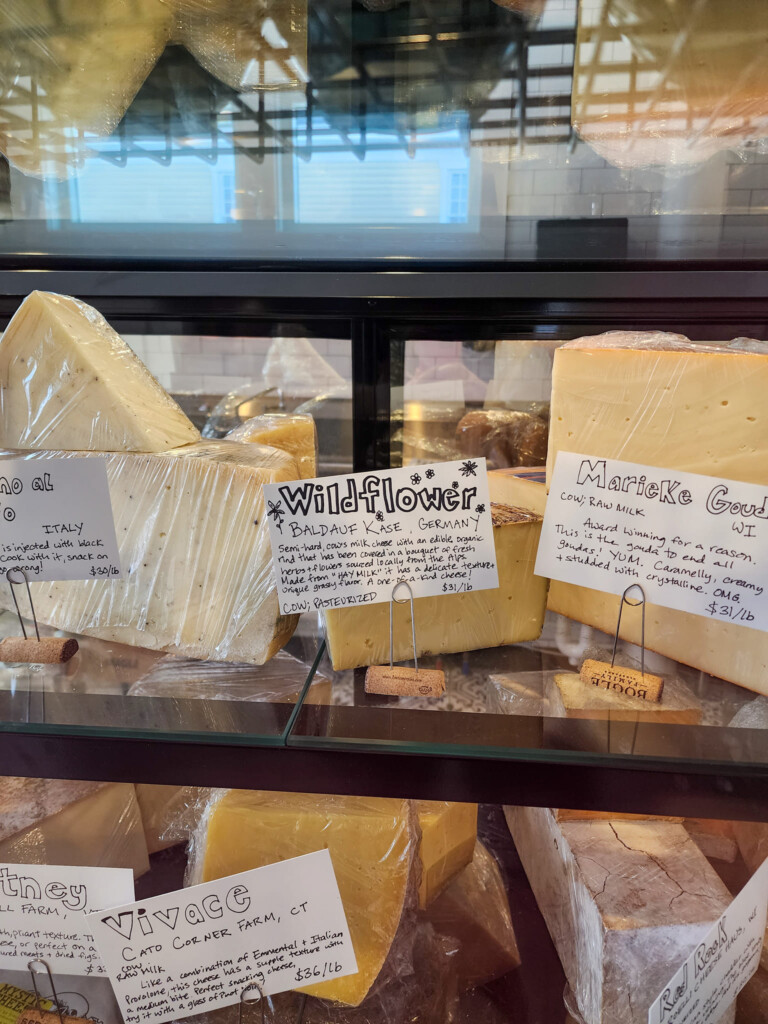 A selection of cheeses at Wedge.

The partners spent time traveling throughout New England to discover some of the smaller cheese farms they feature in the shop. “Some of the cheeses, we source directly from the maker or dairy farm. I went to a bunch of places in Maine this summer,” Goldman says. “We want the smaller stuff, the ones you won’t find in a big store. We build the relationship, then they ship it to us.”

They also built a relationship with Hope and Main to stock some of the products from local makers, including Kristi’s Kraftails mocktail and cocktail mixers and Hawt Chocolate bon bons. They have also  sourced honey from a Barrington beekeeper and handmade pottery from a Barrington ceramicist. They love featuring both women makers and cheese farmers. 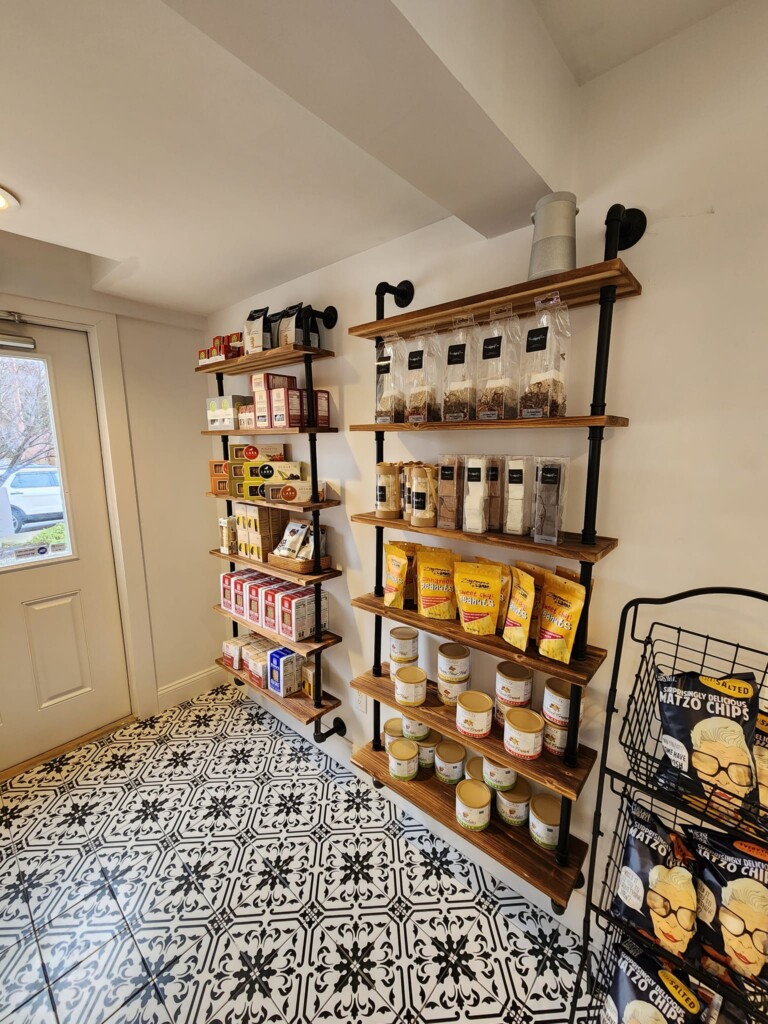 Some of the local products available at Wedge.

Creating ready-to-serve cheeseboards is a talent they’ve mastered. They offer several versions, including large and medium, as well as a dessert board, which come displayed on a beautiful wooden board or palm leaf trays. There is a certain formula for each one. 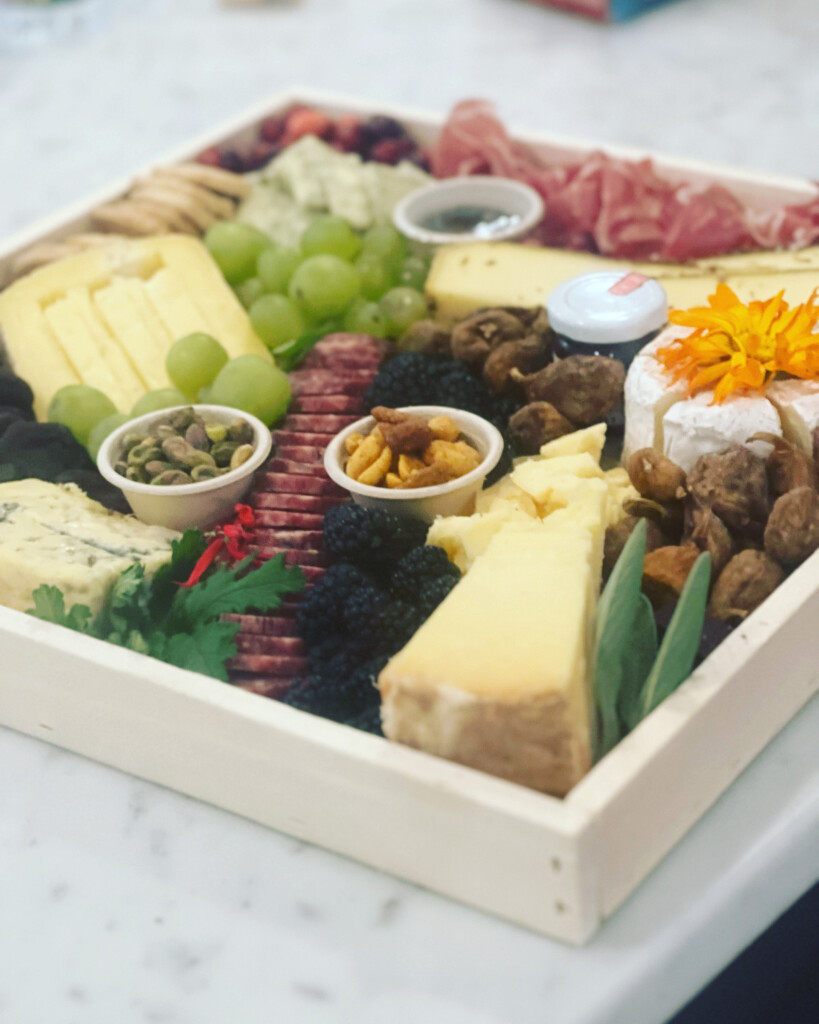 A cheeseboard available for sale at Wedge.

“We try to have one soft cheese, and then one hard cheese that’s a definite crowd-pleaser, a cheddar or alpine-stye cheese, and then something that’s a little more out there,” Goldman says. “We like to include a local honey, a preserve, a couple crunchy things, and we like to put a little chocolate on too.”

But each one can be personalized. “If they are adventurous, or if it’s a bunch of foodies who want to go for it, we’ll do something more fun,” Morrisssey says, “but if they are more conservative, we tend to go safe.” 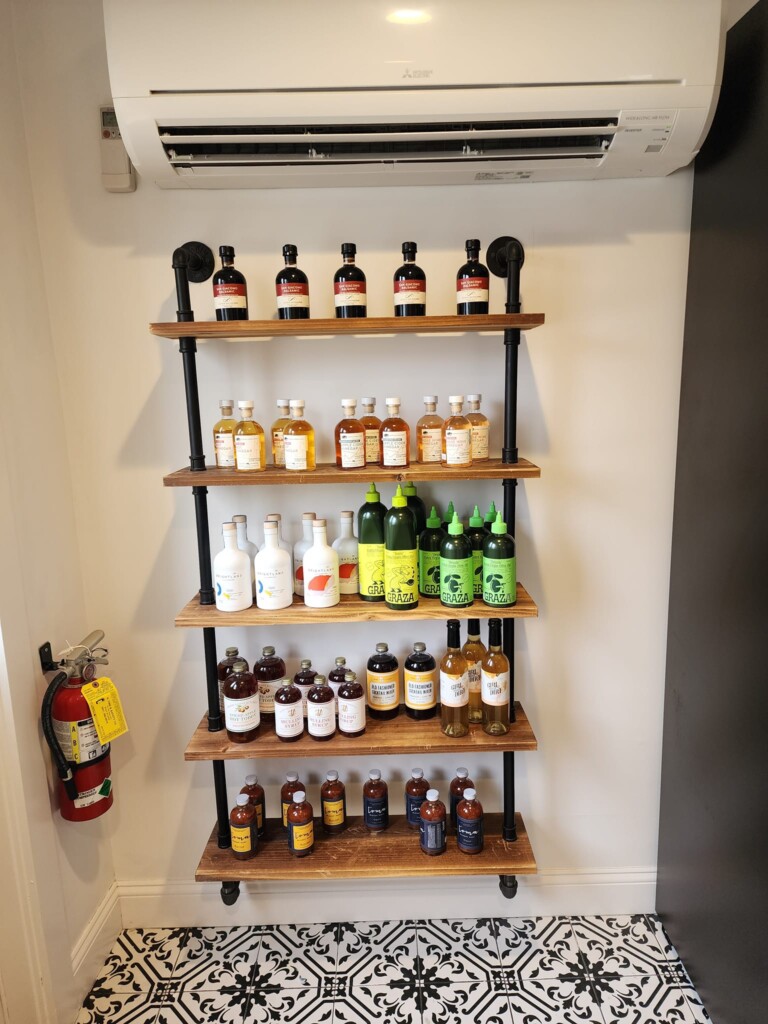 There’s also a dessert board that is perfect for bringing to someone’s house for a get-together. “It has biscuits, honey, fresh fruit, dried fruit, crumbled gouda, and a soft cheese that’s rolled  in flower petals,” Morrissey says.

Here are some of their favorite varieties of cheese, available in the shop, where guests are invited to taste before they buy.

“Semi-hard, cows milk cheese with an edible organic rind that has been covered in a bouquet of fresh herbs and flowers sourced locally from the Alps. Made from ‘haymilk,’ it has a delicate texture and unique grassy flavor. A one-of-a-kind cheese!”

“Like a combination of Emmental and Italian Provolone, this cheese has a supple texture with a medium bite. Perfect snacking cheese; try it with a glass of Pinot Noir.”

“Rich with an assertive tang of umami and salt. Dense and delicious.”

“Cold smoked with organic local Applewood, made with whole milk from Jersey cows. Fresh and light but rich in creaminess and flavor. Made with just a dash of salt, and savory smokey flavor.”

“Trillium is a triple cream, bloomy-rind cheese inspired by classic French Camembert and Brie. It has a soft, buttery texture with rich smooth flavors.”

Get a Fresh Taste of Italy at Mozz, Newport’s Newest Cheese Shop