The Wilbury Theatre Group and WaterFire are continuing to work together alongside Olneyville’s Troop restaurant, which provides food and drink for patrons, to come up with new ideas to bring more performances outdoors. 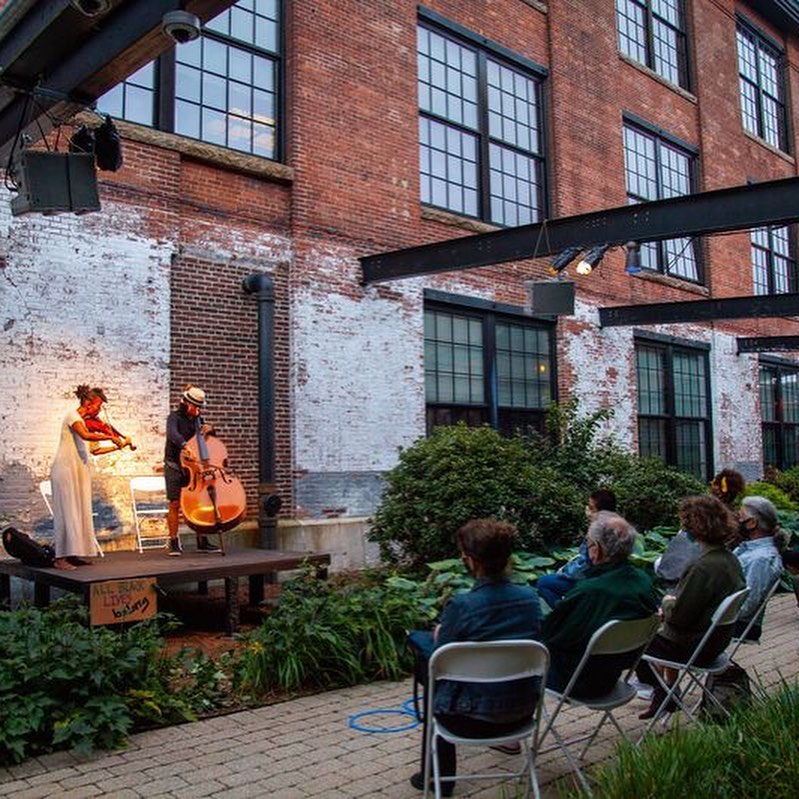 In August, the Wilbury Theatre Group and WaterFire Providence collaborated to put together a terrific outdoor theater experience, Decameron, Providence. The fourteen-day al fresco traveling performance was recognized in an article by the New York Times, and featured ten different outdoor performance stages spread out over the WaterFire and ALCO building campus.

In the NY Times article, the Wilbury’s artistic director Josh Short says: “It would be easy to shut the doors and hunker down until there’s a vaccine, but times like this is when theater and storytelling is so important.”

For Decameron, the performance spaces were divided into ‘East’ and ‘West’ zones, which each included five artists and five performance spaces, and the audience was invited to partake in one zone for each night they attended. “When the NY Times did their article, we were sold out every night after that,” says Wilbury Group volunteer and food and beverage director Andrea LaFazia, who leads catering at Troop restaurant.

We may have missed promoting Decameron before it took place, but thankfully, the Wilbury Theatre Group and WaterFire are continuing to work together alongside Olneyville’s Troop restaurant, which provides food and drink for patrons, to come up with new ideas to bring more performances outdoors.

The Wilbury Group has been running a separate project called Front Porch Performances, where people can hire the group to put on small theatrical experiences in their backyards as a fundraiser for the arts group. LaFazia helps organize food and drink for the Wilbury Group’s Fringe Festival as well as the outdoor theatrical performances with the full support of Troop.

She describes how the idea for a revolutionary way to bring theater outdoors took place. The Wilbury Theatre Group and volunteers were in the middle of planning the Fringe Festival when things began to shut down. “All of a sudden the pandemic happened, and we were in meetings and going through the process of trying to figure out how to turn it into a virtual festival,” LaFazia says. “We came up with this idea to do Front Porch Performances to promote the Fringe Festival and also to raise money for the Wilbury.”

While big festivals were no longer allowed, small groups could still gather in a socially-distant fashion outdoors. “I said let’s just bring pieces of the Fringe Festival to people’s backyards,” LaFazia says. “It will be a great way to raise money, a great way to build community, and a great way to remind people they love art and theater and inject hope and fun into an otherwise not super-hopeful summer.”

Interested parties can still contact the Wilbury Theatre Group to set up private backyard or front porch performances. “Troop provides catering and sets up the bar, and we bring up to three performers,” LaFazia says. “We don’t tell anybody who they are going to get, so there’s this element of surprise in the whole thing. That keeps it really fun.”

Troop restaurant has been completely supportive throughout the volunteer effort for Decameron and the Front Porch Performances. Even though it’s also a struggling business, it’s still making every effort to support community partners, and especially the arts, says LaFazia. “Everyone who worked on it, worked on it for free. We were like let’s just do this thing,” she says. “Troop donated food to it. Everyone was so invested and excited.”

LaFazia stresses how great it is to work for the Troop ownership, which has put staff and guest comfort and safety first. When things first started to fall apart during the onset of coronavirus, she says they had a staff wide Zoom call to check in about how everyone was feeling. They chose to shut down completely in mid-March, then reopened with takeout later that month, and launched a beautiful new patio in early May. They served free meals (free Noods! [noodles]) to hospitality workers who were unemployed and worked together to make sure everyone was comfortable for when they reopened. “Troop is such a good example of leadership, because everyone feels really strongly about our responsibility as a restaurant right now,” LaFazia says. “I am inspired by everyone around me. The pandemic brings out the worst in people or it brings out the best in people, and I have been incredibly fortunate to keep company with people who it brought out the best in.” 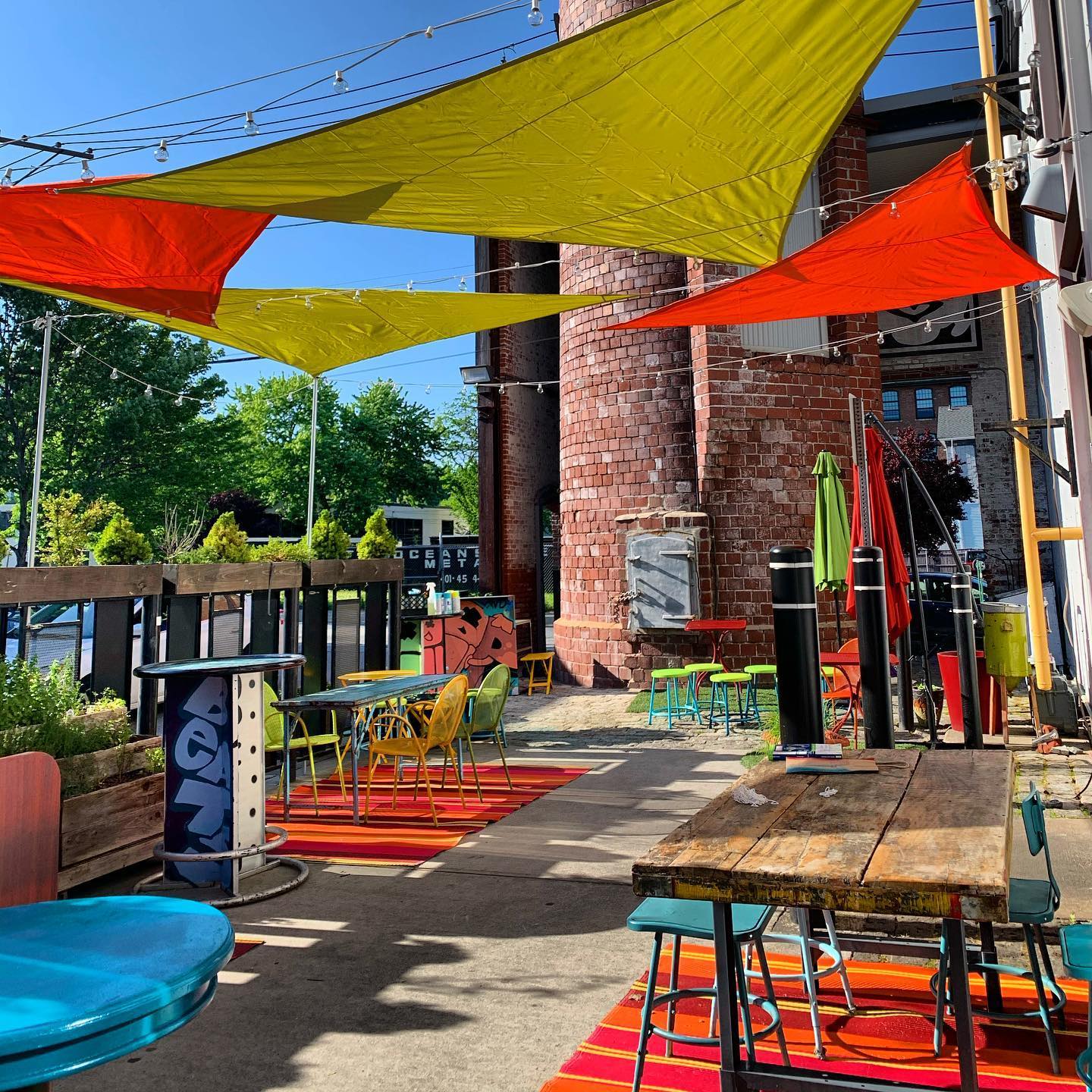 The patio at Troop. Photo from Troop’s Facebook page.

While restaurants have been able to operate safely during this time, it’s easy to forget our local theaters and performances, which have been shuttered for the summer for the most part. But these innovative outdoor performances are inspiring new hope. “The people at Wilbury and WaterFire are relentless in their desire to create a beautiful experience,” LaFazia says. “When you are working in the community with other people in your community, your projects are going to take on a lot more energy. It felt purposeful and like a cool adventure. We’re all shooting ideas around about what we can do next, and how can we take this experience and make it better.” 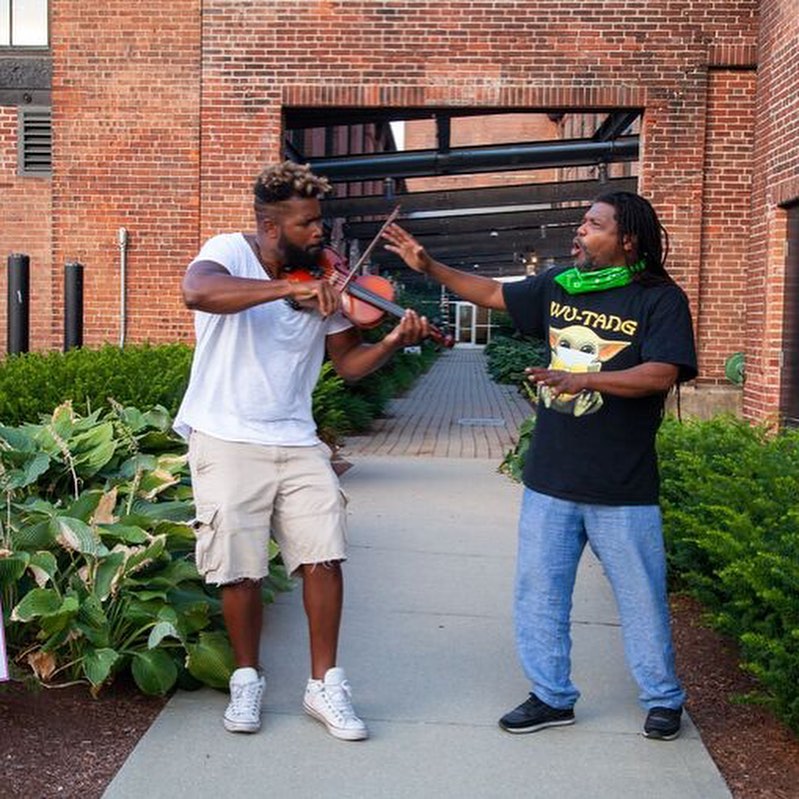 The organizations and businesses based in Olneyville have teamed up to build more community in the neighborhood, and they are all fighting for the survival of one another. “We all love WaterFire and the Wilbury, but it is easy to forget these are nonprofits. It’s easy to forget that WaterFire, which has been a huge deal in Rhode Island forever and goes off without a hitch, is completely run by volunteers,” LaFazia says. “And it’s not a cheap operation. It is not self-sustaining. We can’t forget that and we can’t lose it. The Wilbury has to survive too. WaterFire has to survive. These are things that make us uniquely Rhode Island, and very Providence.”

#StayHomeWaterFire Friday Will Pay Tribute to the Class of 2020