Order takeout from a food truck tonight, pick up local beer or spirits and go back home and tune into live-streamed music from a local band. 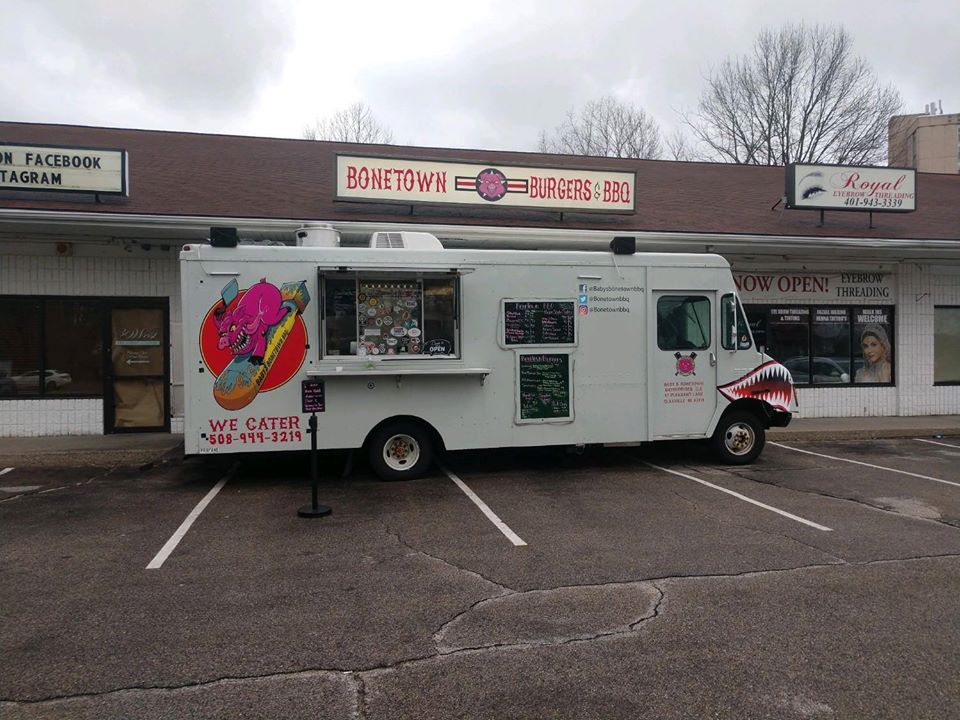 Bonetown Burgers and BBQ’s truck outside its Cranston restaurant.

Eric Weiner of FoodTrucksIn.com and PVD Food Truck Events has strategically been thinking about ways he can help local food trucks after his weekly event series at Roger Williams Park has been indefinitely postponed. The Food Truck Fridays event series was supposed to kick off a week from Friday. In its place, he’s come up with Virtual Food Truck Nights. “I hope we can hold large gatherings and events this summer, but we are not sure when,” he says. “In the meantime, these virtual events will help support food trucks and food truck fanatics.”

Weiner is conducting a soft launch tonight to see how it runs. He’s lined up five separate food trucks that have brick and mortar restaurants to serve food from their trucks tonight using pre-paid online ordering systems. The participants include Bonetown Burgers and BBQ in Cranston, Gotta Q BBQ in Cumberland, Buddha Belly in Warwick, Union Burrito in East Providence and Ocean Grove Burrito Bar in Swansea, Massachusetts. Guests need to pre-order food from their websites and pick it up in socially-distant increments once they are alerted that their order is ready. “Our plan is to start with that group because they are already open and operating. As this grows, we’ll expand it,” Weiner says.

Weiner is also suggesting that participants pick up spirits from Sons of Liberty Spirits at your local liquor store or beer from Trinity Brewhouse, which are the event’s sponsors, and bring it home to enjoy with takeout. From 6 to 8 p.m., Weiner says everyone should go to his PVD Food Truck Events Facebook page to listen to live-streamed music from a band that was scheduled to appear at food truck nights. Tonight, the band is Dudemanbro from South County, which normally plays at Sons of Liberty.

“The idea is that we will have musicians play at times that we would have had live events, and they will be streaming live from our FB page,” he says.

Each of the restaurants or food trucks that are participating are also adding meals for healthcare workers and first responders to their menus. People placing an order for pickup can make a contribution of $5 or more towards a meal for a frontline worker. During Virtual Food Truck Nights, PVD Food Trucks Events will match 10 percent of the sales from those meals for frontline workers.

How Local Food and Drink Businesses Are Getting Crafty Through Crisis