Weiner's the man behind more than seventy food truck events this season.

Food Truck nights are bringing back the good old-fashioned community get-together. Eric Weiner of FoodTrucksIn.com and PVD Food Truck Events is organizing more than seventy food truck events this warm-weather season to bring mobile fare to different corners of the state. “We were nervous about expanding to Warwick and Cranston, but when we went into those neighborhoods, we found that events pulled a high percentage of people within four or five blocks who say, ‘We love going to Food Truck Friday, but this is our neighborhood,’ ” he says.

Weiner can often be seen sporting a FoodTrucksIn.com T-shirt and live video streaming on Facebook to promote his events, beckoning social media lurkers to come on down for a meal. The former owner of a limousine company for twenty years knows what it’s like to juggle scheduling and logistics, but for his food truck events and marketing business, he’s tapping into technology skills too. 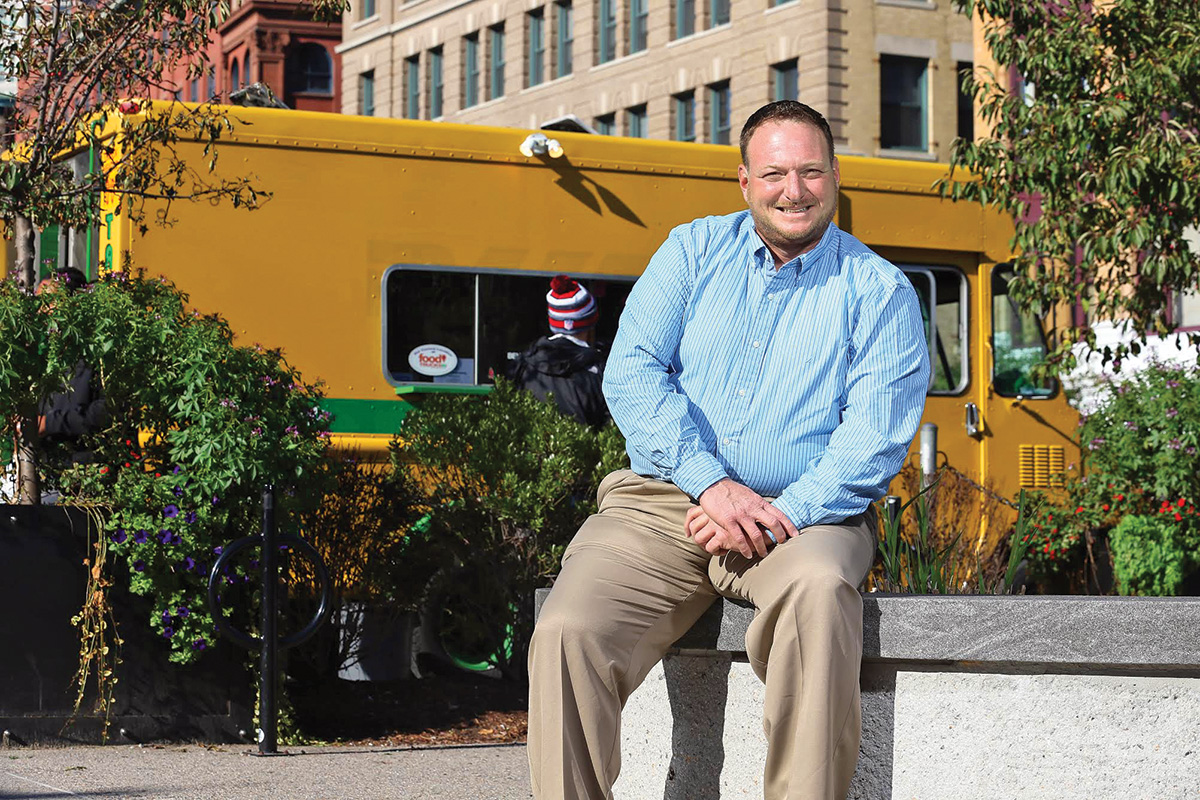 Weiner is also CEO and founder of the national website, FoodTrucksIn.com, which tracks food trucks across the country so eaters can find them at any given time. He has more than 8,000 trucks in 1,800 cities listed on his website, with more than 225 in Massachusetts and Rhode Island. The site allows trucks a free listing, plus additional paid upgraded marketing tools and technology to promote their businesses.

This year marks the fifth season of Weiner’s Food Truck Friday at Roger Williams Park, produced with Roger Williams Park Zoo, and it’s always well attended with up to twenty mobile vendors serving everything from tacos and burgers to Chinese bao and barbecue. Plus, there’s the added bonus of the carousel, train, pony rides and playground for families with kids in tow and, of course, a beer garden. Weiner will also organize more food truck nights in Providence, Warwick, two locations in Cranston, South Kingstown, Warren, Lincoln, Scituate, Pawtucket and Burrillville, plus other communities.

The food truck scene is also helping to sustain the local beer business, and vice versa, by teaming food trucks up with breweries that don’t serve food. “It’s allowing food trucks to get momentum during times when the trucks aren’t on the road,” Weiner says. “You take three or four vendors and put them in one place and now they can generate enough interest and following to help sustain the slower time of year or the slower night of the week.”

PVD Food Truck Events can also help organize trucks for private events like weddings, parties and corporate gatherings. There’s a lot of planning that goes on in the background, such as location (they need ample flat ground for trucks to park as well as parking availability for guests), restroom logistics and event layout, which is where Weiner comes in.

He doesn’t consider his work to be a job. “I started the limousine company when I was nineteen in college, so really my only objective in the world is to not have to go and get a job,” Weiner says. “I don’t mind working every day as long as I don’t have to work for someone else.” foodtrucksin.com