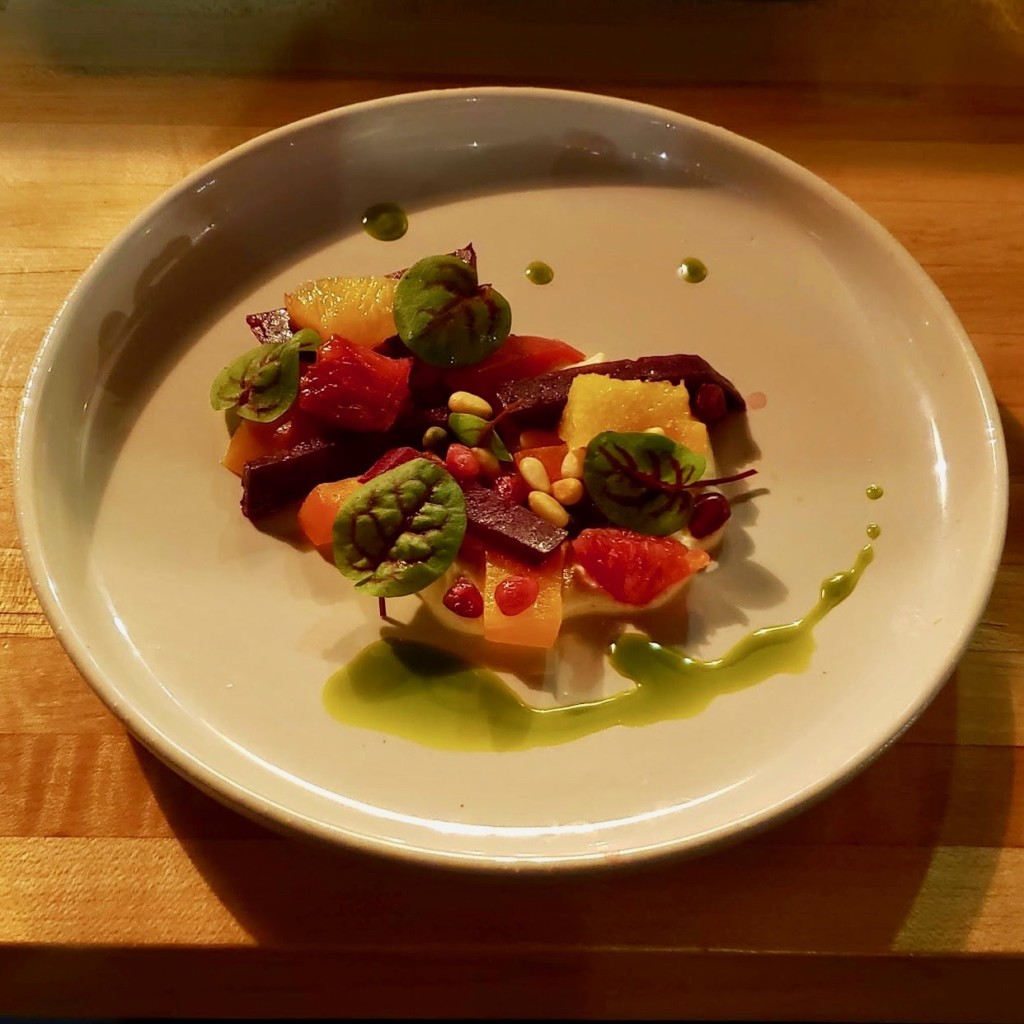 Eating your five-a-day has never been so decadent. Twelve Plants is a new plant-based pop-up restaurant concept featuring vegetables as the stars of the show in high-end multi-course meals. Bristol resident Peter Carvelli is the man behind the menus, and he is a former photojournalist and reporter, then a stay-at-home dad, who is now a practicing personal injury lawyer and pop-up chef with a passion for vegetables.

On select Monday nights, Carvelli can be found in the small open galley at Vinya Test Kitchen in downtown Providence, working alongside Michelin-star-trained chef Stefano Mariotta, whose family owns the space. They team up to plate and serve five- and seven-course plant-based tasting menus on specific Mondays, including two dinners coming up on February 10 and 11 for Valentine’s Day. When he’s not working at the law firm, Carvelli can also be hired as a private chef to bring his plant-based concept to home kitchens for romantic meals and dinner parties.

Vinya Test Kitchen, which hosts Carvelli, is a BYOB revolving restaurant space that presents different cuisine concepts on certain nights of the week. “The test kitchen is the location, the concept is the name,” says Massimiliano Mariotta, who owns Vinya with his wife, Alethia. Their twenty-five-year old son, Stefano Mariotta, is the chef de cuisine. Massimiliano has been a chef and restaurateur for more that thirty-six years, opening restaurants all over the world, including South America, followed by consulting in China over the last decade.

The Mariotta family is from Switzerland and they opened Vinya Test Kitchen five years ago. Tuesday through Saturday, son Stefano Mariotta heads up the kitchen with Rosmarin, his Swiss-inspired concept dishing out six- to twelve-course meals. He also works with his father on the high-end Italian Lagotto pop-up concept on special nights, which serves a truffle-focused menu. “We are from Switzerland, so Rosmarin also has French, German and Italian touches, but it’s using local New England ingredients,” Massimiliano Mariotta says. “Lagotto will continue until March when the truffle season is over.”

Vinya Test Kitchen has hosted more than a dozen concepts since its inception, giving chefs a chance to prove themselves without the risk. It has low overhead since it’s owned by the family, who are the only employees. “If it doesn’t work, nothing happens, no one goes bankrupt,” says Massimiliano. “We cover all the marketing for pop-up events. There’s zero risk and that’s the point. It’s not really to make money. We are happy if we don’t lose money, but the idea is to give chefs the space to do events.”

While Carvelli may not have gone to culinary school, he did earn his Professional Plant-Based Chef certification through rouxbe.com in 2019. “He’s not a trained chef, but he’s better than a trained chef. His food is good,” Massimiliano says. “He really puts all his time and energy into doing plates.” 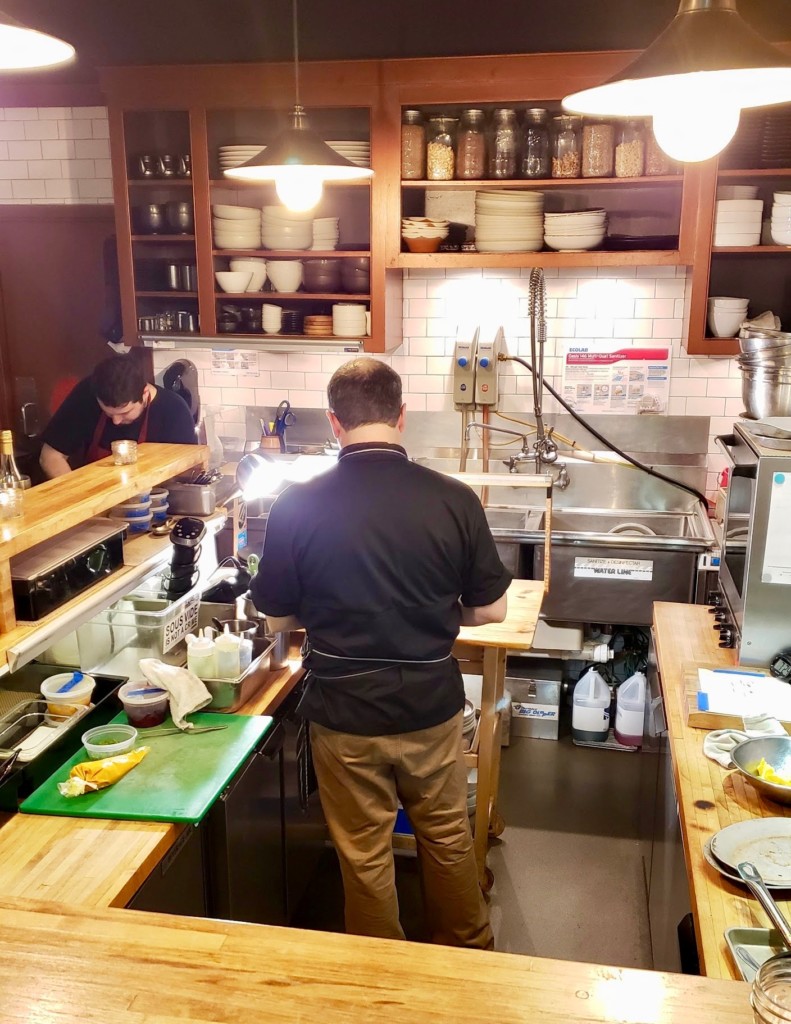 This past Monday, Carvelli served a seven-course menu of plant-based dishes, including chickpea panisse (similar to a chickpea fry) with black olive caramel; a beet salad with cashew cream and orange vinaigrette; and tortelloni en brodo which included cashew-ricotta-stuffed vegan pasta made with silken tofu instead of eggs, immersed in a rich vegetable broth made with secret ingredients that replicated the umami flavor found in bone-based broths. Then came Carvelli’s signature dish, a caramelized roasted carrot with a maple glaze and barbecue seasoning from Ocean State Pepper Co., served alongside a carrot puree and carrot top salsa verde to bring on even more of a carrot craze. The last two main courses were eggplant “al forno” topped with vegan mozzarella and pomodoro sauce, and butternut squash roast with spinach and mushroom gravy. For dessert, Carvelli supported local vegan bakery, Celebrated, by plating Becky Morris’s delicate pistachio macarons served with coconut sorbet.

The meal was wonderful in every way, and Massimiliano Mariotta is proud to have Carvelli use the space. “I try not to use the word vegan. I try to say plant-based because it’s more welcoming. He cooks for everyone, not just vegans. I am not vegan and I like it,” Massimiliano says. “Sometimes 80 percent of the guests are not vegan at all.”

Vinya Test Kitchen will be hosting Carvelli for a plant-based Valentine’s Day menu on Monday, February 10 and Tuesday, February 11. Seatings take place at 6 p.m. (Monday night is sold out) and 8:30 p.m. The seven-course menu is $89 per person. Future Twelve Plants dinners also feature a five-course menu for $66 per person. Call 401-500-5189 for reservations. Rosmarin accepts reservations Tuesday through Saturday from 5 to 10 p.m. Check @twelve.plants, @Rosmarin_pop_up , @Vinya_Test_Kitchen and @lagotto_pop_up on Instagram for upcoming events and other guest chef visits.

Reviews: The Slow Rhode and Vinya