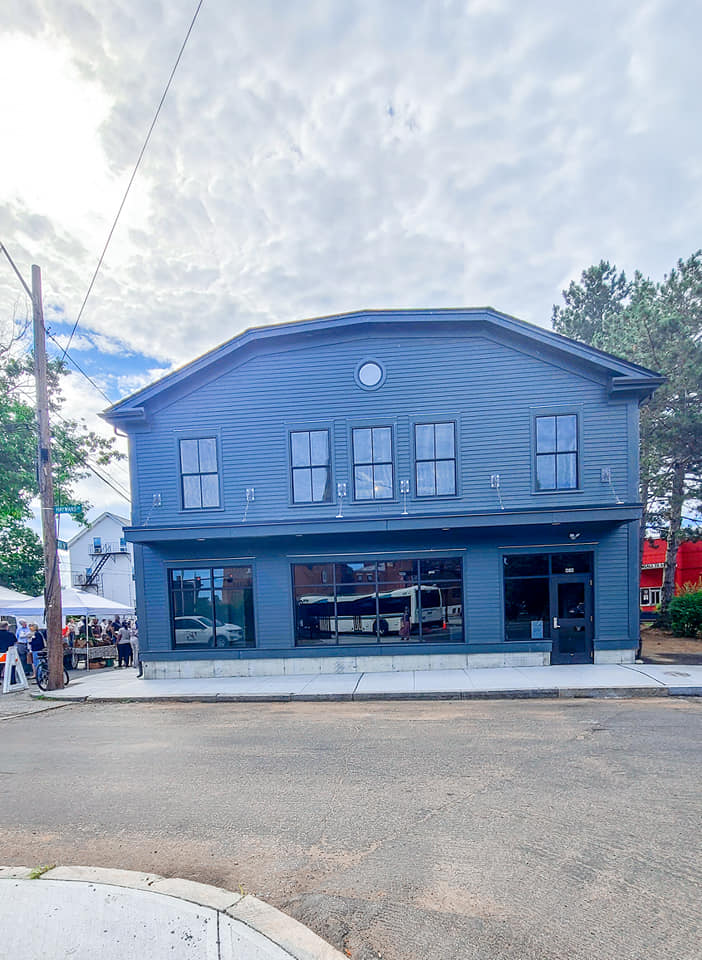 Southside Community Land Trust just got a multi-million dollar makeover. The organization unveiled its new center located at 404 Broad Street in Providence that now has expanded space for a farm-to-market produce processing center. The space will be used by more than fifty land trust farms to make healthy foods and locally grown, fresh produce more accessible to the community that surrounds the building. There is also more program and education space for SCLT’s youth program, and kitchen and retail accommodations for three Black-owned food businesses.

Many important people in Rhode Island were present at the ribbon cutting, including Senator Jack Reed, Providence Mayor Jorge Elorza and Hilary Fagan, president and COO of the Rhode Island Commerce Corporation. SCLT Executive Director Margaret DeVos applauded state and city tax credits, and all of the organizations, companies and individuals that helped to make the center come to fruition.

Senator Jack Reed explained how the SCLT center will provide for the community. “This organization is such a catalyst of change. It uplifts people, it uplifts neighborhoods, and it’s increasing access to healthy foods, which is a critical element of development. A child really can’t go to school and learn if they are hungry; people can’t get to work if they can’t eat,” he says. “The land trust is a huge contributor to this community. Because of you, we are going to have healthier, better educated and committed citizens that will continue your work.” 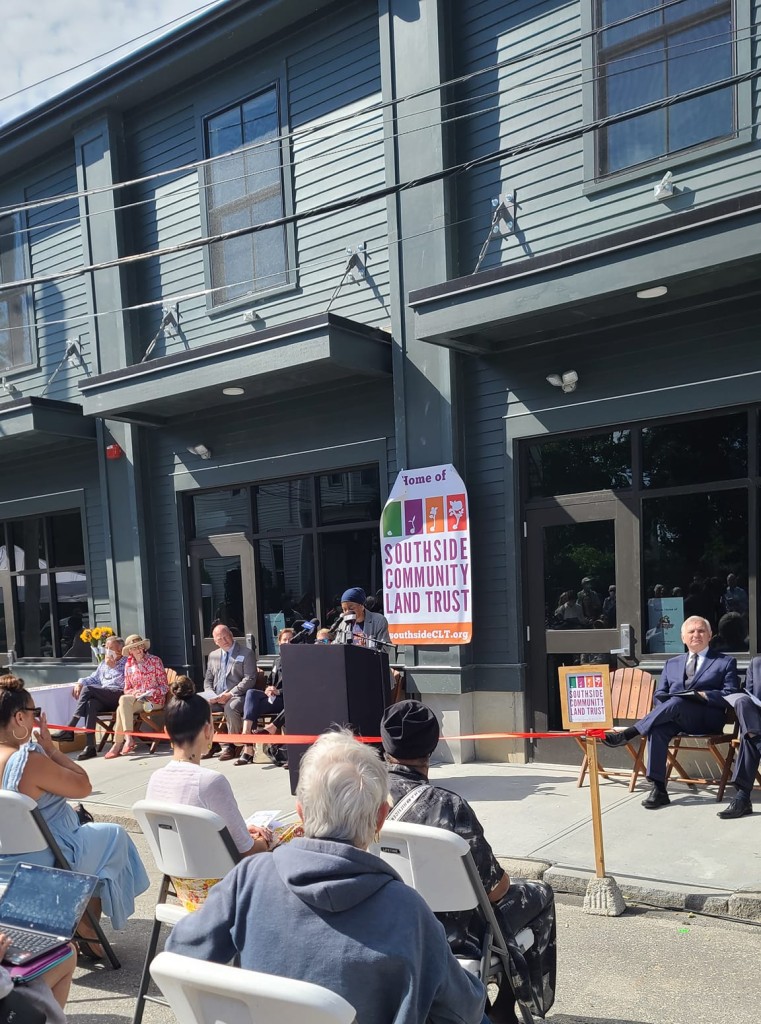 Board president Rochelle Lee speaks at the event .

A special warm welcome was made to the three Black-owned businesses that will be based there, including Adena ‘Bean” Marcelino of Black Beans PVD, a soul-food-driven ‘scratch kitchen’ serving homestyle meals and desserts; Darell Douglas of D’s Spot, known for its chicken and waffles in Pawtucket, who plans to create a menu with a healthier focus; and Luna Walker of Lu’s Mini Mart, who will operate a small African/Liberian grocery with traditional ingredients from Liberia and West Africa while also tapping into produce from Liberian and West African farmers who are growing locally in SCLT community gardens and farms.

SCLT board president Rochelle Lee recounted how the new building came to be: “Several years ago in the aftermath of a strategic planning process, our board of directors at Southside Community Land Trust heard about this property and after considering all of the challenges we would have to get past, we decided to give our executive director Margaret DeVos the go ahead to explore the potential for developing this business,” Lee says. “With little money, short on know-how and even shorter on predictions for the future, we knew it was worth giving it a try.”

Lee says she is so proud to see all of their hard work pay off. “I can not say enough about how proud and honored I am to be in this fight with you guys,” she says. “This battle is to undo the harm that we have experienced in our BIPOC communities and neighborhoods that have been fueled by food giants determined to pick and choose who can and cannot access food that is truly capable of nourishing our bodies. We all know many of us are underfed or inflicted with poor health because our choices for sustaining food are limited. We spent a decade trying to do something about that.”

At the center of that fight was SCLT’s executive director Margaret DeVos, who worked tirelessly toward these efforts. “For those who do not know Margaret as a person, she is unassuming, she’s passionate, she’s committed to protecting human rights and racism and BIPOC equity, and standing up to anybody who would deny the right to dignity and respect that every person deserves and expects,” Lee says.

DeVos took the opportunity to acknowledge each and every person, company and organization who played a role in making the new center happen, encouraging them to stand and be recognized. “Part of my job here today is to have us all know, appreciate and acknowledge each other for what we have done to make this building and this vision come into existence.” 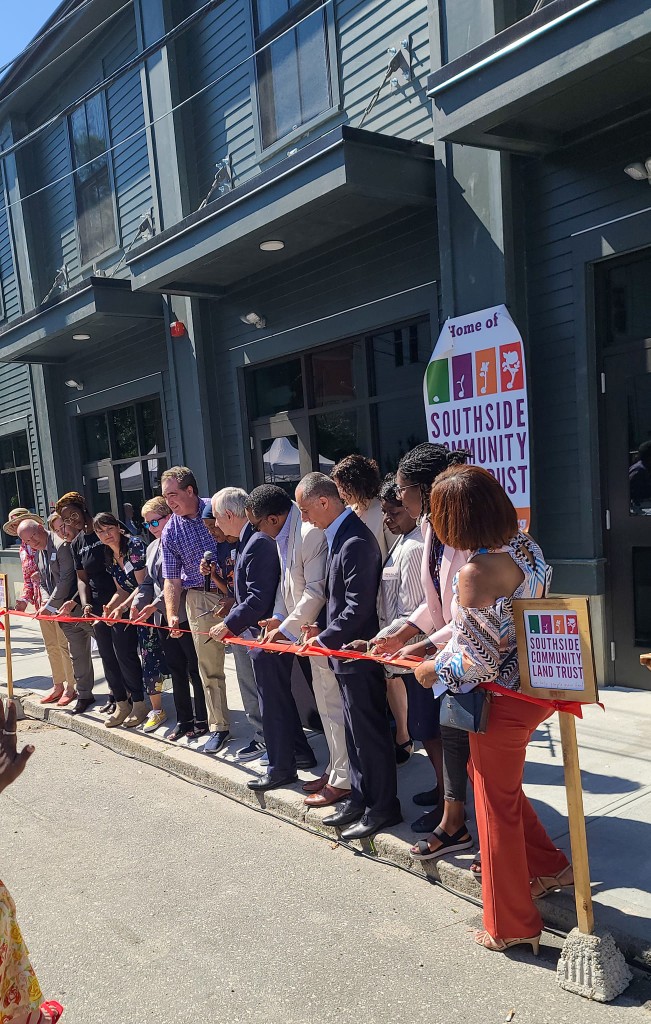 All hands on deck for the ribbon-cutting.

She explained how SCLT is moving their office space to the top of the building, where there is a demonstration kitchen and classroom space for SCLT’s youth employment program. Union Studio designed the interior and the flooring was harvested and manufactured in Ecuador by a sustainable, employee-owned coop called Whole Forest. The ground floor will house the farm-to-market center, where they will work with more than fifty farmers that lease space on SCLT-managed property. “Every single one will have the opportunity to bring crops here. We will aggregate them and get them to market right here in South Providence and Pawtucket and Central Falls, but on the tables of people in neighborhoods where food is scarce,” DeVos says. “That’s what it’s all about. That’s what we’re doing here; that’s why we put this here.”

They also have a commercial kitchen that will be available for use by the farmers, youth staff and community members, including the three food businesses. “We have many awesome supporters for this project. I want to thank you all,” she says. “What we did was big, what we’re about to do is bigger, and we need to keep that support coming.” 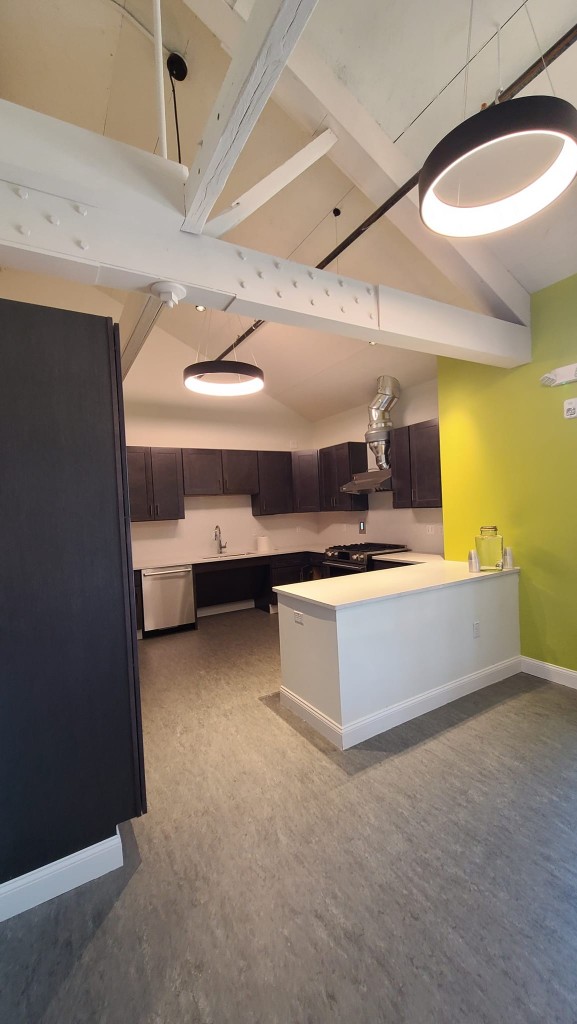 The kitchen space at the new SCLT center.