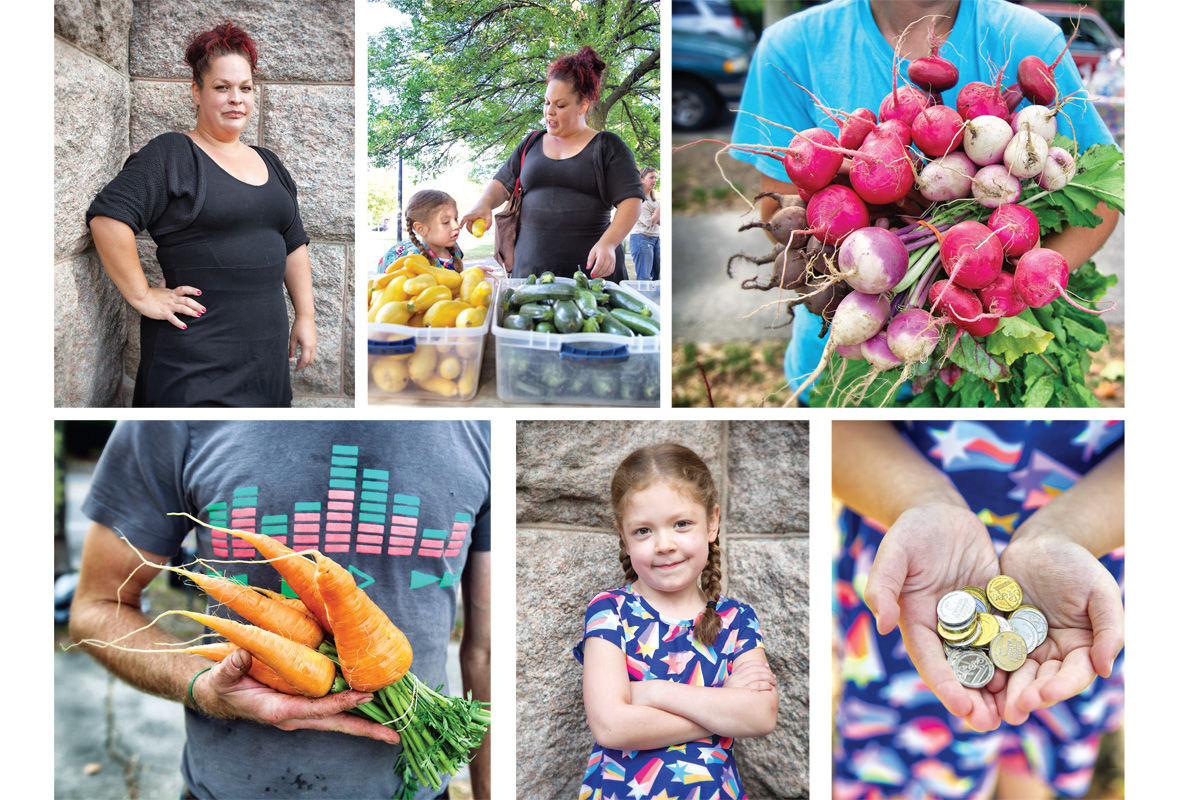 Angela Humphrey is a single mom who uses SNAP incentives at the farmers market. Her daughter, Aurora, shows off Bonus Bucks as they shop for vegetables. Photography by Mike Cevoli.

On a Thursday evening in August, Aurora Humphrey holds up a little paper cup with a small amount of blueberries and granola in it at Farm Fresh Rhode Island’s Armory farmers market on the West Side of Providence. The six-year-old tips it back into her mouth, gives a smile of approval, and then gets a sticker that says “Official Taste Tester.” She also gets to pick out a small toy for bringing back her Totally Tried It passport that proves she sampled new fruits and vegetables at home. She runs over to her mother to tell her the good news.

“I won a prize,” she says with excitement, holding up a basil planting kit that includes a plastic pot, soil and seeds. Then she changes her mind and picks up a Bananagrams game shaped like a pear, unable to decide between the two.

“They have a spelling game, but I’m not good,” she says.

“Yes you are. Look at how short those words are,” says her mother, Angela Humphrey, a thirty-seven-year-old single mother who lives within walking distance of the market. “You can spell those words.”

Aurora stands in front of the prize box, changes her mind again and holds up a stack of temporary tattoos, then picks up a heart-shaped stress ball and gives it a squeeze.

“Why don’t you pick out something you will actually use and not just dump in a box and never look at again?” says Angela, who works at home in e-commerce, but qualifies for the Supplemental Nutrition Assistance Program (SNAP), formerly known as food stamps. She makes between $800 and $900 net income per month to support herself and her daughter while also being a full-time student, working toward her MBA in nonprofit management online from American Public University. She receives $239 in SNAP benefits each month.

Angela debates the worth of each item with Aurora. “I think the plant or the game is a much better idea,” she says.

Aurora eventually chooses the basil plant and the mother and daughter make plans to help the seeds grow. “I think basil is the only herb we don’t have growing,” says Angela, who tends rosemary, oregano, thyme and dill pots at her West End apartment that she shares with her daughter and her best friend. She’s been trying to convince her landlord to make a raised bed so she can grow her own produce in the backyard, because the soil’s not remediated, but she’s had no such luck this growing season.

Aurora’s prize is just one of the incentives from Farm Fresh Rhode Island’s Healthy Foods, Healthy Families program, which provides about 400 low-income Rhode Island families with the tools to shop for and cook affordable fresh foods through activities at the farmers market. Caregivers stop by the table with children for games, free samples, financial incentives, recipes and more. Just for participating in the program and checking in at the booth, Aurora’s mother
also earns an incentive: Bonus Bucks, ten $1 tokens to spend on fresh fruits and vegetables. “They keep track of how often you stop in.”

That’s not the only nutritional incentive the single mom receives. Because she is enrolled in Healthy Foods, Healthy Families, every time Angela swipes her SNAP EBT card at the Farm Fresh RI welcome desk, she also gets a double bonus, which means she gets 80 percent extra in Bonus Bucks to spend on fresh fruits and vegetables. Last week she exchanged $20 in SNAP benefits on her card for $20 in tokens and she gained an additional $16 in tokens to spend specifically on fruits and vegetables. Other SNAP recipients get a 40 percent bonus in tokens to spend on local produce.

The Bonus Bucks program is mostly funded by a USDA Food Insecurity Nutrition Incentive (FINI) program grant. Farm Fresh RI is a sub-awardee of Wholesome Wave’s large-scale FINI grant that funds programs like Bonus Bucks at farmers markets across the nation. Independent funding also contributes to Bonus Bucks through the Fresh Food For All Fund. The nationwide initiative measures the impact of nutritional incentives, or ways to increase the purchase of produce among low-income SNAP consumers.

Fruits and vegetables cost more than chips and soda at a convenience store, but much less than treating diet-related diseases. Fresh Bucks and Bonus Bucks also invest federal SNAP dollars in the local economy, rather than at corporate grocery stores. “It’s really important because it helps enable farmers to accept more funds at farmers markets, and it gives more flexibility to shoppers to be able to access fresh, healthy foods in locations that might not necessarily have easy access,” says Thea Upham, Farm Fresh Rhode Island’s program director for community access.

The area near the Armory farmers market is described as a food desert, which means it lacks a large-scale grocery store that sells local produce. It has corner stores, fast food spots, a meat market and popup stands on Westminster Street that sell everything from fruits and vegetables out of cardboard boxes on the sidewalk, to fish and crabs from a cooler, or even someone’s trunk. The Urban Greens Co-op is coming to the area in the near future, but for now this is all they’ve got. Farmers markets provide a solution for shoppers to gain access to healthy, local foods using SNAP benefits, and many more farmers markets are coming on board to accept SNAP and credit payments with help from Farm Fresh Rhode Island.

Thirty-two local farmers markets have invested in the wireless card processing machines that process EBT and credit card transactions, and they’ve adopted the Fresh Bucks token system to go along with it. Twenty-seven markets also offer Bonus Bucks incentives. Credit and EBT shoppers get different tokens, but it’s hard to tell the difference, which avoids any stigma associated with using SNAP, says Upham.

On the first Thursday of August, Salisbury Farm, which touts the most affordable prices for produce at the Armory market, has a line that stretches into the middle of the field. Young families stand with international shoppers, including Latinos, West Africans and South Asians, all eager to buy corn, blueberries, squash and peppers. Many use the Farm Fresh RI Fresh Bucks system to pay for produce, while others wield WIC checks and some cash. Wayne Salisbury, owner of Salisbury Farm, says working with Fresh Bucks is easy and profitable for his farm, more so than WIC checks, which can sometimes be a headache. “It increases our sales and gives customers a chance to get some local and fresh vegetables,” he says. “Farm Fresh does most of the work at the table, and we can convert the tokens right into cash.”

In 2016, more than $123,000 in SNAP benefits were spent at farmers markets in Rhode Island, and more than $60,000 in Bonus Bucks were given out to match those funds spent. Rhode Island has an average of 173,669 monthly SNAP participants, and the average monthly SNAP benefits per participant is $135.64. Now imagine how much money could stay within our local economy if more SNAP recipients shopped at farmers markets. Imagine the impact on our local farms, and imagine if more corporate grocery chains stocked more produce from local farms.

The Armory market isn’t the only place that Humphrey shops for food. She doesn’t own a car, so she gets a ride from her best friend once a week to the Stop and Shop in Cranston, located one and half miles away on a busy road with multiple intersections. Shoppers without cars live by the RIPTA schedule and lug shopping bags on buses, while others choose to stick to what’s available walking distance from home. “Before the market, I used to have to go to the store more often because produce doesn’t last the whole week,” Humphrey says. “It’s nice in the warmer months to have it so close by, and right in the middle of the week.”

At the end of the farmers market season in the fall, Humphrey stocks up on produce “when it’s cheap,” and cans and pickles items to use all winter.

Back at the Healthy Foods, Healthy Families booth, children are coloring pages with the word “blueberries” on it in both Spanish and English, and they are making thank you cards to give to farmers at the market. Aurora finishes writing her note and decides to give it to a farm that doesn’t have any customers at the moment — Green Leaf Farm, which grows and sells many different types of Asian vegetables, including giant water squash, as well as eggplants, squash blossoms and more. The note says, “Thank you farmer for what I eat around the market.”

Aurora hands the note to the farmer.

“For me? Thank you!” he says with a smile, while answering questions about the Asian vegetables that she has never seen before.

Angela picks up two small eggplants and shows the Green Leaf farmer. “We are going to get these cute little eggplants today,” she says.

Angela hands over two Bonus Bucks tokens, and looks at her daughter. “One for each of us and we’ll split them and roast them. Sound good?”

Fresh Produce in a Snap
How to take advantage of Rhode Island’s programs for low-income consumers.

Food on the Move
The Rhode Island Public Health Institute has a calendar on its website that details where and when the mobile food market will take place throughout each month. Food on the Move mobile markets double the value of SNAP benefits, so for every $1 spent, consumers will get another $1 in a gift card that can be used to buy more fruits and vegetables. To subscribe to text message alerts, text the name of your town to 401-234-4510. riphi.org/food-on-the-move