These entrepreneurs are making big moves in the culinary industry and they're helping other women rise to the top, too.

Inside Ellie’s on Weybosset Street, across from Providence Performing Arts Center, a woman mans the line in the sleek open kitchen overlooking a light-filled dining room. It smells like melted butter and bread coming straight out of the oven. Maria Ritchey helms this tight, but well-designed space as a one-woman show during today’s busy lunch service in the restaurant that’s run by Ellen Slattery. Ritchey started at Slattery’s first restaurant, Gracie’s, as a server, and wanted to learn the back of the house too. While Ritchey plans to pivot careers into nutrition while studying at Johnson and Wales University, the line cook position serves as a steppingstone for her to learn how to craft healthy meals under pressure. 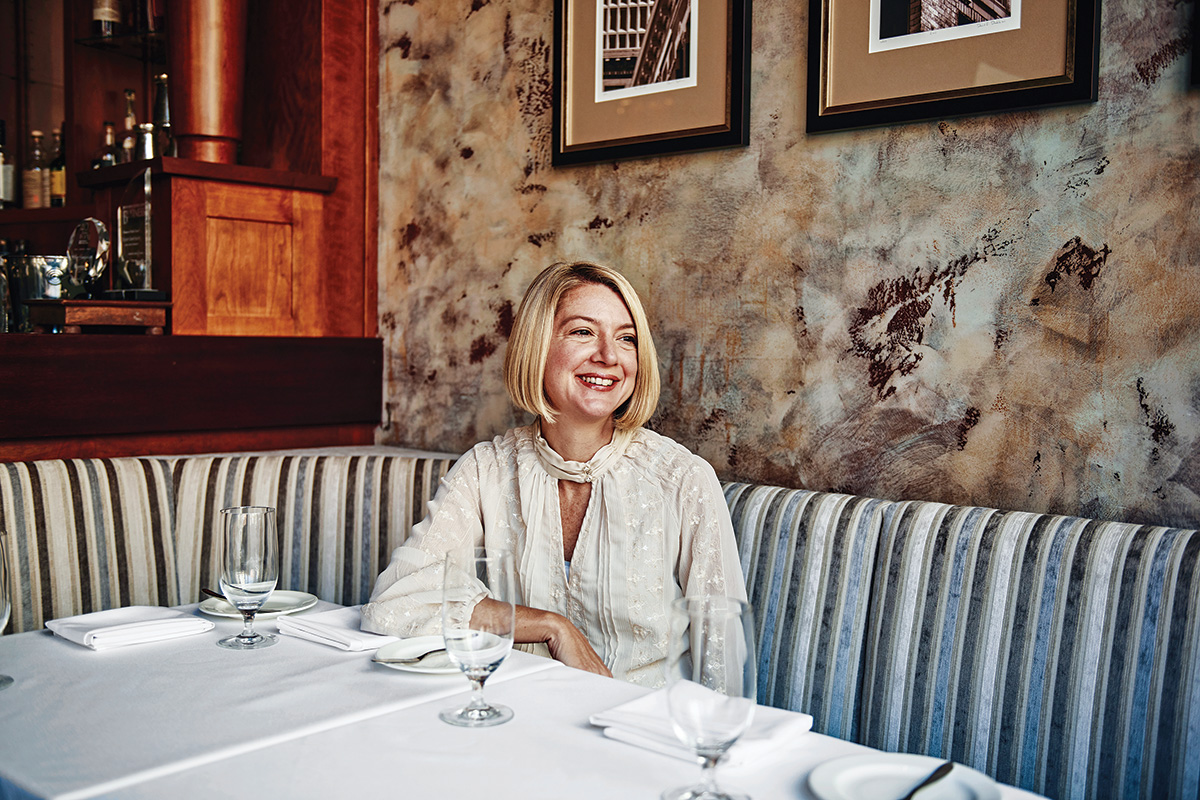 In every restaurant kitchen and behind every food business counter, more women are standing front and center as head cooks, chefs, owners and culinary entrepreneurs. In Providence alone, some of the biggest names on the culinary scene have been women: Johanne Killeen of Al Forno, Deborah Norman of Rue de L’Espoir and CAV’s late owner Sylvia Moubayed, to name a few. Today’s women culinarians continue to make a name for Rhode Island on a bigger stage, including Gracie’s and Ellie’s proprietor, Ellen Slattery, and executive pastry chef Melissa Denmark, Lia Bellini, chef of Enoteca Umberto, Jennifer Backman, executive chef of the Mooring Seafood Kitchen and Bar, Lori Kettelle of PVDonuts, Jennifer Luxmoore of Sin, and Gina Pezza, executive chef of Vanda — who all happen to be Johnson and Wales University graduates. There’s also a fleet of women food business owners including Kaitlyn Roberts of Easy Entertaining, Siobhan Chavarria of Berri, Tiffany Ting and Rebecca Brady of Hometown Poke, Milena Pagán of Rebelle Artisan Bagels, Minnie Luong of Chi Kitchen and the list goes on.

Nationally, however, women only make up about 23 percent of all chefs and head cooks in the culinary industry, according to Data USA, a platform that allows users to collect, analyze and visualize shared U.S. government data. The Bureau of Labor Statistics predicts 9.62 percent estimated job growth for chefs and head cooks by 2026; the industry is booming and there will be a lot more jobs to fill in the future.

Careers in the culinary industry are on the rise, according to Johnson and Wales University’s interim dean, Susan Marshall, who sees women pursuing career paths in food, not just in restaurants, but also in nutrition, food product research and development, food and beverage management, entrepreneurship and more.

“The food industry is really blossoming,” says Marshall. “Traditionally we used to think of culinary education as just working behind a hot line. That’s not true anymore. For some it is, because that’s where they want their career path to take them, but we also educate or prepare students for other fields.”

The data for the most recent 2019 graduating class in Johnson and Wales University’s School of Culinary Arts shows 54.1 percent men and 45.9 percent women, and that breakdown in majors includes an associate’s degree in culinary arts, and bachelor’s degrees in culinary arts; culinary arts and food service management; culinary nutrition; and restaurant, food and beverage management. However, figures for the baking and pastry arts program, which are separate from culinary arts, show a 89.5 percent female and 10.5 percent male breakdown.

Marshall says she sees just as many women as men in the classrooms and labs at JWU, and she says men and women are treated equally and learn how to work together in a culinary environment. “There are not male teams and women teams, there are teams,” she says. “They are working side by side, and regardless of the career path that these students are working towards, and regardless of gender, we are educating them simply as food professionals.”

We talked to several women restaurant and food business owners in Providence, including Ellen Slattery of Gracie’s and Ellie’s, Kaitlyn Roberts of Easy Entertaining and Milena Pagán of Rebelle Artisan Bagels and Little Sister, to learn how they got their start and how they’re paving the way for others who want to pursue the culinary industry as a career path. 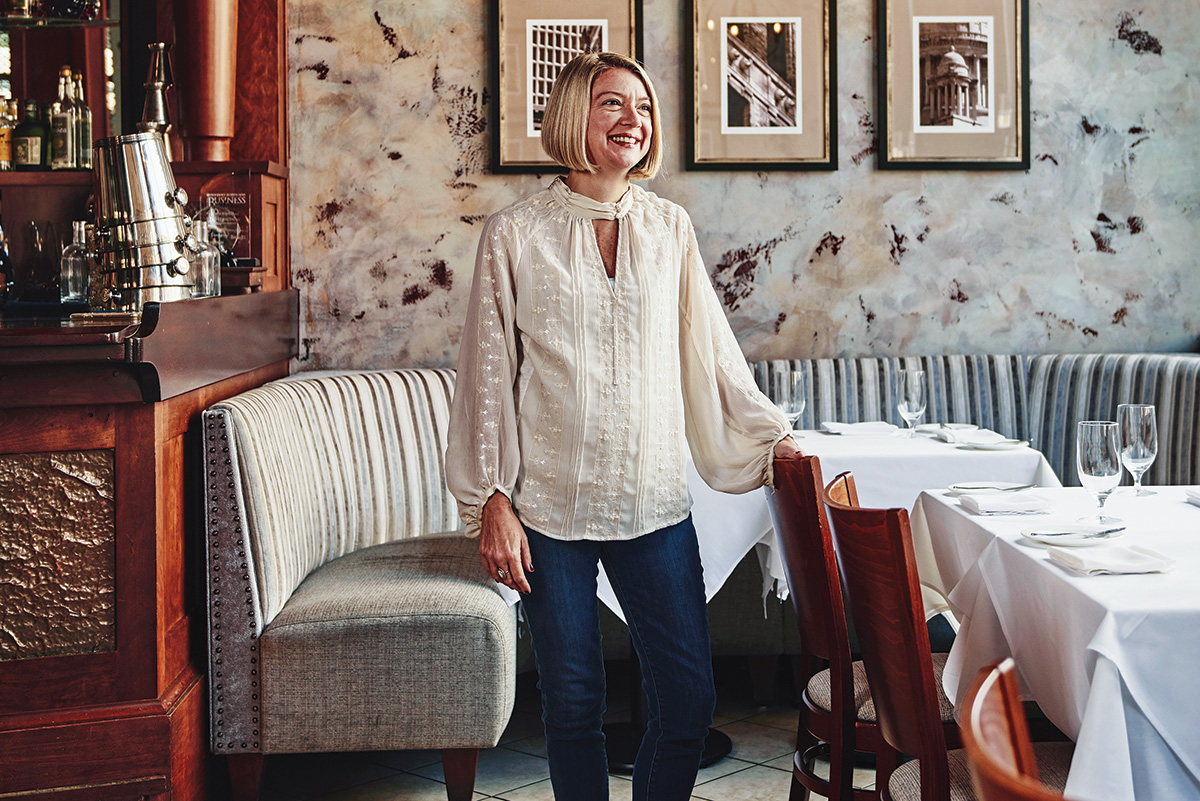 Ellen Slattery at her restaurant Gracie’s, which has been open twenty-one years. Photography by Tony Luong.

As the lunch rush starts to stream into Ellie’s in downtown Providence just before noon on a late-August Friday, a hive of activity is buzzing below their feet. Coincidentally, in walks a female farmer with fresh-picked flowers and a jar of sweet honey harvested from her own beehives at Moonrose Farm as a gift for the restaurant’s owner, Ellen Slattery, who is selling the honey at retail.

The upstairs restaurant floor at Ellie’s covers 1,500 square feet, and another 1,500-square-foot footprint exists underneath it. It is the beating heart and soul of Ellie’s: the kitchen. It is the whole reason that Slattery moved on from the tiny space that was Ellie’s Bakery by the Biltmore garage. She wanted her bakers to be able to thrive and have the resources they required to do so, which included kitchen space. Previously, they commuted to food incubator Hope and Main in Warren — another woman-led food business — to bake the entire production and had to both assemble and pack up all their equipment during each scheduled middle-of-the-night kitchen visit, which proved inconvenient.

Down in the brick-walled basement, transformed into a sparkling state-of-the art kitchen, three women complete the baking projects for which Ellie’s has become known. Cake designer and Johnson and Wales graduate, Afton Garrett, is frosting a four-layer, tiramisu-flavored sheet cake to supplement a tiered wedding cake while pastry chef Caitlyn McGuire, also a JWU grad, adds fresh whipped cream to a key lime tart. Trays of just-baked breads and croissants rest on cookie sheets on racks awaiting the trip upstairs to the pastry case. On the wall is a chart where bakers let their creativity flourish, a page shouting all the colors of a crayon box that serves as stimulation for a collection of Crayola-inspired French macarons.

“Every month, we do a different theme for flavors,” says McGuire.

“How would do you do the flavors?” says Slattery.

“I like weird ones, like Timberwolf, because then we’d have to really think about it and come up with a flavor,” says Garrett. “Everyone is feeling Razzle Dazzle Rose.”
In another part of the kitchen, two male prep cooks slice Blackbird Farm ham for sandwiches while another arranges green, leafy lovage for salads. A tray of fresh-picked tomatoes in vibrant red, orange and yellow are laid out on a cookie sheet to preserve flavors.

There are many women and men who work at Slattery’s two restaurants; in fact, Slattery says the staff is divided equally, but the baking crew is majority women. Slattery says in quarterly reviews, she likes to know up front what her team needs in order to be successful. In what can be considered a transient industry, some of her staff members have stayed with her for more than a decade, including JWU grads executive chef Matthew Varga, who’s been with her for eleven years, and executive pastry chef Melissa Denmark has been working with her for nine-and-a-half years.

“Melissa is a powerhouse, and her work ethic is unbelievable. She and I grew together because it was teaching her, and teaching myself, how to set boundaries,” says Slattery. “You work so hard that you get to a point where you burn out or you have to change your ways of operating, so for her, establishing strict boundaries of when she’s not in the building, then it’s her own time.”

Slattery knows that the staff have their own lives, and Denmark is focusing more time on cultivating Moonrose Farm with her wife, Jordan Goldsmith. She took October off, is returning for the holidays, then will work for Slattery on a consulting basis. Varga on the other hand, is a new father, and he’s been able to go back to cooking nights at Ellie’s. Slattery has also provided opportunities for Varga to fulfill his passion for travel through leading culinary cruises to Europe with guests as part of a travel series they started.

“I want to know what’s going to make them happy and successful, and what’s going to give them clarity and feel healthy,” Slattery says. It’s a far cry from the “Hell’s Kitchen” approach to leading in restaurant kitchens, which was pervasive several years ago.

When Slattery started out in the industry working for a male chef in a North End restaurant in Boston, she remembers long nights that were physically and mentally grueling. “It was a lot, working till two or three in the morning, and even though the chef took time to teach me things, he was also extremely demanding,” Slattery says. “I had never worked in that environment before, so I would leave at the end of the night and be utterly exhausted, and just cry.”

Slattery initially went to college for child psychology, and later realized that cooking was her real passion. A friend suggested she try working in a restaurant, and arranged for her to meet with the North End chef. “I had zero experience. I wasn’t even holding a knife properly,” she says. There, she learned about caring for products and handling food, and she decided that the restaurant industry was the right path for her future. She pursued culinary school at Johnson and Wales University and worked brunch at Deb Norman’s Rue de L’Espoir as an undergrad.

A few years after graduation, Slattery — then Ellen Gracyalny — and her family bought the original Gracie’s building on Federal Hill. Her parents helped her renovate the space while renting out an upstairs apartment to tenants for additional income, and she opened the restaurant two years later at age twenty-six as a homage to her maiden name. She later moved Gracie’s to its current location on Washington Street, and opened Ellie’s Bakery, named after her mother, on the same street six years ago. It evolved into the present-day Ellie’s on Weybosset Street. Gracie’s has now been open for twenty-one years.

Slattery, who is petite and polished with a stylish blond bob and impeccable manicure, has helped women succeed in a tough business. She was surprised to hear the national statistics on women working in restaurant kitchens, and ponders why fewer women pursue the career path. “It could be the physical demand, the hours, it’s working at night,” she says. “It’s not really the best for raising a family.”

Slattery knows this firsthand. She’s been through it all raising her own three children, Makayla, eighteen, and Aidan, fifteen, from her first marriage, and Molly, age four, from her second marriage. Just a year-and-a-half into opening Gracie’s, she became pregnant with Makayla, and soon was balancing new motherhood with running a restaurant. “That was super challenging. It’s just trying to make time, and at that location, we were so small that I had to be there every day from open till close, operating all facets of what we were doing,” she says. “The hardest parts were the long nights. Working a Saturday night and feeling like you have enough energy the next day to devote to your family.”

Adding a second full restaurant has been another big adjustment, but it’s one that’s made the most sense for growth. Originally, Slattery was thinking about keeping Ellie’s Bakery open in addition to running both Gracie’s and Ellie’s, but she’s adjusted her plans. “The team kept telling me along the way, ‘I feel like we’re going to be oversaturating Ellie’s,’ and it didn’t hit me until Ellie’s opened,” she says. “The reason we were doing it is because so many regulars said they wouldn’t go to the new location because it was too far away, but when we opened, we saw them coming in.”

Slattery says that sometimes the best decisions come from listening to your staff.