These entrepreneurs are making big moves in the culinary industry and they're helping other women rise to the top, too. 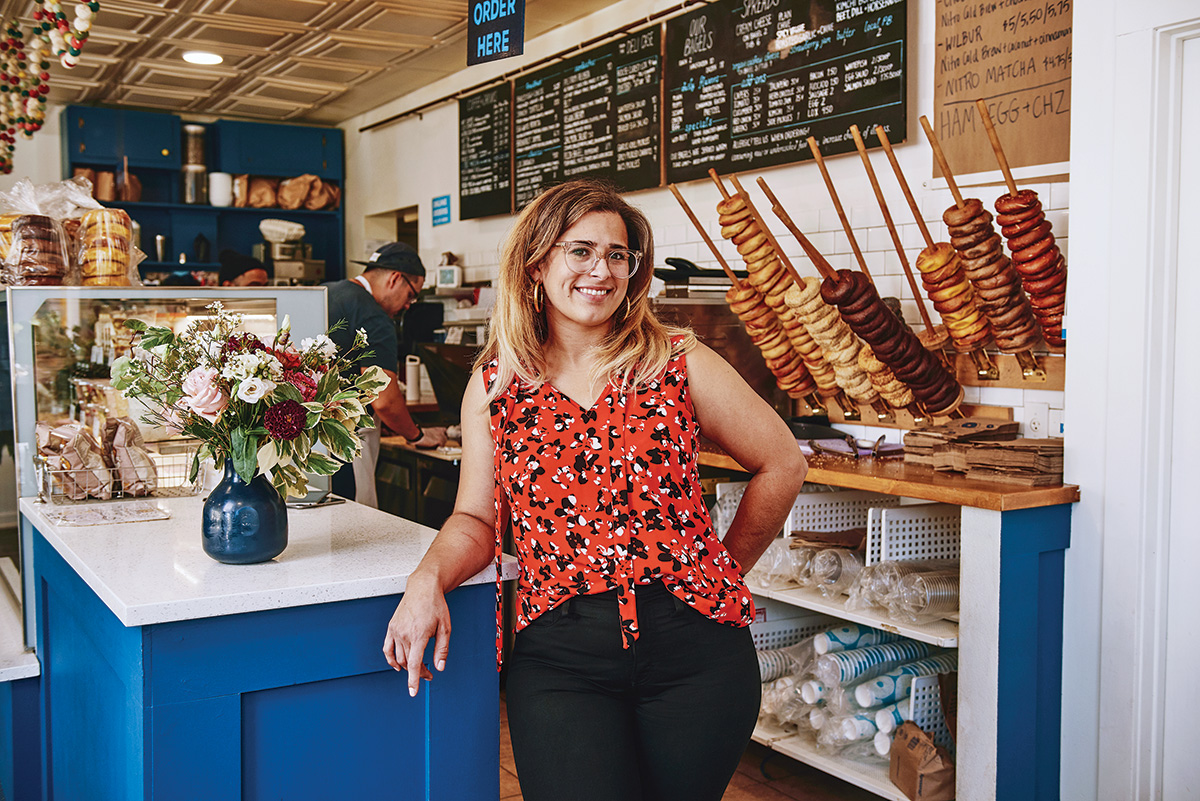 Rebelle is French for “rebel woman,” and if you get to know baker and entrepreneur Milena Pagán, then you realize it’s the perfect definition to describe her spirited, no-nonsense personality.

The twenty-nine-year-old Puerto Rico native graduated with a degree in chemical engineering from Massachusetts Institute of Technology and was working in merchandising strategy for CVS when she decided to change careers and pursue baking. She had never even worked in a restaurant, but coached herself on the science of mixing, hand rolling and proofing dough for twenty-four hours, then boiling and baking bagels through experimentation and obsessive trial and error. She started out seeing if she could make it in the bagel business by doing popups at farmers markets and sales at storefronts like Stock Culinary Goods, PVDonuts and Laughing Gorilla Catering.

“I wanted to do the popups as a way to test the market and build the confidence I needed to make the investment,” she says inside her storefront, Rebelle Artisan
Bagels on the East Side of Providence. She wears quirky transparent-rimmed glasses and her thick curly brown hair with vibrant purple streaks is tied up in a ponytail. She periodically interrupts the interview to adjust the cafe’s music, clean up a table or point a customer in the right direction near the coffee station. “So when I quit my job and said I was going to do this, I gave myself six months to decide, go or no go. We came up with a metric or criteria that we had to hit, and if we hit that, then we would feel confident going into a storefront.”

And Pagán knocked it out of the park. “I remember when I did my first popup at PVDonuts, I thought it was going to be the closest we were going to come to testing this out, because it’s on the East Side, and we made sandwiches,” she says. “I can’t remember how much money we made, but I remember walking away from it, and we hit our customers per hour, and we hit our average ticket. After that, we were like, for sure, we need to start a bricks and mortar storefront.”

Pagán is a numbers person, stemming from her MIT education, so she’s able to analyze sales predictions to estimate what her next logical move should be. She launched a Kickstarter to help raise funds for the initial storefront, and quickly got the shop up and running a few months later, promptly paying back rewards to contributors. Once in business, she found ways to increase her average ticket per guest by adding Nitro brew, soups, bagel sandwiches stacked with house-cured lox and pastrami as well as vegan options for lunch, and additional pastries like babka, pop tarts and cookies.

She was able to start turning profits and reinvest in the business by upgrading glass cases, installing bright new awnings and purchasing better equipment. Eventually, her husband was able to leave his job at Wayfair to help with the business. “Being profitable is so exciting in so many ways. It means that we get to sit down and be like, ‘What are things we should buy? What are things that would help us?’ If something breaks, we fix it,” she says. “We bought new ovens, because the old ones were about to die out.”

Then she decided to go back to school to get her MBA in business administration from MIT, which is helping her understand the legalities that come with owning a business. Although she’s put the degree on hold to open a second business — an all-day cafe and bakery called Little Sister on the East Side between Hope and Rochambeau — she plans to return. “I want to learn from world class experts: How can I make my operation more efficient? How can I make my brand really tight?” she says. “How can I think about legal implications of running a business?”

And she doesn’t keep all of that know-how to herself. Pagán’s passed on some of that business sense as a friend and mentor to Victoria Young of Vic’s Craft Ice Cream, who is a graduate of Johnson and Wales University’s baking and pastry arts program. They share financial and business contacts, one of whom is a woman who bought the building where Vic’s opened in Barrington and the building where Little Sister is located and purposely rents to women-owned businesses to help support their endeavors.

Young and Pagán teamed up to rebrand Vic’s Craft Ice Cream products and market them in new ways like doughnut-inspired flavors in partnership with Knead Doughnuts, and strawberry pop tart and junk cookie ice cream in partnership with Pagán’s own Rebelle. They installed freezers selling cups of Vic’s Craft Ice Cream at storefronts around town including Knead, Rebelle and Stock Culinary Goods.

Pagán says her goal is not to own multiple Rebelles, but she would like to expand her brand into other businesses. She’ll get the chance this winter when she opens Little Sister, which will offer breakfast sandwiches, lunch and dinner options and morning pastries inspired by her upbringing in Puerto Rico. But she knows she won’t be in the kitchen for long.

“Being a business owner, you spend most of your time not cooking,” she says. “You have to decide, do I want to be running the business, or do I just want to be working in the business? There are people who don’t have that conversation with themselves when they are starting out, and then as soon as they start dipping their toes into what it means to be a business owner, they realize they have to deal with hiring and firing, and understanding financials and talking to accountants, and doing real estate research.”

She’s currently wrapping her brain around constructing and designing the new restaurant herself, licensing regulations and permits, accounting details, paying fees and understanding confusing tangible taxes to be paid to the city of Providence for items like tables and chairs, which she says makes no sense.

It’s a good thing Pagán didn’t set out to be just a baker. “Say you are ten years into the future and your business is really successful, what do you want to be famous for? Some people want to be Christina Tosi. She’s famous for being a pastry chef. Customers want to see her in the kitchen, and enjoy her recipes,” Pagán says. “I didn’t want to be that. I want to be like Ken Oringer. I want to be a restaurateur.”

As Little Sister opens its doors in the near future, Pagán is confident there will be more siblings to come.