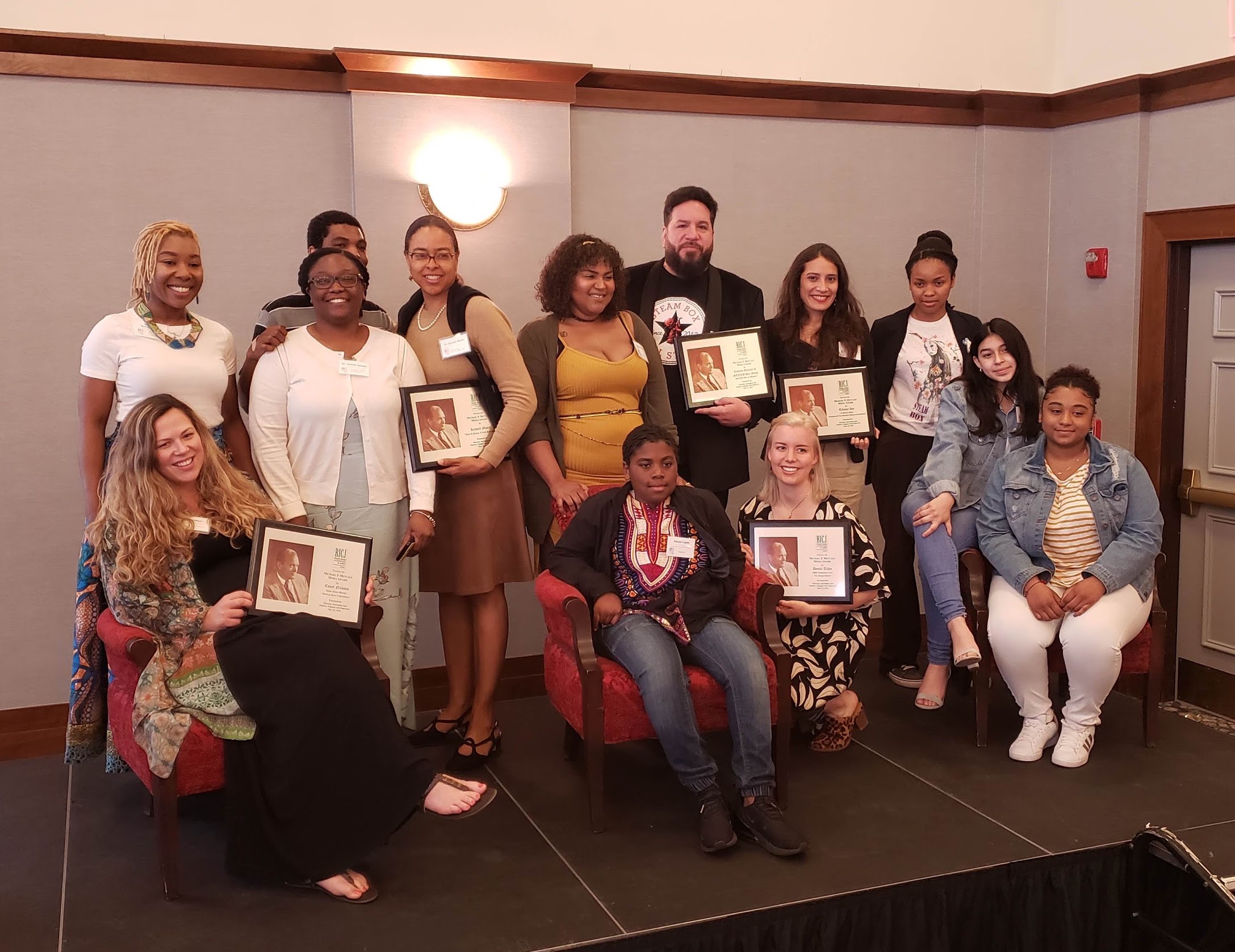 The Metcalf Award recipients and the subjects of the media, including Rhode Island Monthly‘s Casey Nilsson and Shawndell Burney-Speaks (both pictured on the left).

Yesterday, five distinguished journalists and their media organizations received Metcalf Awards for Diversity in the Media, which was organized by Rhode Island for Community and Justice. A breakfast was held at the Hotel Providence, where the people who were the subjects of the award-winning coverage in print, film and a podcast gave audience members an insider’s perspective on the stories, while also commending the journalists. Each award presentation turned into a discussion about the issues behind the stories and films, and the journalists gave insight into how they produced the media.

The Metcalf Awards were founded to honor Michael Metcalf, publisher of the Providence Journal, for his community contributions and his recognition of the media’s power to offer insights that can promote understanding. The Metcalf competition is judged by a panel of journalists, faculty and community members.

Attendees learned about the hard work and dedication it takes to report these important stories, which often take months and months of research, interviews and relationship-building. Rhode Island Monthly associate editor Casey Nilsson was one of the recipients for her story, “Seeking Peace in Providence.”

From the program: “In her article, ‘Seeking Peace in Providence,’ Casey Nilsson follows a community grappling with ways to prevent shootings in the aftermath of the gang-related murder of twenty-two-year-old Devin Burney. Nilsson captures the emotional struggle of Devin’s mother, Shawndell Burney-Speaks, as well as fellow members of the Institute for the Study and Practice of Nonviolence. Beginning with a detailed, heart-wrenching account of the crime itself, Nilsson explores the aftermath of this tragedy from the perspective of a community desperate to stop future gang-related crimes.”

One question that came up in the discussion about Nilsson’s article is why does Burney-Speaks continue to work with the community to prevent gun violence, even after she lost her own son. Here’s what she had to say:

“I have to. My son was my life. I prayed for him. I asked God for him, and I watched him return. So to know what I deal with on a day to day, to know what my daughter deals with on a day to day, whatever I can do to help avoid someone sitting in my seat or feel my shoes, this is not a club that any mother wants to be a part of. You don’t want this membership. That’s why. Kids need to be able to live. They need to be able to right their wrongs. They need to be able to grow up and understand that if they made a mistake when they were young, they need to give back and apologize and do something valuable within themselves and the community, and not just have their lives taken away because of a wrong choice of a friend or an associate. Because these people weren’t my son’s friends. I don’t care what anybody says, they weren’t his friends. Young people really need to understand the depths and the effects of your choices, when you choose to hang with certain people. If your mother says no, it’s no. That’s it. I know it’s not easy, and I know I was sixteen before – it might have been a long time ago – but I understand when my mom and dad said no to some things, they said it for my wellbeing. They didn’t say it to be evil. We have these kids making these choices and adults comforting these choices: “Why are you listening to your mom? You have your own freedom of speech. You have your own free will.” Well guess what, my son died two weeks after his twenty-second birthday for free will, so how free was the will? It’s not worth it because we never know when we’re going to leave this earth, and I will continue to fight this fight. I will continue to keep his memory alive. He was an amazing human being. He lit up any room that he walked into. He was annoying. He was funny. He was loving. And I miss him. We miss him.”

Here are the other 2019 Honorees

Rhode Island for Community and Justice

Visit the Metcalf Media Awards page to learn more about these outstanding journalists.