Who's the guy on the State House? Why doesn't Del's come with a straw? Why are we so Catholic? We tracked down answers to all of your burning questions.

Why do the Democrats have a stranglehold on the General Assembly? 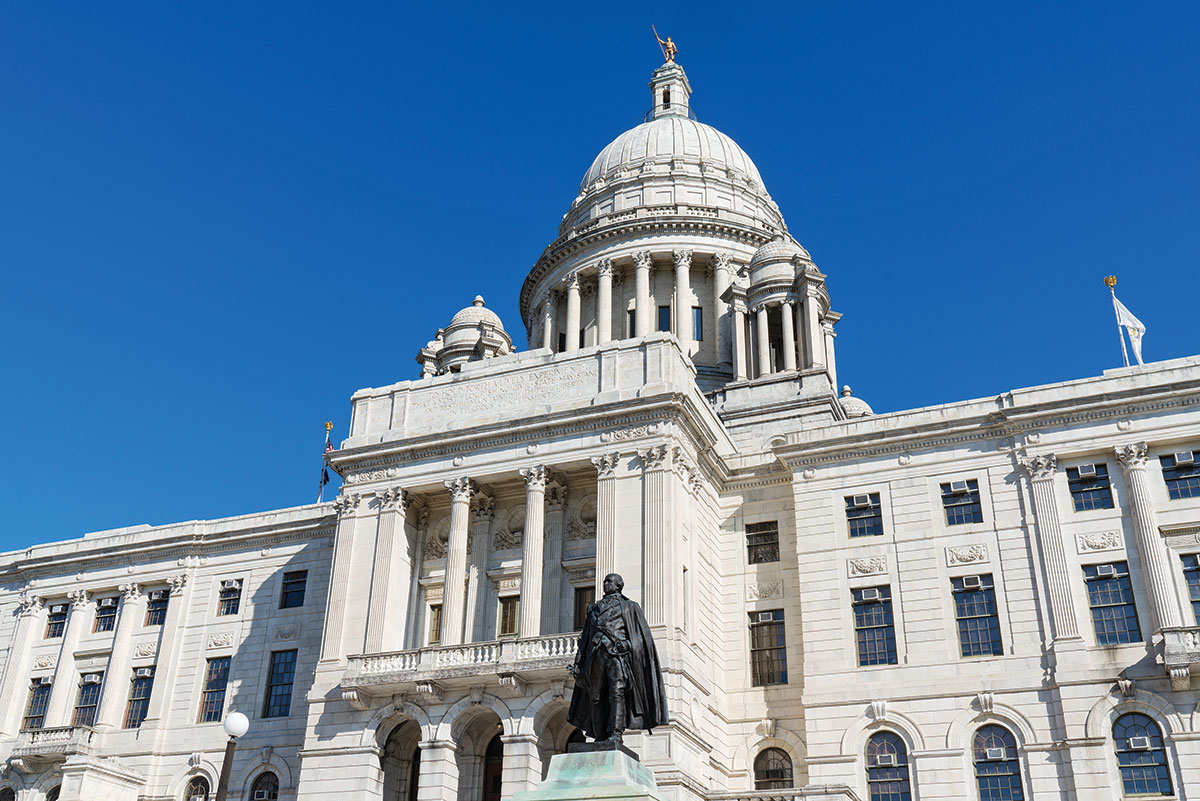 In the last election, the Republicans’ tiny minority in the House of Representatives shrank by another 18 percent, from eleven members to nine. The GOP’s five senators fit comfortably in a phone booth. Why is it easier to be struck by lightning than to be elected as a Republican to the Rhode Island General Assembly?

Political historians trace it back to the bloodless coup of 1935. Governor Theodore Francis Green, a patrician by class, but a populist at heart, engineered an audacious takeover. The Republicans had dominated state politics since the 1850s, under the command of party leader General Charles R. Brayton. Dubbed the “Blind Boss of Rhode Island” by the New York Times, Brayton cemented the Republicans’ hold on power by passing legislation that shifted most of the governor’s powers to the Senate, where voter suppression laws maintained a Republican majority. After the 1934 election, the Democrats were two Senate seats short of a trifecta. In a planned insurrection, they declared invalid Republican victories in two close races and certified their Democratic opponents. With the chambers ringed by state police, the new Democratic majority vacated the Supreme Court and re-organized the government. It was all over in fourteen minutes.

The Public’s Radio political commentator Scott MacKay says the Democrats, formerly associated exclusively with the Irish, kept their grip by distributing the spoils of power — jobs and appointments — among the various immigrant groups, French Canadian, Italian, Portuguese, who now made up the state’s working class. The landmark 1962 Supreme Court decision in Baker v. Carr, which required state legislatures to re-apportion districts under the “one man, one vote” standard “was a huge windfall for the Democrats,” MacKay says. “The decision threw out the system of one representative for each town, and gave more power to the urban working classes who were now firmly in the Democrats’ orbit.”

The rise of the unions was another factor, he says: “The unions were very strong. Up to the 1950s, a third of the state was unionized and that became another fulcrum for the Democratic party.”

Today, the Republicans are stymied by their thin ranks and by the lack of sharp ideological differences with their colleagues on the other side of the aisle, says University of Rhode Island political scientist Maureen Moakley.

“Rhode Island is not bluer than blue,” she says. For all of the strength of the Progressive wing of the Democratic Party, “the voters in this state tend to be somewhat middle of the road and that’s reflected in government policies. In some cases, it doesn’t give Republicans a place to distinguish themselves.” The GOP has also been beset by in-fighting that seems to hinder their efforts to field General Assembly candidates, she says. “The Republicans have put all their efforts into candidates for the top state offices and don’t put much effort into recruiting in areas where it is possible to recruit good candidates.”

The Republicans held political power in their iron grip for eighty-four years before Green swooped in. The Democrats have held the reins for eighty-five. Time for the pendulum to swing back?

Why are we so Catholic? 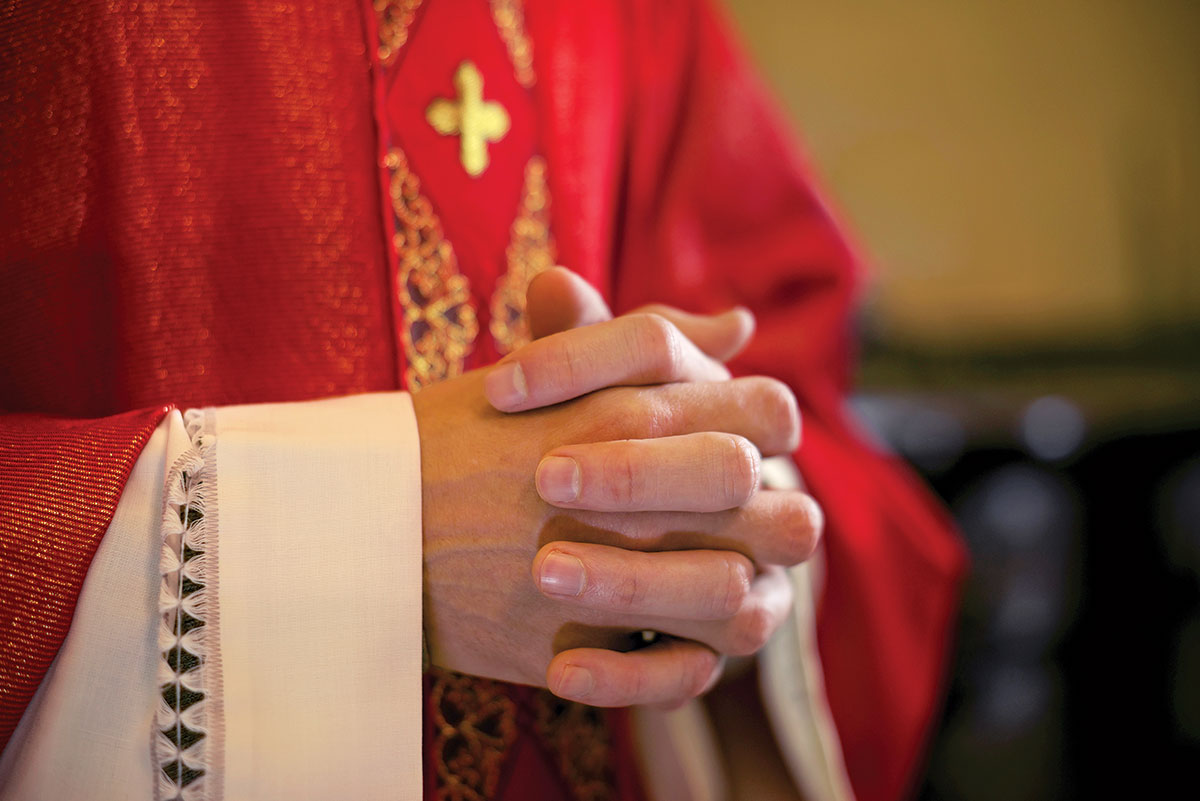 Is the Pope Catholic? Of course, according to the timeworn punchline; somewhat less obvious is the fact that the typical Rhode Islander is, too. It’s been that way since Rhode Island became the first majority Catholic state in the United States around the turn of the twentieth century, and even today, 44 percent of Rhode Islanders identify as Catholic — far more than any other religious tradition.

Catholics got a relatively late start in Rhode Island: the first Roman Catholic church wasn’t built here until 1829, more than 200 years after Roger Williams settled in Providence, and a half century after Touro Synagogue was built in Newport.

In 1828, it was estimated that there were fewer than 1,000 Catholics in the state, but those numbers soon exploded as wave after wave of immigrants from Catholic countries began arriving in the United States in the nineteenth century.

First came the Irish, fleeing economic upheavals and troubles of their homeland, many welcomed by Rhode Island textile manufacturers for their expertise in textile production, according to a history of the Diocese of Providence written by Father Robert Hayman, former pastor of St. Sebastian Church in Providence and a history teacher at Providence College.

“Rhode Island became one of the most heavily industrialized states in the country,” says Hayman. “There was an abundance of work in the textile industry and…also an abundance of housing.

Finally, the Catholic Church was very aggressive in seeking to meet the spiritual needs of the immigrants.”

Churches addressed parishioners’ temporal needs, too, says Evelyn Sterne, director of graduate history studies at the University of Rhode Island. At a time when anti-Catholic and anti-immigrant sentiment was strong in the state, churches served as vital community centers, social services providers and training grounds for political activism.

The Industrial Revolution next drew French Canadian laborers to the northern and western parts of the state, where they clung fiercely to their cultural traditions, including their Catholic faith. By the time Bishop Thomas F. Hendricken was named the first bishop of Providence in 1872, the state was home to tens of thousands of French Canadian immigrants.

By the early twentieth century, almost as many Italian Catholics as Quebecois had immigrated to Rhode Island, and strong Polish and Portuguese Catholic communities also settled in the state before a crackdown on immigration took place in the 1920s.

Unlike other states, Rhode Island didn’t have a large enough population of rural, predominantly Protestant residents to offset the growing Catholic population. Instead, anti-immigrant laws were passed restricting voting rights to property owners, which continued to blunt the political influence of Rhode Island Catholics into the 1960s — around the same time the Kennedy political dynasty in neighboring Massachusetts was sending the first Catholic president to the White House.

Nevertheless, Catholic institutions continue to play an outsized role in public life in Rhode Island — Providence College, Salve Regina University, LaSalle Academy and Mount St. Charles Academy, to name a few. In recent decades, church membership has waned in Rhode Island as it has elsewhere in the United States, but more recent immigrants from Latin American countries have helped maintain the state’s strong affiliation with the Catholic Church.

“The church continues to serve in the role as community center for a lot of people, and that’s especially critical for new immigrants,” says Sterne. Priest sex scandals have taken a toll on the church’s reputation, but “I think it’s still venerated and possessed of outsized influence, especially on issues like abortion,” she adds. “It’s still important for politicians to be seen at church. For networking and respectability, there’s still a value in being part of the Rhode Island Catholic network.”

Who’s the guy on top of the State House? 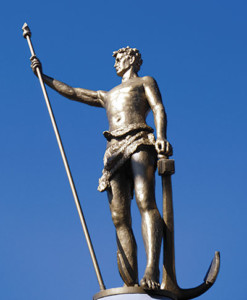 A nobody, that’s who. When architects McKim, Mead and White were drawing up plans for Rhode Island’s sixth State House — a Neoclassical marvel completed in 1904 — they first sketched its marble dome with a woman in Grecian garb posing with an anchor; she symbolized the state’s motto of “Hope.” The State House commission, however, wanted Roger Williams. But McKim, Mead and White wouldn’t have it: A shlubby fellow in Colonial pantaloons atop their grand white masterwork? Nope. So the commission met the architects in the middle. It’d be a random guy cast in bronze and dipped in gold, and they’d call him the Independent Man. (A lesson for the ages, branding is important.) A reporter in the October 10, 1899, edition of the Providence Journal had a saucier thought: “Just think of Roger without any clothes on,” he wrote, “waving a spear and anchor!” – Casey Nilsson

Why do we call Washington County “South County”? 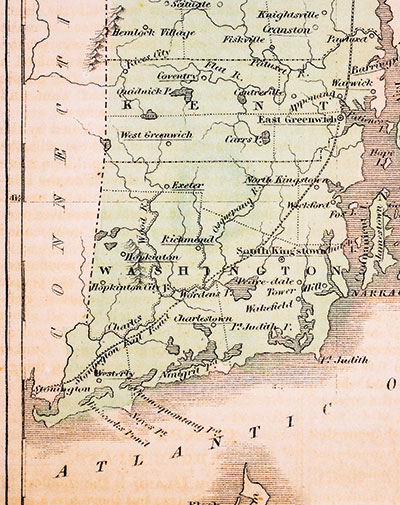 A little more than a million people call Rhode Island home. However, long before hundreds of families took up residency in the state, Rhody’s borders with Connecticut and Massachusetts were fluid and often changed. Plus, many of the early founders who moved here and established territories began to name places after their previous homes, resulting in villages like Wyoming and Moscow.

And while “South County” has been considered the southernmost county of Rhode Island for quite some time, this popular nickname for Washington County (its formal name) is just that: a nickname. According to the South County History Center, perhaps the earliest written usage of this nickname was from the 1767 written testimony of Levi Whipple. However, South County’s boundaries remain elusive. As noted by writer Betty Cotter in the book Simply South County, many natives believe it is not a place as much as it is a state of mind. So, there you have it folks. You can make anything whatever you want it to be. – Samantha Labrecque 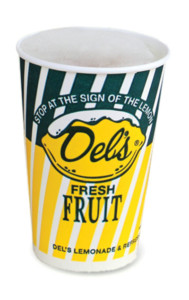 Nevermind the war on straws. Real Rhode Islanders know you don’t use a straw with a Del’s. But take it from a pro: “Hug the cup of Del’s with the palm of your hand and squeeze it as you drink it so the product enters your mouth. The warmth from the palm is transferred into the product so it melts slowly,” says Dr. Demetrios Kazantzis, vice president of research and development at Del’s Lemonade. Not using a straw is environmentally friendly and it kills some cost. “The disadvantage of using the straw is that you take in the liquid and ice that can go through the straw, but in the end, what you have left is ice alone.” – Jamie Coelho