A stay-at-home advisory is ordering Rhode Island restaurants to close by 10 p.m. on weeknights and 10:30 p.m. on weekends. 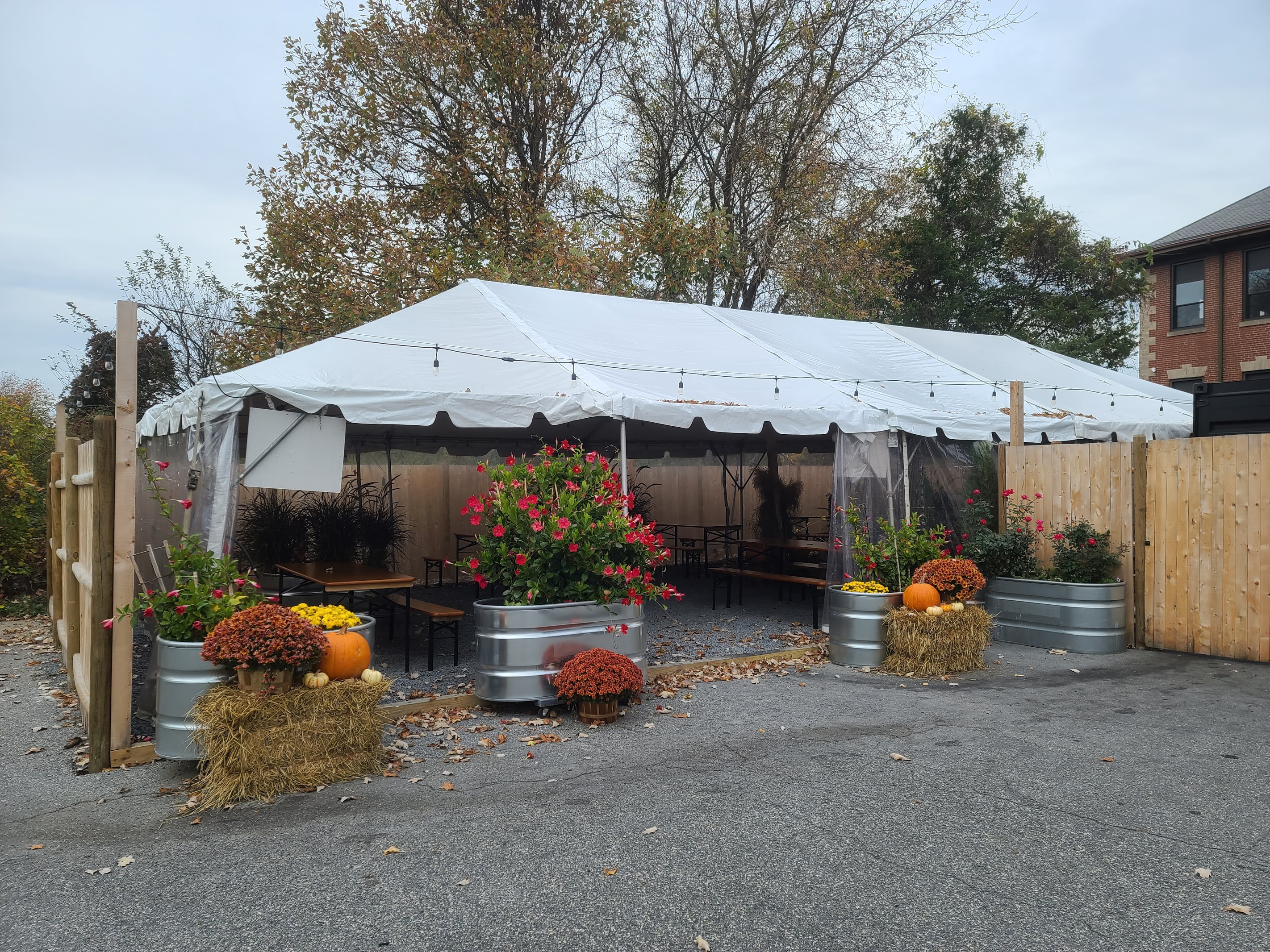 The tented patio area at Chomp Kitchen and Drinks in Warren is one of the many adaptations made by owner Sam Glynn to help keep dining outside through the colder-weather months.

Guests who want to support local restaurants will now have fewer hours to do so in Rhode Island. A statewide stay-at-home advisory declared by Governor Gina Raimondo yesterday is ordering Rhode Island restaurants and bars to close by 10 p.m. on weeknights and 10:30 p.m. on weekends. The new rules will go into effect on Sunday, and you’ll probably get a text message alert about it. Restaurants can continue to serve takeout or operate a drive-through after that time.

COVID-19 case numbers are escalating in the Ocean State (in fact, we had our highest numbers yet just yesterday) and this measure is just one of seven additional restrictions set to try to curb the further increase in cases. The Rhode Island Hospitality Association had been in close communication with Governor Raimondo before the additional restrictions were announced.

A statement from RIHA reads: “Last week, we were notified that the Governor was planning on implementing a 9:30 p.m. closing time for restaurants similar to what Connecticut and Massachusetts have recently mandated. As a direct result of RIHA’s advocacy, we were able to gain several concessions from the Governor’s office to limit the impact on our industry. Specifically, restaurants are allowed to remain open for on-premise dining until 10 p.m. Monday – Thursday and until 10:30 p.m. Friday – Sunday. In addition, restaurants are allowed to remain open for takeout and delivery. The additional restrictions are difficult for restaurants already struggling, but we are thankful that Governor Raimondo and Commerce RI listened to RIHA to minimize the impact as much as possible.”

While some restaurants in Rhode Island already close by 10:30 p.m. for normal operating hours, many restaurant and bar owners and supporters are not happy about the changes that will be implemented, in addition to the already existing strict guidelines.

Sam Glynn owns Chomp Kitchen and Drinks locations in both Warren and Providence. A beautiful tent recently went up at the Warren location using temporary grant money through the town of Warren to enable its use for outdoor dining through December. They decorated it with pumpkins, mums and hay bales to improve its curb appeal, but now they won’t be able to use it past 10 p.m.

“We were disappointed to hear that there were restaurant restrictions imposed again when there hasn’t been much data to suggest that the increase in cases is coming from restaurants,” says Glynn. “It’s starting to feel as though the restaurant industry is bearing the brunt of a lot of the responsibility of the community for things that don’t necessarily come back to us.” Glynn reports that Chomp hasn’t had any Covid-19 cases at either of his restaurants. “The restrictions that have been imposed since March are very tough to deal with, but we’ve figured out how to work within those confines, and to tune in and listen to realize we have to completely shift our business strategy at a moment’s notice again is becoming a psychological and financial drain.”

Ed Brady and Jeff Quinlan, who co-own Dig In Dining Restaurant Group, feel the same. Their restaurants include the Thirsty Beaver locations in Cranston, Smithfield and Foxboro, Massachusetts, and Huck’s Filling Station in East Greenwich. Yesterday, they sent out a press release explaining their frustration along with other restaurant owners’ angst: “Despite significant advanced efforts by dedicated industry representatives, today we dejectedly learned that restaurants in Rhode Island must adhere to a newly imposed closing time. Sadly, our beloved industry continues to be singled out, Covid-shamed, stigmatized, and penalized…” they wrote in the release. “We have bent over backwards to comply with ongoing operating regulations, not only in terms of costs incurred but also in actual hurdles being leaped over day-in and day-out in regards to human process and practice. The wear and tear endured by our valued staff is immeasurable. We’ve turned our parking lots into outdoor blockades, we’ve set up our bar areas with impenetrable plexiglass, we’ve closed our bar areas early, we’ve plastered our walls with signage about mask wearing and distancing requirements, we even have sanitizer for our sanitizer. We’re battered and bruised, and left wondering why we are now going to absorb another baseless restriction which will amount to a 20%+ reduction in hours of operation for us per your latest unilateral Executive Order signed today.”

Governor Raimondo also sent out a press release explaining the reasoning behind additional restrictions as well as measures to balance the loss in profits for restaurants. “I know this is hard to hear for businesses – and particularly restaurants and bars. While it’s my hope that doing this now will prevent us from needing to shut you down entirely in a few weeks, it’s still tough,” Governor Raimondo writes. “You’re doing everything you can, but the fact is that anywhere that people are gathering and taking off masks, the virus is spreading, and that’s unavoidable when there’s food and drinks. Today, as we announce these new measures, I am also announcing that we will be sending grants to all active Rhode Island restaurant and bars impacted by this early closure order.”

Restaurants and bars can receive between $2,000 and $10,000 based upon the business they normally do during those mandated closure times. “These businesses will need to attest that they were affected by this early closure, and then they can expect their grant from the Division of Taxation within thirty days,” she writes. “We know these grants might not make up for what has been an extraordinarily difficult time, but we hope it will help as we make another round of temporary sacrifices to stop the second wave.”

Glynn doesn’t accept this as a quick fix, as the loss will be much greater than any of these grants can provide.”The restaurant industry is going through the worst period  in the history of restaurants, so we shouldn’t have to make a case, especially when there is money available,” Glynn says. “I’ve spent a lot of money to survive. We have thirty-five people on payroll between both restaurants and that’s what’s at stake that no one is talking about: All the jobs that might be cut for places that are open later. That final push, that final turn on a Friday or Saturday night is huge. A lot of times that’s where any of the profit will come from.”