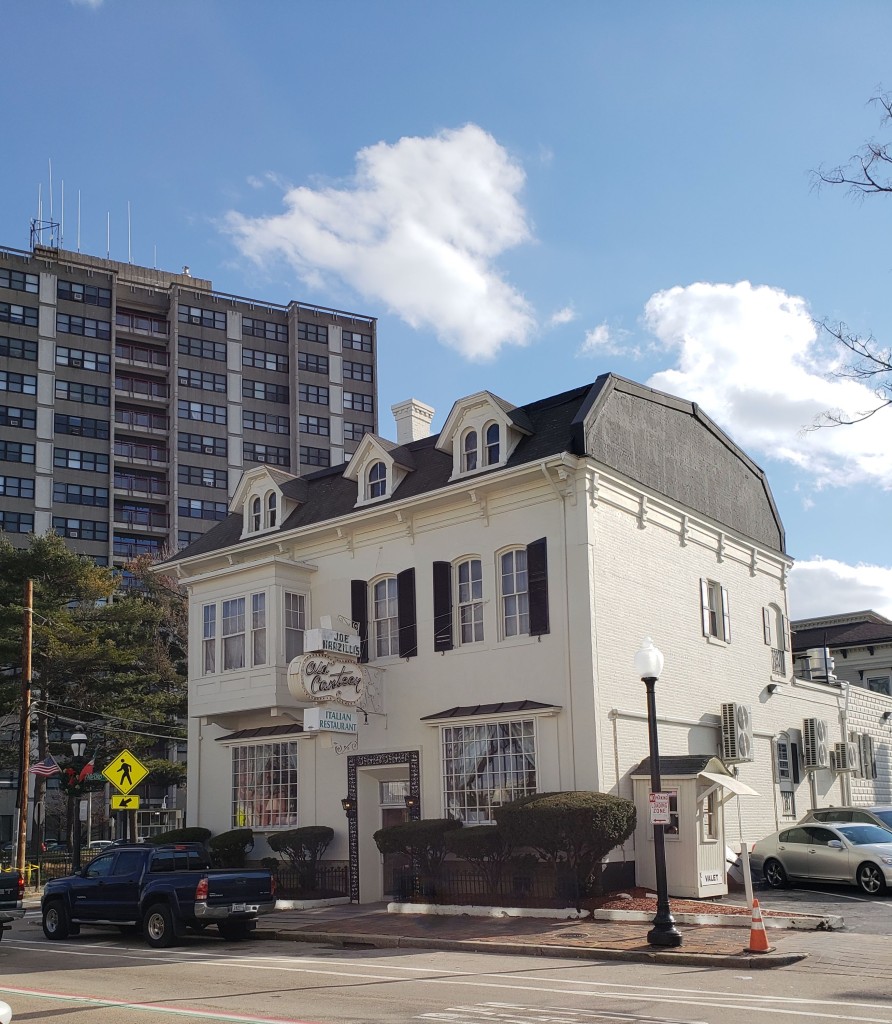 Having grown up Italian American in Rhode Island, learning that the Old Canteen is up for sale was like being told a beloved family member was on his death bed. After living overseas for thirty-five years, I do not consider myself truly home until I find comfort in a meal at our family’s favorite haunt. I have so many memories of feasting at Joe Marzilli’s temple to gorging. Where will we go now to celebrate landmark events or just eat the food we love?

Even if you are not of Italian ancestry, the Old Canteen is an icon of Federal Hill. The late Mr. Marzilli, alongside his friendly rival Camille at her Roman Garden next door, has been the subject of many a spirited debate as to who served the best food. Today’s partisan politics cannot hold a dinner table candle to the divide between devotees of these venerated restaurants. But for my family, even as my father grew up knowing Camille, there is no doubt: We belong to the Old Canteen camp.

So, what is it that made us acolytes eager to bring in-laws and new generations into the cult? Well, it started with the Marzilli handshake. That bear-like grip smothering yours, as he leaned over his front desk perch, reassured you were literally in safe hands. His gravelly voice reached into a deep memory bank, always recalling your name. That was his genius — setting the tone to let you know you were family even before you were shown to your table. But you knew you would not be sitting by the two front bay windows. These seats were the holy of holies, reserved for the politicians of the day or former Providence Mayor Buddy Cianci. No one objected. It was part of the ritual hierarchy, breaking bread among the famous as you spied a glance. The Old Canteen felt like Rhode Island’s version of New York’s Sardi’s — a place to see and be seen.

Never was this truer than at lunchtime when men dominated the dining room seemingly at odds with the pink interior. “Deals” were done over “pasta fazool and veal spitzatt’’ all sealed with a Spumanti toast followed by the requisite fried “wandis.” Who knew, or cared, this code for comfort food butchered old country pronunciation? Spirits were already high after a dry martini or Manhattan in the hidden sanctuary behind the dining room. My father took an occasional solitary meal on a bar stool, catching up with the bartender or reading the ProJo. It was his safe place to sneak in a huge veal chop and be spared from a certain female’s reprimanding glance as he cheated on his diet.

Of course, we must acknowledge the cuisine. Fat cells grew early from the menu option that included soup/salad and spumoni. We didn’t count calories or worry about the green food coloring or red maraschino cherry dye in the ice cream slice. Family members urged us to “Eat up. It’s good for you,” and we did. We relished the veal parm with a prequel of smelts. Even tripe, an anathema to my young palate, was available, reassuring diners that this Italian kitchen is the real deal. A side of spaghetti or ziti was served, a meal in itself. The seasoned waiters always obliged my mother’s preference for aglio e olio, apprehensive perhaps that the chef’s ragu might challenge her own Sunday gravy?

It never mattered that we were not eating in private. Voices were raised and arguments shouted in the understanding the Old Canteen’s drapes were just a different fabric than those in our own dining room. We felt we were home with Joe, a benevolent uncle there to referee as he faithfully toured the tables. 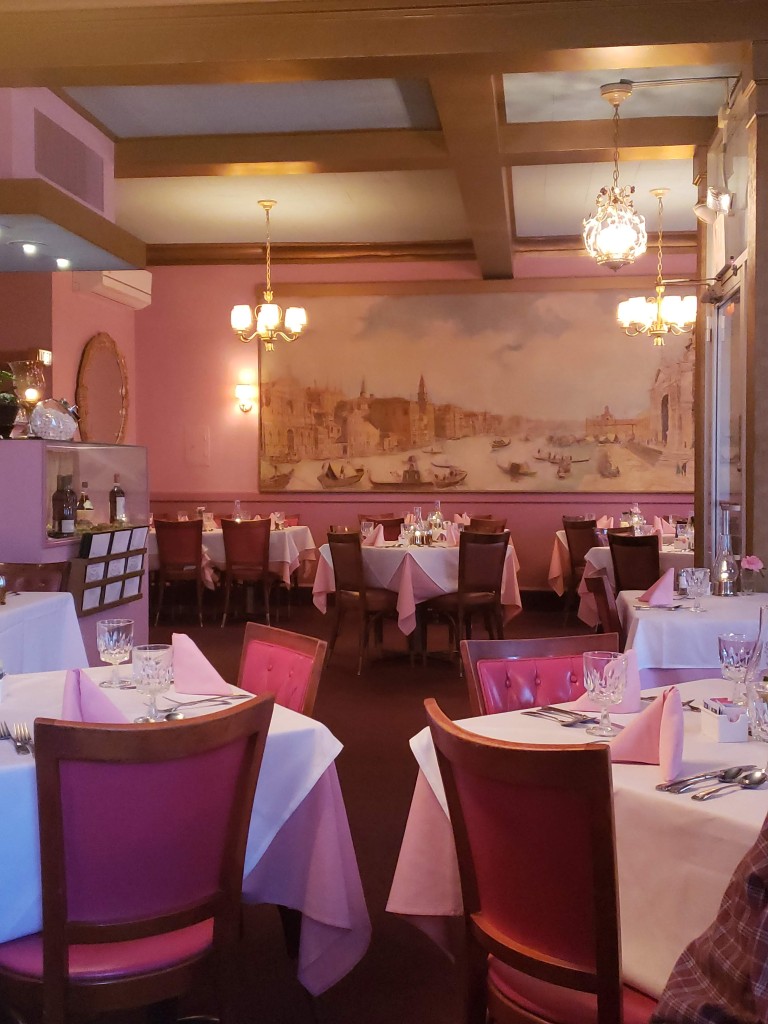 The dining room at the Old Canteen. Photo by Jamie Coelho.

Meals done, we hoped a crane might arrive to lift us to our waiting car reliably delivered by the valet. We passed under the rococo neon sign as if completing a station of the cross. We had worshiped. We were sated.

It is possible that, just as Joe’s lookalike son Sal managed to safeguard his late father’s creation, perhaps some new owners will realize they are buying more than a restaurant. They are taking on an institution with all the venerated tradition in which Italians invest great stock, especially where food is concerned.

But whoever takes the challenge, let’s hope it’s not a sure bet that we should all short pink paint futures. Is that interior hue likely a relic of the past, to be consigned to an era when cholesterol was not a phobia and gold-wrapped pats of Land O’Lakes butter were served with the bread.

Perish the thought that little plates of olive oil will be delivered by a young waiter advising us to “Enjoy!” Please no, new Canteen. I would almost rather see the old one die with dignity. 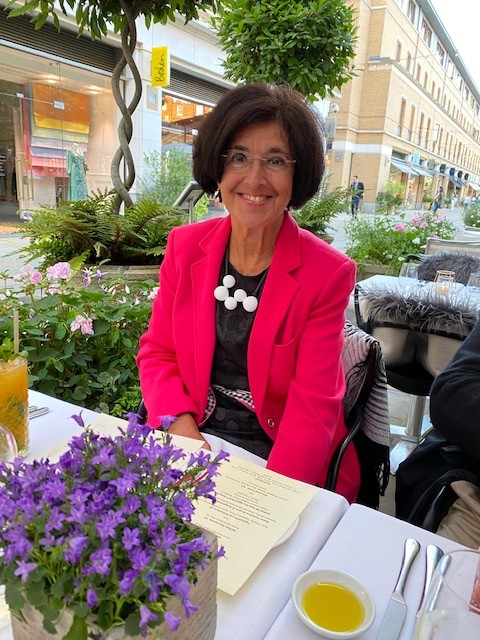 Mary Narvell is a Rhode Island native now living in the United Kingdom. She is a graduate of the Lincoln School and Wellesley College. As it happens, she’s back in Rhode Island for a month this summer, and will be definitely having a “last supper” at the Old Canteen.

Al Fresco Dining on Federal Hill is Back for the Summer