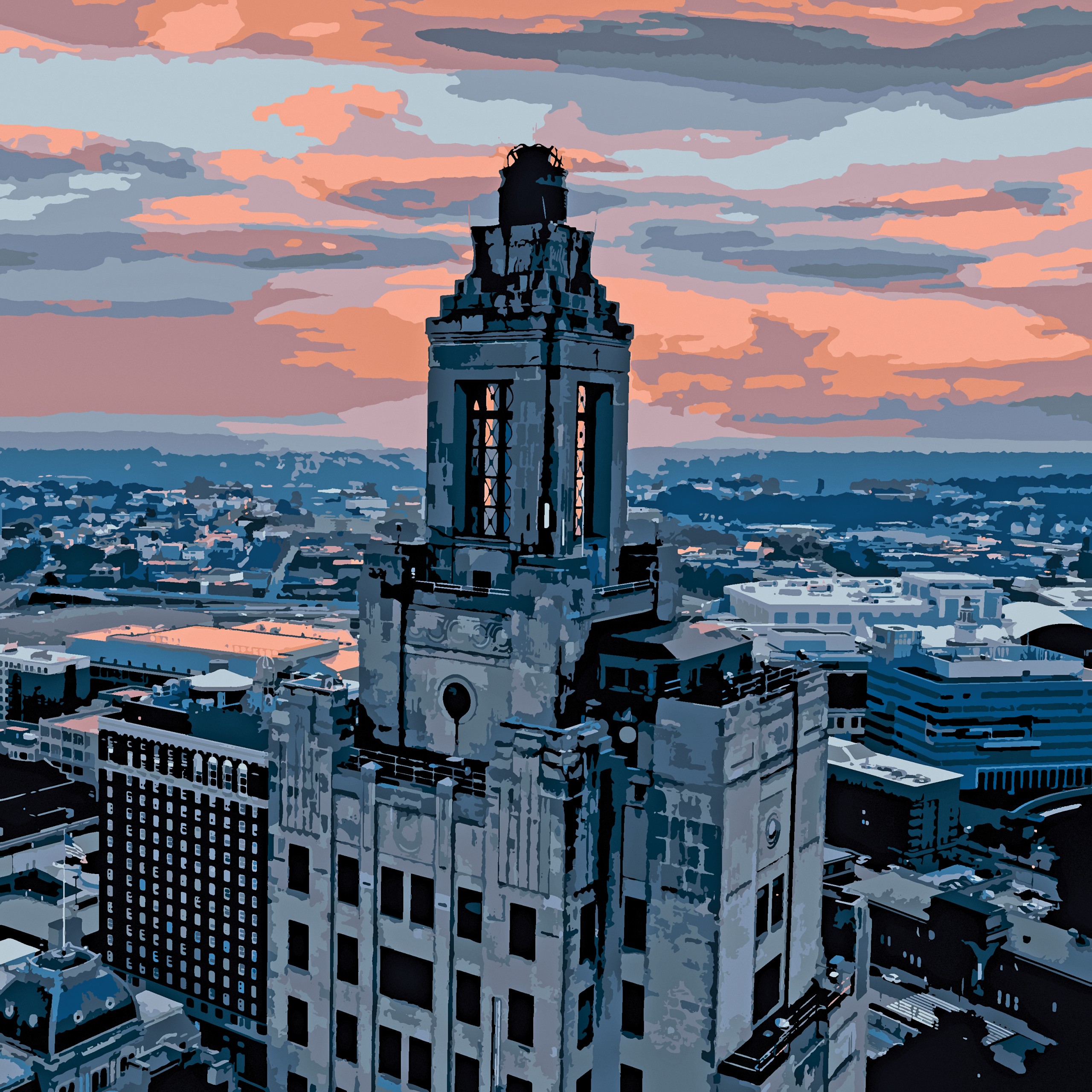 Long before we met on the wild steppes of the Internet, we gathered on the cobblestones of the agora or the grassy village green to conduct our business, our political debates and our friendships. Eventually, the supermarket replaced the farmers market, commercial real estate gobbled up the urban acreage and the town square fell out of fashion.

But a revival is afoot in Providence, where a rare confluence of cash and political will has produced a new grand plan. As the dreamers dream it: The iconic Industrial Trust Building (aka the Superman Building) is again ablaze against the night sky, while throngs of new residents shop at the organic grocery store on Washington Street or pick up dinner at the new Union Station food hall. Theatergoers take in a performance under the Kennedy Plaza pavilion. Transit riders wait comfortably for the next bus in an indoor terminal on Dorrance Street; pedestrians stroll unimpeded over Memorial Boulevard on a new elevated platform.

It marks a shift in thinking about downtown as strictly a place to work to thinking about it as a place to live, says Providence City Planning Director Bonnie Nickerson. “Part of that is having all the services and amenities to create a thriving neighborhood. This is an investment in the city’s front yard and its civic heart. A lot of things people have been working on for a long time are coming on line at the same time. It’s exciting.”

In the next few years, hundreds of millions in state, federal and private dollars will be plowed into a fifteen-acre swath of the city’s center to invigorate civic life.

Providence is investing $140 million in major improvements to Waterplace Park, the Riverwalk and Kennedy Plaza, conceived in consultation with the public and design firm Arup. The plan calls for part of Washington Street to be closed to traffic and Kennedy Plaza to transition from a transit way station to a destination, anchored with a shading structure for performances at one end and with a welcome center at the other. In between, the plans include a cafe, new ice-skating rink and splash park and a free space for youth activities. The walkways of the Riverwalk, which flood periodically, would be raised above the sea-level rise anticipated until at least the year 2100. A tunnel would link Kennedy Plaza to Waterplace Park, where the stage and seating would be upgraded and an experiential mist ring installed over the river basin. Programming — concerts, art installations and other special events — would keep these spaces lively and safe.

Urban planner Stephanie Rouse, who has written about the return of the town square, says that communities have begun reassessing its value — particularly in light of the pandemic, which pushed more public life outdoors.

“A lot of communities are finding that it’s important to reclaim those spaces and recreate the town square,” she says. “With COVID, a lot of people have lost what planners call that ‘second place’ [the workplace], because they now work from home, so it has been more important to have that third gathering space.”

After a decade of vacancy, the Industrial Trust Building will be redeveloped as an apartment building. Developer David Sweetser of High Rock Development expects to begin interior demolition and construction for 285 rental units at the end of this year.

“It is a very complex and unique project. Any historic or older structure is more costly to rehab. The other issue is the sheer scope — 380,000 square feet,” says spokesman Bill Fischer. “This has been going on since 2014 in fits and starts, and there have been different visions. We believed then that the highest and best use was as a residential purpose when a lot of people at the time wanted to see if a company could relocate there. But the days of that being a single-use tenant are long gone. Fast forward to 2022, everybody understands the housing market and how COVID has really changed commercial real estate.”

The financing was equally complex — cobbled together with $15 million in state tax credits and $11.2 million in additional funding; the city kicked in a $10 million low-interest loan, a $5 million grant and offered a thirty-year tax break. The Rhode Island Foundation will make a $15 million bridge loan against the tax credits.

“We bargained hard on behalf of Rhode Island taxpayers,” says former Secretary of Commerce Stefan Pryor, who resigned in June. “It all came together to create the deal that we are now advancing. The stars are aligned; the key public officials are all in agreement, along with the public agencies and Rhode Island Housing. This project definitely has positive momentum. We are all very optimistic.”

“That building is going to be the linchpin to the redevelopment of Downcity,” says Rhode Island Foundation CEO Neil Steinberg. “It is beautiful — an economic development engine, an anchor and a beacon. We were very bullish on it.”

The Rhode Island Public Transit Authority is closing in on an infrastructure redesign — also dating back to 2014, when the voters approved a $35 million bond for transit improvements. The much-reviled multihub proposal pushed by the state Department of Transportation is gone. The new Dorrance Street Transit Center will feature a 27,000-square-foot building with passenger waiting areas and restrooms, administrative offices, covered bus stops and a parking deck. RIPTA is weighing the addition of an adjacent mixed-use building with retail on the first floor, housing on the second floor and a public meeting space with an open-air terrace.

The agency hopes to leverage the $21 million left over from the bond and snag a $29.7 million federal grant to finance the construction, which it hopes to start next year. In May, RIPTA issued a request for expressions of interest, looking for a private development partner.

“This gives us a whole new opportunity and skin in the game to build it from the bottom up, instead of reacting to the forces around us,” says RIPTA CEO Scott Avedisian. “We are going to be able to give [the riders] things they have told us they wanted for years and we didn’t have the ability to do in Kennedy Plaza because we didn’t own it.”

Each of these projects has been conceptualized with sustainability and social equity in mind. The Industrial Trust Building will be energy efficient, with 20 percent of the units set aside at below-market rates for residents earning 80 to 120 percent of area median income — $48,450 a year for a one-person household. The Kennedy Plaza design will accommodate homeless people with public restrooms — possibly including showers — heated areas in the winter, shelter from the elements and inexpensive storage areas. RIPTA is offering its customers comfort and more frequent and expanded service, for longer hours, including ten new routes and six new rapid bus lines to serve an anticipated influx of new riders.

But suspicions linger, especially among transportation and housing advocates who worry that marginalized populations could be displaced in the name of progress.

“Objectively speaking, there are advantages,” says Patricia Raub of the Rhode Island Transit Riders. “But we all are somewhat upset by the appearance of being moved out of Kennedy Plaza to make room for a more upper-middle-class and tourist-oriented park.”

Housing advocates point out that the Superman “affordable” units are not affordable for many.

“I understand wanting to beautify downtown, but we have to make sure everyone has a place to call theirs no matter who they are and no matter what their circumstance,” says Margaux Morisseau, deputy director of the Rhode Island Coalition to End Homelessness. “We’re looking at holistic solutions that provide options that meet everyone’s needs, including supportive housing and housing for people with zero income.”

For the Marsella family, which hopes to open the 20,000-square-foot Union Station food hall, with thirteen food stalls and two bars, in the spring of 2023, this is just the next step in the evolution of the Capital Center. Forty-five years ago, patriarch Rom Marsella, then president of the Providence Foundation, had the crazy idea to move the train station and the elevated train tracks that formed a wall separating the Statehouse from the rest of downtown. It took twenty years of wrangling among property owners, power brokers and preservationists, but the wall came down and the rivers were moved.

“It was the right time and the right place” says Chris Marsella. “It opened up the Capital Center and sparked the
renaissance in the early 1990s. This is renaissance 2.0, bringing more people into the city and activating these wonderful public spaces. At the end of the day, how many other cities of our scale have had this ongoing regeneration?”