The program has been using soccer and study to help kids get into their dream high schools for more than fifteen years.

“Tell our visitor why you had to go to re-direct,” says Skehan. Re-direct is extra classroom time assigned when a student acts out or doesn’t complete his or her homework.

“And what did you learn from that?” Skehan asks.

“Well, I learned to use my words instead.” Brandon has big dreams for his future. “I want to be in the NFL, but if I can’t get that, I want to make it to FIFA, but if I don’t make it into FIFA, I’ll be a businessman, but if I can’t do that I’ll be an architect.”

He smiles, and excitedly explains that he’s loving his first year at Project GOAL and if it was just soccer it wouldn’t be as fun. Skehan smiles and whispers, “This little boy is golden.” 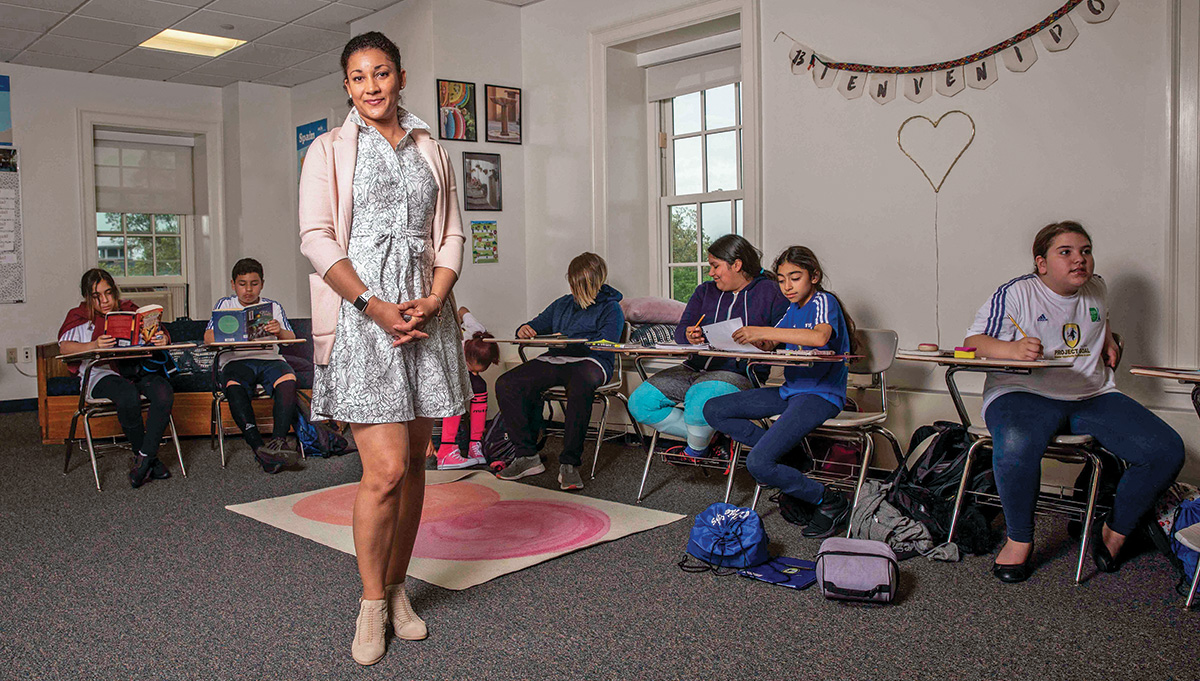 Lead teacher Opal Alves is one of the two original teachers in the Project GOAL program.

While Skehan’s class skews younger, co-teacher Javier Gallego works with older students who bring their own set of challenges. By day, Gallego teaches Spanish and French at Providence Country Day School in East Providence, and on Tuesdays and Fridays he comes to Project GOAL to teach and to coach soccer. His enthusiasm for the program is palpable: His voice rises when he talks about how the students he’s worked with at Project GOAL have grown and become successful in their own rights.

“I’ve seen big changes in kids. Like with him, number twelve,” he says nodding his head in the direction of a kid sitting in the bleachers. “Christian is Cape Verdean and his attitude was terrible! Oh my God, he wouldn’t follow orders. He was always cursing, he was always leaving, and right now — not that he’s there entirely yet — but he’s a more respectful person, he wants to be here and he feels respected.”

Thirteen-year-old Christian Semedo immigrated to the United States when he was eleven and is passionate about music and soccer. He recently got in trouble with Alves because he was swearing in Cape Verdean Creole, but Gallego has also seen another side of this youth in transition.
“We recently finished an essay on being a philanthropist, and he talked about how we should spend time with the elderly, and how we should be talking to them and listen to their stories,” he says. “His essay was really great and I couldn’t believe that this idea came from him. A kid his age! So I see a lot of positive things. The ideas that these kids have are so deep and encouraging, and that to me tells a lot about the positive effect this program has on their lives.”

Part of Gallego’s belief in the program and empathy towards his students comes from his own background and the challenges he faced as a child growing up in Colombia, and as an immigrant to the United States.

“I was born in Envigado, Colombia, and so ever since I was a child, I lived a difficult life, I was in difficult places,” he says. 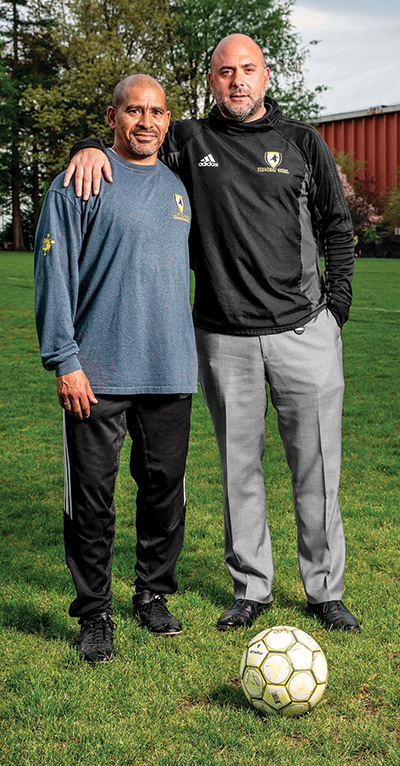 The youngest of sixteen siblings, Gallego came from a poor family. His parents worked hard to survive and give their children a better life. He sees his story and achievements as a way to inspire the kids in Project GOAL. “By being exposed to difficult environments and doing the right thing, having integrity and working hard, you can achieve a lot of things, and that’s what I’ve done here in the United States,” he says. And coming to the United States wasn’t easy. When he immigrated to North Carolina with his wife and young son, he was surprised at how unfriendly people could be. And even after having teaching jobs in North Carolina and Rhode Island, he had to return to South America multiple times when his visa expired. He finally got a job at Providence Country Day in 2004, and got his citizenship in 2013.

“I have had such a wide range of experiences, and I think that initial hardship has its pros. Right now, I live very comfortably, I work and I do what I do happily,” he says. “I have a lot of real-life experience to pass onto these kids, and I think they see that and they kind of admire that in you, that you didn’t get things for free, that you have to work hard.”

And work hard they have. According to a report by Alves, in the 2018–2019 school year, 65 percent of Project GOAL students achieved academic excellence (receiving grades of B or higher), and 95 percent improved their grades over the academic year. Graduates have attended the University of Massachusetts Amherst, Worcester Polytech Institute, the University of Rhode Island and more. Plus, Project GOAL has partnerships with local colleges like RIC, Brown, Providence College and more to connect kids to student-athletes who put education first. In the meantime, the kids at Project GOAL have a mid-winter check-in and drill day that helps the kids revisit the goals they set for themselves in August.

These programs and opportunities, which might have been unattainable, are changing kids’ lives.

It’s a temperate March evening at the Rhode Island Country Club in Barrington. As the sun slips below the horizon, families and friends of Project GOAL students gather for the annual GOAL Cup Cocktail Night. Parents mill around, dressed to the nines and giving out hugs to Alves, Shirzadi and the other teachers and coaches who bring Project GOAL to life.

Just as the clinking of wine glasses and good conversation reaches a crescendo, the emcees of the event, a soccer-comedy duo from New York called the Cooligans, call for everyone’s attention. After some wise-cracks about the game they introduce twenty-six-year-old Mitchell Tiah, who was a student in the early days of Project GOAL and went on to play soccer at University of Mount St. Union in Ohio. Today, he is a financial analyst for Washington Trust Bank.

Tiah dons a crushed velvet maroon blazer with matching slippers. After making some jokes of his own, the laughter quiets down and he gets serious.

“I’m going to try and not to get too emotional, as this is surreal for me,” he says, his voice catching. “Not too long ago, I was in Project GOAL, and I was very blessed as a child to be a part of something that is very special for a lot of kids.”

He says his family moved from Liberia to Providence when he was around eight years old, and how his single mom worked two jobs to make sure there was food on the table each night.

“On the surface all seemed well, but my siblings and I had difficulties adjusting to the new environment we were in. We weren’t permitted to play outside because of the rise in violence and conflict in our neighborhood, and we longed for some familiarity between our new home and our old home,” Tiah says. “And it wasn’t long before my brother and I were introduced to an after-school program that would bridge the gap.”

It was hard for Tiah to believe; he thought it might be too good to be true.

“I’ll be honest with you: I almost laughed out loud in disbelief and skepticism when the concept of Project GOAL was explained to me,” he says. “The thought that strangers who I’ve never met, like yourselves, care so much about my well-being and upbringing to create a program that serves as a safe haven for kids from all different backgrounds….” he shakes his head. “And if that wasn’t unbelievable enough, they had the nerve to tell me that this would all be free of charge, and that my mother, who was already struggling to keep the lights on, wouldn’t have to pay a dime.”

As with Carolina Santos, Brandon Molina and Geronimo Idarraga, and the other students who have been through the program since its inception in 2004, Tiah found out that Project GOAL kept its promises.

He is met with applause, and the crowd disperses past the signed soccer balls, jerseys and other items up for auction. But among the sports paraphernalia is something incongruous: a large painting of waterlilies by fifth-grade student Carolina Santos.

Her mother, Patricia Santos, stands across from her daughter’s work, selling auction tickets for wine packages. She smiles when talking about Carolina, who is in Mr. Skehan’s class and who, before joining the program, was a “girly girl.”

“But after joining Project GOAL, something clicked, and she told me that she didn’t want to do ballet anymore,” Patricia says.

What’s even more remarkable is the growth of her self-confidence. “It’s such an extraordinary experience,” says Santos.” She’s become more confident and determined since joining Project GOAL.”

Her painting, with its large white lilies floating on a pool of blue, is an embodiment of this. Carolina drew inspiration from the idea that Project GOAL helps students succeed and the program has certainly done that for her: she was accepted to all the private schools she applied to and will be attending Moses Brown (her dream school) with a scholarship in the fall. It’s no surprise then that the title of her painting is what Project GOAL helps its students do: rise and shine.