The program has been using soccer and study to help kids get into their dream high schools for more than fifteen years.

It’s just shy of dinnertime on a cool March day at Calcutt Middle School in Central Falls, and the gym is a blur of neon pinnies, shin guards and soccer balls. Some kids whoop, shout and cheer on their teammates as they battle it out on the wooden floors, while others wait, antsy for their turn, fingers jammed under their thighs in anticipation.

The whistle blows, the team with green pinnies comes off the court, and the orange pinnies rush on to play blue.

Darius Shirzadi stands to the side, hands in his pockets, watching the action unfold.

This biweekly display of soccer camaraderie is one facet of Project GOAL, a nonprofit program that Shirzadi, along with co-founders Javier Centeno and Peter Whealton, created in 2004 to encourage academic excellence through sport.

An hour or so earlier, these same kids were sitting in classrooms getting extra help on homework, creating goals on how they can improve both academically and behaviorally, preparing for the private school entry exam, and writing thank you cards to program donors. For these kids, many of whom come from minority communities in tough parts of Providence, Pawtucket and Central Falls, the program is the beginning of a successful athletic and academic future. 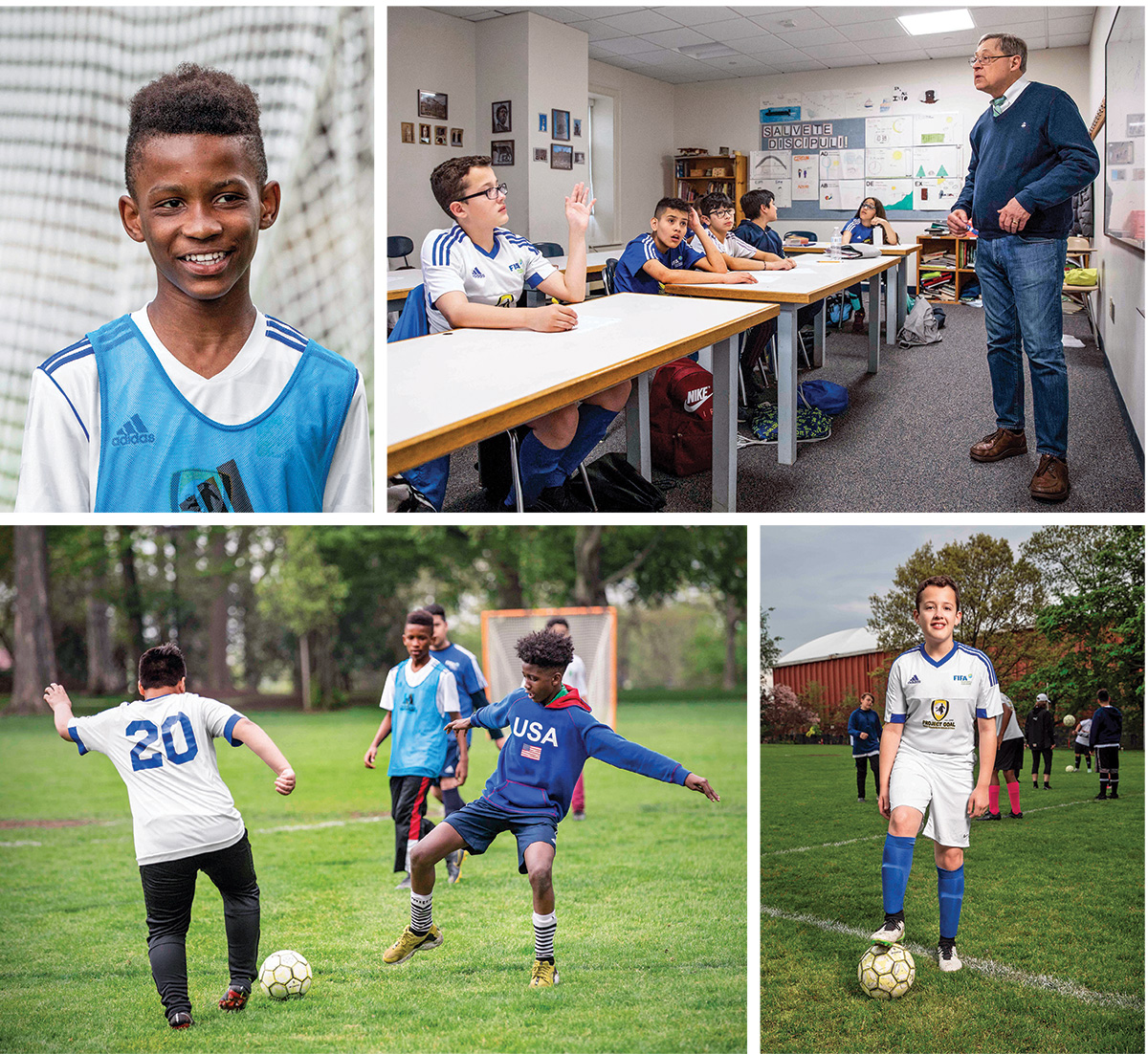 “We wanted the program to focus on academics, and used soccer as the carrot to entice the kids and keep them focused,” Shirzadi explains.

Every week for a little over nine months, seventy to eighty students ranging from ages nine to fifteen are either bussed from their schools to the program or returned to the school at 3:30 p.m. for homework help and to play soccer with their peers. And the best part? It’s all free.
Opal Alves pulls a plastic crate filled with papers onto the elevator at Calcutt.

“I call this my office on wheels,” she says, spilling contents of her folders onto the floor. Alves lugs report cards, papers and other files with her to the second floor of Calcutt and later, when the weather improves, Moses Brown (the two schools lend their space to Project GOAL every year alongside Wheeler and Brown University), as part of her role as director of administration and grant writing and lead teacher of Project GOAL.

Her background is in finance, but after spending five years in banking and insurance, she bucked her career trajectory, got a degree in education from Rhode Island College and taught elementary and middle school for ten years before teaching English in South Korea for two years. Now, she’s back in Rhode Island and, as the only full-time employee of the nonprofit, helms all day-to-day activities.

She’s constantly popping into classrooms to tell students to bring permission forms for field trips, asking students who are roaming the hallways where they’re going, or speaking with Shirzadi about their latest fundraiser.

Today, Alves sits at a desk in one of the classrooms used by the program, scanning field trip permission slips, while another teacher attempts to corral kids who were disruptive during classroom time or who didn’t finish their work.

“Does this look okay, Ms. Alves?” one boy asks, showing her his work. She looks it over, reads a sentence aloud, and asks him if he thinks he’s missing a word. He smiles sheepishly and returns to his seat to correct his mistake.

“The first year we had the program, it was mostly divided between Liberians and Colombians, who were immigrating at the time,” she says as she feeds a paper into the scanner. “At the beginning, they would sit on separate sides of the classroom, but as time went on they got to know each other and formed strong bonds.”

Today, the program enrolls around 120 students annually, with an even more diverse mix of kids. “We have recently had a large influx of Cape Verdeans, and a more diverse group in a socioeconomic sense,” says Alves.

Besides its changing demographic, the program has evolved in other ways since its inception in 2004.

Shirzadi was first inspired to start Project GOAL during his time working with the New England Revolution. “At the same time that I was interning at the Revolution after college, I was offered to run their semi-professional minor league team here in Rhode Island, the Rhode Island Stingrays,” he says. “I became the general manager, assistant coach — basically wore all kinds of hats. I did that for five years, and to generate revenue, we came up with a camp program and clinics. It was very grassroots type of stuff.”

Then one day, the captain of the Stingrays, Javier Centeno, came to Shirzadi with an idea.