The classic cooking at this tiny French bistro in Tiverton reminds us why we love to eat.

Plouf Plouf’s roving red food truck was easy to love: a vehicular French dream buzzing around town doling out fries and duck confit for a quick shot of afternoon culture. But Mario Molliere and Anik Palulian’s restaurant in Tiverton is an altogether different experience. It’s a diminutive space — eighteen seats tucked closely together in parlor style. Gleaming white marble bistro tables are paired with slated picnic chairs or, occasionally, a rich velvet wingback for the night. A deep blue wall grips only a vintage mirror adorned with antiqued jewelry, a faded barn door slides over the kitchen entrance and large palm fronds drape in the corner. The dining room is about twenty feet long but, when the dishes are placed down, it opens up like a Proustian memory of time past. 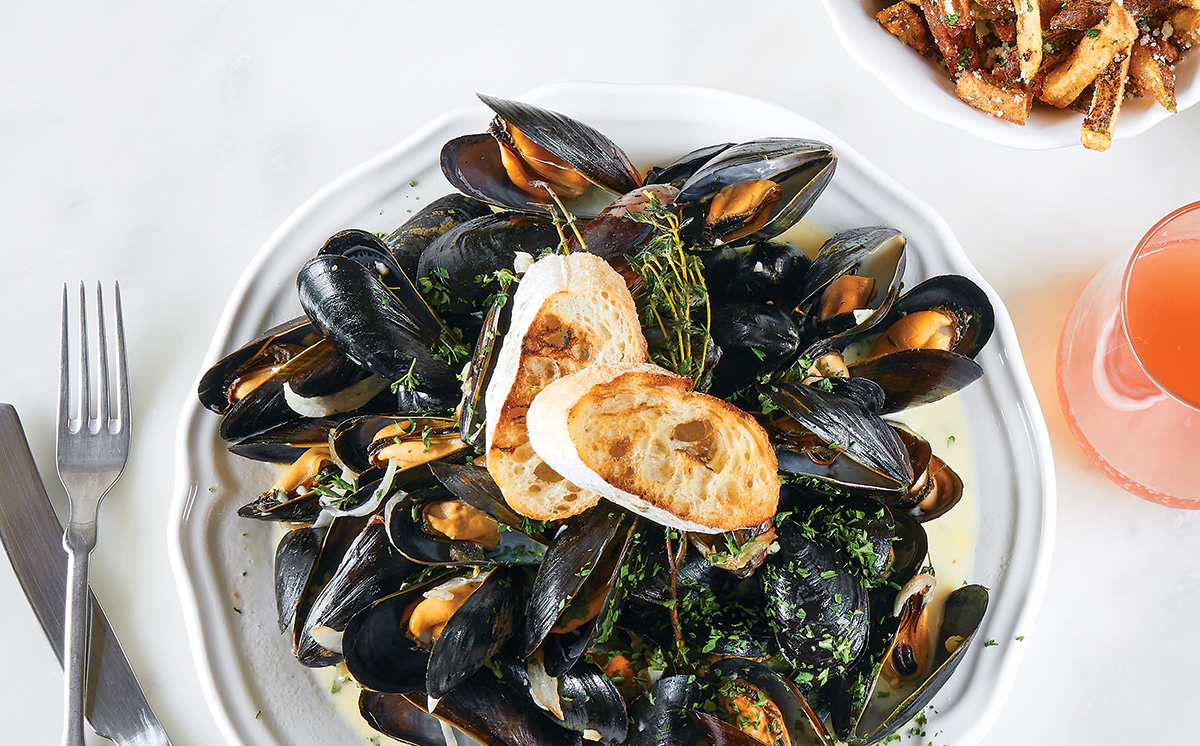 This is not a place to go for modern interpretation, nor for streamlined plates that place one ingredient in a glaring spotlight. This is Platonic French food, European history in a bite, and it relies entirely on time and a hefty dose of dairy. For anyone with a formal culinary education, Molliere’s cooking is a trip to the homeland, saturated with a sense of inaugural pride: mother sauces, classical technique, laborious detail, infinite patience. For those who simply like French food, this is still a time travel, a deeply romantic stroll into the derivation of why we love to eat. The crowd at Plouf Plouf is maturely distinctive: tables are sometimes full of septuagenarians in berets, newsboy caps and colorful reading glasses offering worldly wisdom of what once was. Packed, the room feels like a secret society that only accepts those eager to let go of the present. There is a visceral nostalgia in the air, paraded out in large boards of cheese ($23) and charcuterie ($19) that dazzle with excess. Americans may slice cheese but Molliere sends his out in decadent wedges, rind still attached because that’s as much of the story as what’s inside. Cheese also anchors the sweet sherry-infused onion soup, the very manifestation of French comfort food. Even the kid’s menu embraces indulgence. When a bowl of pasta swimming in cheese sauce lands in front of a young boy, he stops after a single bite to ask the table if they know the feeling of coming in from the cold into a lodge at the base of a mountain. “That’s what this macaroni tastes like,” he adds, with a nod of his head. (It’s a uniquely sensitive crowd.)
But the real thrill of Plouf Plouf is in the dishes that carry the weight of culinary heritage. Coquilles St. Jacques is hard to find on any menu these days — perhaps the gruyere-topped scallops have lost their cachet. But it’s a gorgeous preparation in Molliere’s hands, extravagant in its ingredients but so technically adept that it’s as intellectual in its presentation as it is hedonistic. This is the nature of French sauces and the heart of Plouf Plouf: so much goes into making things look simple that a diner might be tricked into thinking it could be easy. Every component, however, evolves slowly and, expectedly, braising is the kitchen’s modus operandi. Why sear meat quickly when you can cook it over a long period of time, building character and nuance by the hour? 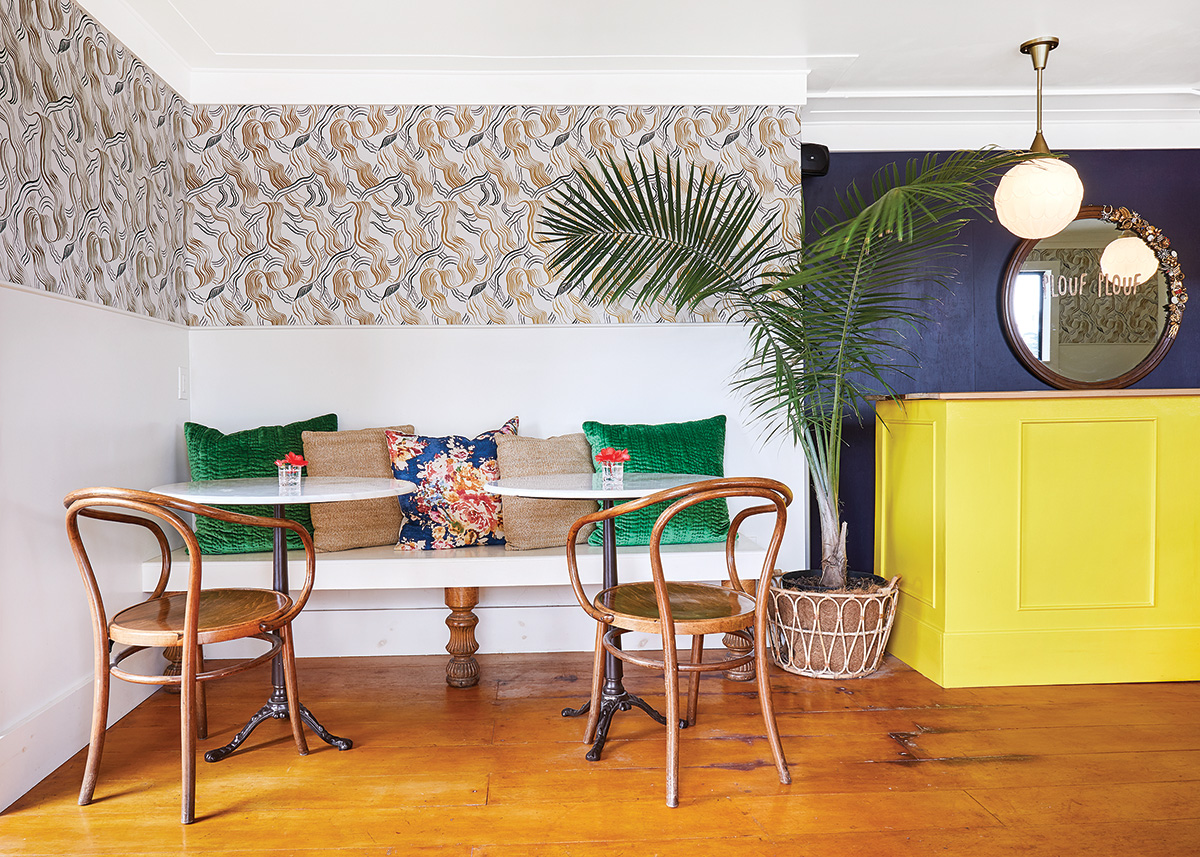 The crown jewel of the long cook is a special, Molliere’s cassoulet ($28), an old school amalgam of duck confit, garlic sausage, pork belly and beans. A knife is unwarranted but there is still marked variation in texture and flavor. It’s a declaration of cultural superiority and the American diners accept the throw-down with gracious appreciation. These diners are an integral part of Plouf Plouf: they arrive waving their own wine, subtly announcing whether the meal will be causal or if a c-note Cabernet signals something special. Whatever the decision, some sort of alchemy happens when a room full of Francophiles meet up with a proper bordelaise. The organic hanger steak ($22) that rests on it is superb but it’s the sharp shallot-wine sauce, drenching a haystack of frites, that grabs the microphone. If gravy is off-the-rack, a French sauce is haute couture, transforming everything around it into some heightened version of itself. Even roast chicken au jus ($18) sounds ordinary but, in this minute dining room, it’s the very best version of itself, tinged with thyme and truffle potatoes.

Charcuterie plate with a selection of imported meats and fresh grilled baguette. Photography by Angel Tucker

To understand the way Molliere tells a story is to picture a family dinner as it rarely plays out these days. Imagine that the youngest generation stays completely silent, in rapt deference to their elders who explain what it means to survive hardship, discover love and embrace humanity. It’s imagery from another generation and it lands — if the listener is paying attention — with more profundity than the present tense possibly can. Heaping bowls of mussels fill the room with the scent of sea and wine; duck breast nestles in sharp peppercorn brandy sauce ($21); even gnocchi becomes ethereal under layers of cheese, cream and smoky ham ($16.50). 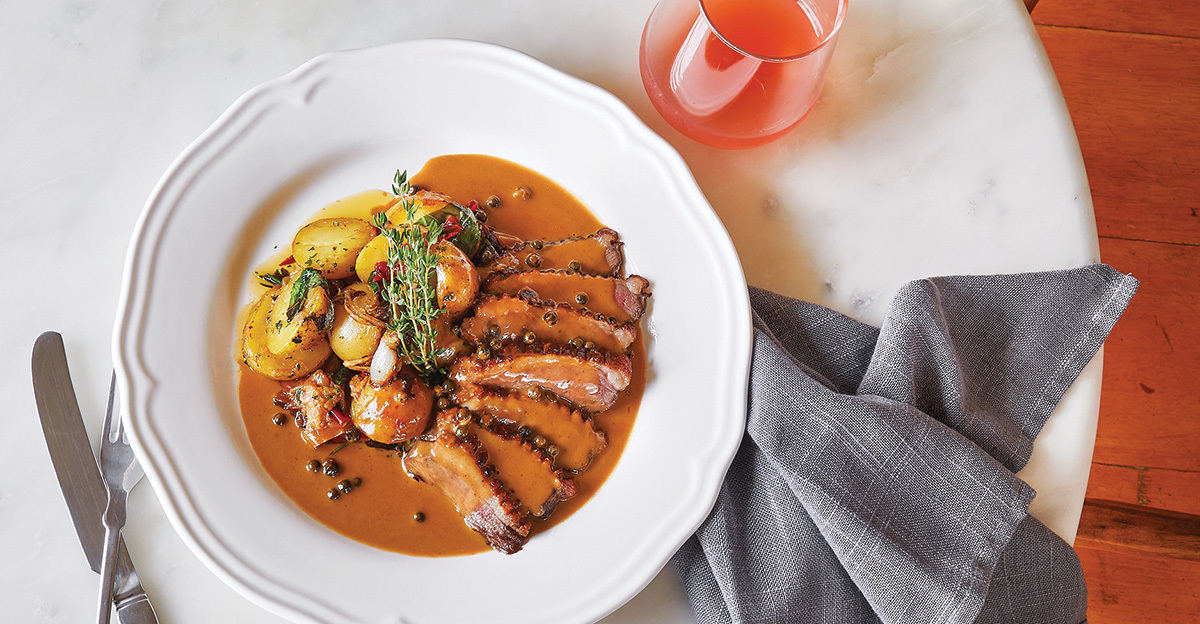 Sadly, the quixotic bubble may burst quickly. Four steps out the door and you’re a car’s length from the main road and right next door to Helger’s ice cream shop. But at the table, Europe is all-encompassing for the evening. Even desserts are variations on a classical theme: combinations of eggs, sugar and cream that, in different ratios form crème caramel, crème brulee or mousse ($6-$7). A handful of rum-soaked raisins embedded in bread pudding ($9) are just romantic enough to erase the here and now altogether. It’s not that we’ve lost an appreciation for everything new on the culinary horizon; innovation is an adventure all its own. But to step back in time to the moment France turned food from a diversion to an artform is to walk the museum of our very best days. Molliere and Palulian have opened a trap-door that leads back to where restaurants started, where the formality of a meal lay not in the décor but in the effort of the chefs and everyone who came before them. 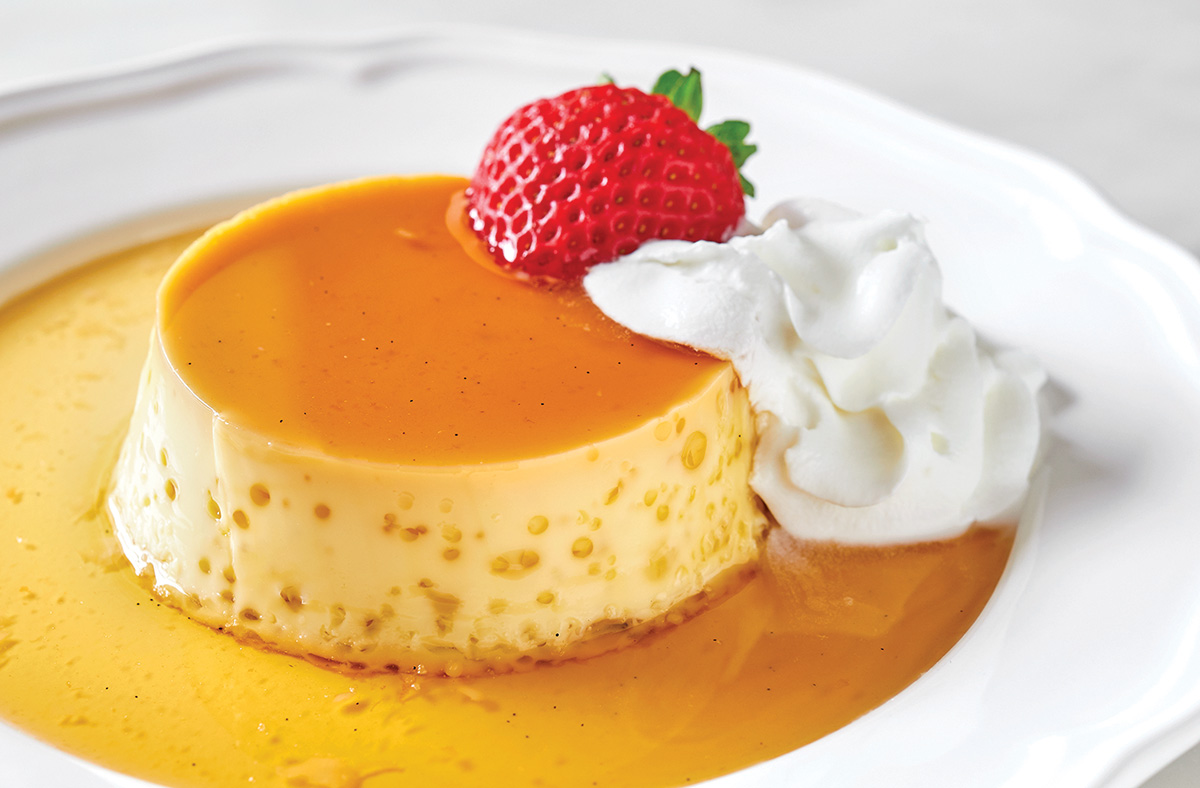