Behind the Barn Doors at Wright’s Dairy Farm and Bakery

The North Smithfield farm produces milk and sweet treats that are udderly delicious.

Long before the sun comes up, a handful of farmers arrive at the milking parlor at Wright’s Dairy Farm. The cows need milking, the calves need feeding and the barn needs cleaning. It’s 3:30 a.m., but their work day has only just begun.

And for Cathryn Kennedy, dairy plant manager and a fifth-generation Wright, her day doesn’t start much later. Kennedy and a few others come in at 5 a.m. to pump milk from the milking parlor using a pipeline that travels above the driveway to the creamery in the main production building. The raw milk is separated and clarified, homogenized, pasteurized and bottled before hitting the store’s shelves. The process? It wasn’t always this way. 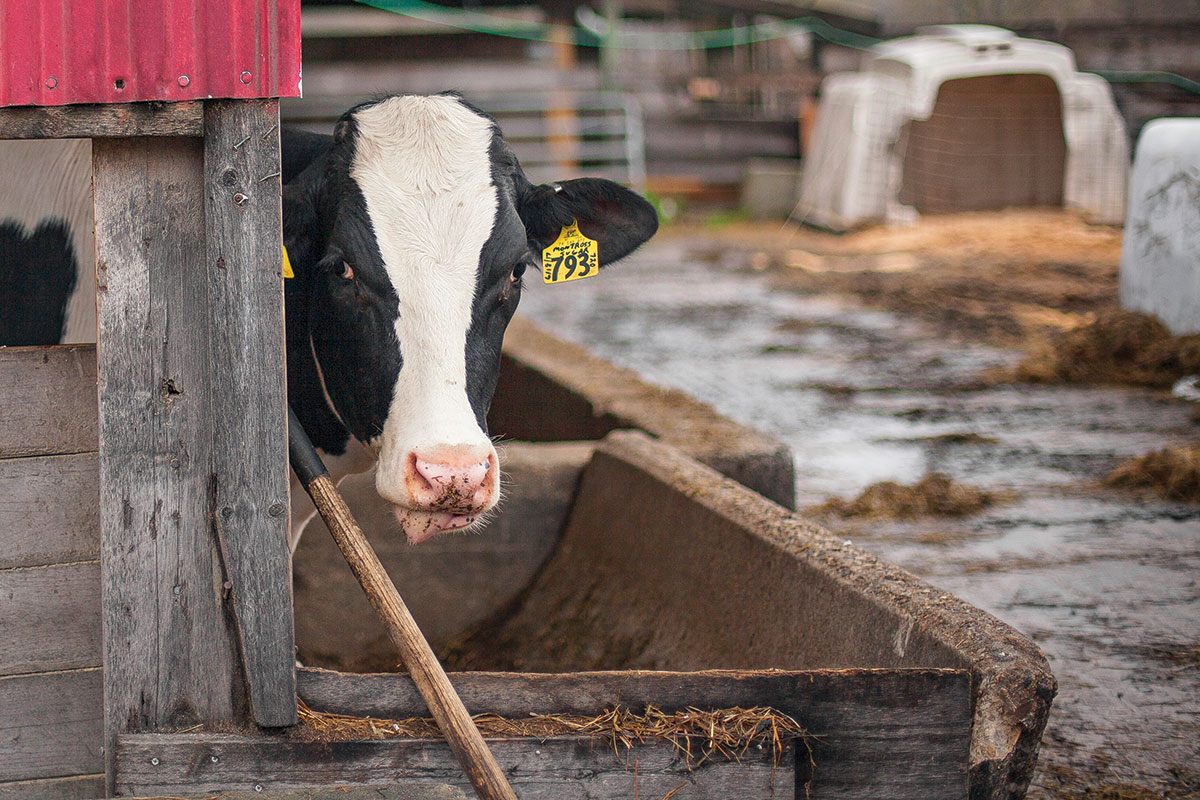 In 1914, George and Leonna Wright began their business as a homestead dairy farm, one of many of similar size and nature in the area. Their cows were milked daily and their products were delivered on a horse and buggy route to their loyal local customers. Then, in the 1930s, pasteurization of raw milk in the state of Rhode Island became mandatory. Many small homestead dairy farms closed due to the cost of pasteurization, but George decided it was worthwhile to invest in pasteurization equipment and open a small processing plant. This was a major turning point for the business because many other farms that stayed open had to sell their milk to a processor; the Wrights, on the other hand, kept it as local as it could get. Without realizing it at the time, George and Leonna set up their family farm protocol for several generations to come.

For quite some time after, the milk was vat-pasteurized, killing off any microbes that could be potentially hazardous to humans on a low temperature setting for a long period of time. The milk was still sold through a home delivery route, but in the late ’70s, Cathryn Kennedy’s grandparents, Ed Wright (the third generation) and Claire Boudreault, stopped delivering to customers. Sales were declining, and people were more mobile and wanted to leave home to purchase their products. As a result, the farm opened its first retail store and bakery items were sold with humble beginnings on the honor system. 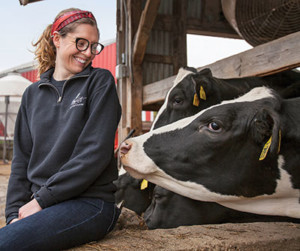 Around the same time, customers were demanding skimmed milk from suppliers, as they didn’t want fat in their milk. So the Wrights began skimming the cream off the top of the milk, leaving them with a heavy cream product to find good use for. According to Kennedy, her grandmother is quite the exceptional baker, so it was no surprise that Claire began incorporating the heavy cream into delicious baked goods like cream pies, cream cakes and more. She made other classic desserts including cream puffs and chocolate cream pies that fondly became known as Claire’s Classics. These pastries can still be found in the retail shop, and, if you’re lucky, Claire can be spotted behind the counter assisting customers, too.

“We just can’t get her to slow down,” says Kennedy with a laugh. “She loves being involved and is all about the customers. One time, someone purchased a gallon of milk on a summer day and it happened to leak in their car. My grandmother replaced the milk for them and went so far as to even wash the floor of their vehicle with a bucket of soapy water. She is all about making people feel welcomed when they step foot on our family farm.”

For a more in-depth look behind the day-to-day at the farm and to see what this family business is all about, customers can also watch the cows being milked to learn exactly where the dairy is coming from and how it is handled. It begins at the milking parlor behind large glass windows, where the equipment is sanitized and the cows are corralled into a holding area of free stalls. The 105 cows that are currently milking flow right into their positions in groups of twenty, where a milk machine is attached to their udders after a quick once-over for any obvious problems by the farmer. Each cow has a numbered collar that links up to a computer system that tracks production, conductivity, activity, temperature and more. If anything is abnormal, the farmer pulls the cow for testing. Once the cow checks out, the raw milk is extracted using an air-driven process that takes about ten minutes.

After the cows are milked, the liquid product gets pushed into a bulk tank that holds 2,000 gallons of milk and is filled to the top every two days. The bulk tank is connected to a stainless-steel pipeline that arches over the drive, through the production facility and into the creamery where the raw milk is processed.

Kennedy helms the dairy room and this is where she contributes most to her family farm. “Before the milk can be bottled, there are several steps,” she says. “First, the raw milk must be separated and clarified. The machine that does this is a large centrifuge that spins super-fast to allow anything like dust or dirt from the farm to get pulled aside. It also allows the cream from the milk to be pulled from the pipe. If we are processing skim milk or a 2 percent batch, it will continue on without the cream and get pasteurized. The leftover heavy cream will be pulled and put into a milk can to be used elsewhere.” 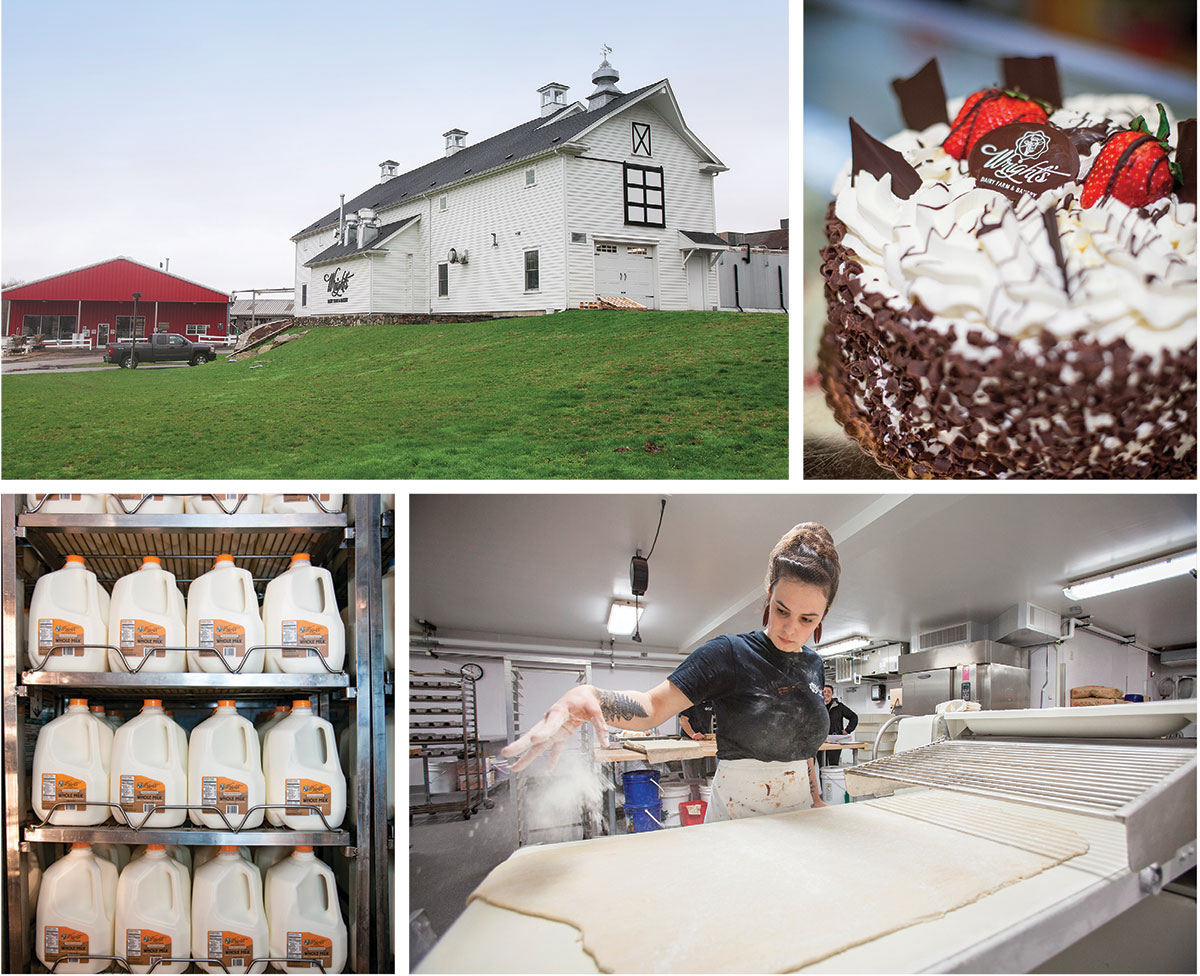 Top, left to right: Visitors can watch cows being milked in the milking parlor; a variety of cakes and other delectable desserts are available for purchase. Bottom, left to right: Milk, as farm-to-fridge as it can get, is sold on the shop’s shelves; pie making and other baking is done in the back baking room. Photography by Ryan T. Conaty.

After the milk is separated, it must be pasteurized. Unlike the old method of vat-pasteurization, today’s method, a continuous system installed by Kennedy’s grandfather in the ’80s, relies on high temperature over a short time for better efficiency. Through the pasteurization process, anything harmful that might have tagged along in the milk is killed. The system’s final pasteurization temperature is 162 degrees for at least fifteen seconds; then the milk is rapidly chilled and sent to the bottler in the final step.

Though pasteurization of dairy is a law in Rhode Island, it is not required in many other neighboring states including Massachusetts and Connecticut. This means that consumers can purchase raw milk straight from the cow. However, high quality milk starts on the farm. If the farm is dirty or cows are unhealthy, the result is bad milk. Kennedy says there isn’t great transparency in the dairy industry; consumers don’t always know exactly where their milk comes from.

“At most large farms, milk gets mingled together on a truck, so the traceability isn’t there,” she says. “It can get dicey. When someone buys milk from the supermarket, they might forget that there are also many layers of transportation, handling of the milk and more. It could sit on the farm for a few days, stay on a tanker truck until it is full and only then processed somewhere else.”

At Wright’s Dairy Farm, the milk from the cows is processed on site and is on the shelves within twenty-four hours. And it is tested quite often. Four times per year, the state checks out the dairy equipment to ensure all thermometers and pumps are working correctly. They also take monthly milk samples to the state lab for review. So, not only do Wright’s customers know that the dairy is safe to consume, but they also have a variety of good milk to choose from.

Most of the milk is homogenized, though this is not required. The milk is forced through a small hole and the cream particles are broken up and evenly distributed throughout the liquid. Without this step, the cream will clump together and rise to the top as cream top milk. Kennedy notes that it’s all about personal preference. In fact, 5,000 gallons of milk are processed each week and 80 percent of that is wheeled directly over to the retail shop; customers can choose from whole milk to skim milk, single servings to gallon jugs and everything else in between. 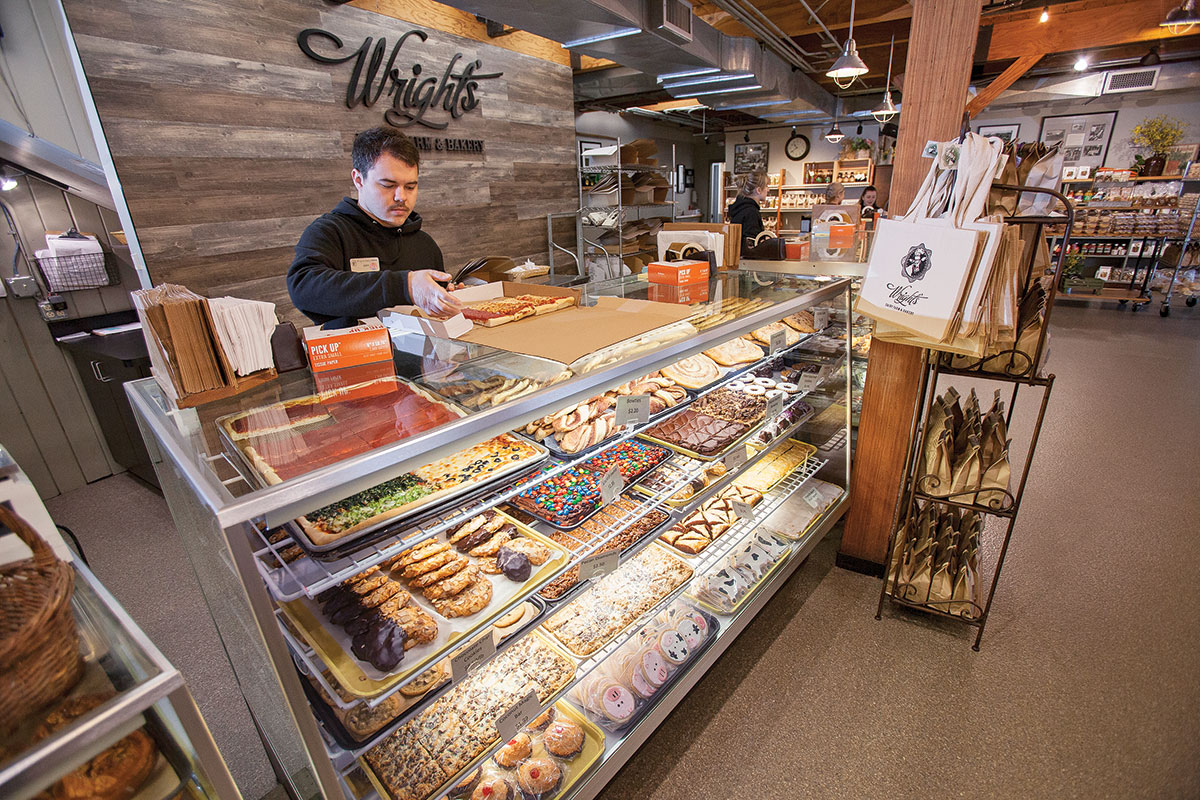 A large variety of baked goods are available for take-home purchase. Photography by Ryan T. Conaty.

Plus, a large variety of pastries and other delectable desserts offered in the shop have every taste bud covered. Bakers begin their day around 4 or 5 a.m. in the back mixing room, where large mixers the size of a small adult whip cake mix frosting, custard and more, using milk pulled aside in the dairy room. A separate area features walk-in-sized rotating ovens similar to revolving doors in the lobby of a hotel, and bakers hustle nearby using cookie depositors to pump out the perfect blob of dough, fill eclairs, cannolis and more. Hundreds of hot products are packaged perfectly, and cakes are decorated and placed in a massive walk-in freezer. While bakers move swiftly in the busy back bakery, the madness amplifies even more on Thursdays when ice cream is added to the mix. The farm’s milk and cream are combined with eggs and sugar to create sweet, cold treats of creamy consistency that are offered in several flavors like Compost Cream, black raspberry and more in the farm’s brand-new vintage ice cream trailer.

It is truly a family affair and all hands on deck at Wright’s Dairy Farm and Bakery, where Kennedy and the rest of the gang crank out farm fresh milk and delicious desserts for customers from sun up to sun down. 200 Woonsocket Hill Rd., North Smithfield, 767-3014, wrightsdairyfarm.com.