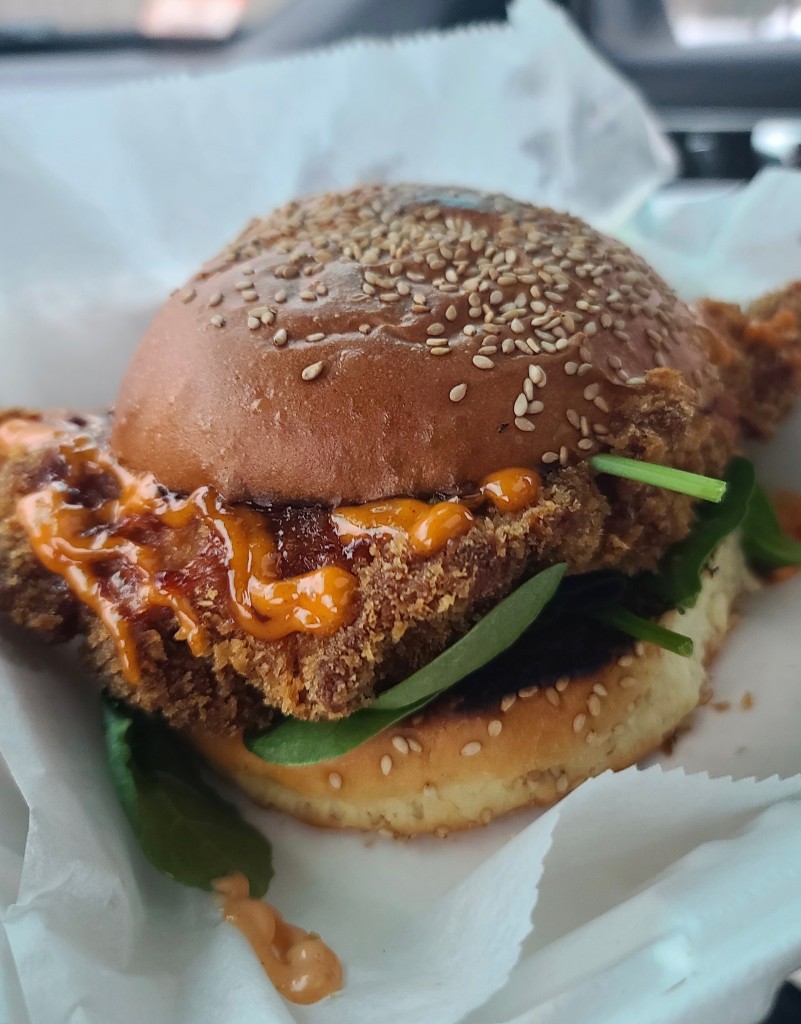 Editor’s Note: This article was updated from an earlier version posted in summer of 2020.

Husband-and-wife team Korn Suom and Josh Burgoyne of Ming’s Asian Street Food food truck  just launched a brick-and-mortar, takeout sandwich shop (the Sando Bar!) in Pawtucket’s Lorraine Mills. The mill space at 560 Mineral Spring Avenue in Pawtucket is open Wed.-Fri. from 4 to 8 p.m. and Sat. from 1 to 5 p.m., usually timed with the hours that neighboring businesses, Crooked Current Brewery and White Dog Distilling are open, too. It’s a convenient way to grab some food with local drink options, although the Ming’s team does a pretty steady takeout business on its own.

It’s all a part of their goal to expand the business and cover more events and catering. “The Sando Bar is a way for us to increase production in a larger space without the overhead of an actual restaurant,” said Ming’s co-owner Josh Burgoyne at the Sando Bar’s sneak peek opening back in early February. For their opening event, the team saw friendly faces from neighboring businesses come in to cheer them on and test out the new menu ordering system. They have an electronic menu posted on the wall, but customers can also pre-order directly on the website.

The Sando Bar is an intimate space with just a small table or two for indoor dining. Most of their business is takeout and event catering. They formerly used a space at the Lorraine Mills as a commissary kitchen, but this expansion allows for on-sites sales without the need for the food truck. There’s a colorful mural on the wall, painted by Taryn Nunez, who also painted murals at popular spots Helado Taiyaki and Casa Azul taqueria. Launching a brick and mortar spot was a long time coming since they started building out the space well before the fall. They had already overcome so many pitfalls running the food truck, so they were up for a new challenge. 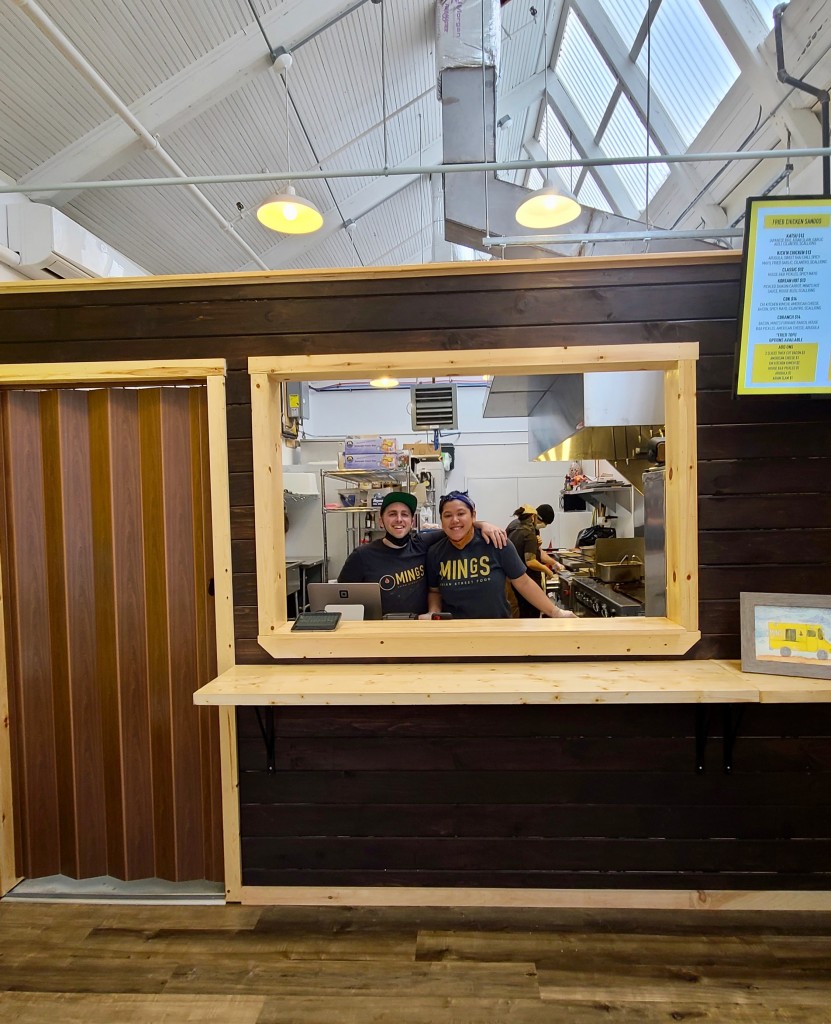 They started the food truck nearly five years ago. Neither owner had a professional culinary background, and then the pandemic hit two years ago. The couple had just returned from their honeymoon in March of 2020 when the COVID-19 situation began to take hold locally, and they had to figure out how to sustain their food business in rapidly changing times.

Ming’s Asian Street Food puts its own spin on Southeast Asian street food while reflecting on Suom’s Cambodian culture. The husband and wife work side-by-side cooking on the line together, and handling the financials and other tasks of running the business. The menu highlights include five varieties of Asian fried chicken sandwiches, street fries, popkorn chicken and a banh mi sandwiches spread with pate and stacked with a housemade pork patty made with ginger, sweet soy sauce, garlic and lemongrass, plus fresh herbs, cucumbers, jalapenos and cilantro.

Right now the most popular choices are the Kickin’ Chicken and Hot Chicken sandwiches, but not everything is super spicy. “We have so many different flavor profiles,” Suom says. “We have salty, sweet, sour and spicy and they all blend together to make one perfect bite.”

During the pandemic, Suom and Burgoyne had to think quickly about how to adapt their mobile food business after all events were canceled. Without any events to cater, they were forced to come up with alternative plans to make money. “We had about a month to reboot and rebrand,” Suom says.

They quickly embraced the positives. “We created an online ordering system, like every restaurant had done,” Burgoyne says. “One advantage of a food truck over a restaurant is the overhead is generally lower. With only three employees, we didn’t have the crushing overhead that restaurants have. Also, we’re mobile, so we could pick up and move to places where there were more people.”

The couple opened up service in the parking lot where their space was previously only a commercial kitchen at the Lorraine Mills.

“The most important part of the business has been pushing social media, and sharing our schedule,” Suom adds.

The couple started the food truck out of a shared passion for food. Suom’s mother and father immigrated from Cambodia in the early ‘80s to escape genocide and the war, and they quickly connected to the community at a local Buddhist Temple. Suom grew up going to the temple every Sunday and cooking and sharing meals with the other families there. 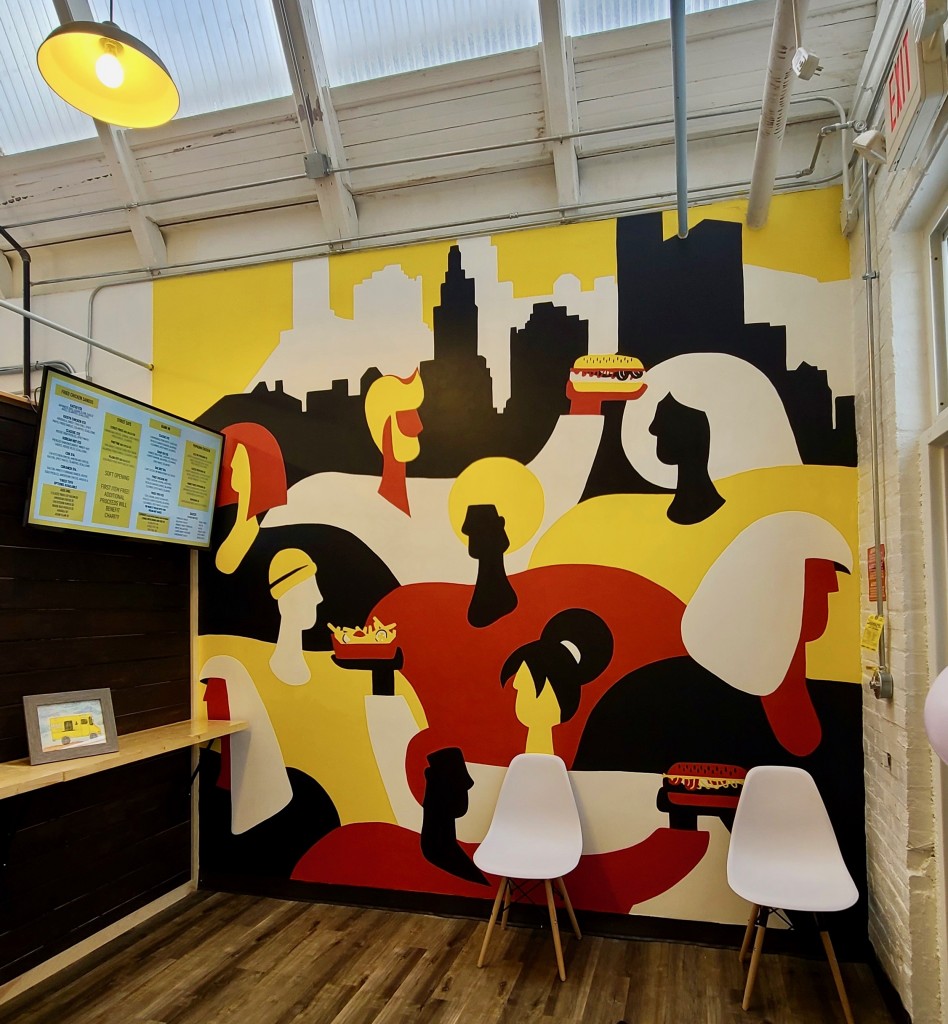 The mural by Taryn Nunez at Ming’s.

“There was the community aspect where everybody brings a dish and you share it with everybody after service,” Suom says. “I grew up making food with my mom and all the women of the temple and connecting through that experience.”

In Cambodia, “Ming” means auntie, says Suom, so that is the thought behind the name for their business. “If you are coming to Ming’s, you’re eating with family, with auntie,” Suom says.

The fried chicken sandwiches are their most popular items.

“Our hot chicken sandwich is a Korean version that has a Korean chili-based sauce, but it also has blue cheese and special pickles that are found in Korean or Vietnamese cuisine made from carrot and radish,” Burgoyne says. “It presents as an American dish but there are lots of authentic Asian components.”

Catering has picked back up, and they are bringing in business from customers who come to support other small businesses in the mill, such as Crooked Current Brewery and White Dog Distilling. They all support each other. Ming’s previously rented their commercial kitchen space from neighbor Chi Kitchen, and they still uses the kimchi on the sandwiches. They also source bread from Wayland Square Bakery.

They hope the Sando Bar will bring more business to the building. Even with all the challenges from the pandemic, Ming’s keeps truckin’ along, now in a brick and mortar space.

“It’s really satisfying to do it somewhat successfully, because it makes you realize, if I can do this, I can do pretty much anything,” Burgoyne says. “There are days when it’s really hard, but you pull it off.”

“Then a customer comes back and says, ‘That’s the best chicken sandwich I ever had, and it all makes it worth it,” Suom says.

Where to Find Portuguese Pastries in Rhode Island