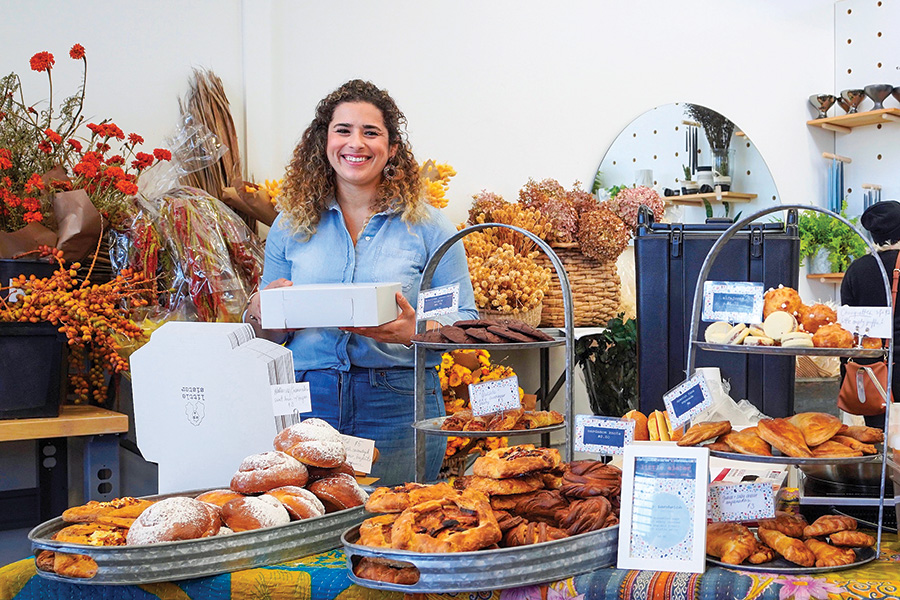 When Milena Pagán signed the lease for the retail space at 737a Hope Street in Providence in the summer of 2019, she had no idea what was in store. Her biggest issue at that time was naming it Little Sister and figuring out what she wanted to do with the space. Thoughts of an all-day cafe with breakfast and lunch options, plus more upscale evening meals, ran through her head.

But the jump from point A (leasing) to point B (opening) became the great abyss that no one saw coming. She kept going, took a leap of faith and her patience paid off. Little Sister is now open on the East Side serving takeout pastries and coffee, and breakfast and lunch options, all with a Latin flair.

Back in January 2020, before COVID-19 hit, Pagán was still designing the storefront layout. The walls and tin ceiling had been painted vivid periwinkle and icy blue, and the counters were being built, but progress stalled when National Grid failed to upgrade the power. She faced delay after delay with the city of Providence, until the pandemic finally hit last March, forcing all restaurants to temporarily shut down and figure out a takeout plan. At that point, finishing the work seemed like a moot point.

“The pandemic started, and my contractor disappeared and wasn’t going to work, so we really had to make do,” says Pagán, who owns both Little Sister and Rebelle Artisan Bagels with her husband, Darcy Coleman. The couple took over the Little Sister project themselves with Pagán designing the space with tropical flourishes like guava pink paint accents, lots of live plants, rattan and dried flower arrangements, and they built benches and finished the painting, wallpapering and decorating together. It was nothing different from the do-it-yourself attitude picked up from Pagán’s first project, Rebelle, which opened in 2017. Pagán is an MIT-trained chemical engineer who is known for leaving a successful career to focus on her recipes for perfecting bagels, first in her own kitchen, then at pop-up locations, and finally her own storefront at 110 Doyle Avenue in Providence.

Opening Little Sister was supposed to be easier the second time around, until it wasn’t. After finalizing the design concept, menu planning came next. Pagán, prodded by friends, decided Little Sister would be a bakery and cafe reflecting her latin roots. “Friends said it should have some Puerto Rican influence, and I wasn’t convinced at first. I guess I have a complex,” Pagán says. “I grew up eating these fairly humble foods. To me, they are not exotic, but I had to look at it through an American lens.”

Putting creative twists and Latin flavor into everything from pastries to soups and sandwiches became her passion. They started out with pastry popups that served quesitos with puff pastry, sweet cheese and tropical fruit jam, breakfast egg and cheese and chicken empanadas, powdered sugar-dusted buns called mallorcas and buttery, flaky sweet and savory galettes with tropical fruit and blueberry jammy centers or caramelized onion, potato and bacon baked inside (nowadays the galette flavors rotate but always deliver similar flavor profiles).


Once Pagán was ready to open the shop last summer, she formed a small team, including her husband and bakers Alyssa Rosario and Lauren Burke. They chose to offer rice-based lunch specials and went hard on egg sammies with a spicy kick from chorizo or spicy sauce, and almost always laced them with avocado on brioche. Takeout specials vary day to day. On the afternoon I visited, I savored a rich roasted tomato, onion and garlic soup that was almost like a stew topped with crunchy fried onions, paired with an open-faced croqueta madame sandwich with a gooey poached egg, ham croquette, cheddar cheese and bechamel served with a side salad sprinkled with toasted hazelnuts and drizzled with a citrus-based dressing. “We’ve been mindful to add little touches to every dish to make it tropical, Latin and different,” Pagán says.

Guests should be prepared to leave with a box of pastries to savor that same day or the next morning. Pagán and Rosario are working together to perfect croissants in different flavors, including chocolate, as well as an almond sesame version that repurposes the solids from their horchata, a rich, creamy drink made from those ingredients plus cinnamon and other spices. The flavor is stuffed into the middle of the twenty-seven-layered laminated flaky and buttery pastries topped with toasted almond slices and sesame seeds.

Recently, Pagán returned to Puerto Rico for six weeks to visit family and gain inspiration. While there, she learned more about jam-making and pastry arts, and brought new skills back home. She also settled on Little Sister’s coffee brand, Gustos, which has its own Puerto Rican farms, roasters and cafes on the island, and she recruited a new cook, Emanuel Rivera, who moved here and is adding additional Latin touches to the kitchen. She’s taken these steps to bring more of her homeland to Providence. Even Spanish music pipes through the kitchen while the bakers are at work.

“I spent thirteen or fourteen years away from the island, and I went back for six weeks. That was the longest I have been there since college,” Pagán says. “I had an excuse to go down there and spend a lot of time and study the food, and get re-cultured so I could come back and bring home some of those ideas.”

Little Sister plans to sell its tropical fruit jams for retail, too. A shelf near the register in the storefront is already lined with papaya and guava jam and orange and passionfruit marmalade, and once they gain a variance from the health department, guests will be able to purchase them.

Eventually, Pagán hopes the jam might appear as an accoutrement on a Latin-themed charcuterie board with Spanish meats and cheeses, and she hopes wine, once they feel comfortable enough to open for indoor dining. “We might try to do BYOB in the future, but for now, we’re taking it slow,” she says.

Little Sister is open Friday through Sunday from 8 a.m. to 2 p.m. for takeout only, but they hope to gradually expand hours and open outdoor garden seating this spring. littlesisterpvd.com