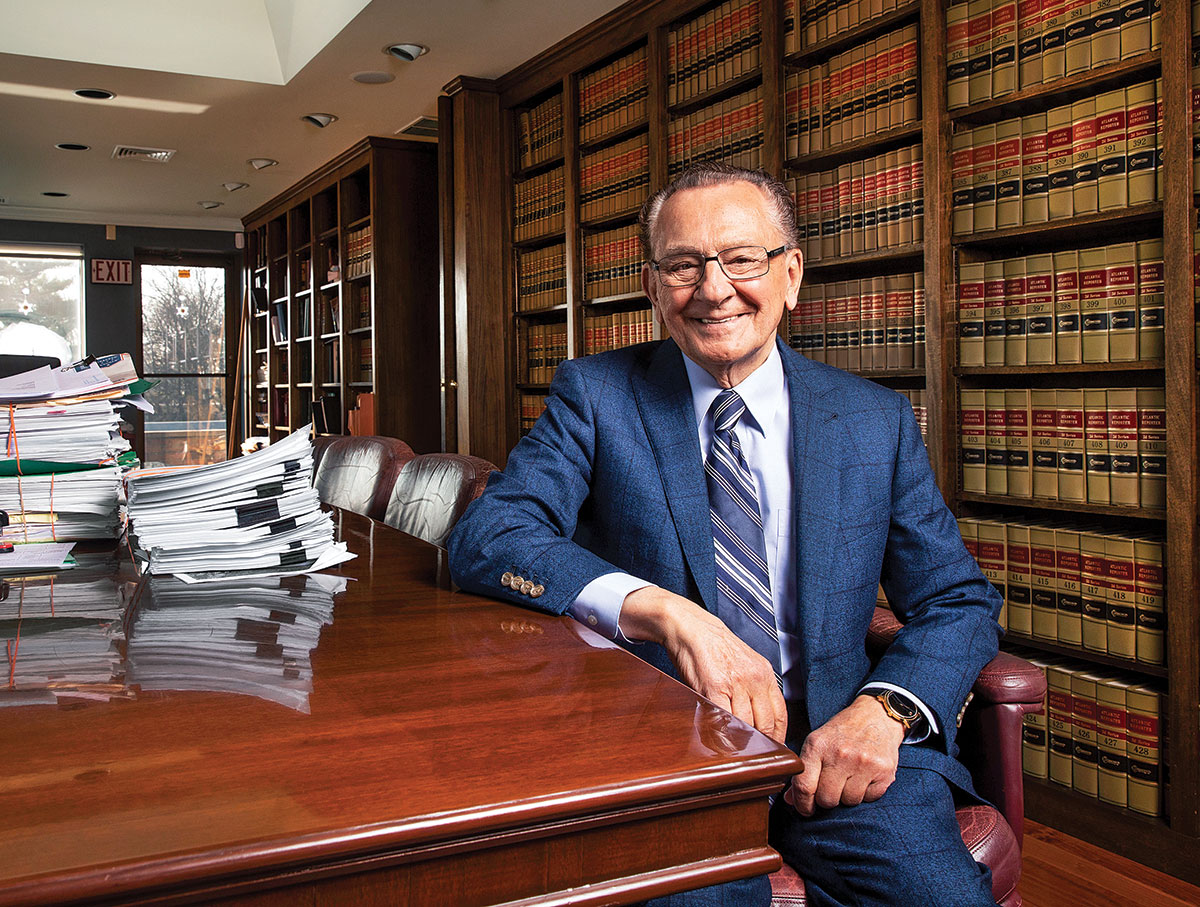 Caprio at his Providence office on Federal Hill. Photography by Alex Gagne.

While he taught school and attended law school, he also coached wrestling and was a member of the National Guard. He was inspired by John F. Kennedy’s call to public service and decided to run for Providence city councilor in 1962 at age twenty-four, up against the president of the city council of thirty-five years, and won.

“I was lucky that I had the health and the energy to do all of that at once,” Caprio says. “Now that I was in public life, I always kept one thing in mind: People would always need some assistance, and my father would always say the same thing: ‘Make sure you help people, and don’t forget where you came from.’ ”

Helping students pay for college has always been important to Caprio. He started several scholarship funds in his dad’s name at Providence College and Suffolk University Law School, as well as a smaller fund at Central High School.

He’s also been known to quietly help students in need under the radar, but one of the mothers that he helped is willing to talk.

Kathleen Gibbons calls Caprio Uncle Frank. She and Caprio met in church when he corrected her pronunciation of a word after she had finished lecturing that morning. He then began coaching her in speaking.

“I wish I had a picture of the moment when I asked him his last name,” says Gibbons, who had no idea his last name was Caprio, and that he was a judge.

In her office, Gibbons, a single mother, shares how she and her daughter, Alexandra, became family friends with the Caprios through church, spending holidays with them as a second family. Caprio watched her daughter grow up, wrote a college recommendation letter for her and guided her through the college application process. Alexandra was accepted to Salve Regina University. When Caprio later found out that Gibbons struggled to pay her daughter’s tuition, which prevented her from registering for classes one semester, he and his son, Frank Jr., quietly footed the bill until she graduated.

Caprio also helped Gibbons get a better paying job as the business manager at the Aurora Club. There, she manages reservations and events, and helps him commit simple acts of kindness for other people in need.

When one employee was homeless and sleeping in his car, Gibbons says Caprio got him an apartment and furnished it with a bed. Another young waitress with a young child was given various things to care for the baby, and Caprio made sure she regularly brought home food at night. As another busboy prepared for his first year of college, Caprio told Gibbons to take him shopping for a new laptop and other items he’d need for school.

“The great part of it is, he does it, but I get to do the legwork,” Gibbons says.

Why does he do it? “I know what it’s like,” he says. “I look at me through their eyes when they are talking to me.”

After graduation, Gibbons’s daughter Alexandra became a special needs teacher in Providence schools. In her first year on the job, the Department of Children, Youth and Families (DCYF) visited her classroom, and she ended up bringing home a student and his younger sister, who had been neglected by their parents. Gibbons obtained emergency certification to become their foster parent through DCYF, and Caprio became the kids’ godfather. The little girl, Jenna, now seven, and Noah, ten, call him Uncle Frank. He serves as a male influence in their lives, going to church every Sunday with them and breakfast afterward at Meldgie’s Diner or the Coast Guard House. He buys them everything from winter jackets and clothing to other things they might need.

In every interview, Caprio’s message is to pass along kindness and compassion to others. In a meeting in his chambers, he previously said: “My entire upbringing was to help people. I have been very fortunate that I have achieved a degree of success in life, but it’s not enough to climb the ladder of success,” he says, adding that his dad got to see him become a judge before he died in 1987. “The real goal is to leave the ladder down so others can follow.”

That message rings true with all five of his children, especially his daughter, Marissa, who has been known to read sad news stories and track down children involved to make their wishes come true. And it resonates with Gibbons, too.

“If it weren’t for his emotional support, I would not be able to be a foster parent, and I certainly would not be in the process of permanency with them,” Gibbons says. “I went from struggling as a single mom, counting pennies while grocery shopping, and he got me to the point where I could help someone else in need.”

Caprio has a soft spot for kids, especially those who come from a tough upbringing. That’s why he’s always calling children up to the bench in the courtroom to make sure they don’t get the wrong idea about the law.

“The courtroom can be a very intimidating experience,” he says. “Certainly, for the young, impressionable child, this might be his or her first and only experience.”

He describes the scene of the child walking into the oak-paneled courtroom with a podium, a judge walks out with a robe, a police officer is there with a gun and everyone has to stand because the judge walked in and now the judge calls court to order.

“In all probability, particularly for youngsters whose parents are suffering financial hardship or if it’s a single parent, they have heard conversations the night before of this terrible ordeal the parent is going to go through in court the following day, and they are full of fear,” Caprio says. “I have consciously said to myself, what if I berate that parent and either yell or become insulting, or give them a speech to point out the terrible example they are setting for the child? The child would be traumatized by that.”

Instead, he calls them up, asks their name and what they want to be when they grow up, then he encourages them to go to college and asks them what they had for breakfast that day. Then he turns the tables on the child and lets them decide the parent’s penalty. “I give them three or four choices, and it’s interesting how many of them, most of them, will indicate that I should fine their parent,” Caprio says with a laugh. “They don’t let them off scot-free.”

But if the child says they haven’t had breakfast, and Caprio chooses to dismiss or reduce any fines, sometimes he tells the parent to spend the money he or she would have paid on the fine to take the kid out to breakfast.

“When they leave that courtroom, they aren’t going to look at the judge and say all judges are mean, the system is against us, we don’t have a chance,” Caprio says. “I think it helps promote a better reputation for the judiciary system. At the same time, I’m doing what I think is right and just.”

Somewhere, Antonio Caprio is pushing his fruit cart and looking on with pride.