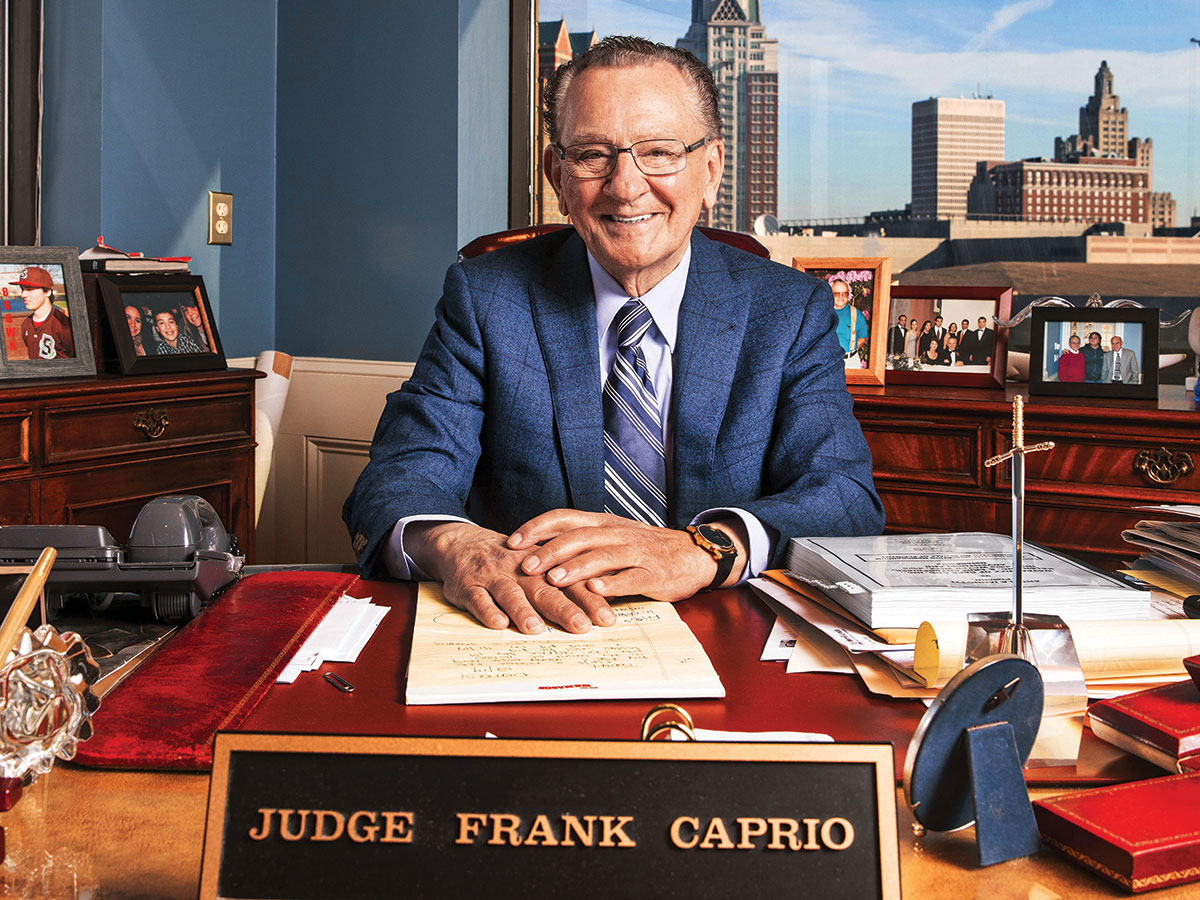 Caprio in his Providence office inside Caprio Law Firm on Federal Hill. Photography by Alex Gagne.

PROVIDENCE MUNICIPAL COURT CHIEF JUSTICE FRANK CAPRIO opens the passenger side back door of a metallic blue 2018 Lincoln Navigator parked on the side of the private Aurora Club Civic Association in Providence’s Federal Hill. It’s the place where he is permanent director and has been a member for more than fifty years, and he has lunch there on an almost daily basis. It’s past normal lunch hours on a crisp fall day, and Caprio is helped down from the back seat by the driver of the vehicle, the intimidating in size, but approachable in personality, retired Providence Police officer Simon Sarkisian, who now works for the “Caught in Providence” production team, Citylife Productions.

The side door opens to the Queen Anne-style William H. Walton House, built in 1889 and founded as an Italian-American businessmen’s club in 1932. Caprio strides into the dining room with handsome dark wood-carved columns and plaster filigree detailing. He’s greeted as “your honor,” by the host, and “Judge” by glad-handing acquaintances dressed in sport coats, collared shirts and ties. Handshakes are made. Small talk is exchanged. Caprio is helped with his coat in the foyer. He’s so revered, you almost expect people to bow. Three men mention his nationally syndicated television show, “Caught in Providence.” “Judge, I love your show,” says one. “Congrats Judge,” says another. Caprio thanks them for watching, and heads past the white tablecloths toward the stairs for the more casual upstairs dining room. “For the most part, I am working every day so this is like coming home for me,” Caprio says, wearing his thin-rimmed spectacles, a dark blue checked suit with a white dress shirt and bold red necktie. Caprio modernized the Aurora Club by admitting the first woman member and made it more inclusive with diverse religions and ethnicities represented. There are now more than forty active female members.

Caprio, eighty-two, has been a municipal court judge in Providence for thirty-five years. Reelected six times, he earned another four-year term as chief judge in January. He’s also been the chairman of the Rhode Island Board of Governors for Higher Education, a lawyer with his own Caprio Law Firm alongside his sons Frank Jr. and David Caprio, a Providence city councilor, a history and civics teacher at Hope High School, a high school wrestling coach and a member of the National Guard. He’s a devoted husband of fifty-four years to Joyce Caprio, father to five children — Frank Jr., David, Marissa, John and Paul — grandfather to seven and great-grandfather to two as well as godfather to two children who live in Narragansett. He’s also known as a real estate investor and restaurant co-owner of the Coast Guard House.

Caprio became an international celebrity after videos from his traffic court cases went viral on social media, catapulting him into worldwide fame, earning more than 1.7 billion views on the Internet. He’s known as a kind and compassionate judge, who takes all circumstances into consideration when determining the outcome of cases. His younger brother by thirteen years, Joe, started filming twenty-five years ago when he gained time on local access television. Caprio’s wife, Joyce, suggested they use the time to film her husband in court. “I didn’t like the idea actually, but of course, when my wife makes a suggestion, I usually don’t win that battle,” Caprio says with a laugh over Italian wedding soup with the meatballs removed as requested, and broiled scrod with a side of butternut squash, plus coffee with milk and no sugar. “I agreed we would try it and see if it was something that worked. And there was an overwhelmingly positive response.”

The court cases aired on WLNE-TV, with a stint on ABC 6 at the turn of the century that drew more popularity. But it was the more recent posting of videos to social media, like Facebook and YouTube, by Sociable’s John Methia, who is also Citylife Production’s senior producer, that earned Caprio worldwide fame. The compassion of Caprio is also what captured the attention of national syndicator, Debmar-Mercury.

In 2017, Caprio got “the magic phone call” from Debmar-Mercury, which set in motion the national spotlight on “Caught in Providence.” It premiered this past September with 130 episodes that run twice daily during weekdays on Fox, airing in 90 percent of the country, including the largest markets in New York, Los Angeles and Chicago, and it’s been renewed for a second season.

“It’s surreal,” says executive producer Joe Caprio. “I am not a kid, so for this to happen at this stage of my life, god is good…I kept it real all these years. What is there is what we saw. It’s all about a good person helping people.”

Debmar-Mercury supervising producer and show runner Brad Johnson watched what was happening online with Caprio’s viral videos. They gained hundreds of millions of views for everything from a clip of a woman with tickets who broke down about her son’s murder to another case in which a woman got a ticket for parking a minute too early in a spot that didn’t allow it until 10 a.m. The judge is also known for bringing kids up to the bench to decide their parent’s guilt or innocence (mostly guilt).

“This is real. This isn’t ‘Judge Judy,’ ” says Johnson in the courtroom after the day’s proceedings have finished. He keeps track of every case, noting who doesn’t want to be on camera, and which ones should be included in an episode by rating them on how interesting they are. “It’s a valentine to the city of Providence, because it shows this is a place where you can come and be treated fairly and the systems of government are fair and you have a voice. It doesn’t matter where you come from or what you’ve done. It’s a clean slate when you walk in.”

Most courtroom TV shows are filmed in a TV studio, and everyone on set knows what’s going to happen before it happens. The “actors,” or defendants and plaintiffs, will be prepped, the judge will be briefed and often legal cases will financially be taken care of as part of an agreement. But the real-life drama that unfolds on “Caught in Providence” is in the moment. The filming crew never knows what might happen, nor does the judge get compensated for the show.

“All the segments of court in Providence are actual court proceedings, so it’s not a program and it’s not a court show, it’s actual real proceedings that are being televised,” says Caprio. “We show a slice of life of Rhode Island that is very interesting, and it reflects the same issues people are experiencing nationwide.”

The judge might be known for cutting people some slack, but for good reason. “I try to look at the world through the eyes of the person before me. You know that if you don’t remove a boot on their car, that their car will be towed, and eventually they will lose their car because they can’t afford the tickets,” Caprio says. “Or if it was someone who I insisted pay their tickets or have their license suspended, they might not be able to feed their kids that night.”

The judge’s message resonates internationally in a world that isn’t always fair, and he gets letters from all over the world praising his motives. “It’s a very divisive angry country. I thought the timing of this seemed to be perfect in that I don’t think you can put a political slant to what he does. He’s not left, he’s not right; he’s compassion, kindness and common sense,” says supervising producer Johnson. “This isn’t an angry judge show. We’ve got enough of those.”

On the first day of October, Hollywood has arrived at Providence Municipal Court. But not with the dramatic and imposing lights, camera, action one might expect. Just before 8 a.m. on this lethargic Monday morning, six stealth video cameras are programmed and ready to roll at different angles in the courtroom as tired and nervous and overconfident defendants arrive, sliding into wooden benches, waiting to contest parking tickets, speeding offenses and running red lights. They are prepared to plead their cases in hopes of dismissal or reduced fines for single, or sometimes multiple, violations.

A young Frank Caprio, far right, on his parents’ anniversary. Ten-year-old Frank, with older brother Anthony, delivering milk. Caprio celebrating his Providence City Council victory with his father (in glasses) and supporters in 1962. Caprio received the Man of the Year Award in 1998 at an event with his family, from left, Frank T., Gabriella and
Ashley Caprio (Frank T.’s wife and daughter), John Caprio, Marissa Caprio Pesce, Paul Caprio and David Caprio. Bottom: Joyce and Frank Caprio.

The camera crew of four men, dressed mostly in black — but Caprio’s brother, executive producer, Joe Caprio, in blue — keeps it light-hearted with the public before court is called to order. Joe Caprio tries to get people to loosen up by cracking jokes: “Relax. You look like you’re here for a murder trial,” he often says with a laugh.

Once Caprio emerges from his chambers — ear piece in place and dressed in his flowing black robe over a shirt and tie — he walks past a sign posted on the office fridge meant to deter lunchtime thieves that says, “Smile, you’re on camera!” then opens the side door to the courtroom and peeks in. Inspector Robert “Ziggy” Quinn’s assertive voice booms, “All rise.” Twenty-two people before him — a melting pot of cultures, ages and classes, from immigrants who don’t speak English to a well-off student from Brown University — rise to their feet.

“Court is now in session. The honorable Frank Caprio presiding. Be seated,” Quinn says with no-nonsense demeanor, taking his large, domineering stance — which alternates with quick-witted standup comic sidekick — on the floor next to the stand, while Caprio sits high, overlooking the courtroom.

Caprio smiles and attempts to put the people before him at ease. “Good morning ladies and gentlemen. Most of you have made traffic offenses,” he says in a jovial, grandfatherly way. “If I call your name, please line up on that side of the courtroom. If there is anything you wish to tell me that you think will help you, feel free to do that when you get toward the microphone. Don’t be nervous. We’re not here to intimidate you.”

And then the clincher: “You probably notice that there are cameras in the courtroom.” A camera to the judge’s left focuses on the motorist, and there’s a GoPro directly behind him that captures a wide angle, and one in the back that does the same.

Another camera in the back focuses on the judge, and another on the side documents Inspector Quinn and the rest of the courtroom inhabitants. There’s also an audio board to manage the sound, manned by Simon Sarkisian.

Joe Caprio leads the production team through his film studio, Citylife Productions, located in a slick, teched-out office on the ground floor of Caprio Law Firm at 1 Center Place in Providence. While his staff works in the building, he does a lot of his own video work from home at all hours. All managing and editing is done digitally and paper is considered contraband.