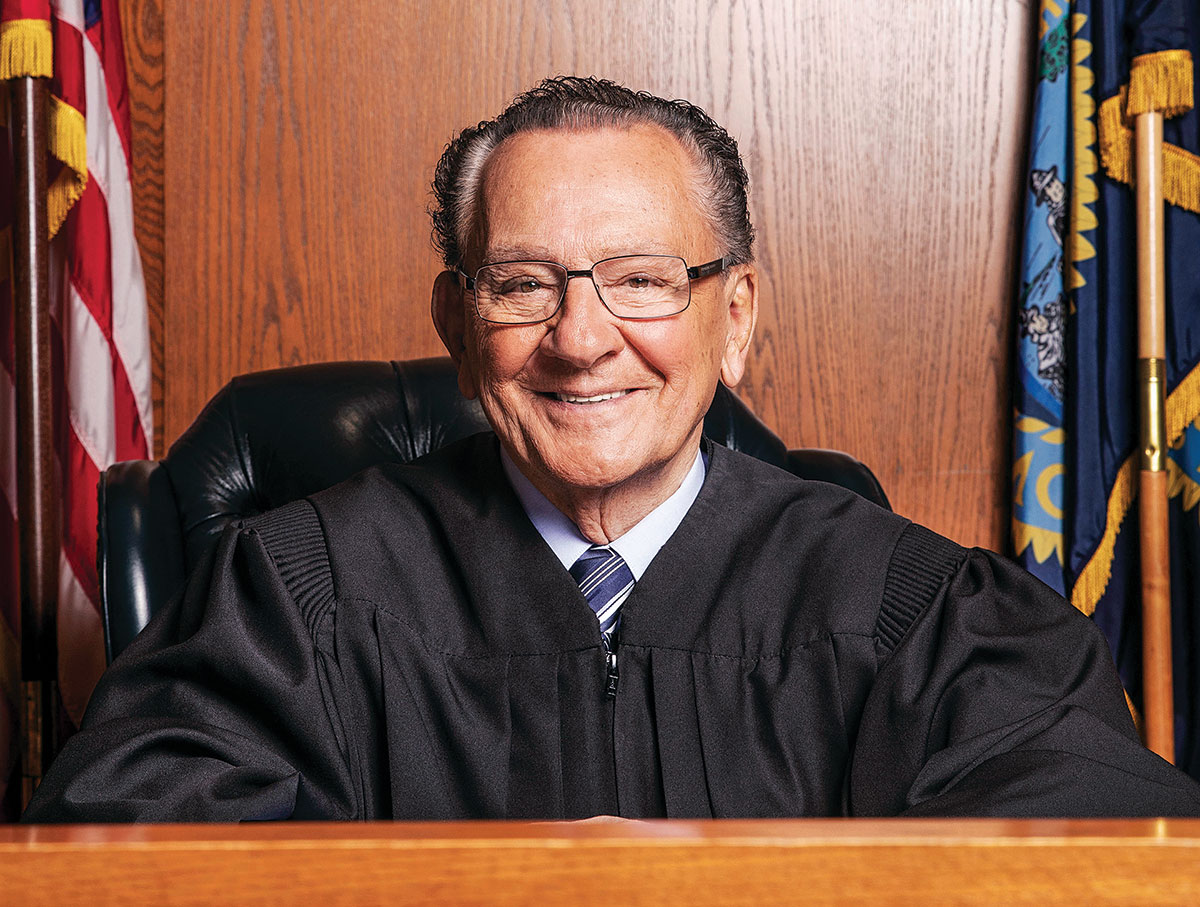 The judge in the courtroom in Providence. Photography by Alex Gagne.

While the cameras are always there, Caprio makes sure the people in the courtroom are aware of what could happen. In fact, some of the best cases might not even make it to “Caught in Providence.” If they don’t want their case to be used, it won’t, even if they change their mind after it’s already been filmed.

“It’s their right and we don’t try to deny their rights. We don’t try to bully anyone,” says Inspector Quinn. “It’s your choice. Some people are willing to share, which is nice, and for other people, it’s a little personal and they want to keep it to themselves or the small, crowded courtroom. We respect everyone’s wishes here.”

The camera crew gears up — like hunters awaiting the sight of a doe-eyed deer — to capture what could be their next big “Caught in Providence” viral video moment.

The second woman to approach the bench seems as though she might be playing it up for the camera as she explains how she ran a red light on Charles Street in Providence because there was a panhandler to her left at the median in the road. She claims he was ominously coming toward her driver’s side window as she made the decision to run the light.

“My window was down, and I got scared, so I just went,” she says. “You can see him in the picture that they mailed to me but I had it in an envelope with all my important stuff in it and my ex-boyfriend took it.”

It turns out she also has another traffic violation and parking ticket that she failed to pay, but she says her ex-boyfriend said he paid those, and it turns out he didn’t.

“Do you still speak to your ex-boyfriend?” Caprio says with concern.

“Do you want me to send Inspector Quinn out to get him?” Caprio says with a laugh.

She laughs and says he still calls her, but she puts her phone on block. She’s still wishing she had that picture of the panhandler to prove her case.

“Well today is your lucky day, because not only do we have the picture, we have a film and we are going to show you,” Caprio says.

There’s a large video screen in the courtroom where they bring up the clip of the moment when she runs the light. Sure enough, there’s a man looming next to her in the left-hand lane.

“He’s there every day, on that same corner. I travel that way every day,” she says. “Every day I am scared to stop.”

Inspector Quinn says, “It doesn’t appear that he is approaching the vehicle but we are aware of that situation.”

Caprio mulls over his decision. “We have had a number of people come in and we actually adopted a policy. If there is a reasonable apprehension or fear, the criteria is to demonstrate that. My judgement is, we’re going to dismiss it.”

While she got off for the red light, she decides to return to court to defend a separate offense. The woman thanks the judge and later informs the cameramen that she doesn’t want to appear on television, so it’s on to the next cases.

Next up, there’s a grandmother who missed a court date for contesting an environmental fine because she was watching her grandchildren on the Jewish holiday. Her failure to appear in court increased the fine from $100 to $300 for having a boat stored in her front yard, which was scheduled for pickup by a removal company that failed to do so. She pulled on the judge’s heartstrings with her story, which was sent in a letter requesting a new court date.

Providence Municipal Court administrator Patrick Butler reads an excerpt from the letter: “Your honor, I’d like to read the last paragraph of the letter she wrote,” he says. “‘I would like a new court date because I am afraid of arrest.’”

“I am just trying to get over the story that she was storing the S.S. Minnow in her yard,” says Quinn. On the recommendation of Butler, Caprio dismisses the charge and the woman thanks them both.

The morning continues with almost two dozen cases including an immigrant who worked with a translator to explain why he only paid partial amounts for tickets, which Caprio commends him for because he made the effort. Then there’s a Brown University student who contests a campus parking ticket because he already paid $800 for a parking pass.

Caprio doesn’t always go easy. He can usually tell if someone is lying, and will call them out for it, especially if it’s a situation that could potentially put others in danger. But he gives each person a chance to tell his or her side to the story, and then decides if he believes it. Toward the end of the morning, there’s a young man dressed in a track suit with messy hair, bleary-eyed from lack of sleep. He says he works nights and sleeps during the day and claims he didn’t know about a noontime red light violation and three overnight parking tickets. He watches the judge’s video showing the red light violation, and confirms it’s his car. Then he says the offenses must have been committed by his girlfriend, who drives his car.

“Let’s assume you check the date, and you find out she was driving the car, what are you going to do? You going to ask her for the money?” Caprio says.

“Clearly he was sound asleep,” says Quinn with a chuckle. “He’s half-asleep now. He wakes up at the crack of noon.”

“This is an expensive girlfriend,” says Caprio with a smirk, deciding to dismiss the late penalties on the three parking tickets, so he only has to pay $20 each, but charges $85 for running the red light. “I see a breakup in order.”

Caprio knew he would be a lawyer when he was ten years old. He grew up as the middle of three brothers with a stay-at-home mother, Filomena, and hard-working father, Antonio Caprio, who was a fruit peddler on Federal Hill, and later, a milkman. His mother was born in Providence, one of eight children of parents from Naples, and his father immigrated to Providence from Teano, Italy, one of ten children. The family didn’t have much money and Caprio remembers one particularly cold day in their three-story, six-unit tenement on Federal Hill. They lived in a cold water flat, with no hot water, so they’d have to go to the bathhouse down the street in order to take a hot shower. On this day, it was so cold the family gathered around the stove to stay warm.

“My father at that point looked at me and said, ‘Someday, you are going to be a lawyer,’ ”

Caprio remembers. “He said, ‘You’re a good talker, and you can help people. But remember one thing: You cannot charge poor people.’ He said, ‘You’ll make it up with the rich people.’ ”

It was basically a done deal. “After my father told me I was going to be a lawyer, I never wanted to be anything else,” Caprio says.

After graduating as an all-state wrestler who was voted “Most Energetic” by his Central High School class, Caprio worked three jobs to pay off his tuition at Providence College. “I washed dishes, I polished cars and I’d get up at two o’clock in the morning on Sundays and work at the Journal subbing, which was what they called putting the paper back together,” he says. With those three jobs, he was able to pay his way, but it was never easy.

Next up was law school, but having enough money for school beyond college proved to be one of Caprio’s biggest challenges. He was accepted at Boston University, but didn’t have the money to go, and opted to attend Suffolk University Law School in Boston, but still couldn’t come up with tuition. There were no scholarships or college loans back then. He remembers the moment when he told his mother that he was going to put off law school to work.

“I go home for lunch and my mom is alone. I don’t want her to feel that she’s not being supportive or that it’s her fault,” he says. He tells her he’s going to take some time off after graduation and teach school. “She looked at me and said, ‘It’s the money.’ I said ‘No.’ I lied. She said, ‘I know it’s the money.’

His mother went into her bedroom and Caprio could hear her wrestle with the drawers of her bureau. She returned with three bank books filled with weekly deposits of tiny amounts from 50 cents to $5.

“She said, ‘Dad never made much money, but never a week went by that I didn’t put some money away.’ She said, ‘Take these and go to school,’ ” he says, speaking slowly and pausing at several points, biting back emotion. “She had given me everything she had saved over her entire life.”

This was a woman, he says, who couldn’t afford prenatal care so she went to the public clinic, she never bought herself a new dress unless it was a special occasion and she never ate in a restaurant.

The son told his mother he could never take that money, but he promised her he would go to law school at night and try to get a teaching job to pay his own way. Right out of college, he got a job teaching American history and civics at Hope High School, and when he saved up enough money from his first year of teaching, he began attending law school at Suffolk at night.