Home Activity: Participate in a Virtual Painting Party at Home 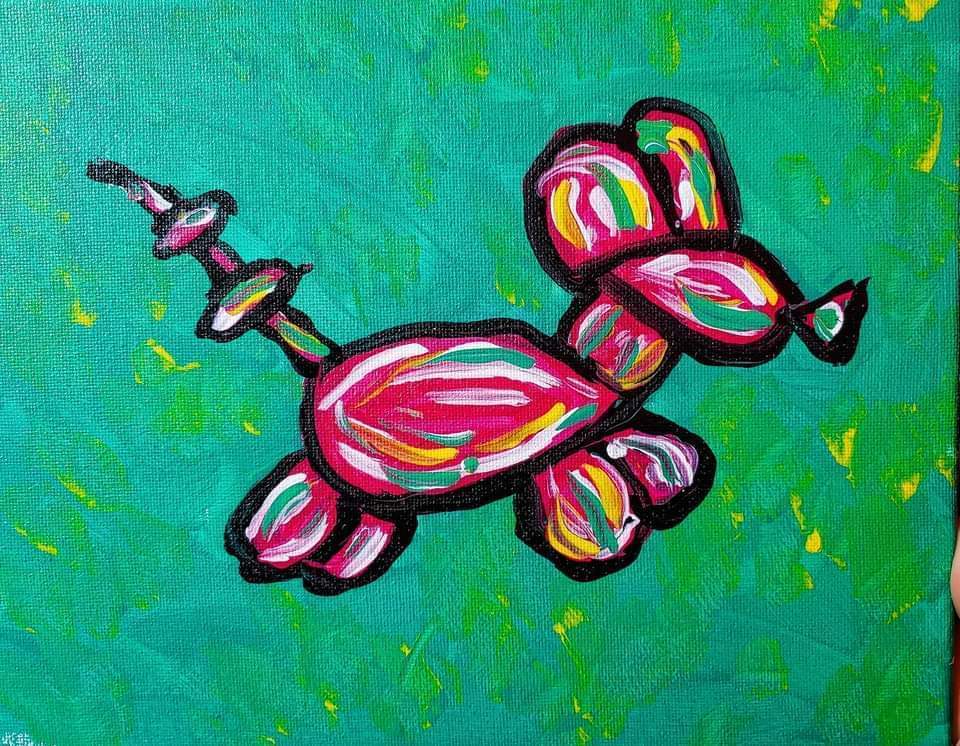 When COVID-19 hit Rhode Island, local business owners had to get creative to stay afloat. That’s exactly what Rebecca Killian, owner of Mermaid Masterpieces, did with her step-by-step painting party service, which turned into a virtual paint party business. Based in Newport,  Killian’s Mermaid Masterpieces has been making novice painters feel confident in their artwork for five and a half years. The business has won both Rhode Island Monthly‘s Best of Rhode Island and Newport Life‘s Best of Newport awards since its conception.

“I [used to] come to your home or business, set up canvases, paints, brushes, cups of water, then guide everyone step-by-step on how to paint one of my original paintings,” says Killian. Of course, the situation has changed now, and the events must be hosted virtually. “Normally, I do kids’ birthdays, after-school programs, library programs, university and boarding school events, church socials, fundraisers, bachelorette parties, Brownies/ Boy Scout parties… You name it, I do it,” she says. Participants have fun no matter how their artwork comes out, and there is no right or wrong way to paint.

Killian’s quick thinking to turn her Mermaid Masterpieces service into a Facebook Live free virtual painting party led to a large increase in Facebook followers. It had taken her five years to gather her first 3,000 followers, and within the three months she announced the free virtual painting services, she ended up with a following of more than 7,000 people.

Killian was only planning on hosting the virtual parties for one week, however, she ended up doing them for more than three months, every day, even twice a day at times. Her virtual step-by-step painting service had gotten so popular within those first few months that the Michael’s craft store located in Middletown sold out of painting supplies the weekend she had announced the free parties. “Their projected sales doubled because of that surge, in a time where so many businesses were losing money,” she says. “They remained sold out of those items well until the summer because any time they stocked up, people would buy them to paint with me,” she says.

Starting October 5, Mermaid Masterpieces will again offer free Facebook Live painting events for kids after school a few times a week at 5 p.m. Virtual adult parties will also take place on some Friday nights. She also offers weekly virtual lessons and parties for a cost for kids, too.

The Mermaid Masterpieces owner is aware that everyone is trying to get by during this time, and she aims to make their days a little brighter, all while helping kids in the best way. “At a time of so much change and such uncertainty, concentrating on boosting children’s confidence might be one of the most important things we do for them,” says Killian. “If you park the kids in front of my paint parties with painting supplies, I’ll pump them up with confidence, make them laugh, fill them with joy, encourage good deeds and they will hopefully feel less scared.” One of Killian’s top priorities is making sure the kids feel inspired by the incredible work they’re doing, which encourages higher self-esteem in the future.

Killian’s most notable highlight for her business was working with Budsies, a company that creates high-quality plush toys from any drawing, picture or character sent to them. “I was invited by the huge company in Florida that was on ‘Shark Tank’ called Budsies to throw a weekly paint party on their social media of 125,000 people. We have the same demographic; I teach kids to paint and they take kids’ drawings and turn them into stuffed animals. It was very cool!” Killian says.

Killian hopes to expand her Mermaid Masterpieces service and host virtual parties in senior living facilities and nursing homes, shelters, hospitals; essentially anywhere people would like to get artsy with a canvas and paintbrush. “Once people know about it, the more people can enjoy it,” she says.

Spreading positivity, kindness and passion for art is the main reason Killian founded her business, especially since it’s enjoyable for every demographic. She wants everyone to be included without the cost being an issue. “Kids love it because it’s a healthy escape, parents love it because it gives them time to breathe! Plus it’s free; I do put out a tip jar virtually to help me get by,” she says. “I would rather make less money by doing this free so countless kids… whose parents may not be able to afford an online class [can join in]. Every kid deserves this, it’s so important.”

If you need an idea for a birthday party, university party, girls/guys night in, team building or any sort of event, contact Rebecca Killian at 401-297-8274.

Have a paintbrush and paints ready and join a Mermaid Masterpieces virtual painting event soon. Visit the Facebook page at facebook.com/mermaidmasterpieces.