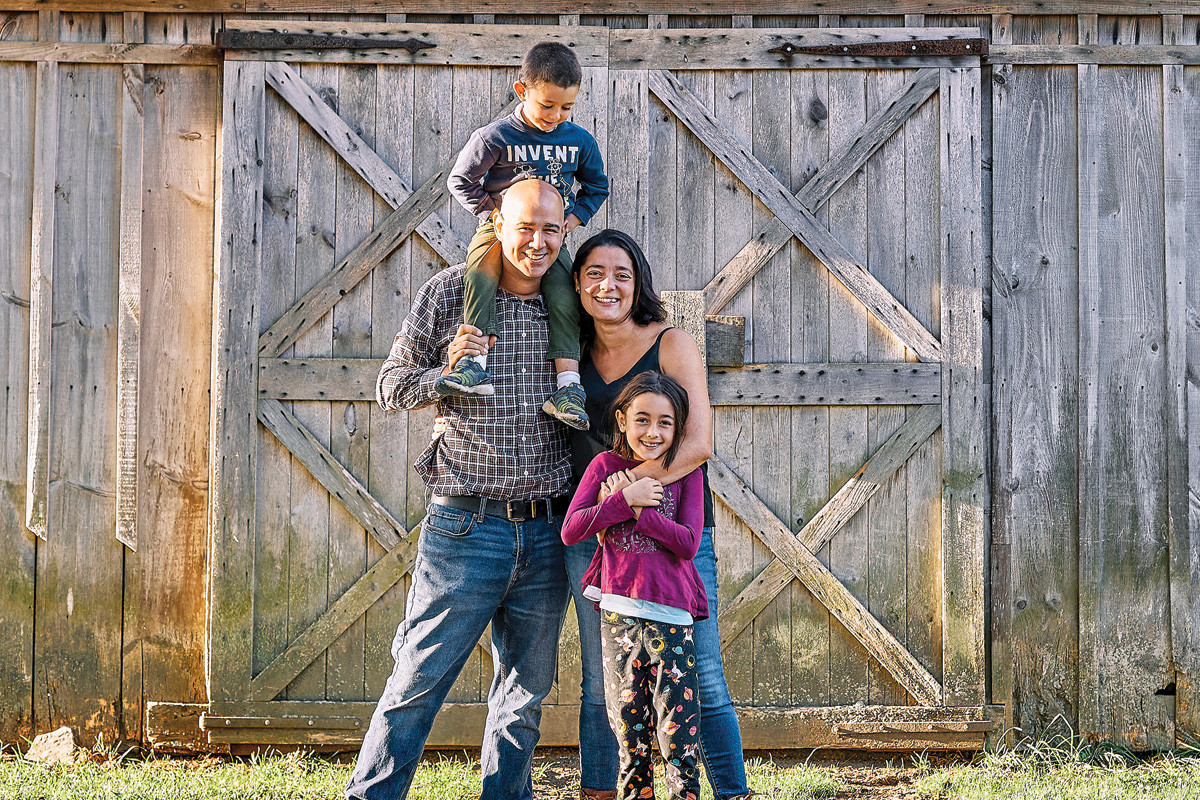 Ester and Joel Bishop of Gnarly Vines Farm with their children at Coggeshall Farm in Bristol. Photography by Angel Tucker.

It was a rough start for the bishop family to pack up everything from their former life in Woburn, Massachusetts, and buy a rural farm in Tiverton. There was a lot of time and labor that went into getting the huge greenhouse ready and clearing the property of invasives and then deciding on what type of farm they wanted to be.

Ultimately, they steered Gnarly Vines Farm in the direction of providing locally raised meat, poultry and eggs. It turned out to be a great decision. As grocery stores continue to sell out of pork and chicken products, the coronavirus pandemic created a huge demand for locally raised meat from area farms.

“Yes, it’s true,” says Ester Bishop, co-owner of Gnarly Vines Farm with her husband, Joel Bishop. “We had been wholesaling to local restaurants. When they closed, I didn’t know what was going to happen. I had a bunch of animals ready for processing and nobody to buy them. Thank goodness Farm Fresh Rhode Island’s Market Mobile opened up for retail sales to the public. The community came to rescue us. We are selling lots of meat and eggs. We are struggling to find a place to process our large animals because they are packed.”

The family is working on increasing production while figuring out how to complete processing faster as systems are backed up.

“In New England, there are not a lot of slaughterhouses, and they certainly have not been able to keep up with the demand that happened over the past several months,” says Ken Ayars. “That’s an area we have to work on.”
But demand for locally raised meat, rather than factory farmed, is a good problem to have. It validated the Bishops’ decision to start their farm, even though getting it off the ground involved many struggles.

After being married for ten years, Ester and Joel left suburban sprawl for farm life. It was time to start a family and follow a simpler way of life. They put their Woburn, Massachusetts, home on the market and quickly found the beautiful sixteen-acre farm with a five-bedroom house and two large greenhouses in Tiverton for about the same cost as their former home. Ester was raised in Sao Paolo, Brazil, with parents who had grown up on a farm, and her husband, Joel, grew up on a New Hampshire farm, so they wanted the rural experience for their own children.

“We got married, had a lot of fun as DINKs (double-income, no kids), and then ten years into our marriage, we decided to start a family,” Ester Bishop says. “We began paying more attention to what we eat.”

They learned about pesticide use and GMOs that are in some foods, and decided to start their own homestead farm to grow and raise their own food. It was hard for them to get an affordable mortgage on the Tiverton property because there is a huge commercial greenhouse on the grounds, and it was a non-conforming property. “No one wanted to give us the mortgage unless we took down the greenhouse,” Ester says. “We didn’t want to do that, so after many phone calls and weeks of researching, we finally found the bank that would give us the loan.”

When they bought the farm, Joel was commuting to Boston for a job in IT, while Ester decided to leave her job as a medical interpreter. At that point, they needed to figure out how to make the greenhouse viable so they could afford the rising mortgage payments. At first, they thought they would grow hops and start a brewery. But the town of Tiverton would not allow it due to zoning, so they had to come up with an alternative plan. 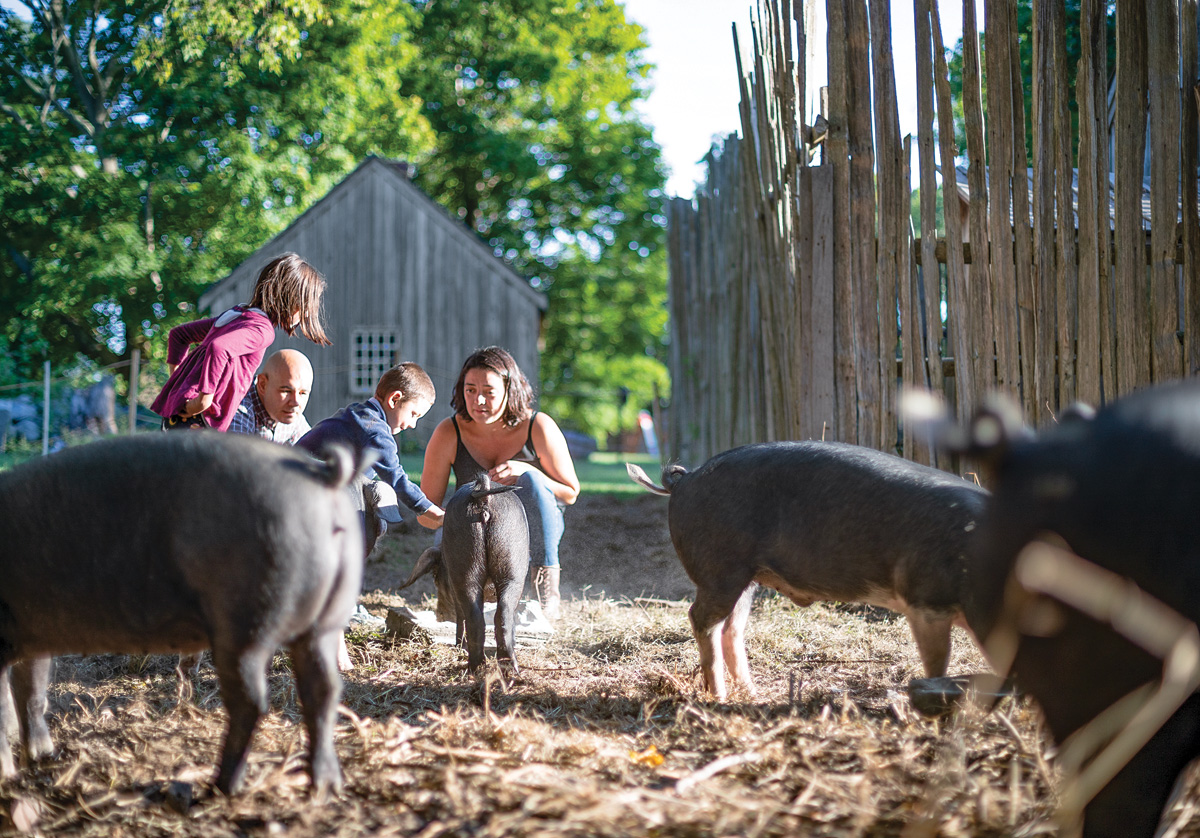 They started a garden to grow their own food, then bought laying chickens and meat birds, and goats for milk. Joel continued to drive to Boston for work while Ester stayed home with the kids. They put all of their money into growing the farm, while working with the Natural Resource Conservation Service to clear the invasive “gnarly vines” on the property to make it more productive. They also received a LASA grant from the Rhode Island Department of Environmental Management. Once they started to grow the farm and get more animals for meat, they realized they needed more land for the animals to roam. Fortunately, they were able to team up with the Coggeshall Farm Museum in Bristol to give their livestock access to more land.

“They had forty-eight acres of land with no farm activity and we had all this farm activity and we needed more land,” says Ester. “We brought our chickens and turkeys there as we wanted them pasture-raised, and it was a success. Now, we’ve loaned them six pigs that are actively clearing the grounds by eating roots and plants.”

The Bishops used their LASA grant to purchase a mobile processing unit and they hope to install a well on their Tiverton property so they can slaughter the chickens there instead of outsourcing it. “We had some roadblocks, but it looks like it’s going forward,” Ester says.

They have a small storefront at the Tiverton farmstead for selling the meat and eggs, and they are thrilled that the partnership with the Coggeshall Farm Museum has helped them take their business to the next level. Gnarly Vines Farm is planning to host some workshops at Coggeshall Farm so people can learn about the benefits of locally raised meat and how to use whole animals in cooking to reduce waste.

“That initial desire to feed our family healthy foods in a healthy environment is going very well,” Ester says. “Our kids now know how to choose healthy foods. They know about life, they know about death and where their food comes from.” The Bishops hope the desire for locally raised meat and eggs continues to soar, although the increased demand came out of a crisis. They’ve also added local seafood purveyors including dry scallops from Captain’s Finest Scallops and Sakonnet Lobsters to their online ordering system for pickup and delivery, so customers can access seafood at the same time that they order meat and eggs. They’ve started a food security CSA so families can pre-order how much meat, eggs and seafood they might need throughout the year and the farm can then raise it to order and provide it at a discount. The family has also begun to accept SNAP for their products.

“We are nervous, and we all hope our communities will stick with us after this is over,” Ester says. “They took care of us and we will surely take care of them. We are increasing production in the hope that we can supply the demand.”

Pick up pre-ordered products at Gnarly Vines Farm on Saturdays from 8 a.m. to noon or order home delivery anywhere in Rhode Island and areas in Massachusetts directly through the farm or through Farm Fresh RI’s Market Mobile (Providence, Pawtucket and East Bay). Gnarly Vines products are also available at the Tiverton Farmers Market at Sandywoods at 43 Muse Way in Tiverton on Tuesdays from 2 to 6 p.m.