Jules Opton-Himmel and team ran an oyster farm, launched a home delivery shellfish business and opened the Walrus and Carpenter Oyster Bar and Farmstand in the middle of a pandemic.

Not every farmer would have the drive and skills to do all of this at the same time, but when the oyster farmer saw his sales to restaurants plummet during the COVID-19 shutdown, he knew he had to do something to move his product quickly. In March and April, the bivalves were rapidly growing inside cages below the surface in Ninigret Pond in Charlestown and Dutch Harbor in Jamestown, and if he didn’t clear them out, there’d be no room for the next batch of seed to grow the next generation of oysters.

During the beginning of the COVID-19 crisis early this spring, many farms found themselves pivoting business models out of necessity. As restaurant closures halted distribution from greenhouses, fields and the bay to dining room tables, purveyors had to find new ways to sell produce and proteins to consumers at home. Many farms created websites where customers could order products directly and pick them up curbside or have food delivered, and others teamed up with Farm Fresh Rhode Island’s Market Mobile and the WhatsGood local food delivery app to offer goods dropped directly on customers’ doorsteps.

Farms like Walrus and Carpenter, Deep Roots, Gnarly Vines, Pat’s Pastured and Brandon Family Farm all created their own retail websites, and some of them teamed up with other food producers, fishers, makers and farms to expand available inventory. Many of these savvy farmers learned these adaptable tech skills through networking with other emerging and established farmers in Southeastern New England.

“Those who were able to go down that path, benefited from it,” says Ken Ayars, chief of the Department of Agriculture at the Rhode Island Department of Environmental Management. “I’ve heard from talking to many farmers and fishers that some of them did better than they have ever done this year by using that technology.” 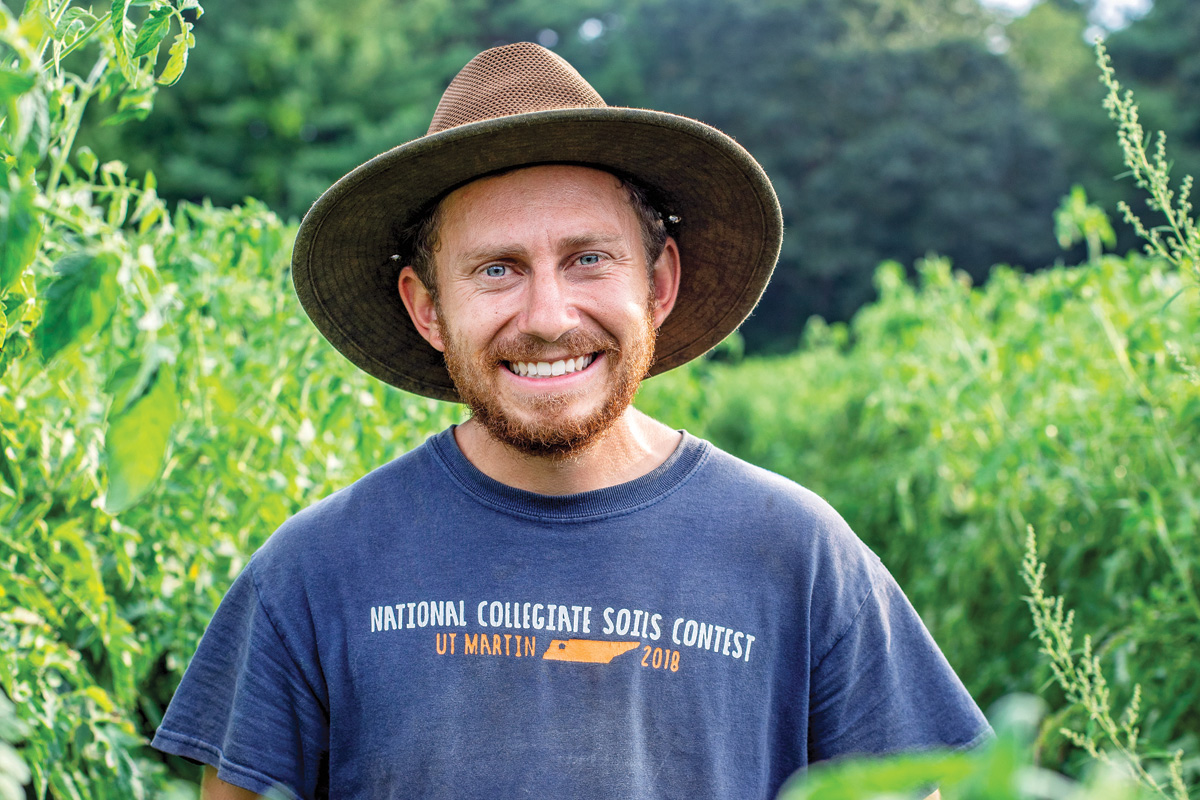 Unfortunately, not every farmer has the technical skills to launch digital initiatives, delivery and pickup. But the convenience is here to stay now that COVID-19 made it crucial for sales. “There was a desire for avoiding congregate shopping environments, and a desire for direct connectivity to local producers. It’s all the more reason to keep supporting that movement, and all that’s necessary to achieve it, whether that’s through websites, more options for taking payments and home delivery,” Ayars says. “I think that’s going to be a permanent part of our infrastructure going forward.”

Back before COVID-19 hit, the Young Farmer Network of Southeastern New England, which includes beginning farmers from Rhode Island, Massachusetts and Connecticut, organized a night for young farmers and their supporters called “Landing on the Right Acre: Storytelling for and by Farmers.” The farmers recounted their individual startup stories on stage and shared best practices in an effort to build a community of local rising farmers. The event was a partnership with Land for Good, which helps to connect land-seekers with fertile acreage for farming.

The group gathered inside Machines with Magnets in Pawtucket, a trendy bar, contemporary art gallery and performance space with food provided by Ben Sukle of Birch and Oberlin and oysters by Walrus and Carpenter. Instead of overalls embedded with dirt, they wore everything from bright rainbow-colored sweaters and funky scarves to fashionable dresses and T-shirts with quirky sayings. The farmers were there to share stories about the challenges of gaining land access for agricultural use in Rhode Island.

The Young Farmer Network provides opportunities for education and advocacy and strengthens the social and professional networks among farmers from all backgrounds and ages. The group also organizes Young Farmer Nights, which, pre-pandemic, included tours of local farms with potluck suppers and community-building camaraderie, often set around a campfire.

For this event, farmer John Kenny of Big Train Farm kicked things off in black-rimmed glasses and skinny jeans by explaining how Rhode Island is one of the most densely populated states in the nation, while also having the most expensive farm real estate in the country. “The average age for the American farmer is in the high-fifties or low-sixties and Rhode Islanders are right on that median, which is odd, considering you look around the room and you see a lot of young faces,” Kenny says. “So with the high value placed on farmland, we have an aging population of farmers sitting on goldmines.”

The challenge is connecting the next generation to that farmland, when many aging farmers might choose to sell their acreage for development, and young farmers cannot afford to purchase land. Land for Good helps connect beginning and established farmers with access by ensuring farmland stays that way. And these emerging farmers are savvy enough to tap into technology to sell their products, which could keep farming viable well into the future.
We adapted some of the tales we heard at “Landing on the Right Acre” to find out how the farmers are faring during the COVID-19 crisis. Here are their stories: 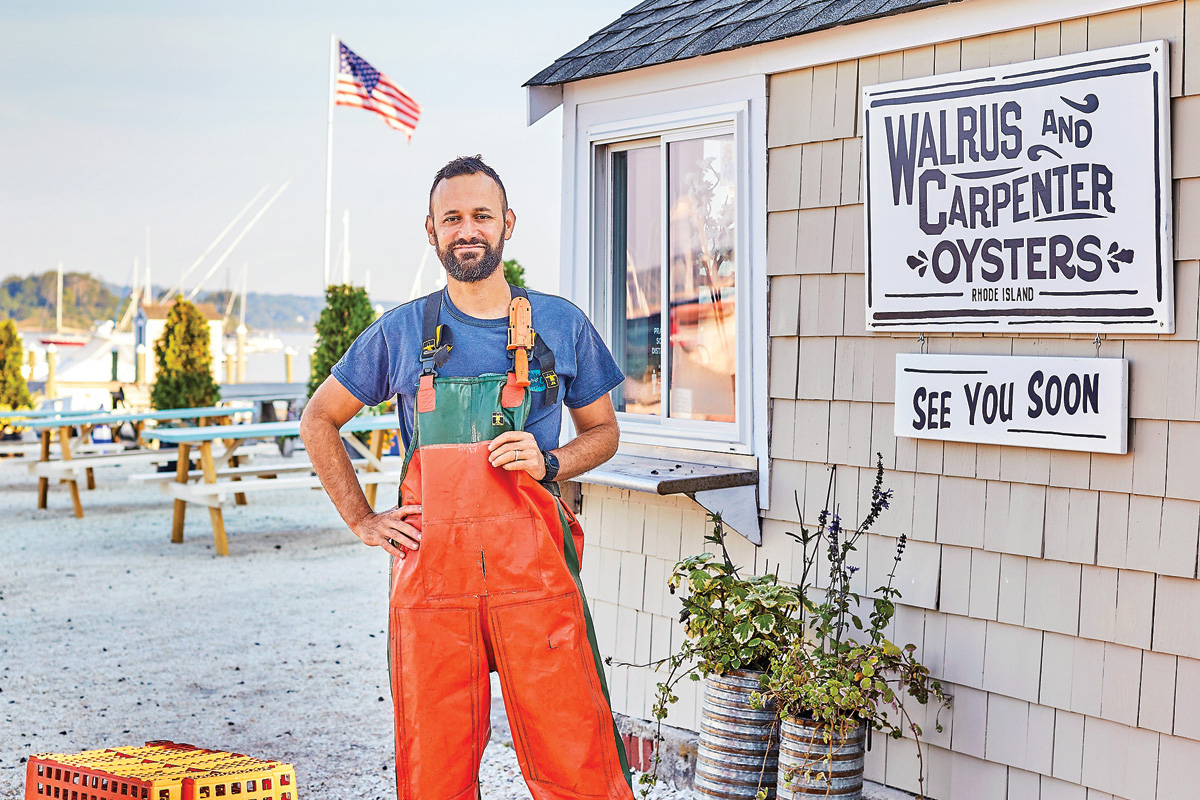 Jules Opton-Himmel of Walrus and Carpenter Oysters in Jamestown. Photography by Angel Tucker.

Owner of Walrus and Carpenter Oysters, Charlestown and Jamestown

Open an oyster bar in a pandemic? No problem. When Jules Opton-Himmel, owner of Walrus and Carpenter Oysters, found out that the Shack at the Dutch Harbor Boat Yard in Jamestown was looking for a new seasonal tenant to replace Tallulah’s Taqueria, which wasn’t renewing its lease after seven years, he responded right away with an idea to open the Walrus and Carpenter Oyster Bar and Farmstand.

After the restaurant distribution side of his business took a hit in the early spring, he brainstormed ways to recoup some of the losses. An oyster bar located next to the harbor where he docks his boat and hauls in oysters from a half-mile away seemed like a perfect opportunity.

Opton-Himmel founded Walrus and Carpenter oyster farm in Ninigret Pond in Charlestown almost a decade ago, where he grows the “Originals,” followed by a Jamestown extension in more recent years for his “Dutchies.” Running two separate locations, he’s familiar with unpredictable stress.

Before COVID-19 hit, he sold about 98 percent of his farmed oysters to restaurants in Rhode Island and New York City. When the restaurant shutdowns took place, he was out of luck with distributing his product to eateries that were trying to figure out how to turn into takeout machines, which did not include shucked oysters on the menus.

“In a week, sales went down by 98 percent. It was a pretty dramatic and abrupt hit,” he says. 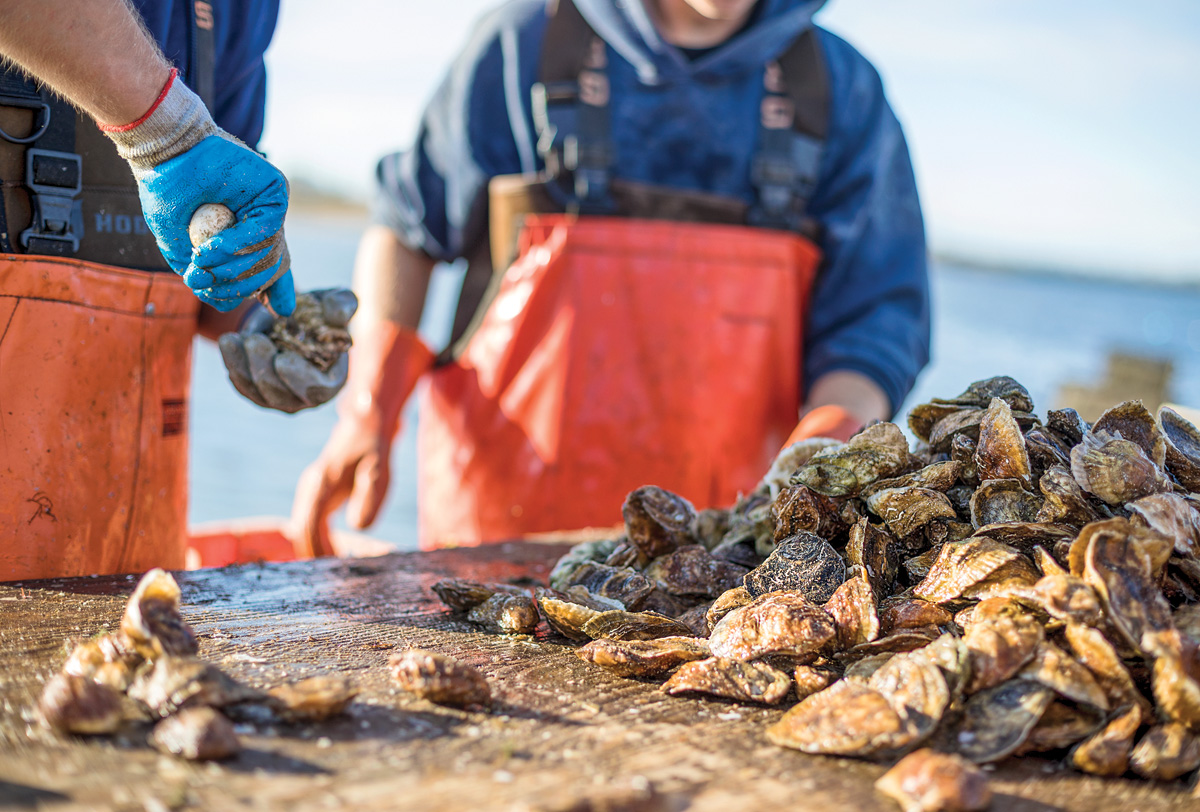 During that time, Opton-Himmel had already hired four more staff members to add to his team of four to assist in the busy spring and summer growing and harvesting season, but he had to immediately pull back from filling the seasonal positions. At the same time, he had to think of a game plan to sell the oysters that were quickly growing larger in their cages, so he could clear the way for the next batch of oyster seed. That’s when he amped up direct-to-consumer sales through home delivery and tapped into locally owned grocery stores.

He and his team created their own online storefront to sell their oysters by mail order (this continued up until mid-June, then was put on hold after restaurants reopened). He sold the oysters from his two farms along with locally harvested wild clams and scallops from their fishermen friends to ship directly to the homes of seafood lovers in New England, New Jersey and New York.

During that time, Opton-Himmel also connected with Patrick McNiff of Pat’s Pastured beef, pork and poultry farm in East Greenwich to have his oysters be a part of the farmer’s farm-to-home delivery program. Walrus and Carpenter’s sales manager also reached out to Dave’s Marketplace to temporarily get Walrus and Carpenter Oysters in the seafood markets of the local grocery store chain, as well as Urban Greens Co-Op Market, which, on its first push, sold out of about 1,600 Walrus and Carpenter oysters in less than an hour while running a $20 special for a bag of twenty oysters. The shellfish are also occasionally available at Fearless Fish Market, the Eddy is currently running a special on the bivalves for its new outdoor patio, and many restaurants are serving them again since they’ve reopened. The direct-to-consumer strategy was all in an effort to move product quickly.

“We had to cut all our prices, but the reality is we have to move our inventory because we need space on the farm,” Opton-Himmel says. “It’s either that or dumping them on the bottom of the ocean.” When the oysters aren’t harvested at their optimal size, they start to get too big, and the oyster farm only has so many cages, leaving nowhere to put the new seed if they don’t clear the bivalves that are ready for the raw bar.

Despite all the challenges he’s faced during COVID-19, Opton-Himmel remains optimistic about the new Walrus and Carpenter Oyster Bar and Farmstand, which is getting a lot of attention on social media. He was also able to get the Payment Protection Program for his employees’ payroll, and he re-hired the four additional people he had planned to bring on for the summer. He’s ready to tackle whatever challenges come their way, especially since he’s already been through so much turmoil with the Jamestown farm over the years. This farm is located on coastal waters right off the Jamestown Bridge, in front of several large mansions on the water. 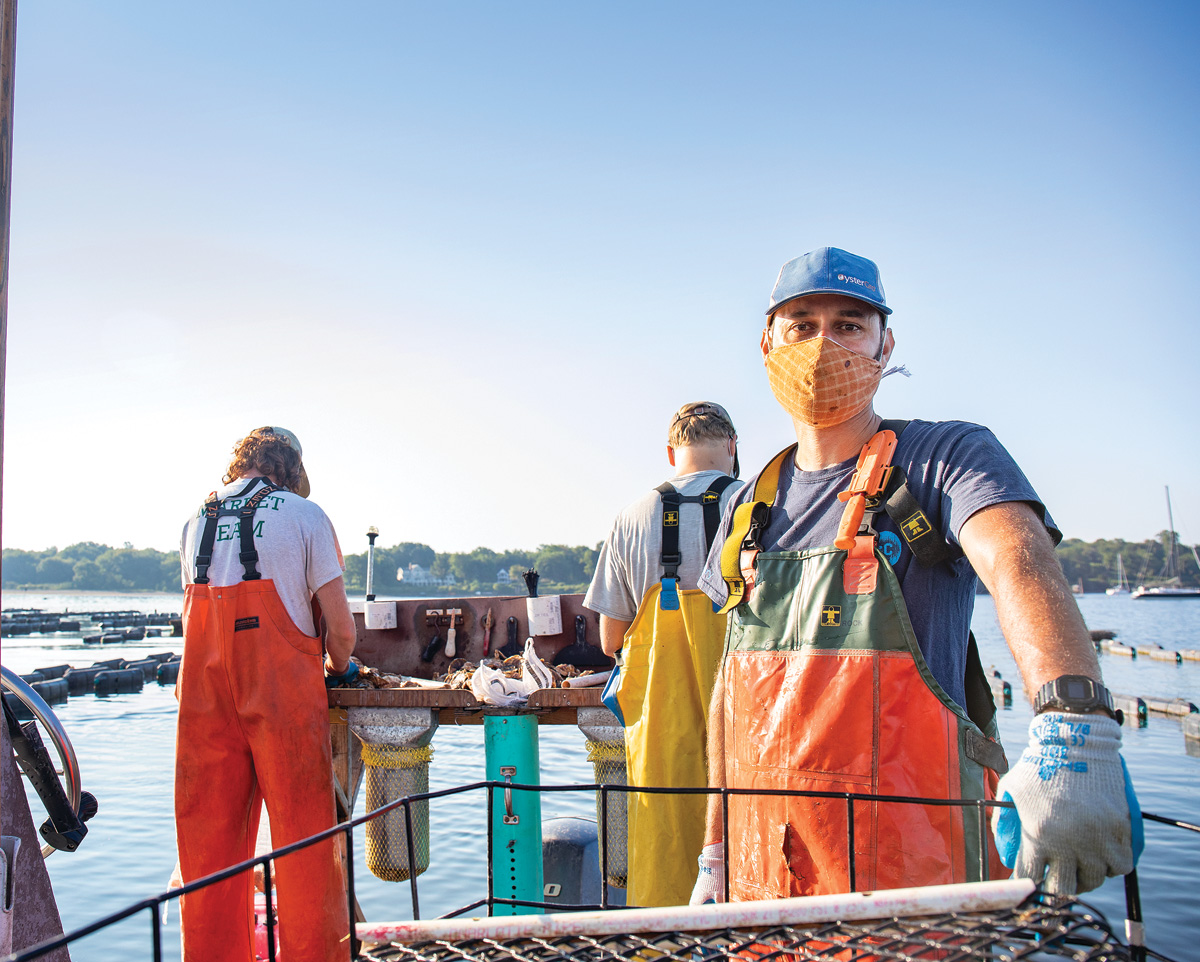 Opton-Himmel harvesting oysters, which are also available at some grocery stores and fish markets. Photography by Angel Tucker.

Opton-Himmel and crew had installed 400 floating cages here that immerse the oysters at the top of the water column, where the most nutrient-rich food flows, leading to bigger oysters that grow much faster than when they are submerged at the bottom of the pond. But the visual impact of these floating cages on the surface of the water caused conflict with the neighbors who did not appreciate the view from their waterfront properties.

Opton-Himmel spent so much on legal issues, he nearly lost the business. Ultimately, he found the Young Farmer Network and discovered that the Center for Remediation and Collaboration in Rhode Island was willing to help farmers and landowners in dispute. The center set up a mediation session for the oyster farmer with the families that neighbor the Jamestown farm, and they were able to listen to each other and come up with mutual solutions.

Opton-Himmel learned from the experience and has agreed to move his Jamestown site and apply for a new lease. The move is currently on hold due to COVID-19 delays, but will happen in the future.

In the meantime, he’s focusing on restaurant and grocery sales and finishing up at the dockside oyster bar and farmstand, run by sales manager Kevin Cummings and his wife, Cara. People can order both shucked oysters and drinks to be enjoyed outdoors as well as oysters to take home. “We had always wanted to do something like this and it happened to land right on my lap,” Opton-Himmel says.

The oyster bar has a relaxed atmosphere by the water, families have been bringing their kids and their dogs and it’s outdoors, so it feels safe. It will close for the season in early October.

“We get to see the product enjoyed firsthand, and we don’t always get that opportunity. It’s getting sustainable seafood directly to the community,” Opton-Himmel says. “It’s also an educational opportunity because when people eat food right where it is grown, it inspires them to take action to protect the estuary and the environment.”