Before his homecoming performance at FirstWorks’ Summer Beats Concert on July 24, rapper and entrepreneur Flawless gets real about his rise to fame, experience on Netflix show Rhythm + Flow, his venture with We The Label and more. 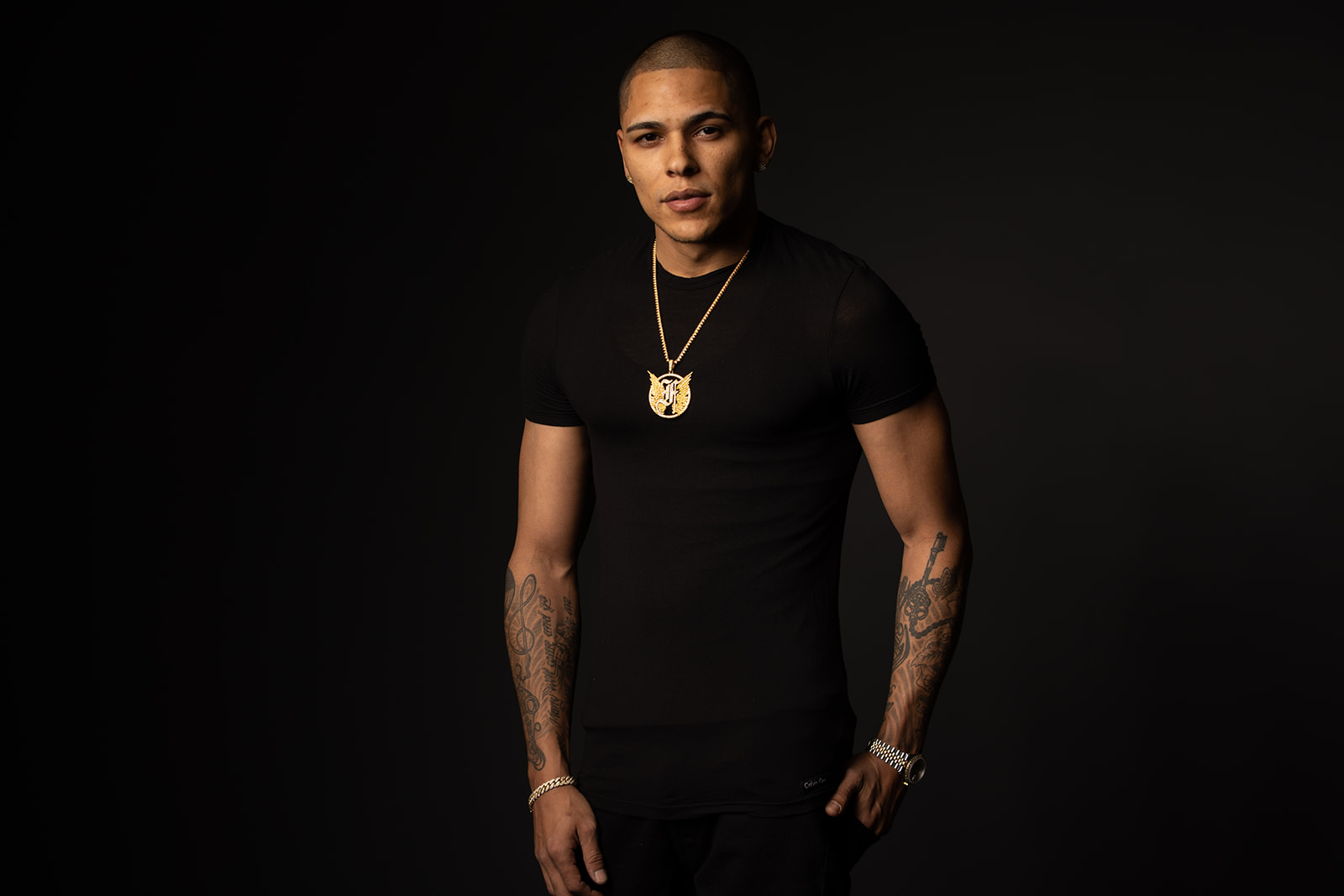 Providence-based rapper, performer and entrepreneur Flawless Real Talk eagerly awaits the first Summer Beats Concert hosted by FirstWorks, where new and returning fans can witness him perform his music at the Roger Williams Bandstand in Providence, open to the public for all ages. Here’s a sneak peek on the artist’s life and how his dedication to his craft led him towards fame.

RIM: What part of Rhode Island are you from and how would you describe your earlier years here?

Flawless: I’m from Providence originally, born and raised. I started doing music at an early age, so it was definitely something that I wanted to pursue, and I just always wanted to travel the world, considering that we are the smallest state. There was a lot of optimism in wanting to grow up and see the rest of the world.

Are you still in Providence?

When and how did it occur to you that rapping was something you were passionate about?

When I was about fifteen, I really started creating music, creating song structures and figuring out that I could get my emotions out on paper. That was the most important for me, it was like a vice for me to be able to express myself that way and it kept me out of trouble. I gravitated towards putting my emotions on paper and that’s how it started for me once I realized I had a talent.

I love that it was a healthy form of self-care for you, being able to journal and talk about your life.

Yeah, it all starts off as therapy. I think everybody who begins to write starts writing about their experiences, their emotions. It started off as a poetry type of format, just getting my expressions out and my story, then I started getting into song format and getting beats from the local flea market. They used to sell the CDs outside, I’d go and get an instrumental CD and write to those beats, then I started meeting people, meeting producers, I started getting my own production and that’s how it started bubbling into me being an actual artist.

You moved from Providence to Atlanta, Georgia; what influenced that decision?

At an early age, I just knew [my team and I] were doing so much and growing within the city, and I felt like I had peaked; we were doing the clubs Thursday nights, I was performing four to five nights a week at different clubs, we were performing at Ultra the Nightclub when that was still around, we were doing all these shows and I just wanted to expand. At the time, Atlanta was really a big market for music, so I packed all my stuff and took the chance. I was about seventeen going on eighteen, and I knew that if it didn’t work out, I still had so much time. It was a fearless move for me, I’d say, “We’re gonna try our best, we’re gonna see if we really can make this happen. If not, we’ll come back home and still have time to figure things out.” It was one of those big chances to take and it honestly was the best thing I ever did because it really allowed me to spread my wings and become who I am today.

That’s such a good mindset, I’m glad you were so optimistic throughout all of that.

When did you first realize that you were gaining more attention and success?

Once I got to Atlanta, we were winning a lot of contests, we entered everything we possibly could that was in the area, there was a lot of opportunity around and we were taking advantage of that. We got the attention of the radio stations, we started opening for major artists [including Ludacris, Rick Ross and Tech N9ne] and that started my live performance game where I was able to start touring, get around the country, see the world and live my dream.

By the way, you were amazing on the Netflix show Rhythm + Flow (which has just surpassed 50 million views across social platforms); what’s one thing you wish you knew before going on the show?

One thing I wish I knew going into the show… I knew, but didn’t take it into account, that it was a television production. It was an adjusting experience for me to play a role in the sense that things were presented in a way that was so clean-cut. I’m so raw and emotional and I like people to see the downfalls, I like people to see the struggle. It was different filming a television show; with the finale, they were asking us to do particular things for production, and for me it was a legacy play. I wanted to have a performance I’d be proud of, that everybody would remember, and I sacrificed the win so to speak to do what I felt was right for my legacy. That’s what I’ve always been about: my legacy. I’ve never been about “clout” or being a person who does things online for views, I’m just so transparent that I wanted the fans who knew me before the show to watch it and see the same person. That was important for me.

How was your reaction when FirstWorks contacted you about the Summer Beats Concert, taking place on July 24?

I was excited; I had been scheduled to headline PVDFest after Rhythm + Flow and then the pandemic hit, so we weren’t able to do that. Then when PVDFest was this year, I was like “Wow, they didn’t call me! What’s going on?” But they told me “We have something else in mind, we want you to do the Summer Beats Concert at Roger Willams Park,” and I thought it was amazing to be a part of the concert series and have my own day.

What are you most excited about for that?

Explain We The Label and why you started the record label? It’s crazy that the single sold out in one day!

We The Label is the new label I have formed that allows fans to be a part of the process and be a part of the winning as well. Many support artists that don’t really give the credit to the fans, who really control everything by streaming the music and by supporting. I wanted to create a system where the fans can buy into the streaming rights of the music and, when the song gets streamed, they get paid as well. Now they’re experiencing the support, they’re winning with us, they’re generating income and we’re all in this together: you support me, I support you. Our first single was called “Find A Way,” we released it and it sold out in eight hours. It was a huge success, so we’re about to release another one, continue to do this with the fans and allow them to be a part of everything and generate income while they stream the music.

You also received the key to the city from Mayor Elorza for your community work and merging your music with education.

It was a combination of a lot of things, it was our community work as well as the way we represented the city on the show. We’ve been doing work with schools like the Trinity Academy for the Performing Arts (TAPA), and we showcased the song “Land of the Free,” which is about immigration policies, and we were able to educate the students using that song. None of my music has profanity in it, so it allows me to educate with music and the kids gravitate to that because they love hip-hop so much – what better way to teach them than with music? It allows my music to be played in any setting and maximizes my potential where fans can play it anywhere: at a park, at a picnic, anywhere possible. It’s a great feeling to be able to do those kinds of things, and that’s why my music has no profanity, that’s why I touch on real things. We have songs about sexual abuse, immigration, just about so many different educational topics and that’s what got us the key to the city. I’m grateful for that because Rhode Island is always home and it feels good to be back.

Would you say your family is a great motivation for what you do?

Absolutely. The more responsibility you have as an adult and as a father, the more drive you have to be successful. My family has been my driving force. A lot of people tell me artists like myself can’t have both the family and the career. That’s a bad stigma, that’s a terrible message to our youth and to our artists that are coming up because you can absolutely have both. That support system is very important for me when I’m away from home, and when I’m missing my home they are there for me and I try to be there as much as I can to show them that if they follow their dreams, they can be anything.

Give us a sneak peak of what’s next in your path.

We’re going to continue to do things with We The Label, continue to release music, and we have more tour dates coming up. I’m excited about this summer concert, about representing the city to the best of our ability and continuing to drive forward and progress every year.

Check out Flawless Real Talk at the FirstWorks Summer Beats Concert, free and open to the public, and find out more about him and his music on flawlessmusic.com.

Interview edited and condensed for clarity.