The Queens, New York, native, who plays the role Aaron Burr in Hamilton, shares details about touring life, working with castmates, and his preparation process for the production, showcasing at PPAC through December 12. 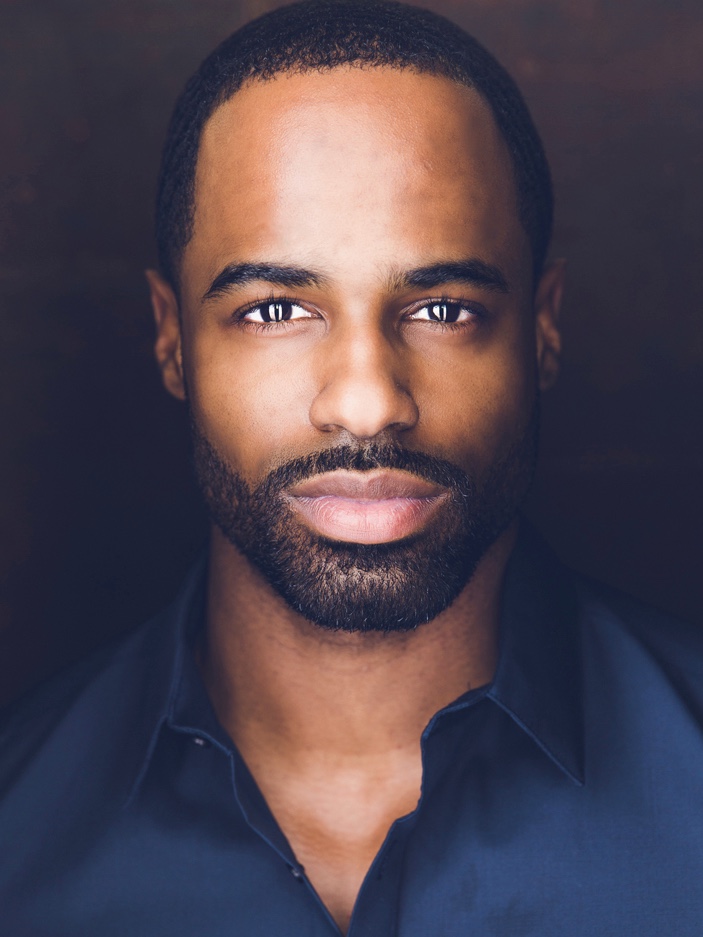 Jared Dixon, who plays Aaron Burr in the production Hamilton, enjoys making his own interpretation of what his character could have been like in real life. Photo courtsy of Caitlyn DiPompo.

For two weeks, the Hamilton tour bus is making a stop in the Ocean State. The Providence Performing Arts Center is showcasing the iconic American musical written by playwright, actor and film director Lin-Manuel Miranda. Here’s an interview with one of the stars of the production, Jared Dixon, who plays the antagonist Aaron Burr.

Edelinda: How long have you been in the acting industry?

Jared: I’ve been a professional actor for about eleven years now.

E: Give a short summary about Hamilton.

J: In the first act, Hamilton is the narrative of the life of Alexander Hamilton in the events leading up to the Revolutionary War in America, and the events leading up to Hamilton’s popularity as a politician and his assassination at the Burr vs. Hamilton duel in the second act. It’s about the life of Hamilton, and we like to say it’s the story of America then, told by America now, so all the principal characters in the show are representative of people in America now, as opposed to our founding fathers, who were white.

E: Does traveling from touring get exhausting?

J: Absolutely. The main sacrifice that I think touring theater workers make is being away from their support systems. I don’t have my parents to take my dog on the weekends, or my fiancee is not here to help me with laundry and cooking or things like that, so everything is my responsibility, like being back in college almost. The trade-off is I get to do what I love, and every night I get to go out there and change the world, one theater goer at a time. It’s worth it, and we can take vacation time and refuel when we can. For the most part, it’s a very rewarding job and there’s some things that come with it, just like any other job.

E: Who is Aaron Burr in the play?

J: Aaron Burr is, I guess some would say, the antagonist – it depends on how you look at the story. Thomas Jefferson to some people is more the antagonist than Aaron Burr is. But Burr is the other half of the play. We’re on this journey, watching Hamilton excel in life, then we’re also on this journey watching Burr bear witness to that success as someone who got their start in the political field and in the war around the same time as Hamilton. It’s the opposite side of the same coin: Where Hamilton came from nothing and moved to America as an immigrant and pulled [himself] up by the bootstraps, Burr was born into a rich legacy of elites in New Jersey, and just the same as Hamilton, lost his family very early in his life. He was left with just his name and the legacy of his family and whatever money was left behind to help support his academics. For some people, Burr is known as the fallen founding father; he did participate in a lot of things that helped us establish the United States, but just didn’t have as much of an important role in the things that would come after the Revolutionary War. For anyone who does know, he’s a well-respected political figure outside of being the person who killed Hamilton, unfortunately.

E: Must be exhilarating to play him then!

J: Yeah, it’s like I’m in on this secret that not everyone knows and I get to be the one who tells it. A lot of people in Hamilton’s history know that he’s the founding father on the $10 bill, they know that he helped create a significant part of our financial system, he did a lot of the footwork for us to have support for the constitution, but people don’t know much about Burr. A lot of his legacy was kind of washed away with the duel and the scandal around the duel. We start the show knowing he’s the villain because he shot Hamilton, but we get a sense of who the person was behind that lore throughout the story, and I think it’s really cool to be the person who gets to do that. It’s a little more multilayered than some of the other stuff in the show. 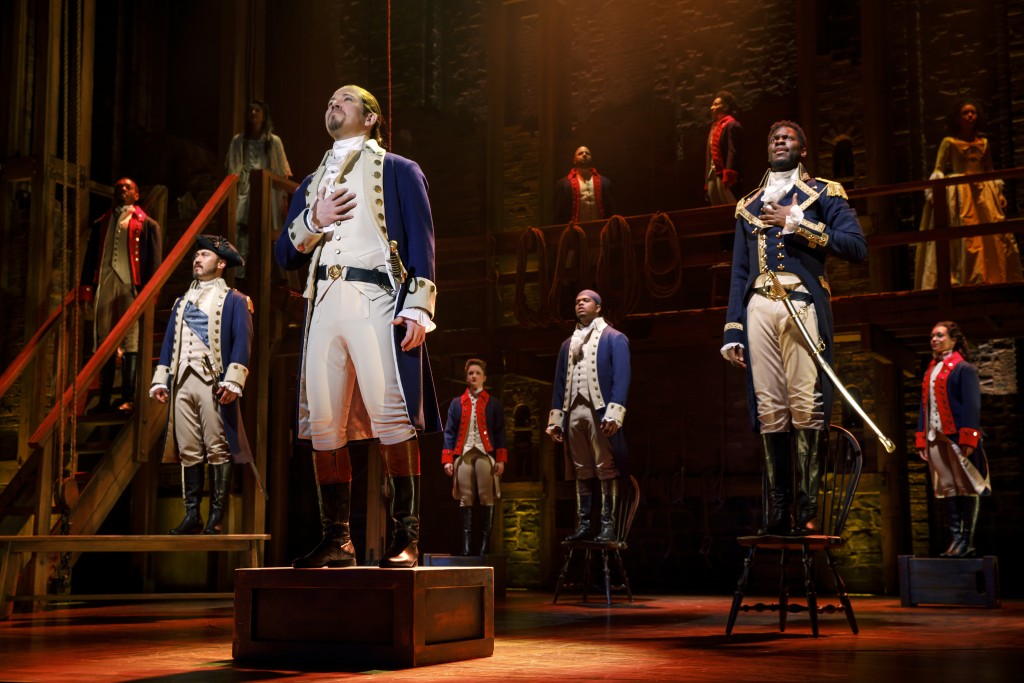 Watch Hamilton at PPAC, which will be showcasing through December 12. Photo by Joan Marcus.

E: What’s your favorite aspect of being in Hamilton?

J: I really like the different interpretation of every role; the show changes a lot depending on who’s playing what role. We’re telling the same story every night, the plot points don’t change, the costumes don’t change, but the people do from night to night. For instance, every week, one of the understudies for Hamilton comes on, and he has two understudies so I really get to act with three different people. I get to play the show with three different versions of Hamilton and figure out what each person is going to do. One play is a little more conceited, the other play is a little more arrogant, the other one is a little more headstrong: It’s different shades of the same color. I love bouncing ideas off everyone in the show and Hamilton is one of those shows where you really get to infuse some of your own personal ideas and characteristics into these characters because they’re just humans. At the end of the day, we’re playing people who actually existed in our interpretation of what those people could have been like.

E: Opinion about the play overall?

J: I find it interesting that Lin-Manuel Miranda was able to fuse the musical theater world and elements of hip hop. It’s authentically a hip-hop story where, if you listen to rap in the early ’90s and late ’80s, a lot of the lyrics say, “I made it from nowhere, I didn’t have anything growing up,” that’s the essence of hip hop. Hamilton does have the essence of hip hop; there are references to famous rap lines and some of Lin’s favorite rappers. It’s a musical about our founding fathers with hip hop elements.

E: Advice for people who haven’t watched Hamilton yet?

J: I would say don’t watch it on Disney+ until after you see it live. Listen to the cast recording, get yourself familiar with it, then come see us in Rhode Island. When you want to relive it, then go watch it on Disney+. [Also] anyone who’s been to a Hamilton show knows we like our audiences loud, so bring the energy. It’s much more enjoyable when the audience participates and when they allow themselves to express freely how they feel about the things they’re watching. They’re one of the actors to us. How they respond to things really ignites the theatrical experience in a very special way.

E: You’ve been in several productions [the Lion King, Rent, the Color Purple, etc.]; how do you prepare for a role?

J: It depends on the show, but the first place I start is the text. For the Lion King, there’s the libretto and for Hamilton, there’s the music score. If there’s a recording of it, I listen to it, then I start developing ideas about what the person that I’m playing is trying to accomplish, as well as the physicality of that person: how they think, how they react in certain situations, how I relate to and how I’m different from that person. I build a toolbox of things that would be appropriate for that character to do, say and play in the show, then it pretty much comes down to memory. I start getting repetitions in and spend as much time with the words as possible. The last step is performing; you learn so much by being on stage. There are things that you’ll never understand until you do it. You can practice playing basketball for hours but you won’t actually know how to hit a game-closing shot until you have to hit a game-closing shot. It’s the same on stage.

E: Ever feel intimidated by the stage?

J: For me, I don’t really get nervous, I get excited. I learned a long time ago that nerves are just a reminder that you care. When you get nervous it’s probably because you really care about the outcome of something. I just remember that I love this thing and that I was the person chosen to do it out of hundreds of people who have auditioned for this role. I was chosen, like that’s something to be proud of and be excited to share with people.

Hamilton is playing at PPAC through December 12. It runs for two hours and forty-five minutes with an eighteen-minute intermission. Visit the website for dates and times. Tickets vary from $69–$399. 220 Weybosset St., Providence, 401-421-2787, ppacri.org

Interview edited and condensed for clarity.

Q-and-A: PPAC’s Technical Director Shares What It’s Like to Prepare for Pretty Woman in COVID