If you’ve never roasted a whole fish in the oven, it’s about time you try. Fearless Fish Market specializes in selling local species on the West Side of Providence. Some are familiar to most Rhode Islanders, like the wild striped bass, bluefin tuna and local bay scallops, while others are lesser known, such as the Maine sea urchin, John Dory, sushi-grade fluke and razor clams.

“Our website even has a section that includes fish cooking methods, recipes and how-to videos for deboning whole fish and shucking oysters,” Meltzer says. Seafood is now available for pre-order on the website and the market also offers contactless pickup. “Already we’ve seen it working. Customers have loved trying all sorts of new local species that they were not aware of before along with new formats, such as whole fish.” 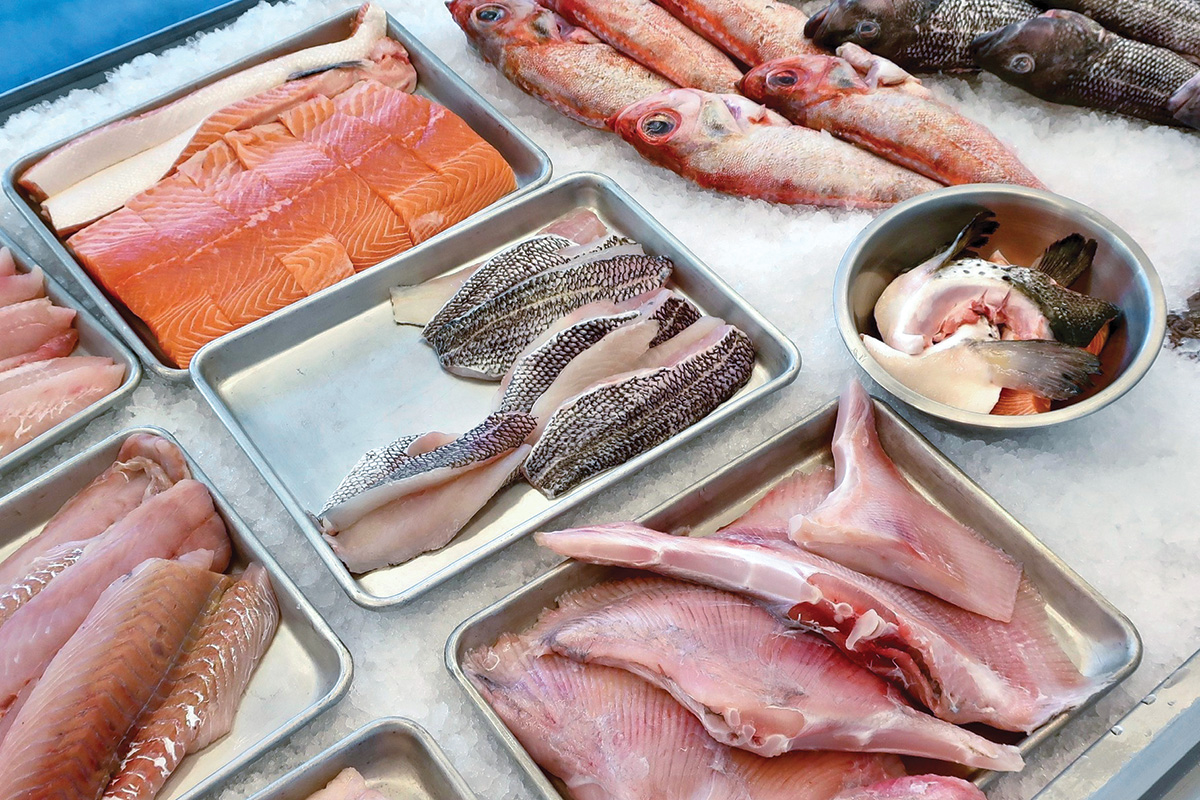 Meltzer provides easy instructions for said task, which is so simple it doesn’t require a recipe. Stuff the cleaned and gutted fish with lemon slices and fresh parsley, coat it in extra virgin olive oil with salt and pepper and roast it in the oven at 375 degrees for fifteen minutes for every one-inch of thickness. It should be cooked to 145 degrees. I tried it with two whole scup and the results were delicious.

“The reason why that whole roast tastes so good is because you get that fat and collagen from the bones and it gets in the meat and it’s harder to overcook,” Meltzer says.

The fishmonger says Fearless Fish was two years in the making as he narrowed down choices for the location between Boston and Providence. He worked in other fish markets, including New Deal Fish Market and the Fishmonger, both in Cambridge, Massachusetts, and Kyler’s Catch Seafood Market in New Bedford. He also spent time working at fish wholesaler and distributor Fortune Fish Company in Chicago while attending the Kellogg School of Management at Northwestern University. He also spent time at Pangea Shellfish, a Boston-based oyster distributor that owns and operates an oyster farm in Duxbury, Massachusetts. He then entered the design world in Boston to learn the practice of human-centered design, and it was there he met his wife, Rose Manning, and decided to return to seafood.

“Ultimately, I decided on retail because I’ve found that quality and product knowledge is often lacking at supermarket fish counters. In addition, supermarkets and some markets don’t often carry the interesting local species that are available to us in Rhode Island,” Meltzer says. “I thought there was opportunity to do better.”

Though his wife is originally from Point Judith, the couple settled on Providence for the Fearless Fish location because they were smitten with the city’s quality of life and they saw huge potential in the burgeoning food scene.

“I absolutely love Providence. I thought this is perfect. It’s so much easier to live here than Boston. It’s much more affordable, it has great restaurants and creative energy,” Meltzer says. “On top of that, there’s excitement around food here, and it’s the Ocean State. For a fish market, I was like this is the place. This is where we’re going to do it.”

Now, Fearless Fish is an around-the-clock operation. Twice a week, the market sends out emails to let subscribers know what is available to start the week and for the weekend. The newsletter also shares some behind-the-scenes fish industry talk, such as how quality is not always determined by when the fish came in, but how it was handled long before it arrived at the shop.

“For example, does a boat gut and ice the fish properly or does it bake in the sun on the boat deck? This can be the difference between ‘okay’ fish and great fish,” he explains.

“A lot of squid might be caught here, frozen, and then sent to China for processing, and then frozen again and sent back,” Meltzer says. “We sell fresh squid or a squid that is once frozen [dirty] and we thaw it here and clean it, and the quality difference is amazing.”

Meltzer works with local oyster farmers and the Ocean State Shellfish Cooperative that deliver shellfish, and he secures other seafood from dealers who source directly from fishermen.

On the day we visited, Andrade’s Catch of Bristol dropped off Narragansett Bay littlenecks dug hours earlier by local quahoggers. The goal is to buy seafood from dealers that source directly from fishing boats.

“Buying directly from fishermen is not so easy for a number of reasons,” Meltzer says, explaining how the fishermen would have to package, sell and deliver their own fish for that direct experience, so it makes sense to work with dealers. “We try to be as close to that connection as we can. Another reason is the volume that a lot of fishermen bring in would be too much for us to take. It helps us to get in a relatively small number of high-quality items.”

Not only does the market stock the star of the show, but it also has cooking supplies and cookbooks on hand for making your favorite fish dishes, including sushi. Shelves of panko crumbs, fish stock, Kewpie Mayo, ginger, onion, lemons and more help shoppers create restaurant-quality meals at home.

In recent months, the shop has started a fish share program where customers sign up to get a weekly or bi-weekly package of seasonal, local fish (filleted or whole) delivered to a location of their choosing. The program includes wild-caught fish landed in one of our New England ports each week, which may be species like Acadian redfish, hake, pollock, monkfish, skate wing, black bass, flounder, sea robin and more.

Meltzer says Fearless Fish market wants to make it easier for people to eat more fresh local fish, so it’s teaming up with other local food and wine shops to serve as convenient pickup points. The program is also allowing Fearless Fish to expand beyond Providence into Newport and Warren. Some of the new pickup points include Stock Culinary Goods and Campus Fine Wines in Providence, Newport Wine Cellar and Gourmet and Prica Farina in Warren. Expanding beyond the Providence storefront will also help customers try new types of fish they might not choose themselves and it’s also a way to increase fish consumption.

“We are planning to expand around the state — mostly around the bay. We’ve found that partnering with small, independent specialty food and wine shops has been a win-win,” says Meltzer. “Pair that with the fact that we are bringing people local fish and we have a nice symbiotic Rhode Island system going.”

The cost of the fish share is $18 a week for two servings (about one pound of fillet or two pounds of whole fish) and $36 a week for four servings of fish (about two pounds of fillet or four pounds of whole fish). Every week, fish share participants will also receive an email with species details and cooking recommendations. Customers can put a weekly share on hold with two days advance notice.
But that’s not all they’ve been up to.

“We wanted to do some sort of consistent philanthropic program from the beginning with Fearless Fish; COVID and the George Floyd incident just pushed us over the edge to get it going,” says Meltzer. He chose two beneficiaries: the Amos House, an organization that offers services and programs for Rhode Islanders experiencing homelessness and poverty; and the Nonviolence Institute, a Providence-based organization that fosters peace by employing Martin Luther King Jr.’s philosophy of nonviolence.

“We started with donating $1 per pound of fish sold on the week of June 2nd. Since then, we’ve decided to donate 1 percent of sales from the rest of June to the Amos House and the Nonviolence Institute,” he says.
Going forward, Fearless Fish will continue donating 1 percent of sales to organizations that the owners believe are doing good work toward causes they believe in, especially local organizations.

“The environment is important to us, so organizations doing environmental advocacy will certainly be selected, but also social support/justice organizations,” Meltzer says. “We plan to select an organization or two to donate to for each month to make the effort have a little more impact.”

In the meantime, they will keep supplying the local community with good, fresh, local fish. For those interested in the market’s curbside procedure, you can order online Tuesday through Saturday from 11 a.m. to 4 p.m. There is a one-hour lead time for online orders, but you can also call ahead to place an order at 415-8905. Walk-up orders are also accepted, though the market is not allowing customers in the shop at the time of publication.