The notorious story of Buddy Cianci is brought to life by Trinity Repertory Company this fall in a stage adaption of Mike Stanton’s book The Prince of Providence. 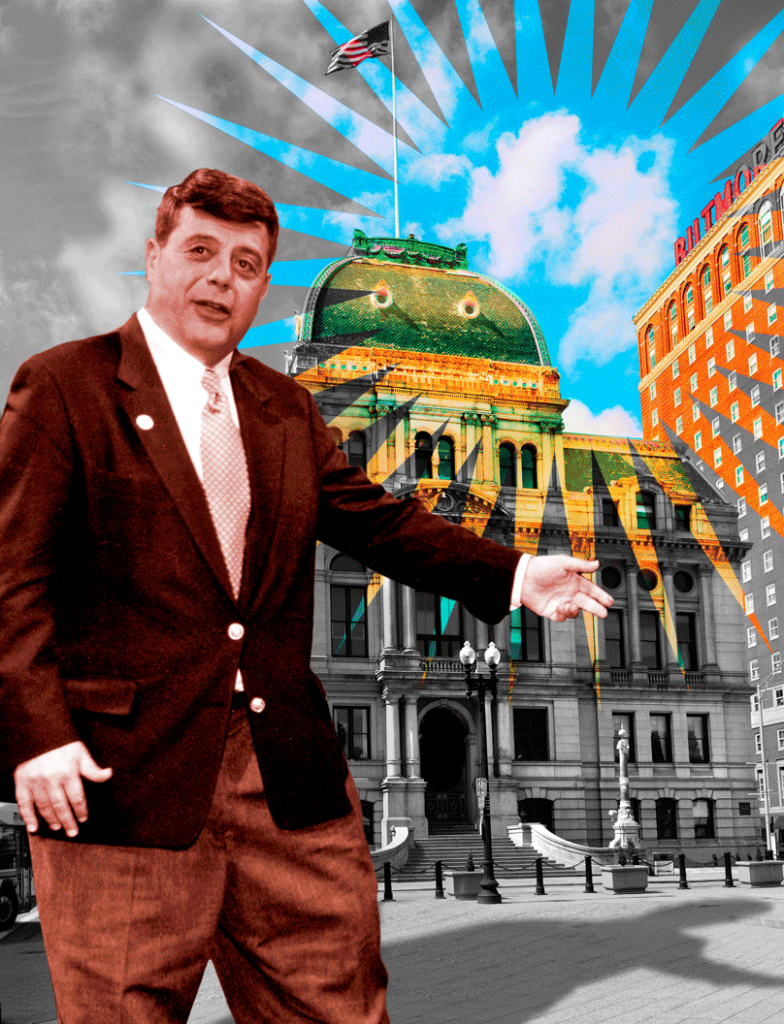 How long has the stage production of The Prince of Providence been in the works, and why is now the perfect time to launch it?

This particular production has been in the works for about four years. I met with Mike Stanton in the fall of 2015 with the idea of turning The Prince of Providence into a play at Trinity Rep, but first we had to wait for the film rights to run out, and then we had to find the best playwright to adapt the piece, and figure out contracts for all that, so it took a little while to get everything in order. Tom Parrish, our executive director, spent a good deal of time ironing out the various agreements, which wasn’t an easy task. We eventually landed on George Brant, a very talented playwright who has worked at Trinity many times (we recently premiered his very successful Into the Breeches two seasons ago), and who lived in Providence for about eight years, and we commissioned him to write the adaptation in 2017. We had the first read-through of the play in the summer of 2018, and the piece seemed strong enough that we could confidently program it into our season. After that first reading, the room was buzzing with excitement…it was a thrilling adaptation, and we knew we wanted to produce it immediately.

I think Buddy’s story will always be incredibly captivating, no matter the time, as evidenced by the success of the book The Prince of Providence as well as the podcast “Crimetown,” but this really does feel like an interesting moment to talk about not just Buddy, but leadership, politics, showmanship, corruption… A big part of that is Trump, of course, and I know people have made comparisons and distinctions between the current President and Buddy, and part of it is that we’re also headed toward a presidential election, so politics are in the air in a very profound way.  But it really feels like a crucial time for us to look at our past, look to our present, and ask “Who do we want our leaders to be in the future? How do we really want them to behave?” I think that’s why people are so excited by this production — it’s a story specific to this community, of course, but it also feels very of the moment.

How closely does George Brant’s script follow Mike Stanton’s book The Prince of Providence, and is the writer involved in the production?

It follows the book pretty closely! Mike’s book is very well-researched and incredibly thorough, of course, plus it’s a wildly exciting read, so it makes sense to follow it pretty faithfully. That being said, a play is a different animal than a book, so there are some small changes here and there to make the piece more theatrical, and of course for time (not easy to fit thirty years into two hours!). I know George also did his own research, and read, among many other things, Buddy’s book Politics and Pasta. So it’s faithful to Mike’s book, but not slavishly so.

And Mike is involved in the production, but mostly as a resource for the director, playwright and actors. He knows so much about Buddy and the characters, obviously, and still knows many of the people from the book. For example: Sheila, Buddy’s first wife, is meeting with the actor playing her in the play, the wonderful Rebecca Gibel, and it was Mike who put that together. So we’re very grateful Mike can bring his knowledge and expertise into the rehearsal room when he has the time. He’s teaching at UConn and is doing some work for the Boston Globe Spotlight team, so he’s a busy guy!

How did you choose who would play Buddy [Buddy will be played by Scott Aiello.]?

We were looking for someone with charisma, who could land a joke and give a good speech, but also someone who can truthfully portray Buddy’s darker side too. Getting that duality was important to us. We weren’t necessarily looking to find someone who looks exactly like Buddy, as much as we were more hoping to find someone with Buddy’s energy and style. (Though of course if they were Italian, maybe a little on the shorter side, maybe balding a little, that didn’t hurt either…)

One other thing: the play starts when Buddy’s just starting to run for his first term as mayor, and ends at his trial, so it covers his life from about age thirty to sixty. We needed someone who could play both the younger and older Buddy, so we wanted someone in their 40’s or so.

What would you say to people who protest bringing Buddy back to the stage in this highly-anticipated play?

I will say, though, that I think part of Trinity Rep’s mission is not just to produce plays, but to produce plays specifically for the people of this particular community. We are lucky enough to be a nationally celebrated organization, but I think our power actually comes from how closely tied we are to our city, our state and our region. And Buddy is the single most interesting, fascinating and dynamic story in Rhode Island’s recent history. It’s not even close. So in a lot of ways I think it would be irresponsible on Trinity Rep’s part not to tell that story — that’s why theater exists, after all, to help chronicle the stories of our time. So we’re not looking to glorify him, or to tear him down, but as Hamlet says “hold the mirror up to nature, show virtue her own feature, scorn her own image, and the very age and body of the time his form and pressure.” People can, of course, decide for themselves how well we accomplish that goal! But that’s truly our intent.

How are you able to adapt Buddy’s epic life story over many decades into a single play?

Ha, it wasn’t easy! We basically broke the play up into two halves — the first act takes place mostly in the ’70s, during his first term, and then the second act takes place in the ’90s, during his second stint as Mayor. The play, like the book, concludes with Buddy’s trial.  We also want the play to have a satisfying arc, and not merely feel like a “greatest hits” montage of famous moments from his life. I think we’ve done a pretty good job!

What’s the best way to get tickets?

The best way to get tickets is to subscribe! That’s true with The Prince of Providence, as well as with our other shows, including Charles Dickens’ Tale of Two Cities, August Wilson’s Radio Golf and the musical Sweeney Todd. If you want to guarantee seats, you want to subscribe. trinityrep.com