Chef Jacob Jasinski and team at Cara at the Chanler in Newport wow guests using ingredients harvested from the hotel garden, local farms and the ocean. 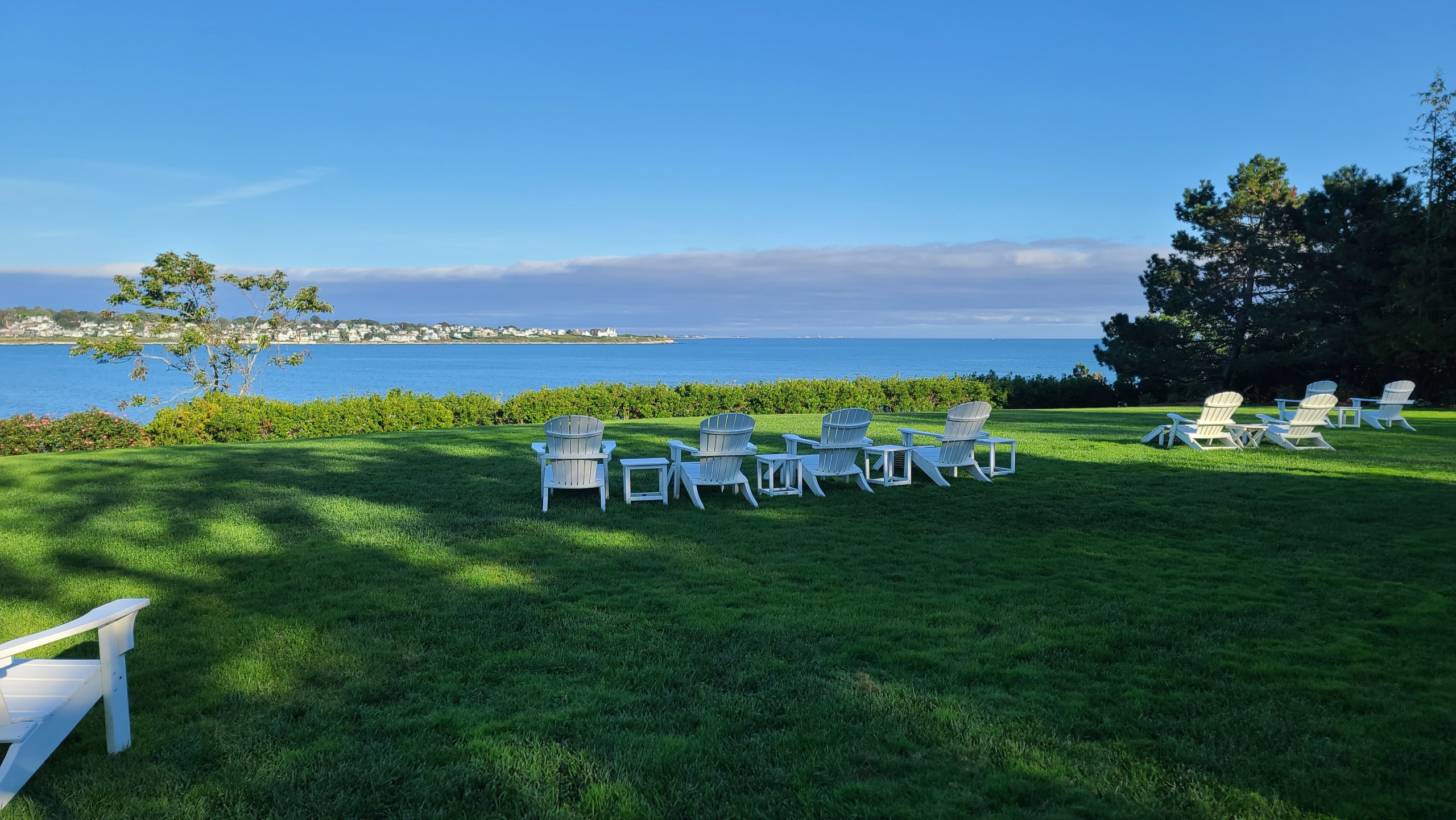 The view at the Chanler in Newport.

When there’s a real reason to celebrate, only a sensational meal will do, and the Newport waterfront restaurant Cara at the Chanler is the place to do it. The Forbes Five-Star restaurant is perched on the Cliff Walk, overlooking beautiful Easton’s Beach and the surfers who brave those waves at any temperature all year long.

At Cara, chef Jacob Jasinski and team curate special five- and eight-course blind tasting menus with optional wine pairings that are served in a private dining room overlooking the ocean. Chef Jasinski presents each course to guests, explaining where every ingredient comes from, including vegetables just plucked from the inn’s gardens and seafood reeled in from Block Island Sound, visible right on the horizon. They call it “avante garde cuisine,” and it is in fact high fashion food, made using the most spectacular ingredients available locally, just like haute couture fashion is sewn with the highest quality fabrics. Fall is the best time of year to experience a tasting at Cara. 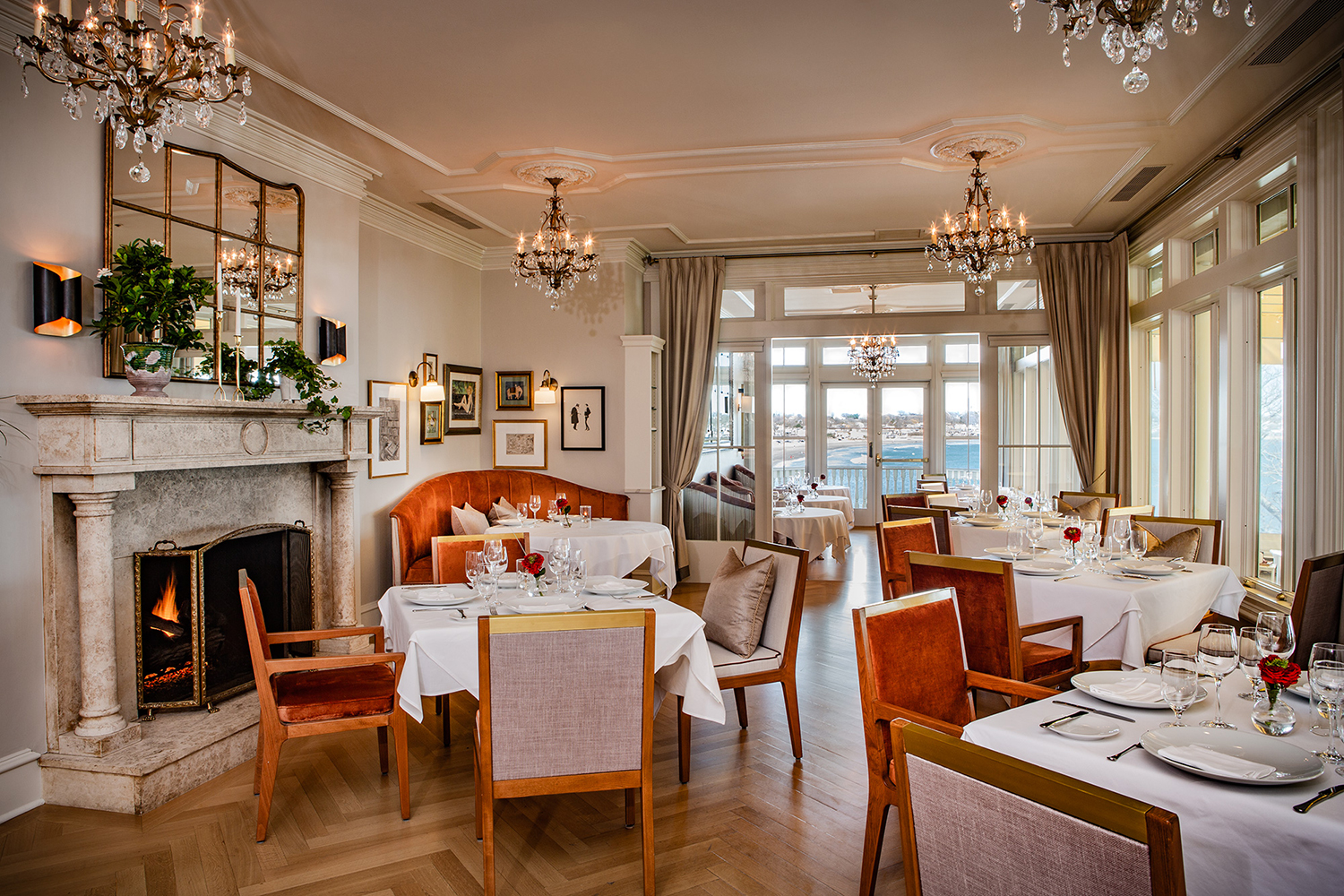 “This is our favorite time of the year to be cooking professionally,” says chef Jasinski. “The ingredients that have been around for the last couple of weeks are exploding with flavor and bounty, and we entered into the beginning of fall, so we have fall ingredients to play with as well.”

Each plate is assembled, orchestrated and unveiled with the precision of a choreographed dance, full of color and flavor. The team creates new dishes each day based on what’s available from the harvest. It’s a chance to tap into their own creativity while being influenced by the local ingredients available at the moment, just like how chefs cook in Europe.

I’ll run through each course we enjoyed with the chef’s description so guests can know what to expect from a similar experience. There is an optional wine pairing (for an additional cost), but each pour is hand-selected to accentuate the flavor of each dish. 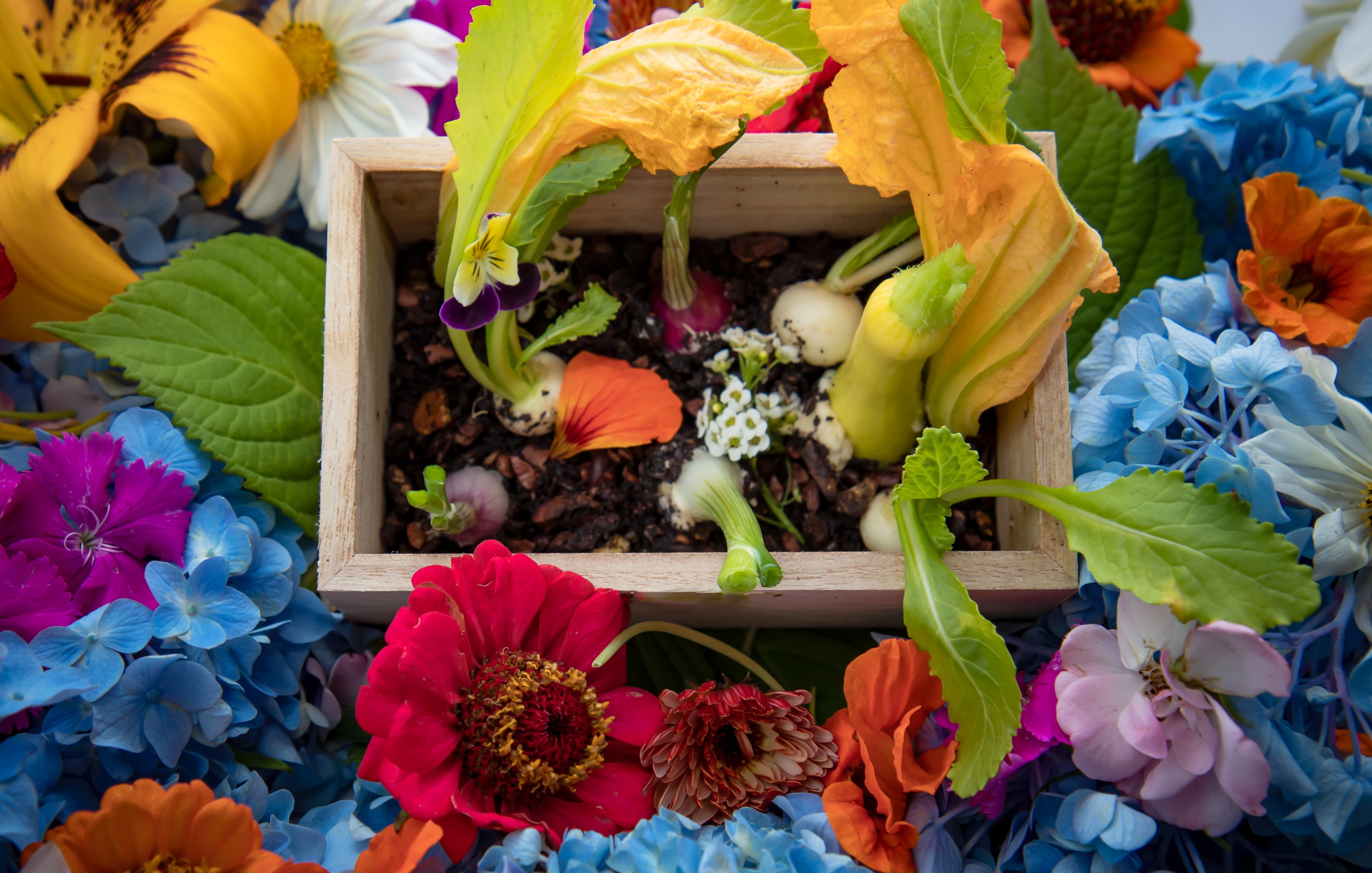 The first course was the “Chanler garden box.” The vegetables were hand-selected and picked from the Chanler’s garden, then dipped into a cultured butter blended with white asparagus puree. “We plate them in edible soil, so everything can be consumed (other than the box). Don’t eat the box itself,” says Jasinksi with a laugh. “Grab the vegetables from the top, no utensils are needed, take a bite and season them with more butter and dip it in the dirt.” I believe the soil was made from roasted and charred vegetables. 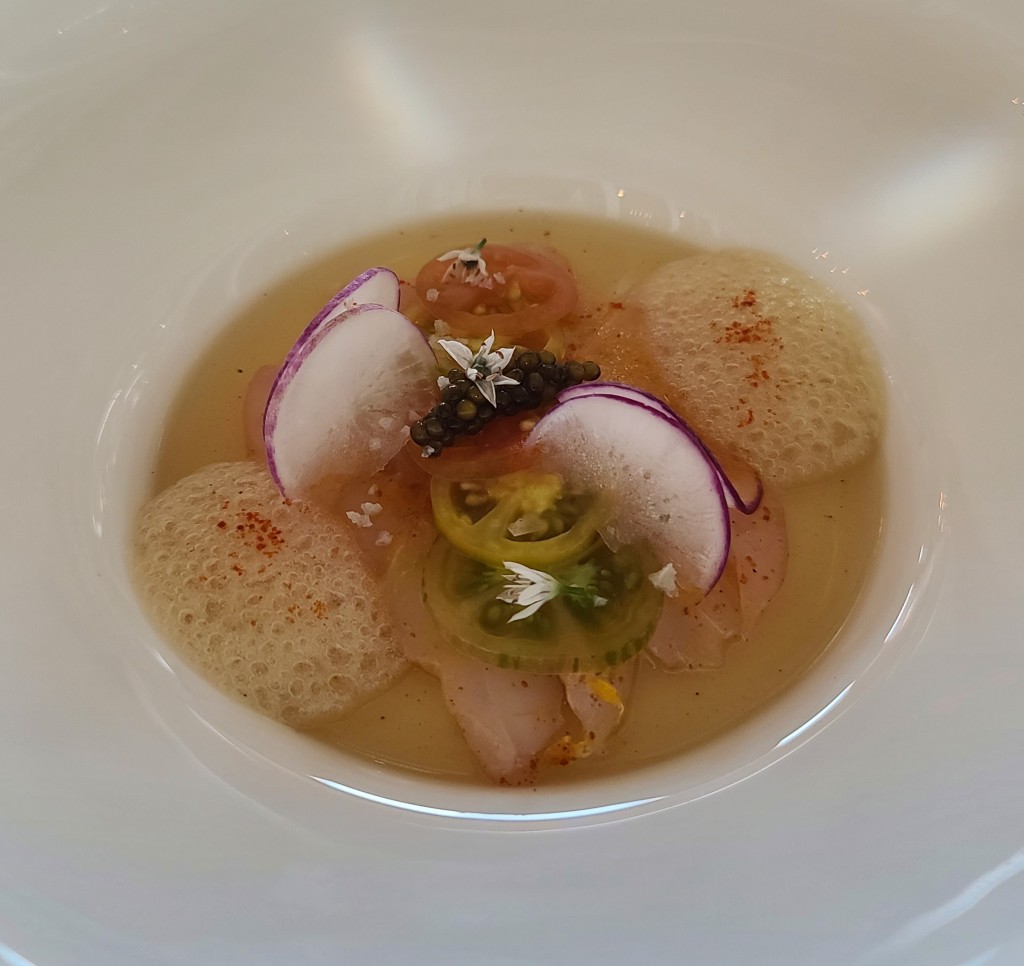 “This is black sea bass caught right here in Newport. It’s in peak season right now,” says Jasinski. “They should be around for the next couple weeks or so and they develop more flavor as the water begins to get a little colder.” For this dish, the kitchen team lightly cured the fish with seaweed and sea salt that they extracted from the ocean tide on Easton’s Beach, visible right through the Chanler’s windows.

“We cook it down and crystallize it,” Jasinski says. “We also have tomatoes exploding out of the garden, so we have a tomato gelee underneath the sea bass, and we have tomato parfait and shaved heirlooms to provide a little texture and acidity and that raw flavor everyone enjoys with a good tomato. To finish, there’s a little Ossetra caviar on top.” 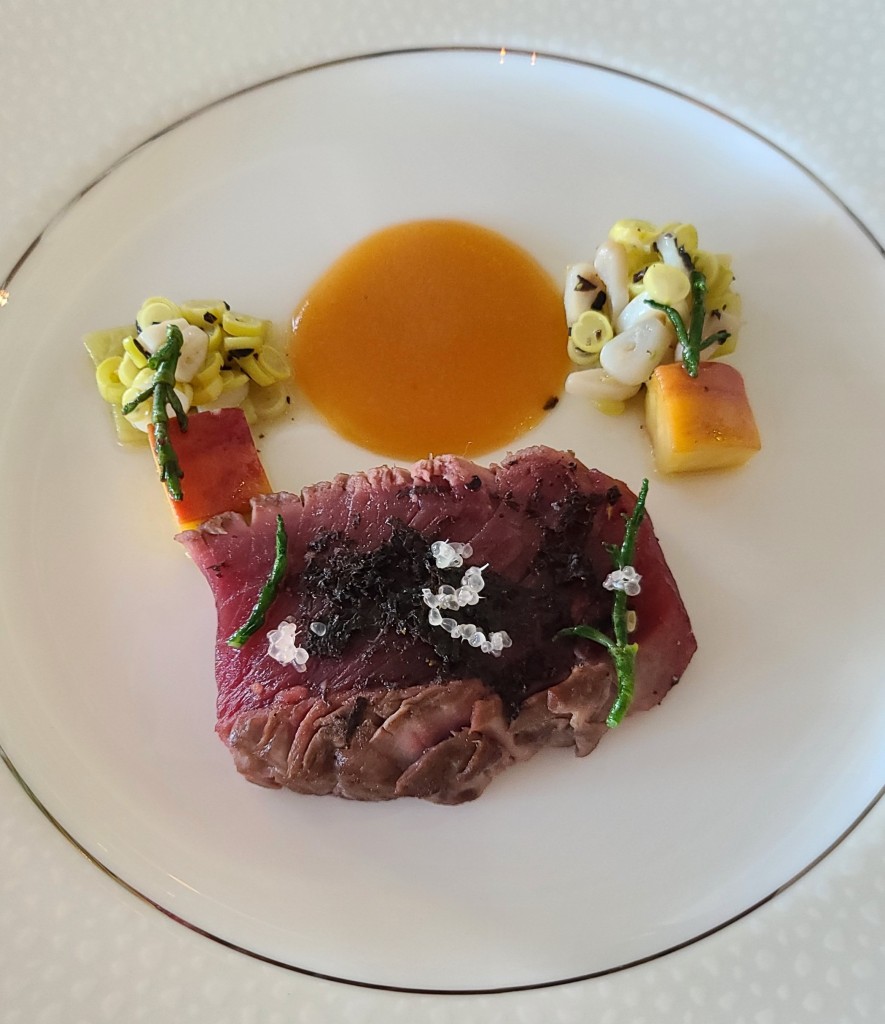 Chef Jasinski says this is probably the last bluefin tuna that the team will get this year. “This is bluefin tuna coming right out of Block Island sound behind me, as far out as you can see on the horizon,” he says. “They run strong through the summer, but as the weather gets cooler, they follow their way back down south.” For this dish, the fish was cooked over white oak and served with Rhode Island peaches and an emulsion made with citrus. There was also a ragu of summer beans coming from the Chanler garden and neighboring farms, served with razor clam and end-of-season black truffle. 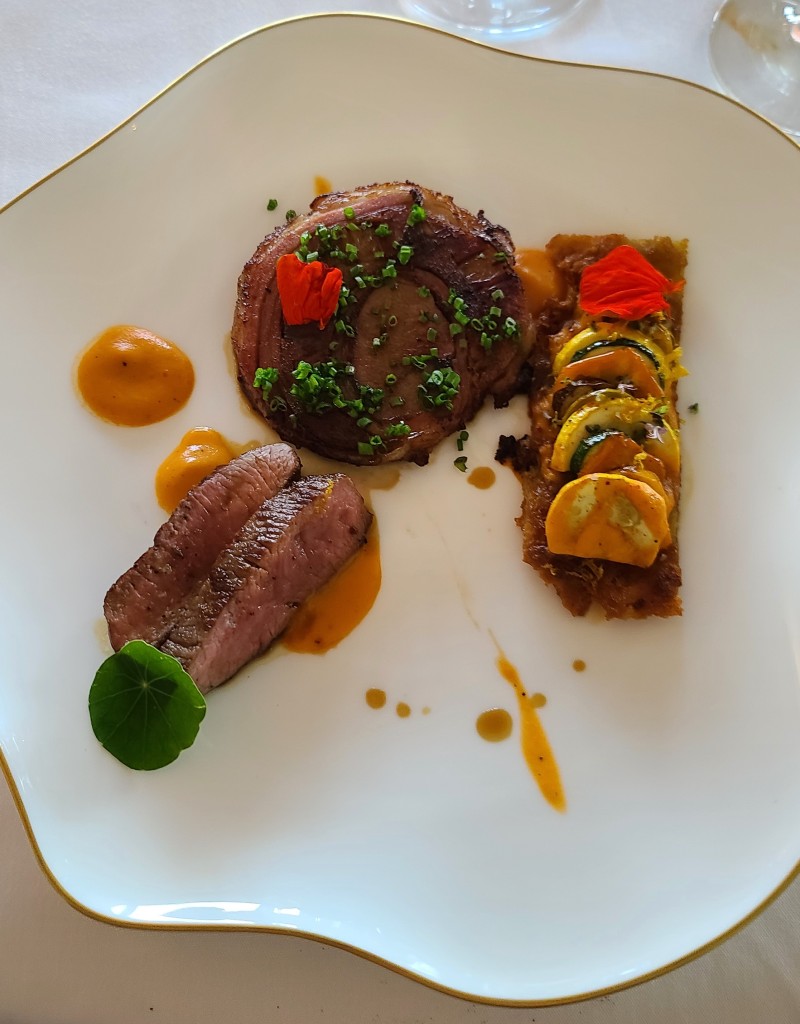 A forty-five-minute drive from the hotel, farmer Don Hopkins raises the Southdowns breed of lamb in Scituate, Rhode Island. The kitchen team gets two lambs and makes every effort to use the full animals. For this dish, the team pan-roasted lamb loin with brown butter and lamb fat. The kitchen also collaborated to make a porchetta with the remaining parts of the animal. “Traditionally it is done with pig, but we did ours with lamb, so you have braised shoulder, a loin inlay, then you have bellies that we cured and smoked as a bacon and that’s all wrapped into the skirts of the animal and slowly braised together with a tremendous amount of the lamb jus,” Jasinski says. “There are a lot of different textures in there, and it’s a beautiful way of showcasing the entire animal.” They plated the lamb porchetta with a side of ratatouille made with vegetables harvested from the garden and more lamb jus.

Just before dessert was served, the team presented a cheese plate with two varieties from Cato Corner in Colchester, Connecticut. “Both are made from Jersey cows milk but distinctly different,” Jasinski says. “The piece to the left hand side is Bloomsday, their farmer’s cheese, and the piece on the right is called Hooligan. It’s aged a couple of months but it has a washed rind.” He recommended eating the farmers cheese first or else the more pungent Hooligan would overpower the flavor of the Bloomsday. The cheeses were paired with Concord grapes and huckleberry compote and crisps. 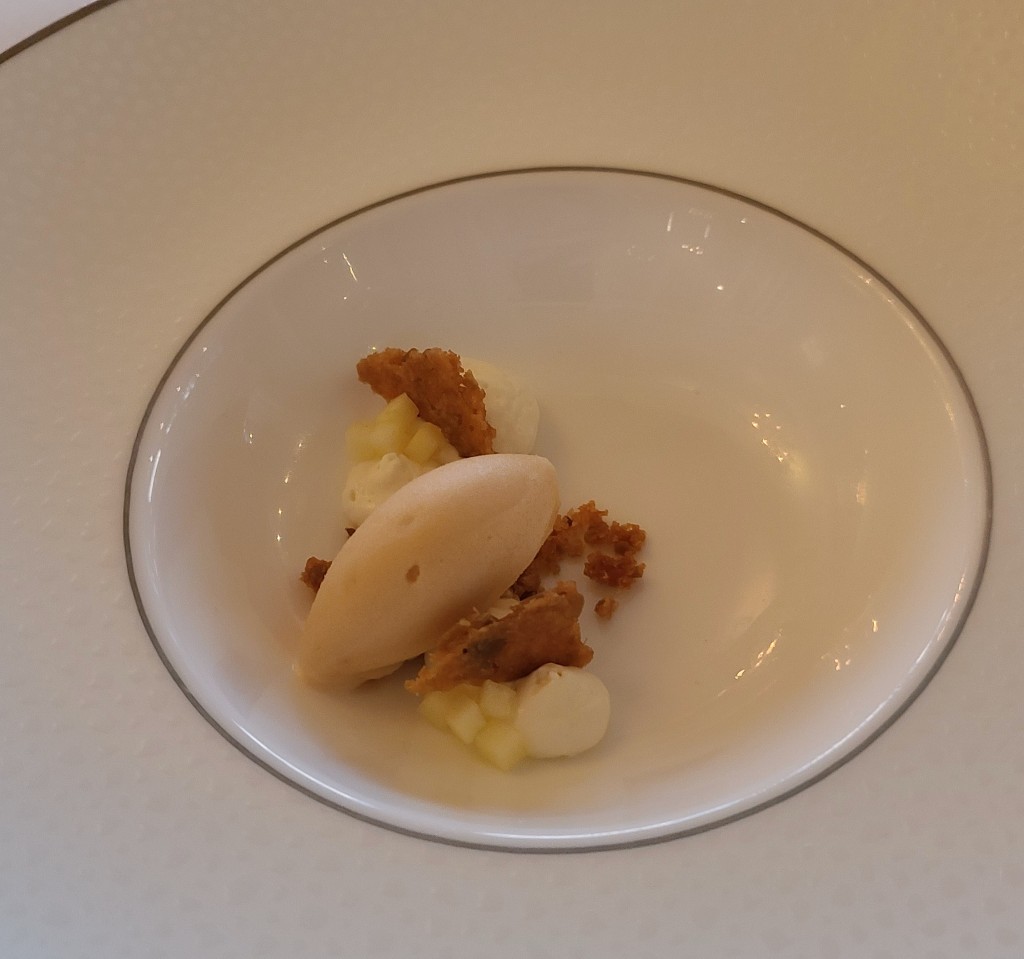 First of the season apple.

First of the Season Apple and Fall Pumpkin

The evening concluded with not one, but two desserts, followed by several handmade chocolate truffles and fresh fruit (so three desserts, yes that’s right!). First of the season apple was served with a dollop of creme fraiche, yuzu and sunflower seeds, and the fall pumpkin dessert followed with a black walnut and cranberry financier cake, pumpkin seeds and Banyuls ice cream from the south of France for the finish. 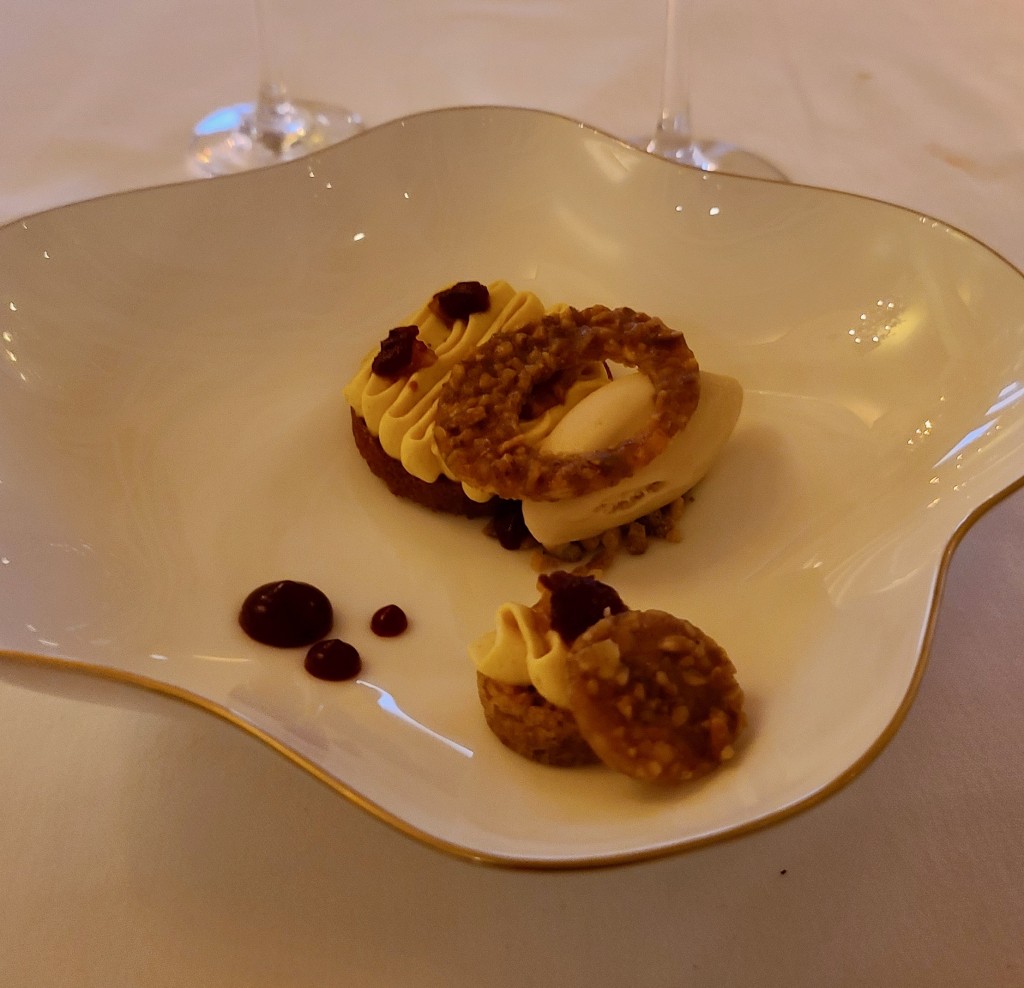 From the Archives: Restaurant Review – Cara