With its creative menu and stunning ocean views, Cara is a worthy successor to the Chanler's Spiced Pear. 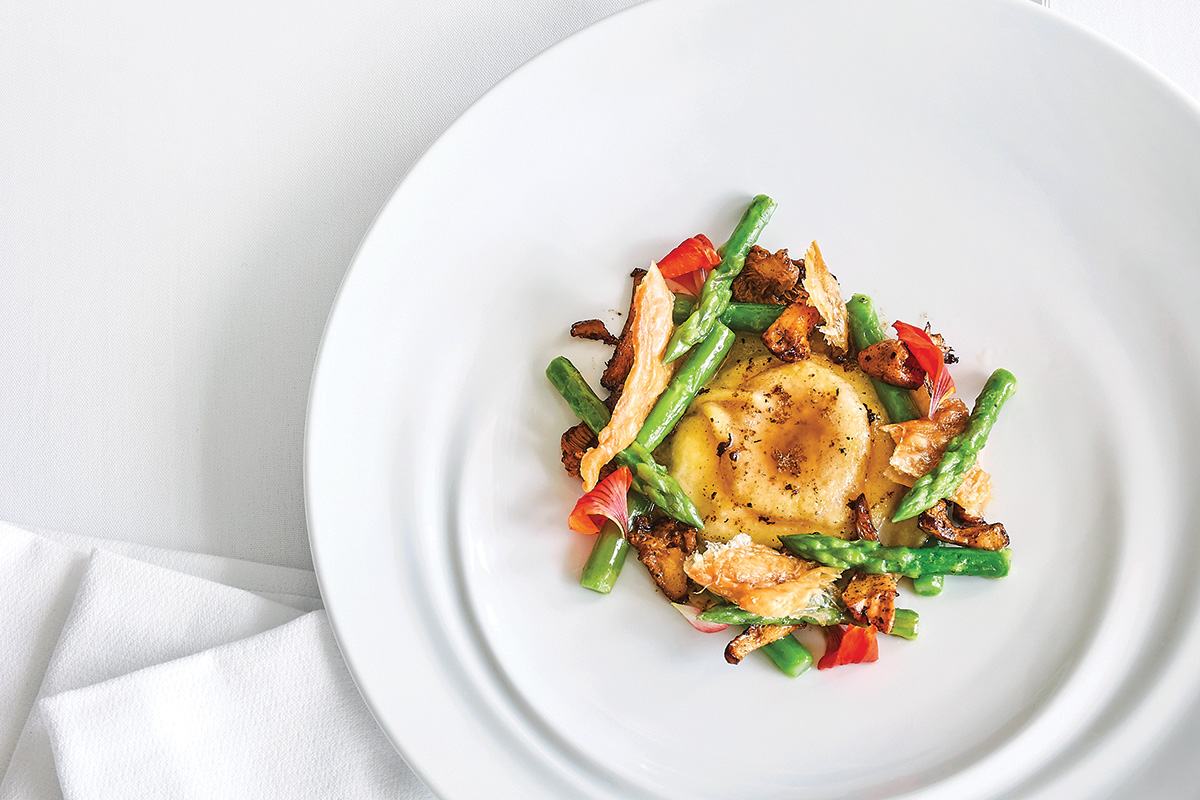 In an age when people enter restaurants in Adidas slides and ripped jeans, one has to wonder whether formal dining has lost its audience. The southern sections of Rhode Island, however — home to the Chanler at Cliff Walk, Castle Hill and the Ocean House — steadfastly assert that a nineteenth century mansion and some oceanside acreage are still hypnotic enough to lull anyone into the romanticism of a meal that spans several hours. And they may be right.

The Chanler retired the Spiced Pear restaurant last year and replaced it with Cara, a slightly (ever so slightly) less formal incarnation of fine dining. The space looks much the same: its dominant color is ivory and its expansive windows overlooking the Atlantic lie in wait for a wedding ceremony. In fact, most visitors are couples and many have come to this culinary pageant to celebrate anniversaries. It’s true that there’s a disconnect between the wardrobe of an oppressively hot summer (“I absolutely can’t do socks in this heat,” says a boisterous visitor in Teva sandals) and the stately marble surroundings. But the Chanler has purposely ushered in a new age by relinquishing brigade service and incorporating modern whimsy into traditional French cuisine. 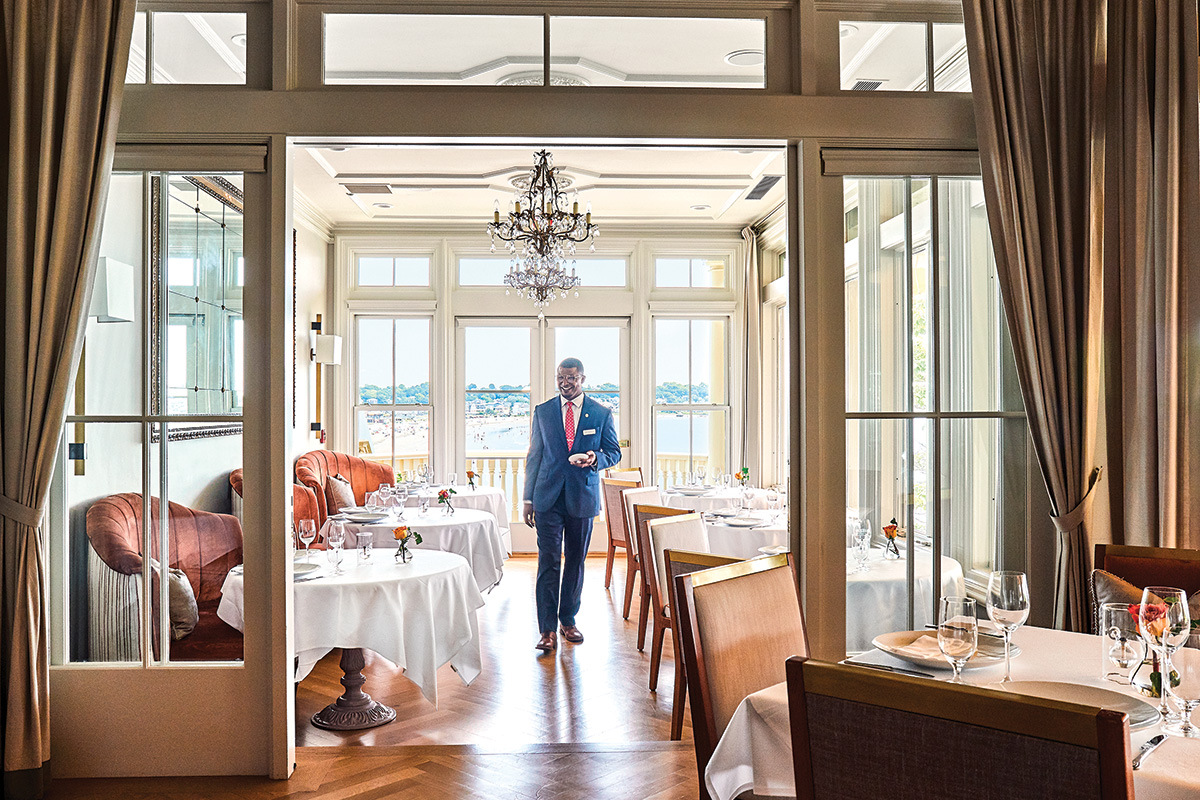 Cara’s dining room is not large — there are all of eleven tables. But nearly every one overlooks the ocean, adjacent terrazzo and sprawling lawn of the summer retreat. Gone, however, are the days when the vista was offered as an elite privilege; this expanse is a promise to the masses that everyone deserves their own slice of the heavens. Cara’s goal is to give just that: a parade of composed dishes designed to elevate the aspirations of (at the very least) eating. It’s no surprise that a server named Fabio comes to discuss the meal, nor that his voice carries the cadence of European culture. Nor is it unexpected that several varieties of bread (Japanese milk, anadama and onion) arrive tableside, presented with silver tongs. But it’s still hard to anticipate what’s to come.

There is a three-course prix fixe ($95) but the six-course tasting menus are more playful and unpredictable. The “forage” option is focused on produce but both menus give themselves entirely to decadence, which inevitably means meat. Vegetarians have few options here and vegans are veritable outcasts. But, oh, what luxury awaits the rest of us. It may be bad strategy to start a show with your strongest look but a quenelle of caviar throws down the gauntlet. It’s served on a barely cooked egg yolk and brioche sandwich, a small tangle of dressed frisee alongside to balance the richness. Time stands utterly still for each of its four bites — a testament to the cliché that caviar can cure all ills. (It can.) 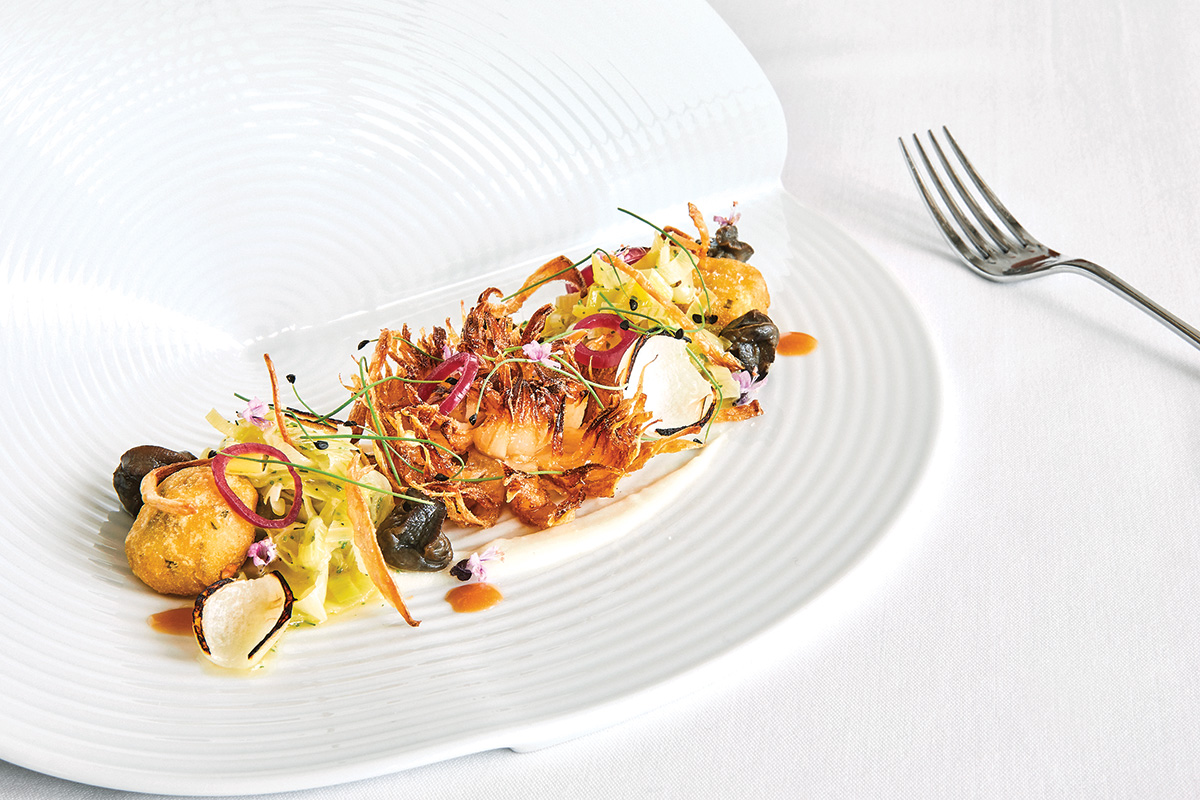 Snow-white burrata and rainbow beets may draw more praise for their flamboyant appearance, but Cara’s rendition of soup is one of the most proficient in its repertoire. In the base of a bone-china bowl lies a layer of undulating onion custard, over which a verdant broth of Bibb lettuce is poured, peppered with the finest threads of bacon. The kitchen clearly has its own way of playing psychological games with its diners as the extravagant course is simply labeled “lettuce” on the menu. What becomes clear after several rounds of food is that this explicitly opulent restaurant holds local agriculture on an elevated pedestal and nothing more so than the humble onion.

A lightly seared, unfurled scallop becomes a serving tray for a pair of delicate oysters and a compote of peppers and sweet onions. The shellfish is barely recognizable in its whittled state, serving as backdrop for the sweet vegetables rather than the centerpiece. Even escargots are hidden in a forest of vegetation, including cippolini onions that are fried into blossoming flowers. It’s hard not to see some humor in the dish, a vague reference to blooming onions in an altogether different stratosphere of gastronomy. 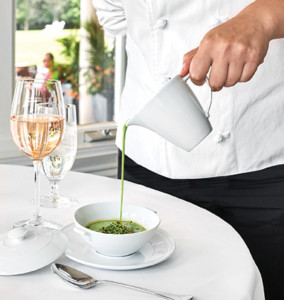 But everything Cara does — and this is a notable difference from Spiced Pear — is self-aware and occasionally ironic. Edith Piaf pipes in through the speakers, ever so French and elevated. Four minutes later, Michael Bolton is asking how he is supposed to live without you. The experience may be firmly rooted in French technique, but American culture is equally on display. Consider, for instance, a single ravioli that follows the soup course. Stuffed with raw egg yolk and goat cheese, it’s an unequivocal homage to European cooking. But then again, it’s covered in a patchwork quilt of fried chicken skin, a clear indication that old school cooking is still willing to visit the new world.

Even the dining experience itself is notably more relaxed than in years past. Couples take selfies at the table and occasionally meander to the window to frame the landscape with their iPhones. Fabio reappears to encourage the approach, declaring that there’s nothing better than good food in a good setting and repeating that everyone should “enjoy, enjoy.” The staff is uniformly demure and affirmative, suggesting half a dozen wine pairings with dinner but quickly agreeing that it might impede your ability to appreciate the surroundings in any kind of sober fashion. Alternatively, there’s always a strip of wagyu beef to intoxicate the senses: a good old fashioned American steak paired up with French truffles and chanterelles.

Occasionally tables do turn over, but most people plan to spend the evening in ownership of a corner and the dream of total fulfillment. It nearly always comes to fruition in the final bites, where fantasy eclipses everything else. Chocolate souffles undulate under the weight of an insistent spoon and a pool of anglaise. Various incarnations of crimson rhubarb are topped with oat crumble and dollops of rhubarb chutney with yuzu custard ­— a panoply of divergent textures. Even a soup bowl of cucumber custard is given vibrancy by way of sweet coconut foam and passion fruit pulp.

If diners think this is the last hurrah, the kitchen begs to differ. Pâte de fruit and orange cello are carried out on porcelain trays and house-made truffles are packed into Cartier-like boxes to remind guests, in later hours, that they temporarily escaped the confines of earth. Fabio may tell you several times over the course of the meal that every effort is “my pleasure, my pleasure,” but that declaration belongs to the diner, long after the meal becomes memory.