We got a taste of the classic, the hip and the new kid on the block: Pomodoro, Pizza J and Pizza Marvin. 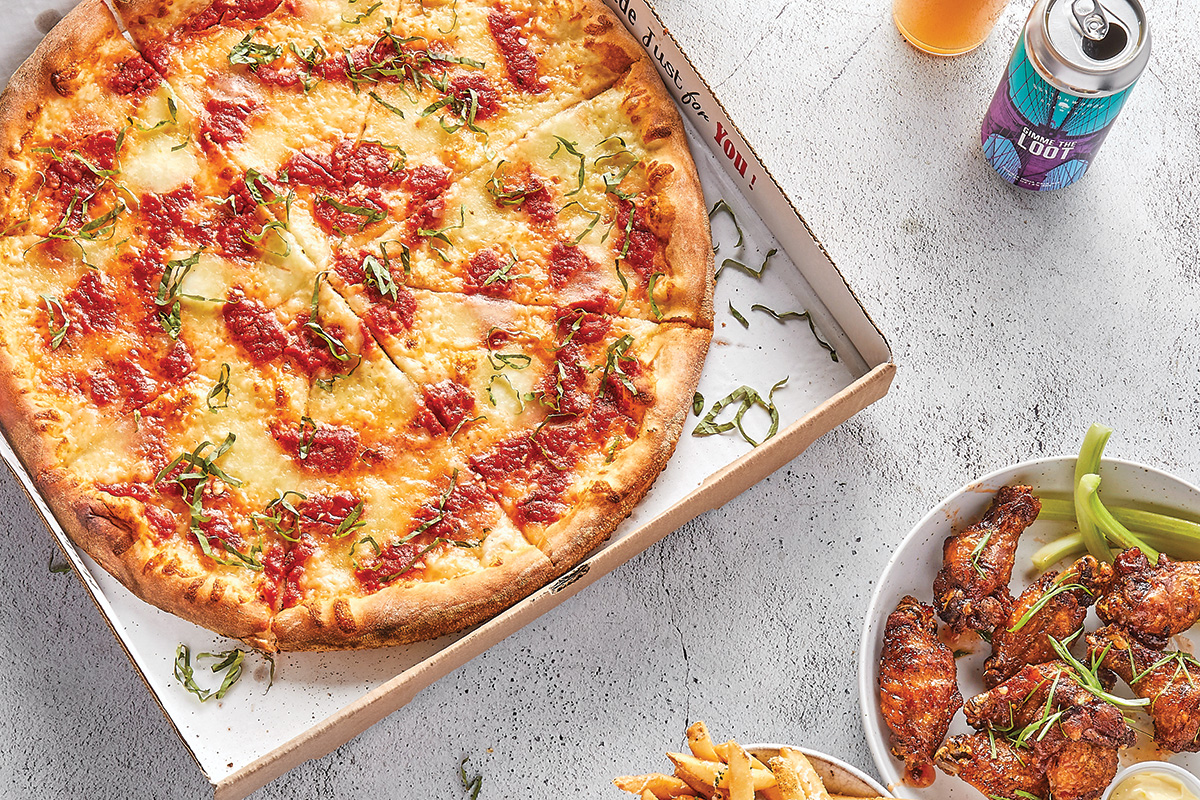 Pizza J is a beer hall that decided pizza was the perfect food to complement its copious beverage list. Like its sibling restaurant, Julian’s, it’s full of quirk and spunk and wholly believes that life is better with a buzz. This is all obvious from the descending disco ball, the occasional He-Man figurines, and the creeping Creature from the Black Lagoon that hangs out in the entryway, daring you to treat adulthood as if it’s fun.

Even the takeout menu lists booze alongside food to set the mood; it’s stacked with beers that identify themselves as dank, dense, funky and having horse blanket notes. (That’s a $25 Oude Beersel oude Geuze, for the record.) But if the liquor list reflects Pizza J’s eccentric side, the menu is its straight man. The most domineering flavor is garlic, which covers fries and pizza and infuses aioli, and is a pretty good indication of the restaurant’s self-confidence. (“If I reek like garlic,” it smirks, “that’s your problem.”) 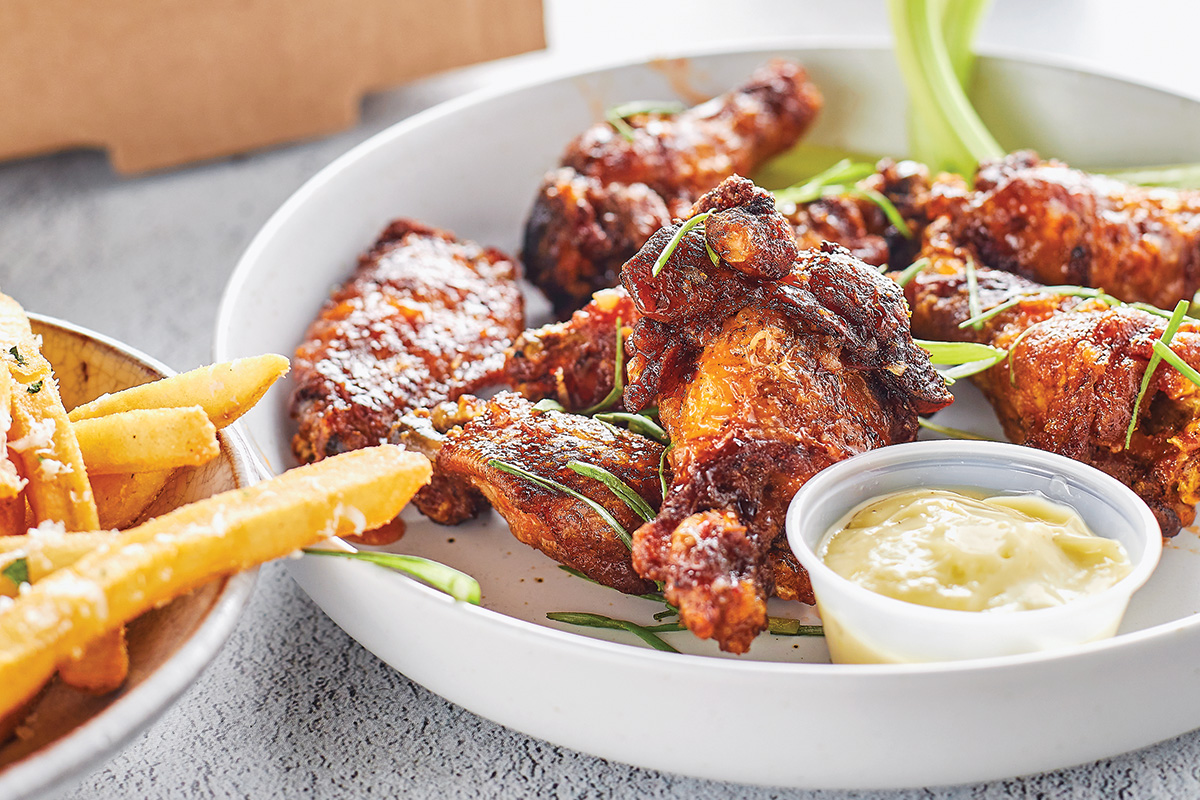 There are plenty of aggressive add-ons: smoked wings in whiskey-cola sauce ($10), a fried chicken sandwich with a haystack of ranchy slaw. But the garlic fries ($8) are the anchor, tossed in parmesan, double-doused in garlic aioli and painfully hard to put down. All of which makes the somewhat delicate pizza a surprise. The brick oven crust is chewy and charred but the interior is so light that downing an entire pie seems like a legitimate approach. The kitchen is particularly good at tossing on little things that bite big: scallions, black pepper, handfuls of herbs and — naturally — heaps of garlic. In anything-but-pandemic times, Pizza J also caters to the vegan crowd in an overt way. Seitan wings are a staple, and, when sit-down dining is an option, so is the wall of pinball machines. Another bonus? Pizza J has one of the best soundtracks in town. 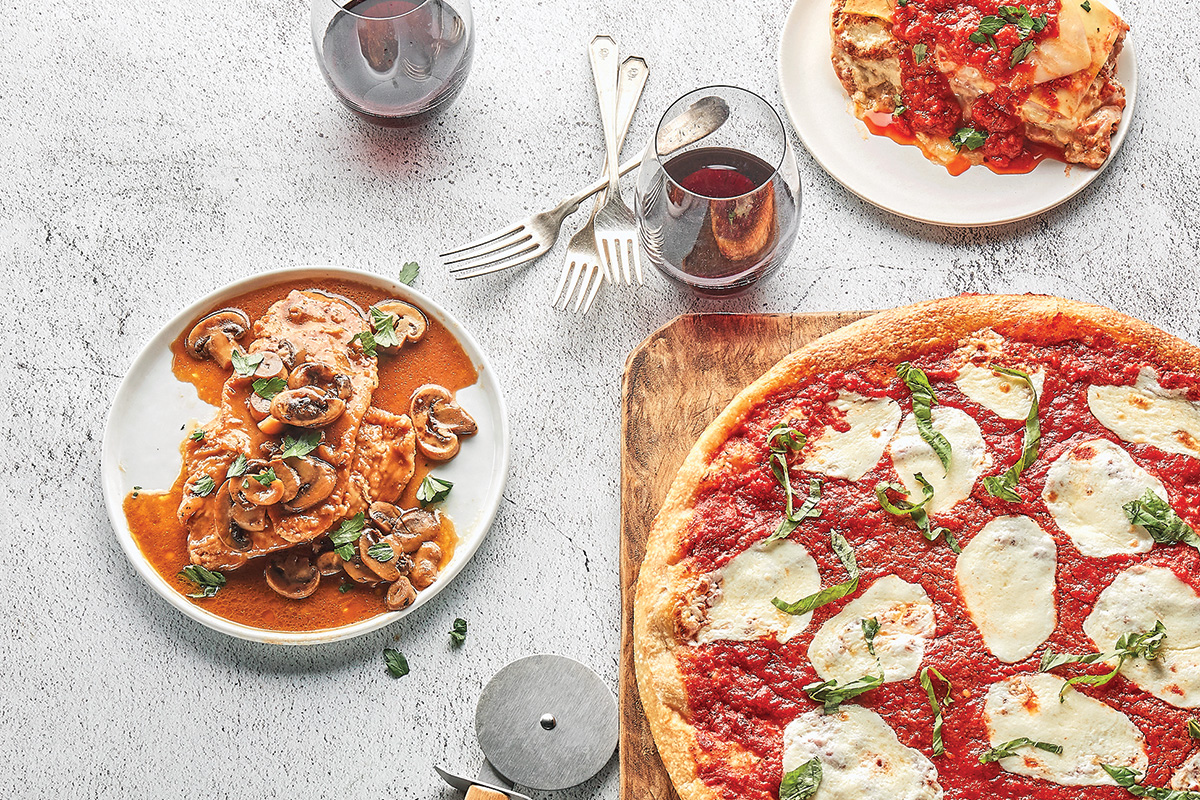 The Pomodoro pizza with Mama’s Lasagna and chicken Marsala. Photography by Angel Tucker.

Pomodoro brings maternal instinct to the pizza game, eschewing technology and shock value for a traditional take on old school Italy. Orders are placed by phone, forcing every customer into speaking to a live person — an unfamiliar endeavor by today’s standards. Owners Tina and Michael Micheletti run a family business and have built everything to feel that way: Order once and they’ll know you by name. The space itself is intimate by any standard. When indoor dining is available, just a handful of seats are split between tables. But anyone who grew up in an Italian home knows that affection isn’t contingent on surroundings; it emanates from food. 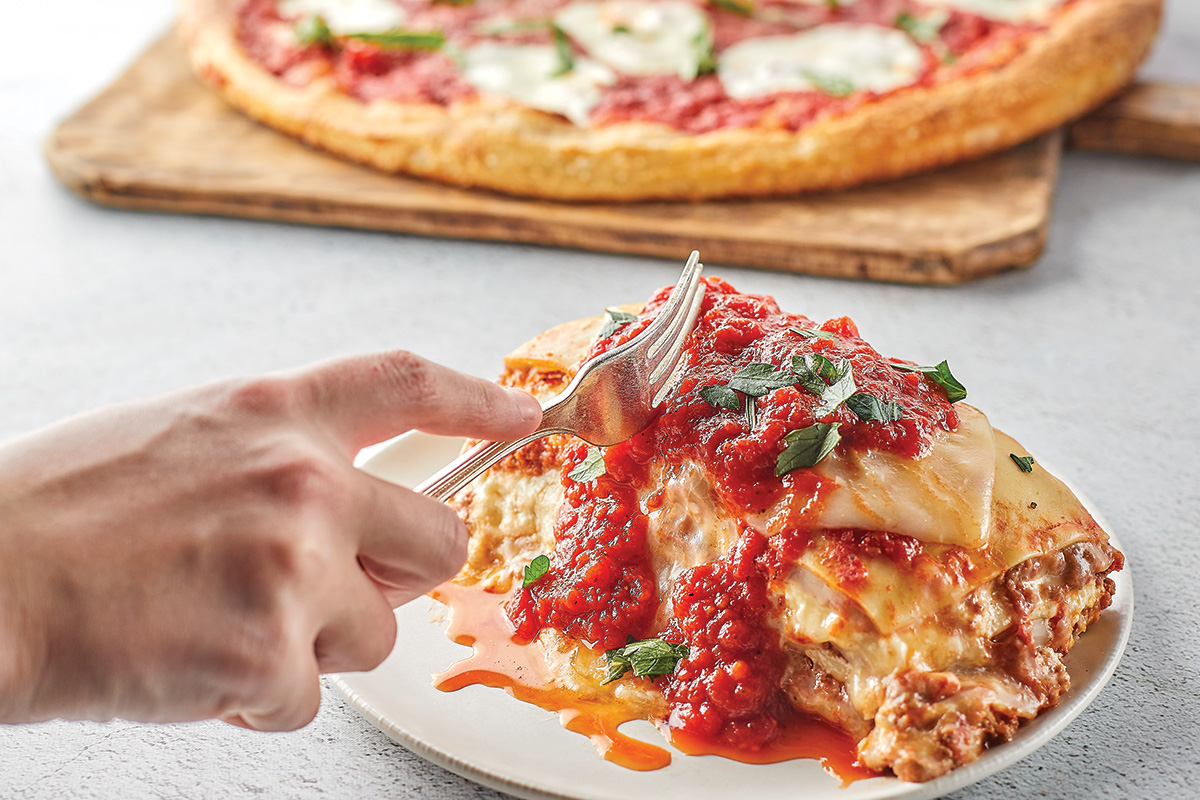 Pomodoro pizza has a homemade chew to it, somewhere in between blackened Neapolitan and a chewy New York City pie. It’s a cheesy version that recognizes the American perspective (shredded mozzarella, $13) but saves its namesake pizza for freshly sliced cheese and San Marzano sauce ($17). Most renditions are laden with old school favorites: artichokes, sausage, pepperoni, spinach as well as a stateside amalgam of fried calamari, hot peppers and garlic butter ($23). But Pomodoro wants every meal to taste as if it came out of a corner cafe with Chianti bottles covered in straw and Frank Sinatra playing in the background.

The menu is rich with burrata ($17), gargantuan gnocchi coated in vodka sauce ($16) and large wedges of lasagna ($14). No wonder it’s a perennial favorite tucked away in Bristol. It’s a vestige of what we’ve lost: a place where your dinner is offered like a gift and gladly accepted. Despite a restrictive year, the Michelettis are still hard at work proving that restaurants are the corners of our world that make us feel most at home — even when we’re taking out. 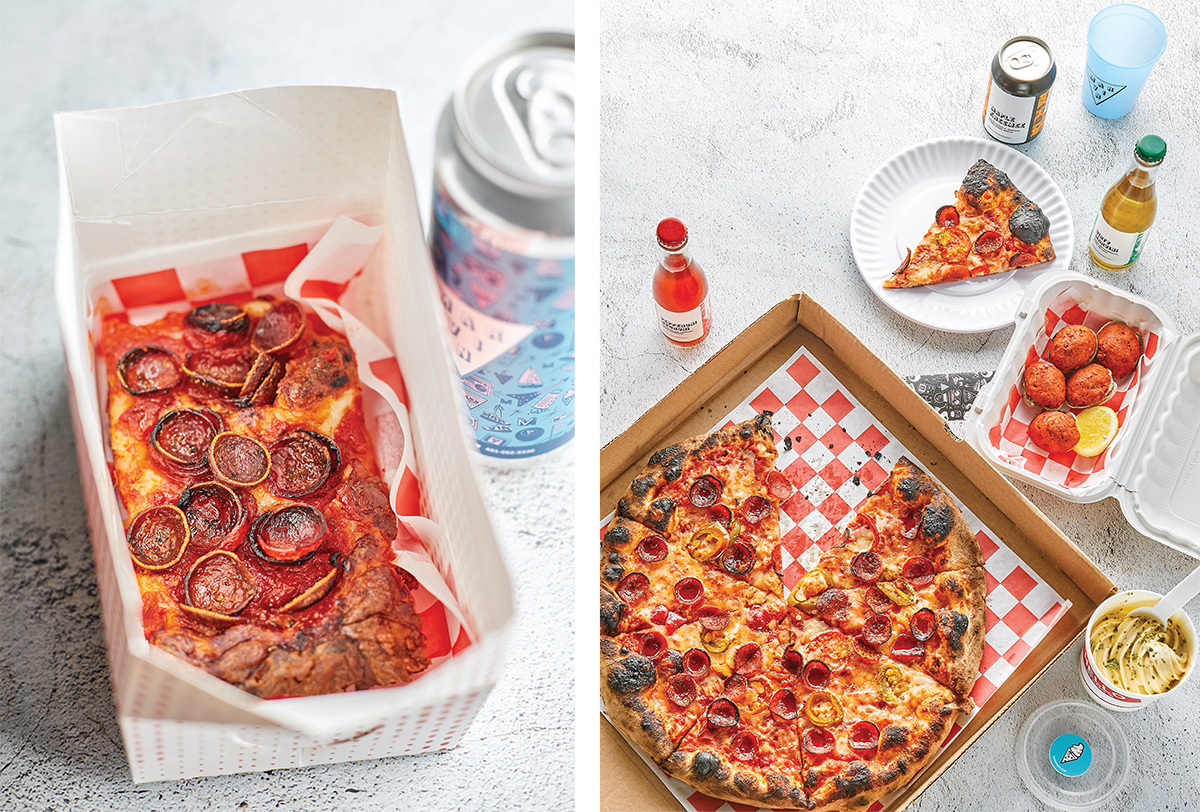 rom any angle, Pizza Marvin is a badass. Its throwback logo is both hipster and retro; rock music plays at brain-jiggling levels through the evening; drinks run the gamut from pepperoni gin to maple-mixed tequila. In addition, owners Robert Andreozzi and Jesse Hedberg marry Italian heritage with Rhody culture in a way that brings everything up a level when it comes to cool.

Image aside, Marvin could readily rest on its pizza laurels: the blackened, bubbled crust of its New Haven pies is chewy and so deeply charred that you’ll think you’ve finally tasted the essence of fire. Its paper-thin base showcases a dozen combinations, from potato and rosemary to pancetta and Brussels sprouts, as well as the heralded pepperoni, hot pepper and honey pie ($22). Every bite of every version is assertive, but they’re often referential as well. Marinara pizza comes with a thick tangy sauce that reinvents the native pizza strip as its chain-smoking, hard-drinking older sister. Turns out, Rhode Island is a source of pure pride in this corner parlor, so much so that Andreozzi has incorporated local clams into every dish he can. They’re piled on pizza with pancetta, packed into dip, and chopped into stuffies with plenty of spicy nduja ($12). The kitchen also serves up a pile of fries doused in meat sauce spices and served with a celery aioli ($8) — all hail New York System, even in a pizza joint.

But Marvin never forgets its trans-Atlantic roots. It may be a couple of miles from Federal Hill but it pays a similar homage to the wave of immigrants who came from Italy and offered their culinary identity to New England. Broccolini, arugula and escarole make a lively appearance for the old school diners. But the most unexpected bite of the night is a cup full of tangy tangerine Italian ice covered in focaccia gelato. It’s a pairing so sublime that it’s best to down one as a palate cleanser between pizzas and another as dessert to punctuate the meal. If you thought you’d get away with a quick slice on the run, think again. This is how obsessions start: one blistered bite at a time.