The artist-and-musician-turned-bartender is able to pursue all of her passions while also handcrafting her own spirits. 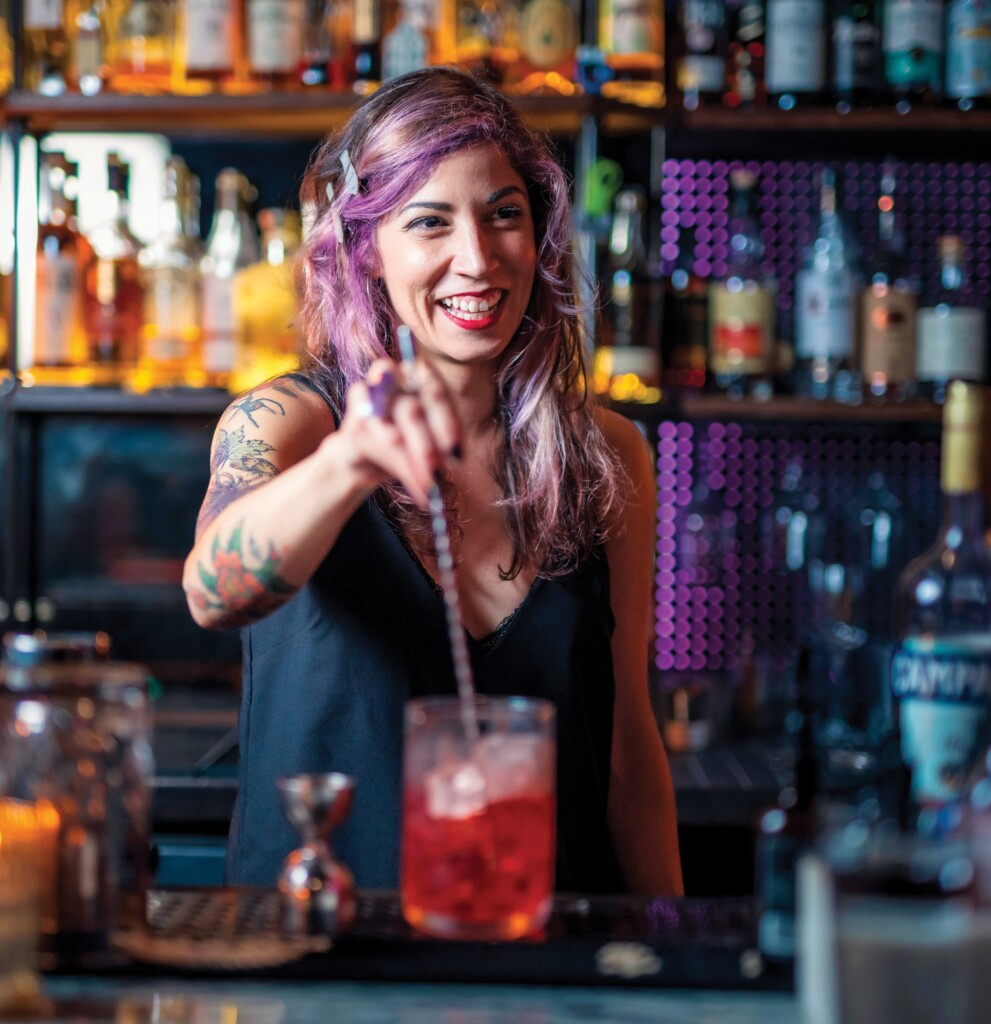 Some people take up bartending in order to pursue a primary career. But sometimes that side hustle ends up becoming a bonafide passion. Laura Ganci, who has a background in fine art and music, took up bartending to support her other talents, but she ended up falling in love with it. She’s now the beverage director at Courtland Club in Providence, a place where food and drink, art and music collide with diverse programming from jazz night to deejays and a constant appreciation for art and photography.

The job allows Ganci to do all of the things she loves. “I fell into working in restaurants for the same reason a lot of people do, which is because it worked really well with a gig-economy lifestyle. It was the thing that allowed me to pursue other interests and had flexibility,” Ganci says of her eight years spent in Boston learning about craft cocktails working at Scholars, jm Curley and Brassica Kitchen. “As my skill level expanded, I started really enjoying it and saw it was a really wonderful way for me to express my creative side in a different arena.”

She says Brassica was a unique experience because the bartenders prepped right next to the chefs so there was a constant dialogue on how to repurpose byproduct. There she learned how to make vermouth and gained an interest in producing her own amaro. “It’s really an intersection of medicinal herbs and understanding their properties and how they can be helpful,” she says. “It bridges the gap between the dark underbelly of what I do, which is essentially doling out alcohol, but doing it with the rich interest in herbs and culture.”

Ganci is known for creative spirit-making and cocktail menu ingenuity. She creates a seasonally-driven seven-cocktail list each month at Courtland Club. Each month spotlights a Zodiac cocktail with flavors based on individual signs. This month, the Sagittarius involves pisco, orgeat, banana, fernet and lime, served on the rocks.

The musician-and-artist-turned-bartender handcrafts her own spirits, including a coffee liqueur and amaro. Depending on availability, some of her custom spirits might be incorporated into drinks on the menu. She comes from a Sicilian background and explains how some Italian families curate their own amaro recipes. “It is a bitter Italian spirit with a neutral base. Essentially, you make an herb mixture and every family, every Amaro house, has a different recipe,” she says. “A lot of the recipes you can’t find because they hold them as family secrets.”

Her recipe is continuously evolving and can feature various dried herbs like chamomile, angelica, cassia bark and rhubarb root. She is also known to repurpose handcrafted syrups from other cocktails to transform the amaro flavors.

She often enlists her boyfriend in the process. He’s an avid gardener, and they are experimenting with various homegrown herbs. “We have been trying to get very scientific about it and figure out what herbs are imparting what flavors,” Ganci says. “He just did a test batch of single herb infusions. I’m trying to get nerdy with it.”

It takes a minimum of two weeks to craft one batch of amaro, so it is a very rare and painstakingly made treat, indeed. Ganci aims to one day produce it on a larger scale. “It is a very special thing and it’s not always going to be available. It also depends on what herbs I am able to get,” she says. “There is a demand for it in a way that allows me to create more and more and maybe make it a larger part of my life.”

While bartending, Ganci is pursuing her other passions. She is preparing for a big art show in Boston that involves a sound installation in February. Her grad school work involved sound installation where she would assign speakers with different voices and set them up in a space.  The show is called “the Hour of Lead,” and it includes a handpicked group of people from her cohort from MassArt, where Ganci earned her MFA in 2018. “The show is an artist’s response to Covid, but specifically around the scenes of grief and sort of how we all have individually moved through that time.”

Unfortunately, Ganci lost her dad to Covid the first week of lockdown and her piece incorporates an interview that she did with him before he died. “It’s sort of like a memorial but it’s not necessarily just for him or me or my family; it’s more about sharing in this collective vulnerability of grief,” she says. “Something that might be deeply personal to me could become deeply personal to someone else because it’s triggering a memory or they are pulling words out that they can relate to, and subsequently, it’s guiding them into their own experience.”

Ganci also performs with her twin sister, Nina Ganci, in their band American Echoes. They have a show coming up on December 29 at 8 p.m. as part of the Gamm Theatre’s Ghost Light Stage concert series, featuring the sisters’ influences on rhythm and blues and folk. They will also perform as part of First Fridays for Ganci’s art show in March. She’s thrilled to have her many interests collide for these experiences.

It makes sense that she’s the beverage director at Courtland Club. It’s a place where good food and drink, music and art intermingle, and each cocktail is represented like an art form.

She’s serving up masterpieces in a glass.