The city's most luxurious hotel yet is opening the Cipriani-branded Bellini restaurant as well as a private rooftop club. 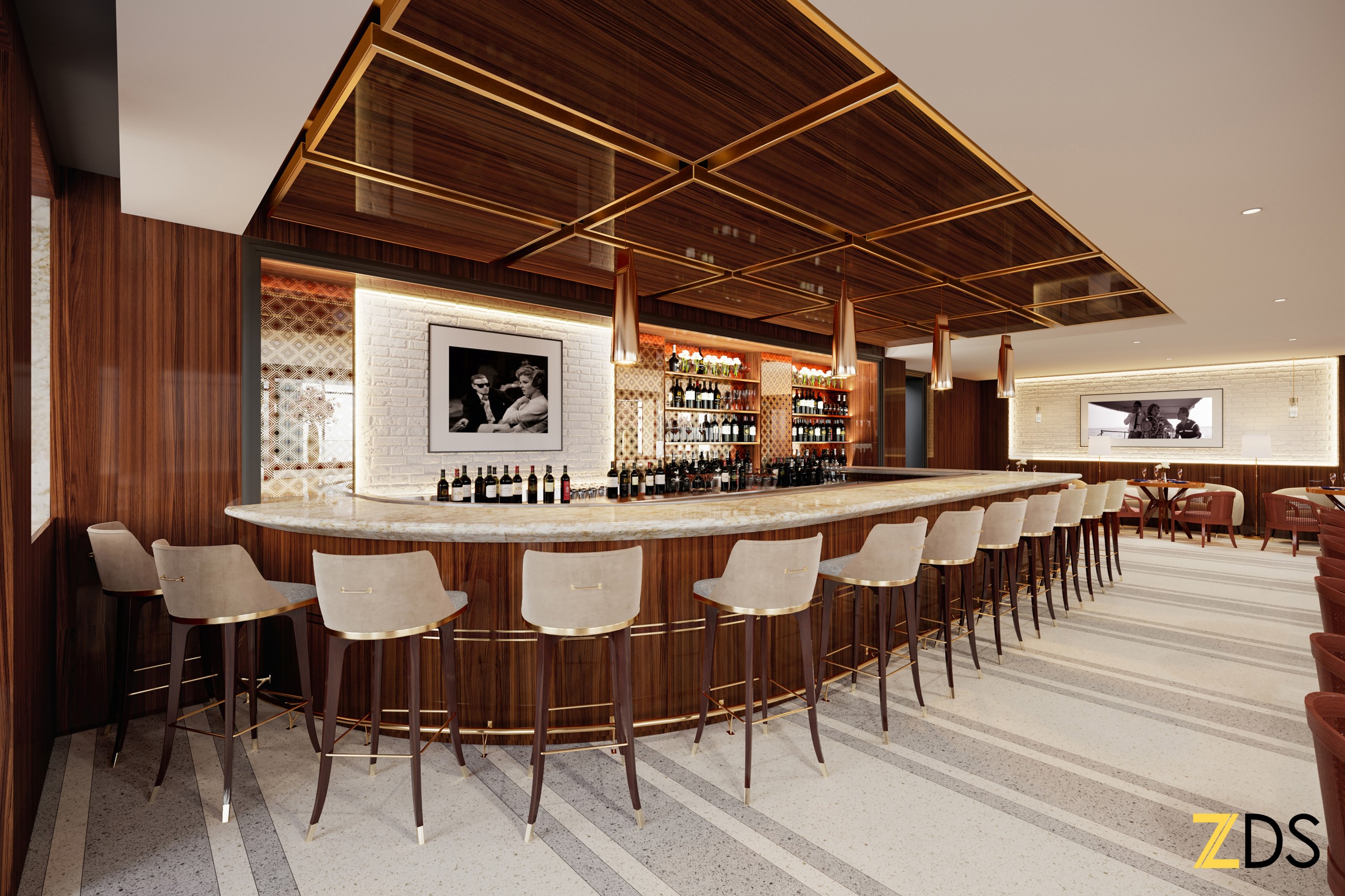 Inside Bellini restaurant. Photos courtesy of the Beatrice.

What do New York City, Miami and Ibiza all have in common with Providence?

The cities all have the Cipriani stamp on them. Providence is welcoming the city’s most luxurious hotel yet: the Beatrice, complete with a Cipriani-branded restaurant, Bellini, which will open soon after. The high-end hotel accommodations are the latest project of former Providence Mayor Joseph Paolino Jr. of Paolino Properties, who named the hotel after his late mother, Beatrice Temkin. She was a Rhode Island resident, community leader and philanthropist (and also — shameless plug — the society editor for Rhode Island Monthly), and the hotel is inspired by her timeless and elegant style.

To make the hotel even more alluring, Paolino teamed up with Ignazio Cipriani of the world-renowned Cipriani family, to open Bellini restaurant as well as a private rooftop club on top of the Beatrice. 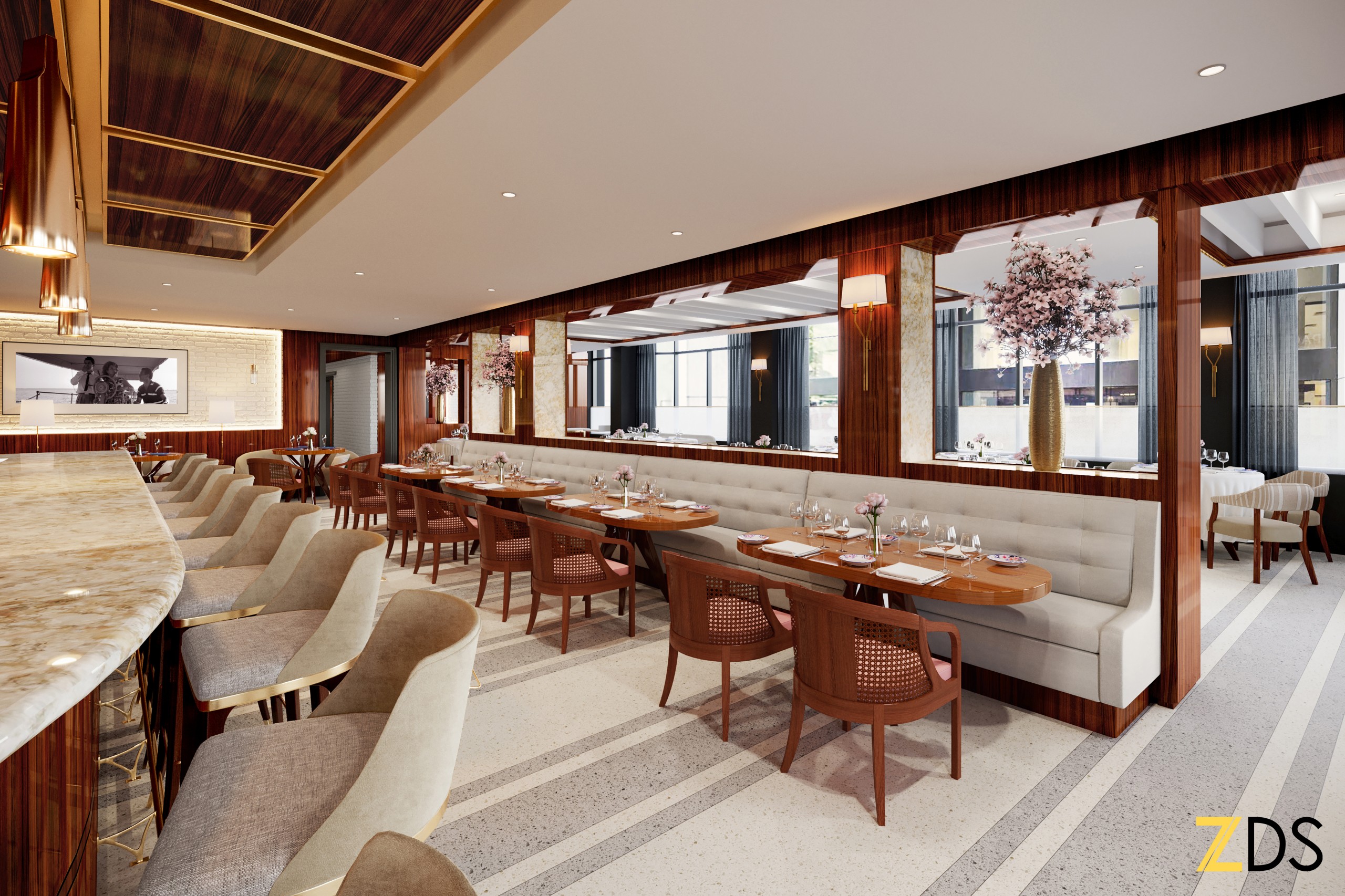 “The Cipriani family is in some incredible, impressive places. When they first came to Providence to tour and look at the property, being from Venice, there was a big connection between the city of Providence to Venice, Italy, with the river running through the city,” says the Beatrice’s general manager, Jennifer Curtin. “It felt like a natural fit for both parties.”

In 1948 at his famous Venice-based Harry’s Bar, Ignazio Cipriani’s great-grandfather, Giuseppe Cipriani, invented the bellini cocktail, a mix of Champagne and peach puree inspired by Venetian painter Giovanni Bellini. He also inadvertently created what is known as carpaccio — thinly sliced raw sirloin — when one of Harry’s Bar’s patrons, the countess Amalia Nani Mocenigo’s doctor had recommended that she eat raw meat. He named the dish after the Venetian painter Carpaccio. 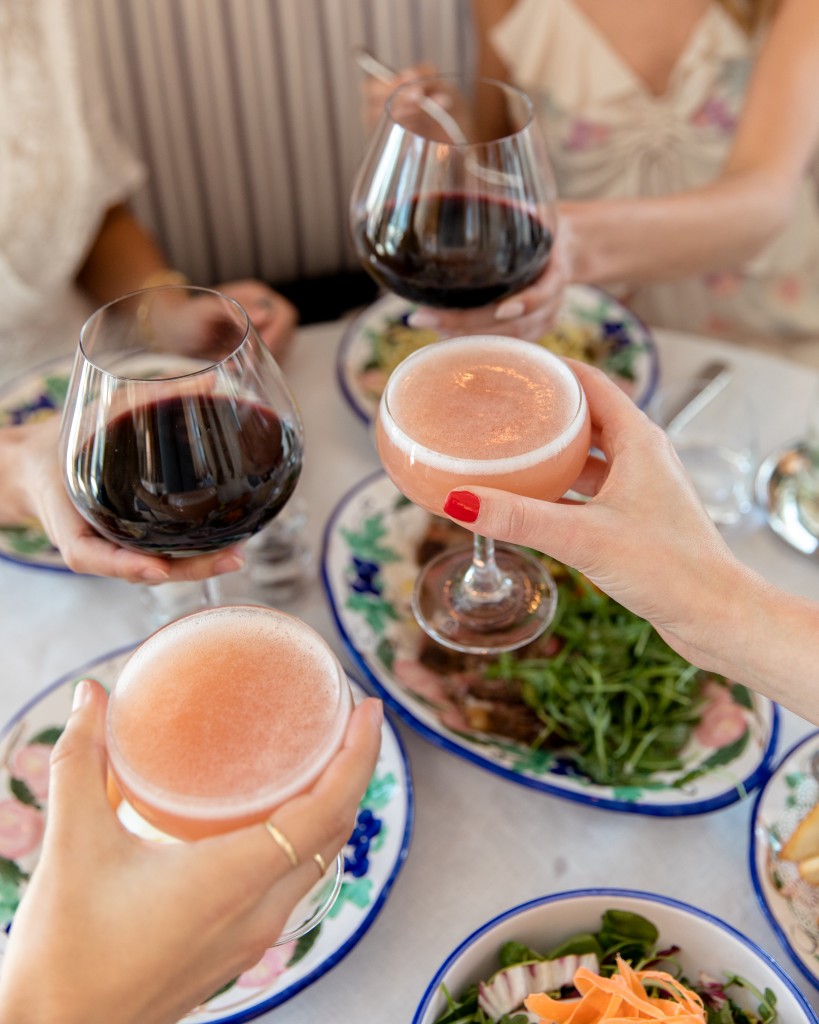 The high-end Italian restaurant will be the first Bellini location in the New England region launched by Ignazio Cipriano, who named it after the Bellini cocktail. The Paolino family became familiar with the Cipriani brand in their travels, and successfully recruited the family to launch their next restaurant here. “Whether in Europe, New York City or Miami, it’s always been a brand they’ve gravitated to just knowing that they’ll always have that incredible experience,” says Curtin. “Another neat connection is that Paolino Properties is a family-owned business as is the Cipriani business, as well as the management company Main Street Hospitality Group, so there’s a special touch that comes with being run by generations of the same family.”

The rooftop club will feature members-only access and be open to hotel guests. It will have indoor and outdoor space with French doors that open up to the city’s skyline views. “It will feature high-end dining and cocktails as well as shared plates. Food will come from Bellini restaurant,” Curtin says. “It’s something new and fun, a reason to do a whole night out in the city.” 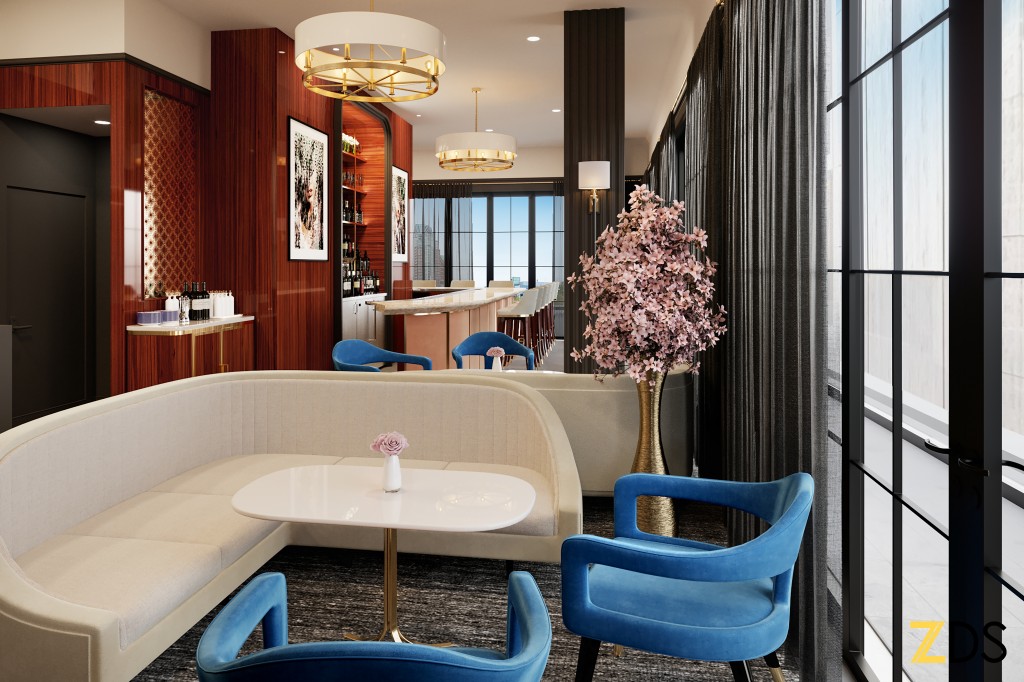 The Rooftop Club at the Beatrice.

The rooms inside the Beatrice are equally as upscale. Classic and Grand rooms are outfitted with either a King size bed (Classic) or a King or two queens (the slightly larger Grand room) filled with deluxe amenities including Mascioni linens and towels crafted in Milan, Dyson hair dryers, organic BeeKind personal care amenities, heated towel racks, Nespresso coffee makers and more. There is also a penthouse suite called the Barton Suite, named after the street where Joe Paolino Jr. grew up. The two-room suite is decked out with a private living room with a sectional couch, fifty-three inch TV, entertainment center and half bathroom as well as a private, king suite with city views, a desk and full bathroom. Guests also have the option to connect five rooms on the fifth floor. “You can connect that entire wing of guest rooms, which makes it a very exclusive part of the hotel, if someone wanted to rent out that whole section,” Curtin says. 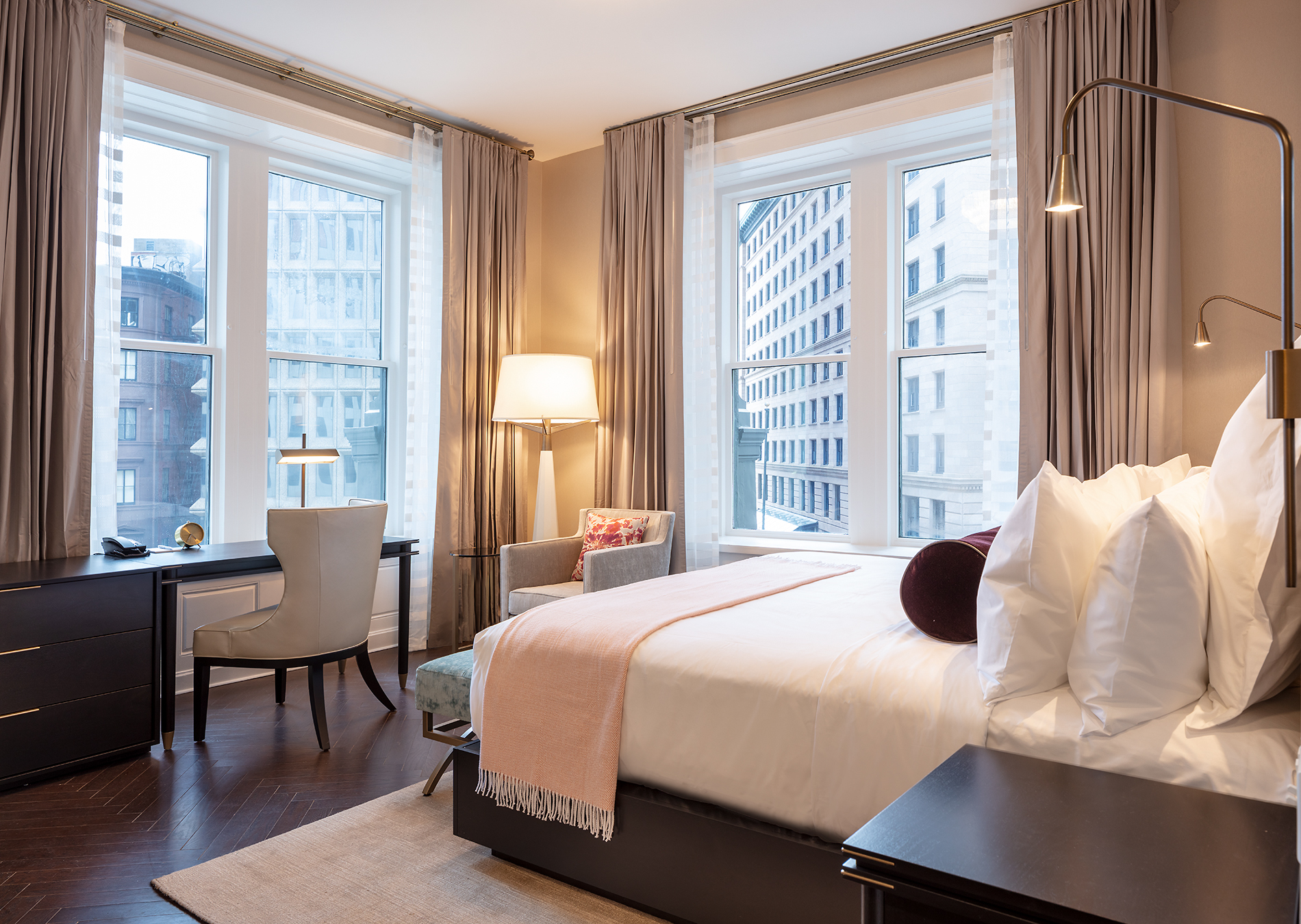 A room at the Beatrice.

Each room has an elegant look and feel, just like Beatrice. “We’re really excited to take the city to a new level with luxury hospitality. Everything in the room is well thought out with high-end products, tying back to Beatrice herself,” Curtin adds. “She was an elegant, sophisticated woman, so that’s really where all the design choices and elements in the rooms stemmed from.” 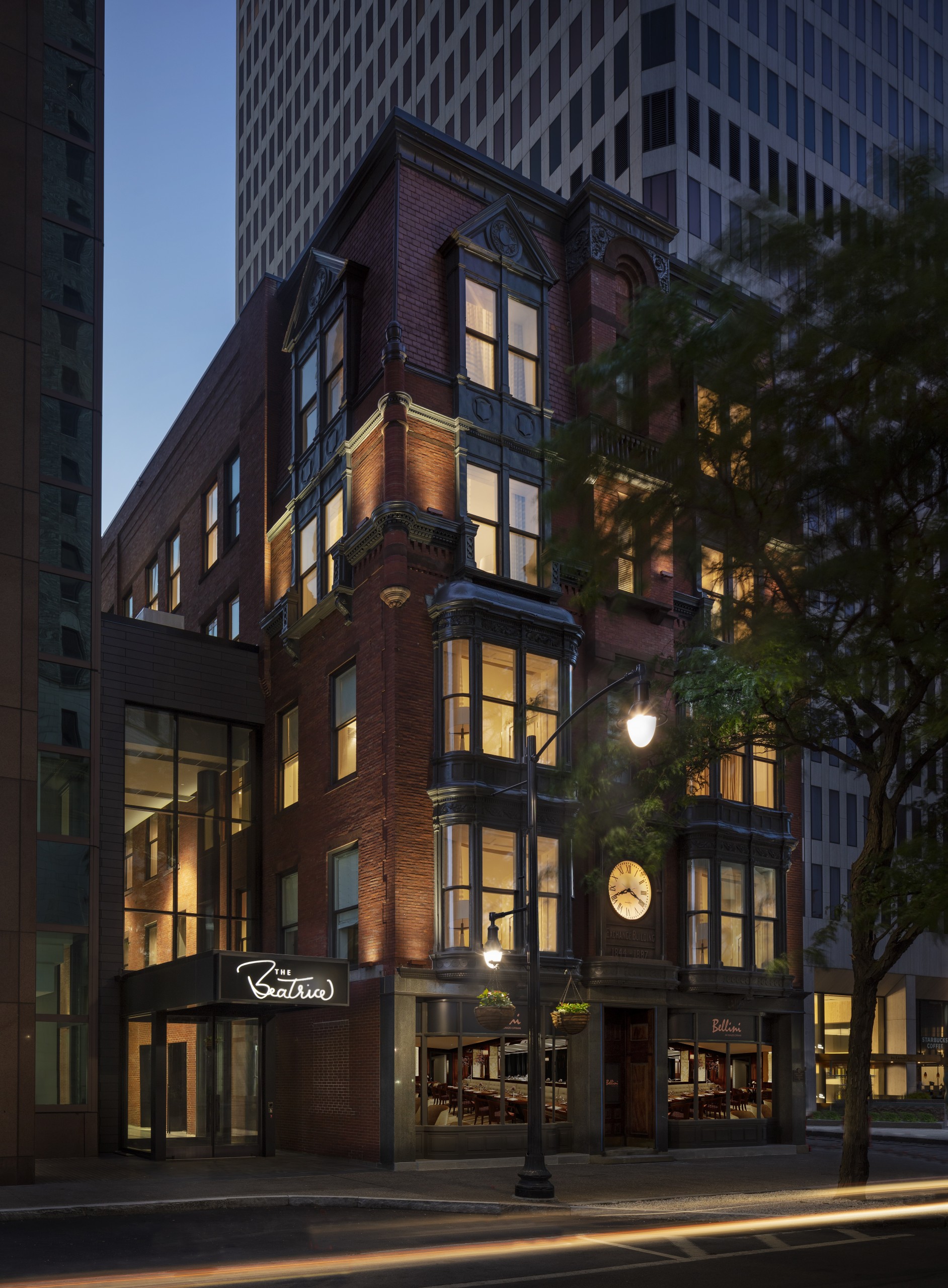