Celebrate the 250th Anniversary of the Gaspee Affair at These Events

Rhode Island never got its due for kicking off the Revolution, but the state sure knows how to celebrate in style. 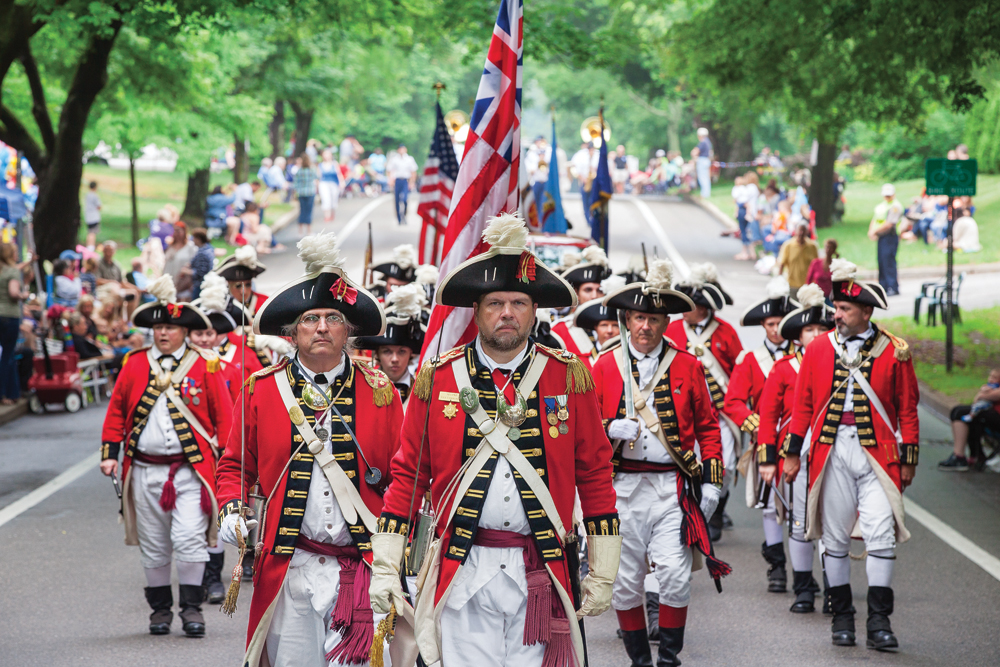 The Pawtuxet Rangers march down Narragansett Parkway during a past Gaspee Days Parade. (Photo by Alexander Nesbitt)

Oh, Rhode Island. Last in so many things, and often overlooked by the many Americans who would rather leave us off the map than carve our tricky shoreline out of the New England coast.

We patiently field questions about where our state is located (I swear, it’s not part of New York), but we put our foot down when it comes to celebrating our role in kicking off the American Revolution. As most Rhode Islanders know, local colonists burned the British schooner Gaspee on June 9, 1772, a full eighteen months before our neighbors to the north dumped tea into Boston Harbor. It was the first act of armed rebellion against His Majesty King George III, and an important turning point in relations between colonists and the British crown.

While the rest of the country might not be partying it up in honor of the event’s 250th anniversary next week, Rhode Islanders are certainly commemorating the crucial day. Here’s a roundup of ways to learn more about the Gaspee Affair and remember its long-lasting place in American history.

The Gaspee Days Committee will continue to preserve Rhode Island’s Revolutionary legacy with a 250th anniversary edition of Gaspee Days in Pawtuxet Village. The highlights of the festival — the annual Gaspee Days Parade and reenactment of the burning of the Gaspee — take place next weekend, but the celebration offers more than a dozen events stretching over three weeks. Other ways to commemorate the Gaspee Affair include a road race, colonial encampment in Pawtuxet Park, fireworks and the Blessing of the Fleet. The full schedule is available on the Gaspee Days Committee website. Here are a few dates to remember:

For a behind-the-scenes look at the Pawtuxet Rangers who march in the parade, see Casey Nilsson’s story in our archives here.

For the historian types, Gaspee: The Spark that Ignited the American Revolution, on view at the State Archives through July 8, offers an inside look at the artifacts that played a central role in the original event. Items on display include the letters leading up to the fateful attack and an example of the pistol that would have been used to shoot Gaspee commander William Dudingston, who survived. No one was ever prosecuted, but State Archivist Ashley Selima says the incident was known more widely then than it’s remembered today.

“One of the things we talk about in the different essays for this exhibit is the fact that Thomas Jefferson cites some of what came out of the Gaspee Affair in inciting part of the Revolution,” she says.

Many of the state’s Gaspee materials are digitized and available online, as well as educator materials for teaching Gaspee history to students. Visit the Secretary of State’s website to learn more.

Symphony in the Park

In partnership with the Gaspee Days Committee, the Warwick Symphony Orchestra will offer an evening of music in Pawtuxet Park prior to the fireworks on June 4. Grab your beach chairs and blanket and settle in for the summer festivities. Beer, wine and food will be available for purchase and help defray the cost of reenacting the burning of the Gaspee. Opening acts begin at 5 p.m., and the orchestra takes the stage at 7 p.m.

Did it even happen in Rhode Island if there’s not a Frog and Toad T-shirt about it? The gift and screen-printing shop joined forces with the Rhode Island Historical Society to produce a classic rock-inspired T-shirt series centered around historic Rhode Island events, including a Led Zeppelin-influenced take on the Gaspee Affair. According to RIHS Director Sarah Carr, it’s a new way to bring attention to the important event. And it’s a shirt you can feel good about wearing — all proceeds benefit the RIHS. (They also have a Sex Pistols-inspired “God Save Rhode Island” T-shirt featuring King Charles II, who granted the colony its charter in 1663.)