This new family-owned coffee shop in Rolfe Square offers made-from-scratch pastries, specialty coffees and sweet and savory breads, all with a Latin twist. 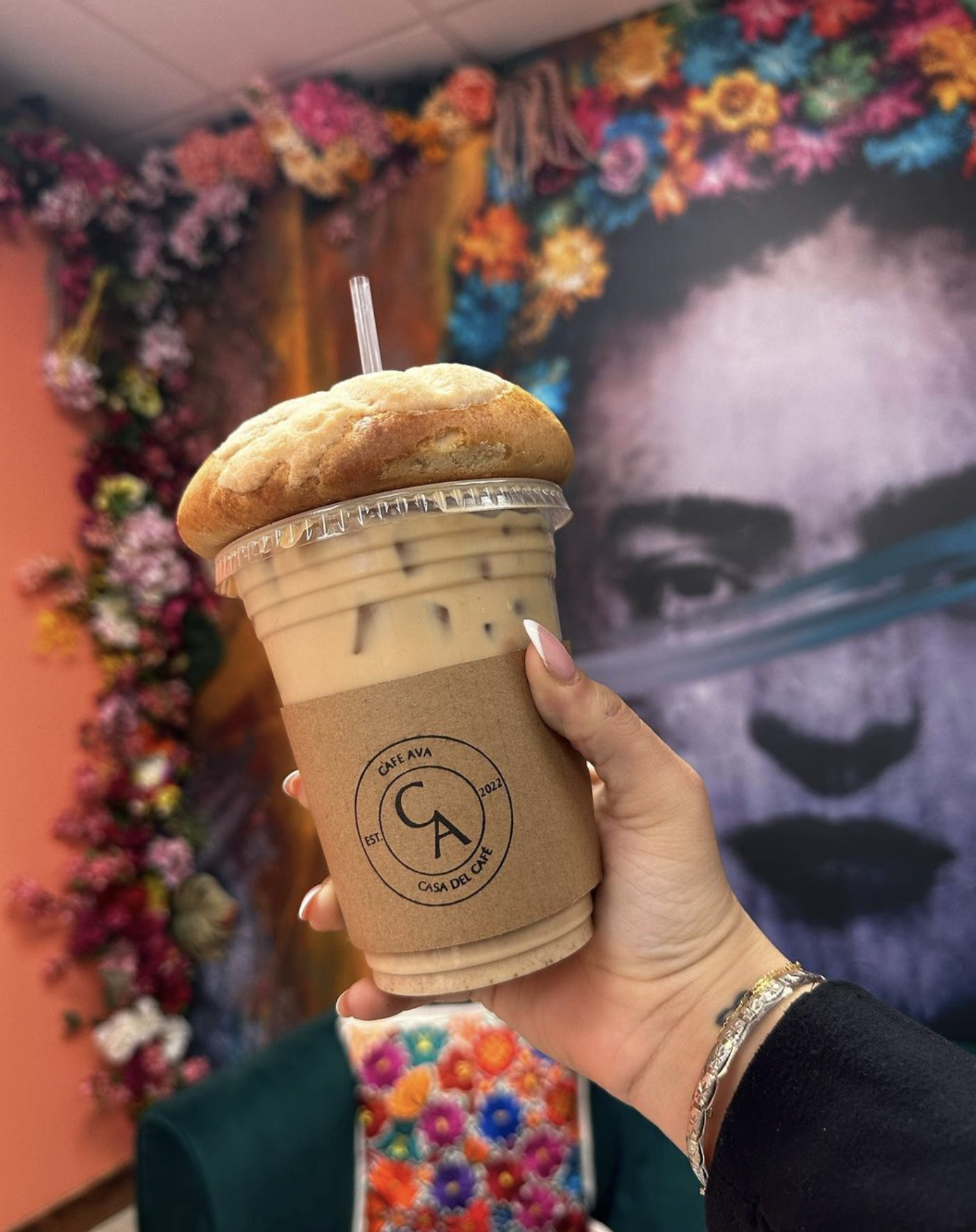 Cafe Ava in Cranston serves fresh pastries and espresso bean-based lattes (like this horchata latte topped with a sweet bread roll called the concha) for your early morning wake up meal or afternoon refresher. Photography courtesy of Cafe Ava Instagram.

Save yourself the airport stress and a couple hundred dollars on a trip to Latin America and head over to the next best thing: Cafe Ava in Cranston.

Family-owned and -operated by Andrea and Derek Cabrera, the duo named the cozy nook in Rolfe Square after their two-year-old daughter, Ava, in hopes of starting a legacy for her name.

“It’s the first-generation dream to open up a business for your family and have that legacy,” says Andrea, adding that she didn’t have mentors to talk to about topics such as this back then, which is something their daughter won’t ever have to worry about.

“We’re doing a lot better than we anticipated,” says Derek, “but even if the cafe fails, Ava could go back when she’s older and say, ‘I have something for myself,’ and it’ll give her confidence and motivation to revive it.”

With the help of Andrea and Derek’s business expertise, their love for travel and Andrea’s mother’s baking talents, it didn’t take long for the cafe to gain popularity amongst Rhode Island residents after its opening on November 29.

Derek has always been the ambitious type. The moment he took a bite of Andrea’s mother’s pastries for the first time, the only thing that was on his mind was how to give her baking skills the exposure they deserved.

“I’ve never tasted a cake like her mom’s. I was like, ‘Wow this woman needs to sell these things and have them showcased!’” says Derek.

Andrea, a New York transplant, noticed a lack of Latin culture during her travels with her husband, especially in certain parts of Rhode Island. “A lot of people are not willing to travel to areas where stuff like this is available because of language or cultural barriers,” says Andrea. “We’re blending a lot of cultures that people have never tried before and are finally willing to because we’re giving them access to it. That’s what inspired us to create a community where anyone is welcome and we can educate people.” 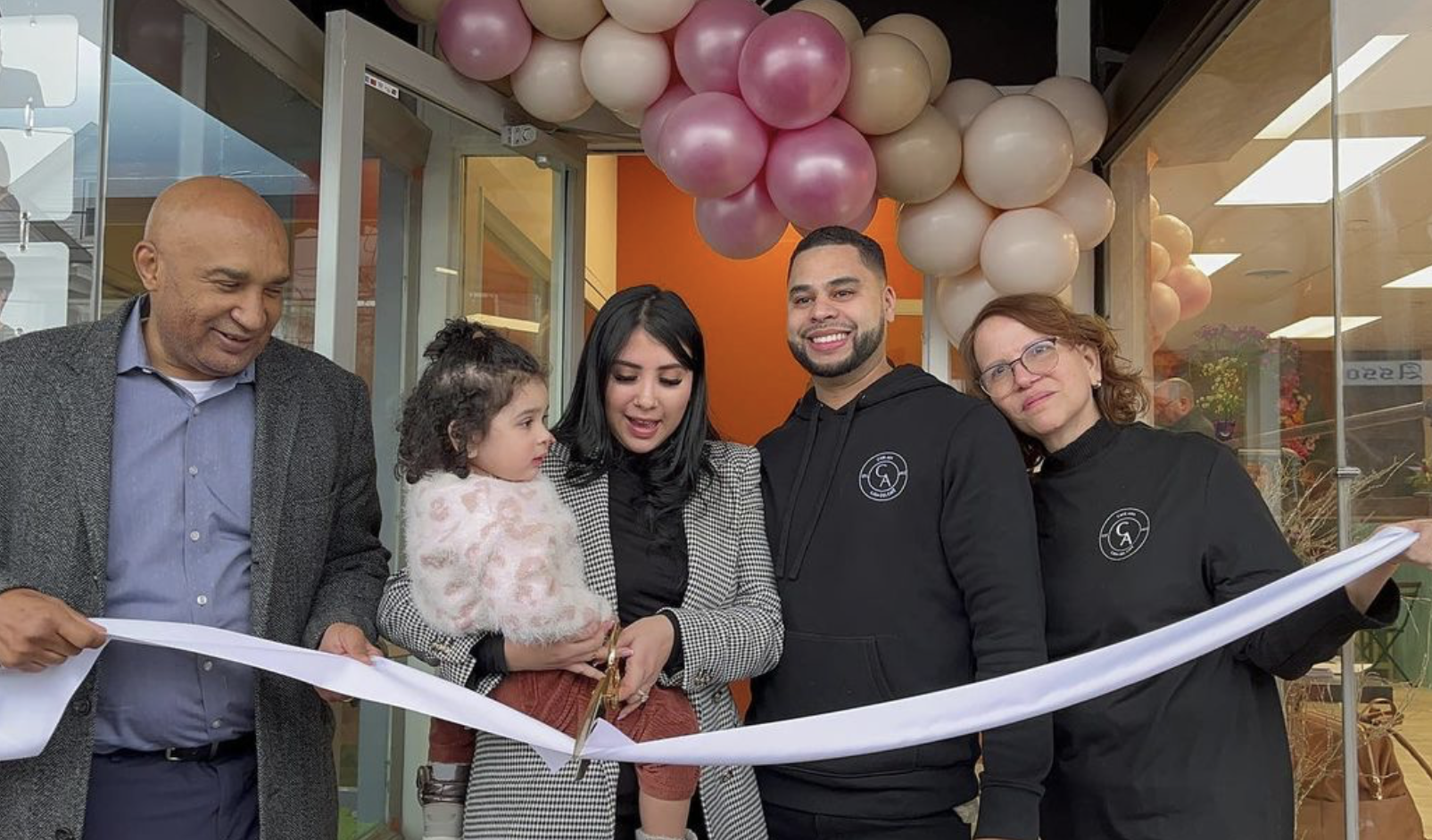 The Cafe’s Vibrant and Intentional Decor

If it’s not the delicious aroma you notice as soon as you step in, it’s the interior design of the shop that elevates your senses; from the portrait of the iconic Frida Kahlo behind the green couch, or the wooden swing ideal for Instagram photos with a coquito latte in hand. Even the cafe’s decor incorporates a couple nods to Latin culture and appreciation for making the best out of what you have.

Derek, who’s been in the real estate scene for seven years, was very intentional with the design of the space. The tiling work on the counter was inspired by a recent trip to Guatemala.

“If you see the pattern of our floor, it looks old and distressed using wood and tile, especially the bar area,” says Derek. “I made the pattern very random and it goes down into the floor… let’s say someone was building it in a different country and all they had was fifteen blue tiles and twenty-five brown tiles. They’re going to make it work with that. If any type of culture comes in here and they say it reminds them of home, that was the goal.” 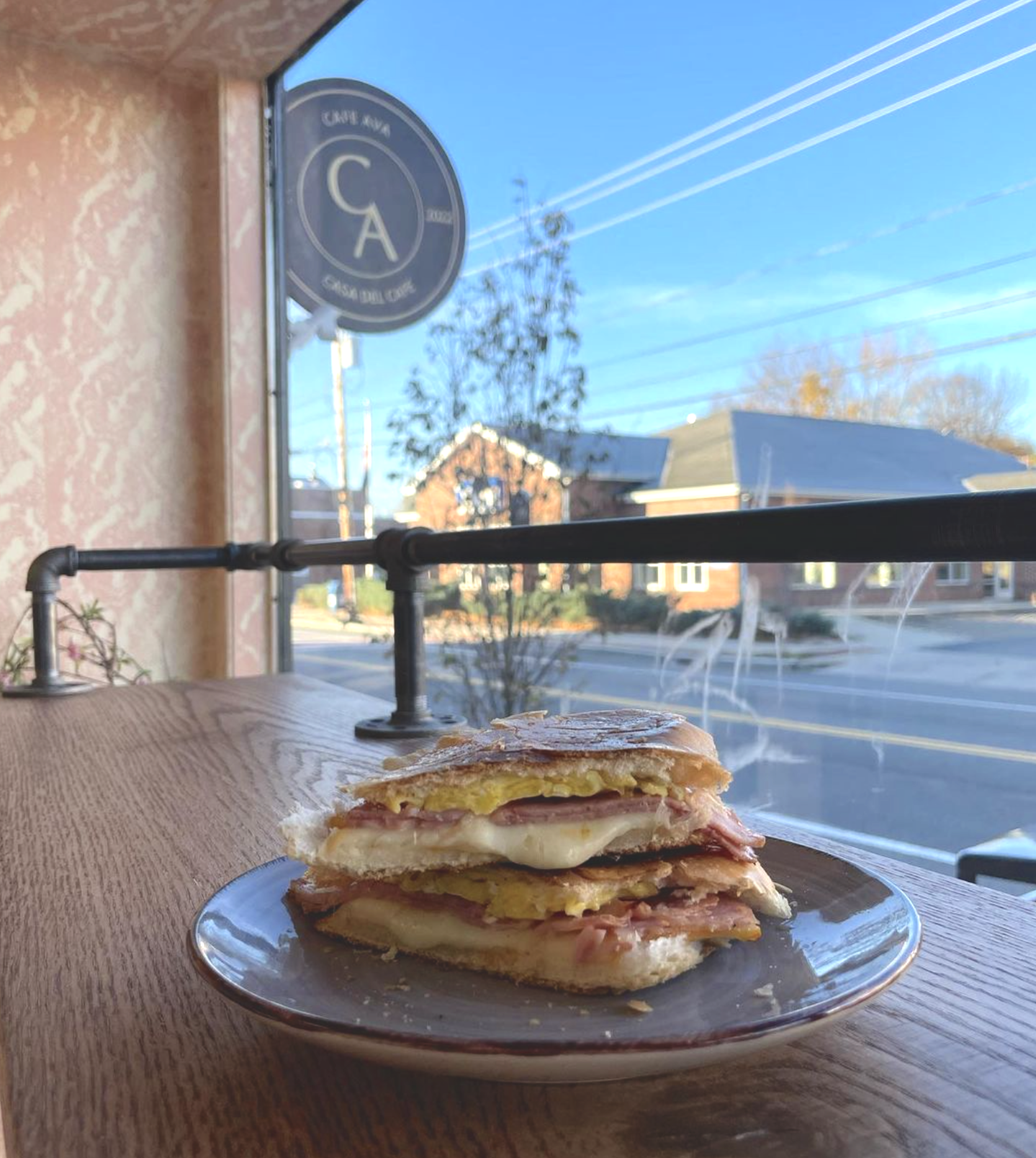 Once the design aspect was completed, Andrea put on the finishing touches and made the walls pop with color and artwork.

“I’m Guatemalan, so I wanted to give a little taste to people without having to travel,” Andrea says. “I love a modern cafe, but we wanted to do something a little different.”

The first thing you should try in Cafe Ava is the arepa, the cafe’s number one seller. If you’re lucky enough to get your hands on one before it sells out, make sure to try the OG breakfast sandwich, made with egg, cheese and ham. If your sweet tooth is beckoning, order an arepa with cheese and condensed milk on top. The arepa can be stuffed with a variety of meats, and they are made fresh every morning along with the other menu items like the blueberry lemon loaf, carrot cake, blueberry ricotta mini cakes and almond cake.

The Cafe Ava crew not only wanted to stay consistent with their “quality over quantity” mantra; they wanted to give people a taste of home.

“There’s meaning behind everything, it’s all thoughtfully curated. With a simple menu, we want everyone to feel welcome,” says Andrea. “I’m Guatemalan, my husband is Dominican… if you go into the different menu items, you’re going to see that the style that we do the arepas is Venezuelan. We have cortaditos which are a Cuban influence. We also have salami which is popular in the Dominican.”

Cafe Ava goes to show that in Latin cultures, many aspects of food and coffee styles overlap and nothing belongs to just one person. Everyone who steps in can feel like there’s a little piece of them inside the shop.

“You can find arepas in Puerto Rico and they’re not Puerto Rican. My mother is Guatemalan but knows how to make Venezuelan arepas, it’s just a blend of all cultures and I think that’s the most important piece of it,” says Andrea.

“We’re a Latin coffee shop; we don’t want to get people confused and think that it’s a Dominican and Guatemalan coffee shop because it’s not – the owners happen to be Guatemalan and Dominican,” Derek adds.

The Future of Cafe Ava

Andrea and Derek hope to expand their cafe with a beer and wine license, then a liquor license, hopefully in the near future. They envision a sophisticated atmosphere with Latin music for dancing and catching up with friends with drinks late into the night, and in the morning, it’s horchata lattes and maybe mimosas on the weekend for brunch.

The duo’s long-term goal is to open multiple cafe locations across Rhode Island and maybe even further. With little Ava already keeping her grandma company in the kitchen, kneading dough for fun and watching her make her famed pastries, she’ll be ready to help her parents in no time.