The food support hub, founded in 2015 in Boston, aims to help Rhode Island small business owners scale up their culinary creations for a national audience. 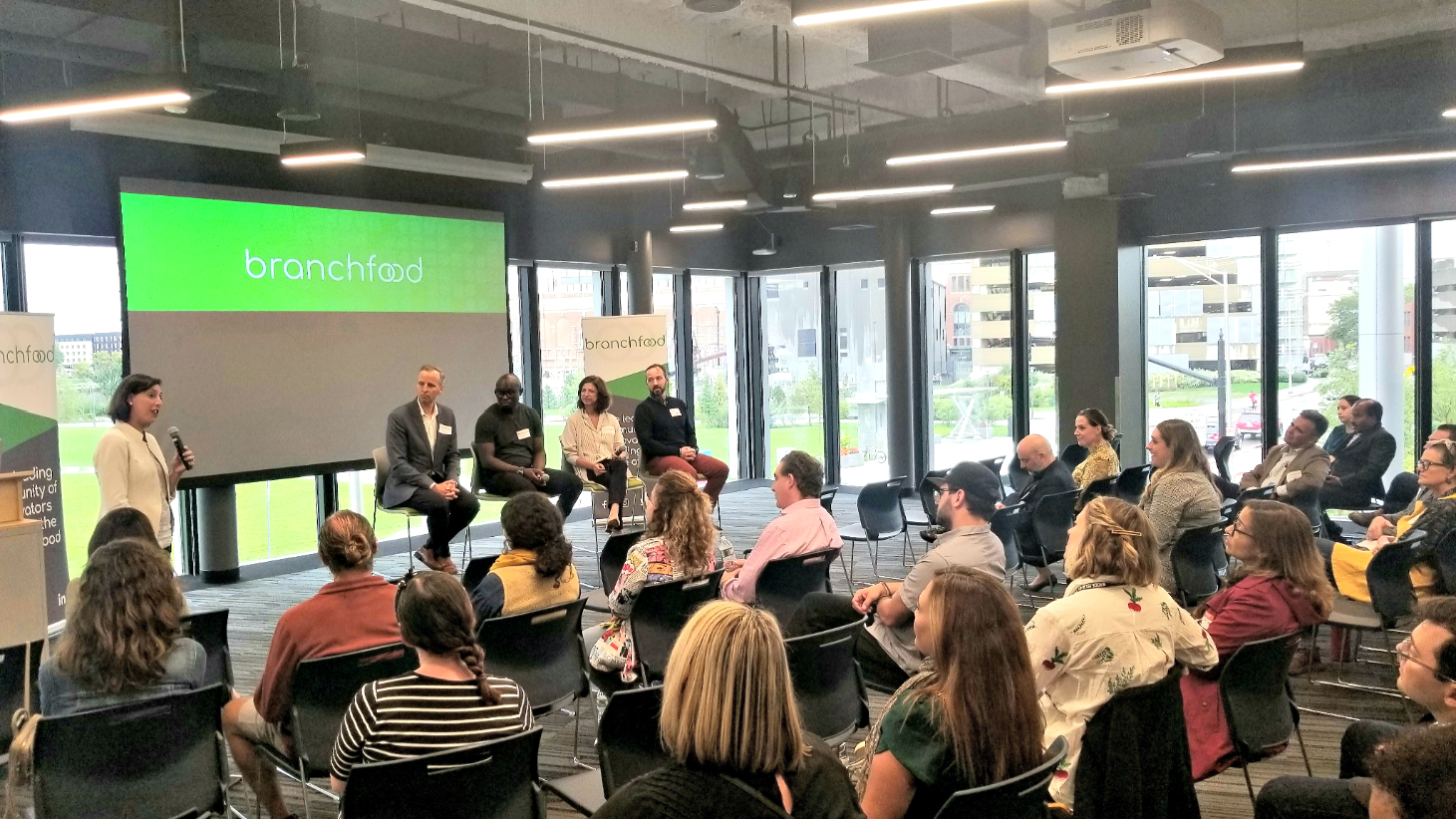 Panelists speak during the Branchfood launch at Venture Cafe in Providence on Thursday, September 22. (Photo by Lauren Clem)

An Ecuadorean wellness tea brewed with herbs and flowers from the Andes Mountains. Pet treats made with leftover produce from facilities manufacturing human food. An AI interface that takes your drive-thru order before you ever interact with an employee.

These are just a few of the products that Branchfood, a food innovation business now making its way to Rhode Island, helped launch in the Boston area. The company, founded in 2015 by CEO Lauren Abda, celebrated the opening of its second location in Providence’s Cambridge Innovation Center this week.

“Branchfood is essentially a launchpad for food innovation,” Abda tells Rhode Island Monthly. “We work to bring together all corners of the industry through curated events, investments, shared workspaces and advisory support to connect innovators and foster growth to transform the food industry.”

The company’s model is to take up-and-coming food businesses and offer networking and other types of support to help them scale production and establish a foothold in the food industry. In addition to their locations in Boston and Providence, the company hosts an annual conference, Food Edge, and manages an investment portfolio of more than a dozen food-based businesses. Since 2015, Abda says, the company has supported more than 800 founders and invested more than $3.3 million through the Branch Venture Group portfolio.

Thursday’s launch was a confluence of the many forces Branchfood is hoping to bring together in Rhode Island — food founders and chefs but also investors, government officials and professionals from related industries. In researching the Rhode Island market, Abda says, they noticed an abundance of incubator hubs like Hope and Main or the Social Enterprise Greenhouse that help launch new start-ups but less support for businesses ready to scale up to the next level of production.

“As we think about our program in Rhode Island, we’re really focused on stage two start-ups,” she says. “These are companies that have graduated from the programs that are already in place at Hope and Main and SEG and RIHub and are at this next stage of development we’re they’re really looking to double down on the specificity around their products or their technology or their service and really understand out how to scale from there.”

“It’s a bit different from our program in Boston, but it’s highly focused on that segment within the food entrepreneurship community,” she adds.

Speakers echoed that need for greater support on Thursday during a panel of local industry leaders. Panelists included Bacaray Diatta, founder of Hope and Main-based Senegalese superfood company Kassumay; Todd Blount, president of Blount Fine Foods; Lisa Raiola, president of Hope and Main; and Nicolas Warren, an angel investor for Branch Venture Group. Speakers discussed the challenges of scaling up to serve national chains and the difficulties of securing investors ready to offer the capital needed for such growth.

Abda says Branchfood chose to expand to Rhode Island in part due to the high level of government support for establishing an innovative food supply network. The company received a $99,600 matching grant from the Rhode Island Commerce Corporation to open the new location in Providence. Abda says they hope to help the state meet its goal of sourcing 50 percent of food from within the New England region by 2050.

“I think with that goal comes a lot of opportunity for innovation to support those goals that we see being done in Rhode Island and neighboring states,” she says. “We happen to think that New England — Massachusetts, Rhode Island and a number of neighboring states — have so much to draw from in terms of the food industry, which is why we’re seeing so much innovation take place in this part of the United States.”

Abda grew up in a Lebanese and Eastern European family, where food, she says, was always central in her home. After watching a relative’s journey to overcome illness through a plant-based diet, she became interested in how food choices affect health. She studied nutrition and food science at the University of Vermont and received a master’s degree in food policy, nutrition and entrepreneurship from Tufts University before working in the Agriculture and Commodities Division at the World Trade Organization.

Returning to Boston in 2013, she founded a Meetup group to connect food innovators. The company later morphed into its current model as a business launchpad for food entrepreneurs. Abda says she looks forward to supporting the already vibrant food network in Rhode Island.

“We’re really excited about what we’ve seen, and I think we will only continue to see the food industry launch new innovators and entrepreneurs that are advancing the industry in important ways that will help achieve greater sustainability and a more environmentally friendly food system,” she says. branchfood.com